Why are there so many Christmas trees in Hallmark’s Hanukkah movies? 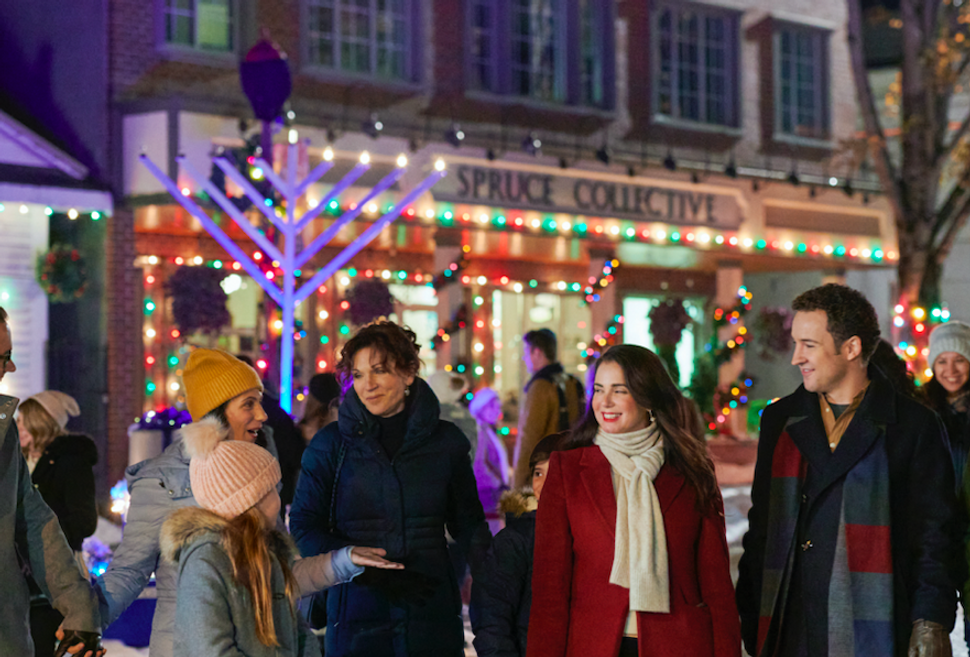 In what seemed like a divinely-ordained response to thousands of Jews pleading for a few shreds of Hanukkah content in a sea of Christmas cheer, the Hallmark Channel added two flicks about the Festival of Lights to its infamously corny line-up of holiday movies.

There was only one problem: The network’s offerings, “Double Holiday” and “Holiday Date,” weren’t really Hanukkah movies. And they certainly weren’t made for Jews.

In fact, both movies feature Christian protagonists semi-reluctantly celebrating Hanukkah after inconveniently falling in love with Jews. While I’m all for more and better representation of interfaith families, as an actual member of one I found little to recognize or like. Though many Jews celebrate both Christmas and Hanukkah, in the Hallmark world the prospect of doing so is both bizarre and unpalatable. What plot tension exists stems from the logistical difficulties of cramming a single blue ornament on a mantelpiece overflowing with Christmas wreaths.

Worse, the moral of both stories is that Jews need to learn to love Christmas. In exchange for learning a blessing or spinning a few dreidels, the Christian characters impose an extravaganza of Yuletide cheer on their new soulmates who, despite living in a society permeated by Christian traditions, know nothing about Christianity’s biggest holiday.

Besides positioning Jews as clueless outsiders and leaning into the misconception that interfaith marriage necessarily erodes Jewish traditions, both movies imply that without significant Christian overtones, Hanukkah holiday content simply isn’t worth watching.

So it’s no surprise that this year’s Hallmark Hanukkah movie, “Love, Lights, Hanukkah” features many more Christmas trees than its title would suggest. Yet it may also be the most Jewish movie in this nascent, vexed genre. In part, that’s because the phrase shayna punim surfaces within the first 15 minutes. In part, it’s because there’s a scene in which a Jewish mother shows off a glass case full of ornamental dreidels purchased during river cruises through Europe. And in part, it’s because that same mother later utters the indelibly Jewish invocation, “Meddle? Who, me?”

But mostly, it’s because the film’s love story revolves around food and guilt.

I won’t lie: In terms of engagement with Jewish themes, “Love, Lights, Hanukkah” gets off to a rocky start. The opening scenes show protagonist Christina Rossi (Mia Kirschner) stocking up on Christmas wreaths while waiting for DNA test results that will reveal her biological family. The Christmas-obsessed owner of an Italian restaurant, Christina is hoping for a big Tuscan clan with a villa in the old country. That fantasy evaporates, to Christina’s visible disappointment, when she finds out her long-lost relatives are in fact Jewish. (Apparently, neither she nor anyone involved in the making of this movie is familiar with “The Garden of the Finzi-Continis.”).

For Christina, the challenge of learning about her new family’s outlandish holiday traditions while still finding time to shop for tacky angel statuettes (seriously, they’re so tacky) is a nearly insurmountable one. Significant dilemmas include whether to sign holiday cards with “Merry Christmas” or “Happy Hanukkah.” The only thing that unites them is work: Christina’s half-siblings, like her, are restaurateurs. But during her first visit to their “sports deli,” whatever that is, Christina encounters family friend David (Ben Savage), a local food critic who just so happens to have panned her restaurant, calling her lasagna “predictable” and “forgettable.”

And because she’s a 23andMe-certified Jew, criticism of her cooking is the one thing that makes her come alive.

Even though Christina is about three minutes into her first rendezvous with family members she’s never met, she immediately confronts David about the lackluster review. In a classically Jewish maneuver, she registers her anger and then pretends to be completely chill with the situation in order to avoid acknowledging his apology. After a dozen repetitions of the phrase “It’s fine, it’s fine,” she’s successfully reduced David to a pile of lasagna-praising pulp.

Because David is the only character to whom Christina is not related, it’s immediately obvious that, by the end of the movie, they will share one chaste kiss and get hitched. In the meantime, Christina does everything she can to ramp up the guilt. She makes him another lasagna and stands over him while he dutifully praises it. She reveals that her cooking was subpar when he visited her restaurant because her adopted mother had died a few weeks before. Every time the inexplicably besotted David says something nice about her, her restaurant, or her Christmas decor, she immediately retorts, “Not too predictable?”

The answer to that question is a resounding yes: Like every character in “Love, Lights, Hanukkah,” Christina is about as spontaneous and vibrant as a stock photo. Presumably to extricate himself from the escalating guilt-trip, David suggests they settle down together and live happily ever after — a proposal Christina finally concedes is sufficiently unpredictable.

Now, if that doesn’t count as embracing your Jewish heritage, what does?

In some ways, “Love, Lights, Hanukkah” is a testament to Hallmark’s Jewish journey. Its predecessors featured straight-up proselytizing, compulsory Christmas cookie baking, and overt caricatures of Jews as rootless cosmopolitans. By contrast, Christina embraces Hanukkah as much as she teaches her new family about Christmas. At times, the movie feels like a step-by-step Hanukkah guide, with introductions to kugel, a latke-making master class, and a tutorial in pronouncing the Hanukkah blessings.

Yet it’s the movie’s educational quality that left me fundamentally confused about its intended audience. Hallmark clearly doesn’t believe that non-Jewish viewers are interested in Hanukkah stories: That’s why there’s a Christmas tree in every scene. On the other hand, with its outsider perspective and clunky descriptions of basic traditions, the movie isn’t geared towards Jews either.

Next year, I’d like a Hallmark Hanukkah movie that speaks directly to Jews rather than “explaining” us to others. But at this point, I’m not holding my breath.

Why are there so many Christmas trees in Hallmark’s Hanukkah movies?