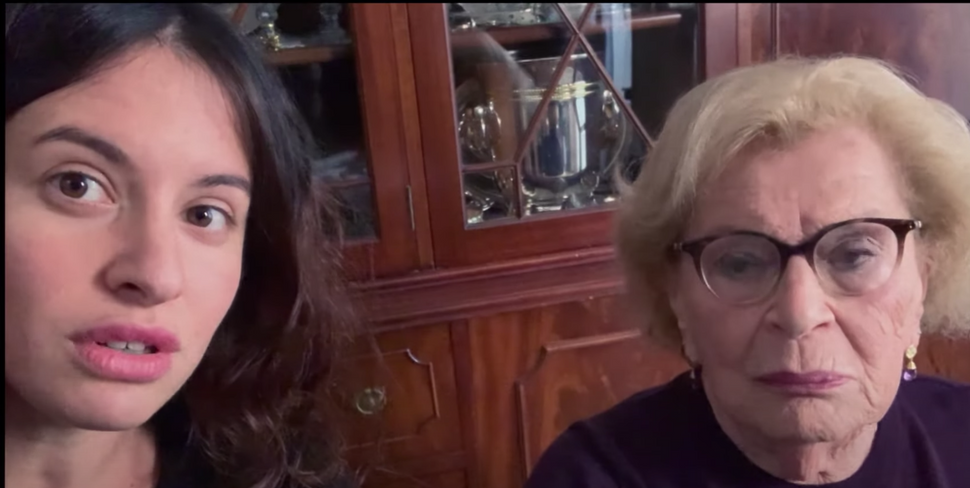 It is rare, I think, to leap from making matzoh balls to making movies. But it is even rarer, I imagine, to land the leap with élan. Yet this is the accomplishment of “Trop d’amour,” a film by a young French actress and filmmaker, Frankie Wallach, starring her grandmother Julia Wallach, the maker of kneidlach and survivor of Auschwitz.

A few years ago, as part of the Grandmothers Project — a series of documentary shorts in which filmmakers’ grandmothers make their favorite recipes — Frankie Wallach, with cameraman in tow, interviewed her mamie in the narrow kitchen of the same Paris apartment where she had lived nearly all of her then-90 years.

As she turns to mixing and rolling the kneidler, Julia, with her sleeves rolled up, asks if the camera has caught her tattoo. Only then does the camera zoom in on her left forearm, inscribed indelibly with a series of blue numbers. Running her finger over it, Frankie remarks that, fading, the numbers seem to have washed off. Stretching out the skin with her other hand, Julia blurts, “No, they’re wrinkled. This skin is 90 years old!”

Both women burst out in laughter, then Julia returns to her kneidler. As for the viewers, they turn their heads in wonder.

When the short went viral — sparking an invitation to present it at film festival in Israel — Frankie Wallach decided to make a film that would be long enough to capture not just her grandmother’s life, but also the family that—having lost her own at Auschwitz — she had created in postwar France. 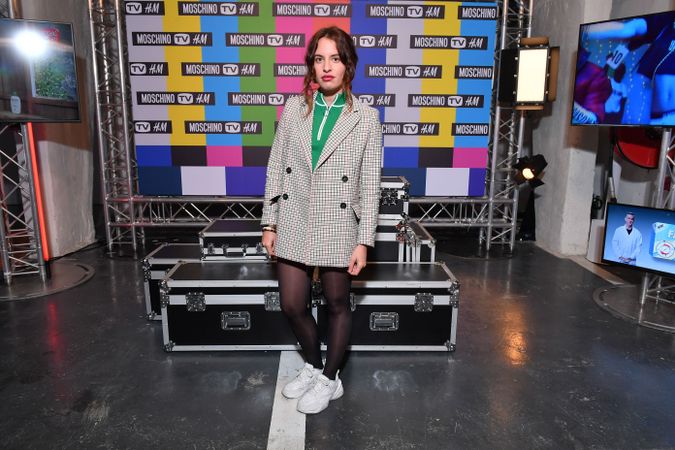 Debut Director: Frankie Wallach decided to make a film that would be long enough to capture not just her grandmother’s life but that of the family she created in postwar France. By Getty Images

It is not too surprising, perhaps, that too much love can achieve so much that otherwise seems unachievable. An absolute beginner as an actress—she had just graduated from a school of theater — the younger Wallach was not even that as a director or producer. Undaunted, she decided to crowdfund the film. Much to her grandmother’s confusion, it turns out. When she announces the campaign on camera to Julia, the latter, perplexed, protests “But people will think we’re broke!”

Yet not only did the effort attract more than 20,000 euros, it also got the attention of high-powered producers. Little did they anticipate, Frankie Wallach confessed in a recent interview, that the film she had sold them — as well as the online funders — would, during its few months of production, morph into something quite different.

In the beginning, at least for Wallach’s film, was Marguerite Duras. On this side of the Atlantic, Duras is best known for “Hiroshima, Mon Amour,” the film she co-wrote in 1958 with the director Alain Resnais. The film helped to launch the New Wave films that would soon sweep over not just France, but also the United States. Or, at least, parts of Greenwich Village. (Full disclosure: I saw the film twice. The first time, as a teenager, I stumbled out of the art house both baffled and embarrassed by my bafflement. How could I not get it? The second time, as an adult, I walked out of the room still baffled, but no longer embarrassed. I had concluded there was nothing to get.)

But this was not the work that impressed the younger Wallach. Instead, it was Duras’ play “Savannah Bay.” With little scenery and, it seems, fewer words — there are, instead, many long silences pregnant with angst and gazes into the middle distance — two characters dwell on a dark event clouded in a mystery which, like the smoke in a tabac, never lifts. (Here I need to make another confession: I haven’t seen the play. But the former New York Times theater critic, Christopher Isherwood, did. In his review, he described it is “Ponderous. Obscure. Pretentious. French.”

What attracted Wallach were the play’s two characters — an old woman, Madeleine, and a young woman, helpfully identified as “Jeune femme” — and the gravitational hold the past exercises on them. This relationship, Wallach realized, depicted her own with her grandmother. But the past for the latter, while indescribably dark, was not mysterious. Instead, the experience of the Shoah is a meticulously studied historical event, but also a tear in the fabric of history. For the child Julia Wallach, this event, this tear, spans her arrest by gendarmes in Paris during the infamous round-up of 1942, the voyage to Auschwitz in the same cattle car as her father, and the Death March toward Germany in 1945.

The film respects the horrors of the past, while also reaffirming hopes for the future. From the moment Julia Wallach, while her granddaughter trains her iPhone on her, grandly steps out of a hall closet, takes a bow and erupts into laughter, the film has as much to do with Duras as shmaltz has to do with Crisco. The film’s New Wavey plot concerns a jeune femme who is, évidemment, making a film about her grandmother. In the process, she processes painful, yet cathartic truths about her family.

While sometimes scattershot, the film can often be funny and genuinely moving. A climactic argument between daughter and father manages to be both — all the more so as Frankie Wallach stars as herself, while her father does a remarkable turn as, well, her father. Other family members are played by mostly young and unknown actors, who cohere not just as an ensemble, but as a family — the vrai-faux Wallach clan. While the story at times seems improvised and uncertain, it is never Ponderous or Pretentious. But it is very French.

So, too, is Julia Wallach. Yet she is also a force greater than any single language or land. In every sense of the word, she is formidable. Along with the identification number, half of a Star of David is etched on Wallach’s forearm. But with this movie, a different and complete star is born.