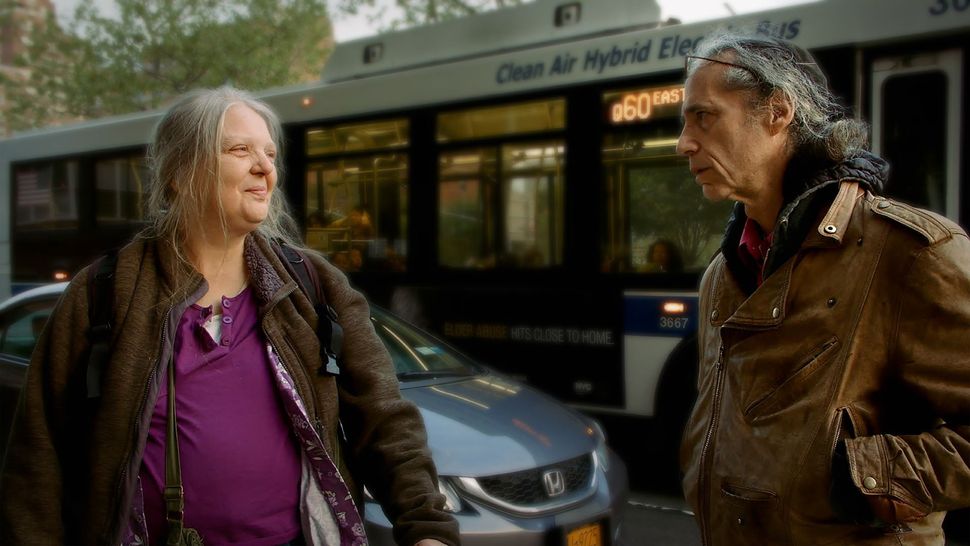 The first thing I did after finishing “Charm Circle” was clean my room.

Named for a patch of Kew Garden Hills in Queens, NY, where red brick semidetached homes form a pseudo suburb, the documentary by Nira Burstein is as intimate — and dirty — as filmmaking gets.

Burstein follows her parents, Uri and Raya, from their overmortgaged house, stained with mold and cigarette smoke and home to at least three cats. The detritus is a ready-made metaphor for the family’s dysfunction, the roots of which lie in unresolved mental illness and deferred dreams .

Marketing suggests Burstein’s film has much in common with the Maysles Brothers’ “Grey Gardens,” a comparison no doubt helped along by one of the executive producers, Fred Armisen, who himself lovingly spoofed that flick on his IFC show “Documentary Now.” It’s a hazardous comparison, revealing the ways in which “Charm Circle” is too messy and too neat to warrant such praise.

To begin with, Burstein’s approach, unlike the Maysles’, is, rightfully, far from detached. She’s revealed through home video as the ersatz caretaker to her father and sisters through much of her childhood, while Raya was out of the home receiving care for her mental illness — diagnosed variously as bipolar disorder, schizoaffective disorder and schizophrenia. (It should go without saying that the Maysles had a bit less shared territory with a Bouvier clan in exile.)

Burstein knows her parents and sisters, one of whom, Judy, is developmentally disabled (as Uri remarks, “Oliver Sacks couldn’t figure out what the fuck was wrong with her”). The other, Adina, lives in Olympia, Washington and is preparing to get married to two nonbinary people in a triple wedding. Burstein’s familiarity is a strength, allowing for unvarnished scenes and moments of extreme candor that a crew of strangers could never hope to capture.

At one point Raya, having just lost her job as a school occupational therapist, admits to Burstein that she once considered killing Uri and herself, but stopped at the thought of leaving her children orphaned. She still feels horrible for thinking of it.

After a moment, Burstein says “You’re not alone, because I imagine that happening with you two. I can’t tell you how many times. It’s like I’m always preparing myself for you guys to die.”

The exchange, like the film as a whole, raises questions about methodology and what story is really being told — and why.

By themselves Raya, and particularly Uri, a histrionic former realtor and amateur musician with a stringy ponytail topped by a kippah, are fascinating characters. The house, called the Glass House, for the family that lived there before the Bursteins might well carry the weight of a million similar homes in America, purchased for a better life that was then scuttled by the stresses and expenses of healthcare. But the film can never fully escape the trappings of a therapeutic exercise. The catharsis of the filmmaker doesn’t translate into an emotionally fulfilling experience for the viewer. And not for the reason you might think.

If anything, Burstein’s filmmaking is too self-aware in its storytelling and too inclined to make the mess of life orderly at the expense of her own investment in the story being told. Even as the fly strips accumulate and Uri, who clings to flexible, but ostensibly strict, halachic values, wavers over blessing Adina’s unconventional union, the story flows to an inevitable conclusion that has more to do with real estate than real closure.

“Charm Circle” is at its best when it digs into the guilt and grudges that Burstein is enmeshed in and at its worst when she attempts to step back, to achieve some level of greater objectivity.

Twice in the film Burstein asks her parents why the house is a mess. It’s a wrong question: a director’s, not a daughter’s. She never gets an answer, but then, she already knows it.