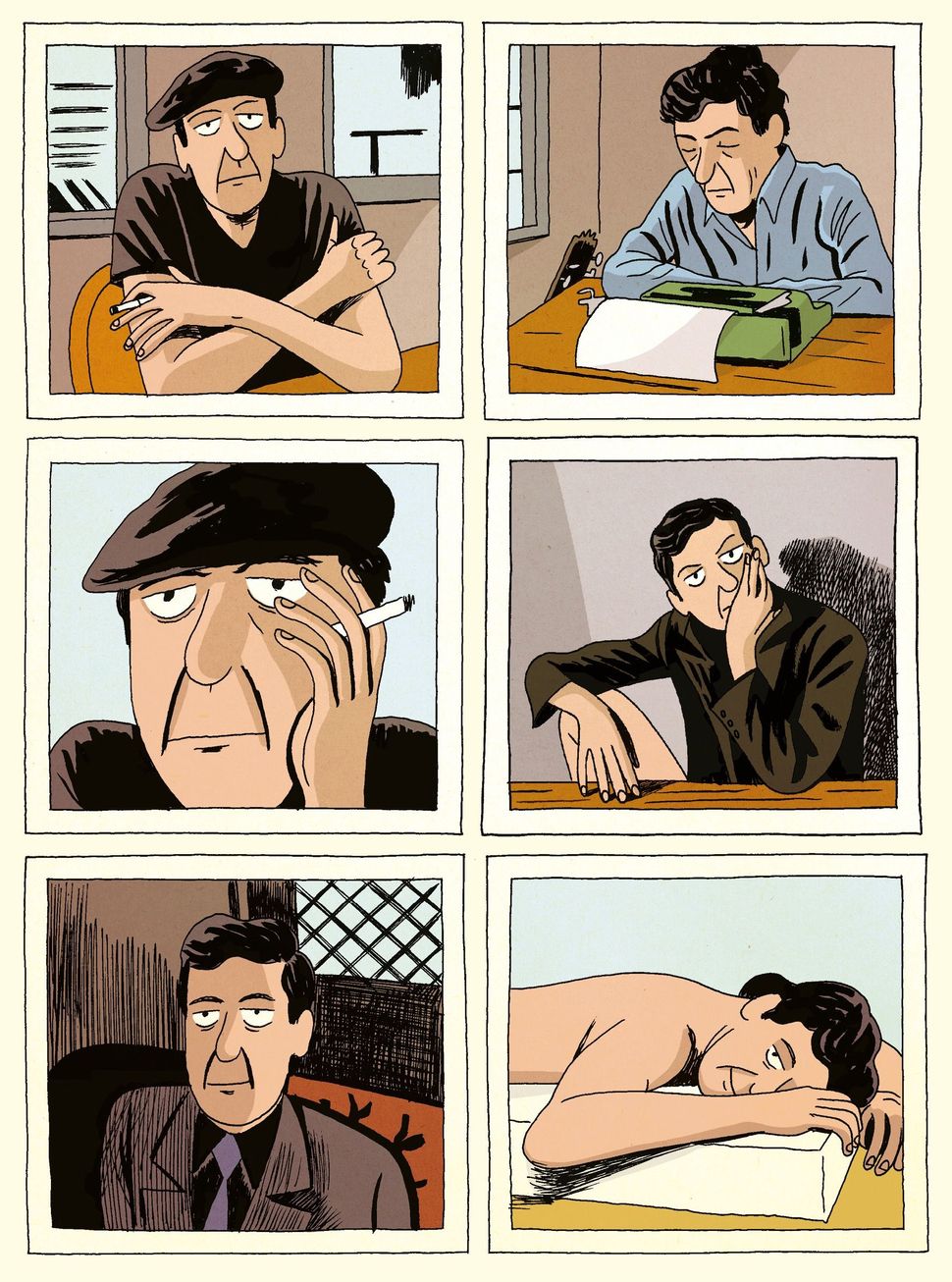 What did Leonard Cohen see at the moment of his death?

No one can say for sure. But it’s possible he was thinking about the time he found his childhood dog dead beneath a neighbor’s porch. Or his cameo on “Miami Vice.” Or his final recording session with his son, Adam. There was a lot of life to reflect on.

Philippe Girard’s new graphic novel “Leonard Cohen: On a Wire,” originally in French and now in English translation, imagines the late poet and musician’s thoughts during his dying minutes. Yet, despite this framing device, and Cohen’s own preoccupation with death, the book isn’t an elegy but a celebration. Moving at a breakneck pace, Girard offers a portrait of the artist as a young and not-so-young man, drawing on Cohen’s creative inspirations, frustrations and personal tragedies.

Cohen’s meetings with muses and record executives — and a homicidal Phil Spector — are complemented by snapshots of his 1973 visit to Israel during the Yom Kippur War and his life on Mt. Baldy and his marriage to Suzanne Elrod. Drawn simply but expressively, this Cohen delivers arch bon mots, wryly lamenting his lack of success and, finally, finding himself humbled by late accolades.

Girard, the author of over a dozen graphic novels and comics, witnessed one belated appreciation of Cohen during a concert in Quebec City in 2012.

“After I think three songs, he stopped the show and said, ‘If I knew you’d love me that much, I would have come sooner,’” Girard recalled. “It was a bit of a shock for me. I realized that maybe he had suffered a loss of affection from his own people.”

Cohen’s words kickstarted Girard’s interest in him as an artist whose work often went unheralded or, in the case of his biggest hit, “Hallelujah,” became successful on someone else’s terms. Girard devoured every book and interview he could find on the late Bard of Westmount, and, while he makes no claim to anything definitive, he hopes “his Leonard” comes close to the truth. Ultimately though, he just hopes his graphic novel gets people to go back to their turntables and spin “The Future” (his favorite album, at least this week).

I spoke with Girard over Zoom about his process, drawing Leonard Cohen in his underwear and why his book is structured like a Star of David. The following conversation has been edited for length and clarity.

PJ Grisar: Can you tell me a bit about your connection to Cohen? 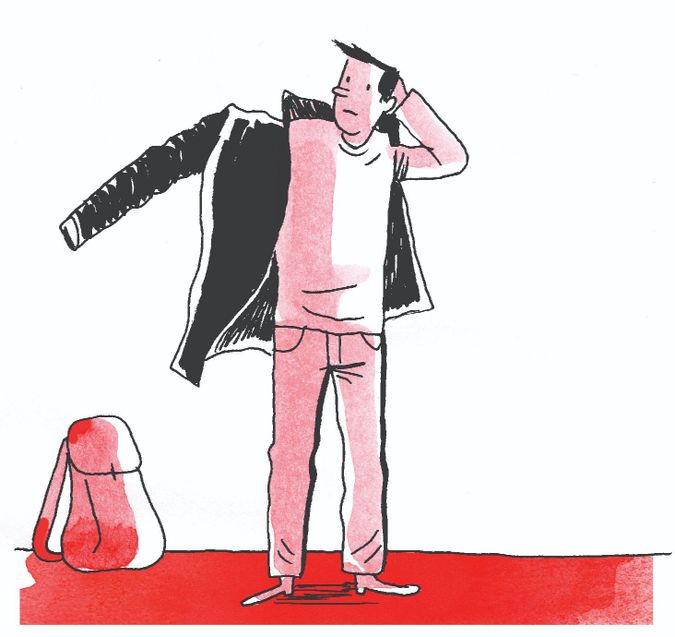 Philippe Girard: I’m from Quebec City, so maybe I came a bit late in the game as far as Cohen is involved. I saw him only once in a show — it was in 2012. I began to think about him probably somewhere around these days. Of course I had the records. I really love his music. But the guy was a bit of a mystery for me. I didn’t know much about his private life.

Did your research lead you to write the book or did you get the idea first?

2016 was a shitty year for me because David Bowie passed away and Leonard Cohen passed away. And those two musicians are the most important musicians in my life. When Bowie passed away, a couple of months later a book came out. And I was a bit disappointed with it. I thought, well, something similar will happen with Cohen I’m sure and I’m going to be disappointed. And then the months came by and no books came out. I felt like this was a beautiful subject. Like a fantastic, beautiful flower in the garden that is only waiting to be picked, but nobody seemed to be willing to pick it. So I said, “All right, I’ll do it. I’ll do it my way. And it’ll be up to my standards.” I had literally piles of notes and photos and lots of stuff, sketches on my drawing table. It came up pretty naturally, actually.

Do you start with a script or with sketches?

Most of the time I draw a storyboard, but in the case of Cohen, he said himself that he led like 1,000 lives and that’s something that is pretty obvious when you read about him. There’s so much stuff to be said that I had to focus on a few things. For some reason, and I don’t know why, I drew a Star of David on a blank sheet of paper on a poster board, and I decided that each point of the star would be dedicated to one decade. And for each decade, I would have one woman, one object, and one song and Leonard’s death was at the center of the star. 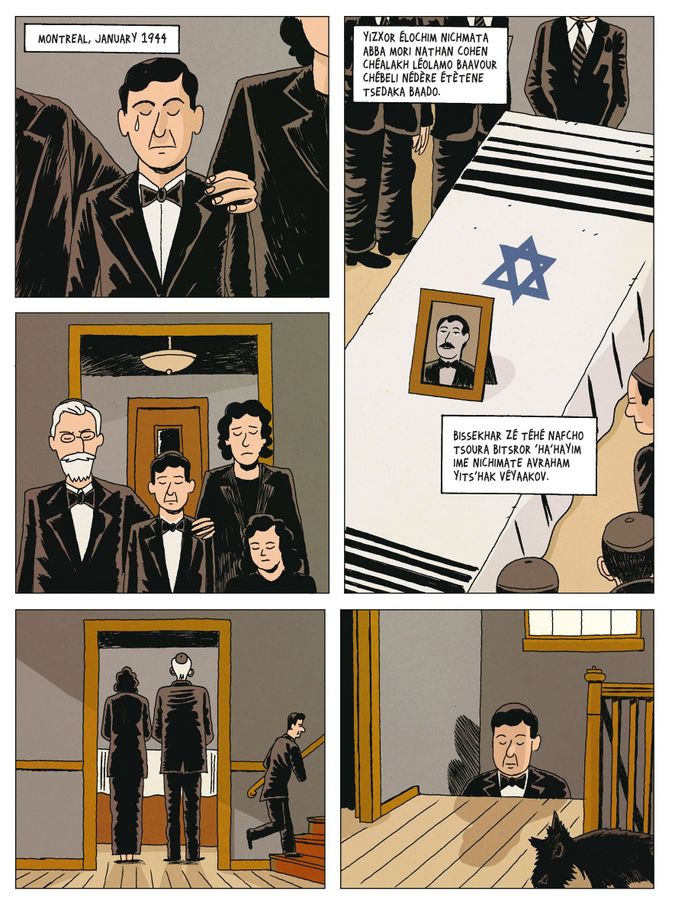 Young Leonard at the funeral of his father, Nathan. Image by Drawn & Quarterly, Philippe Girard

Did you learn a lot about Judaism through writing this?

A lot. In Quebec City, from what I know, there isn’t any Jewish community, or if there is it’s not like Montreal. It’s discreet and everybody here speaks French. It’s a different kind of dynamic than in Montreal. I learned a lot about Judaism. The sense of community is one of the things that struck me very strongly, and the resilience, of course. While I was doing the colors for my book, I had a residence in Poland in Krakow and it wasn’t a nice trip. I was dumped there in an apartment for one month and nobody took care of me. I had a schedule, but we did nothing. So up to a certain point, I decided that I would have to take care of my own schedule. So I went in the concentration camps. I went to see the Jewish ghetto in Krakow, but also in Warsaw. Leonard was with me all the time. And I was really sensitive about all this. I’m talking to you about it now and I have shivers. 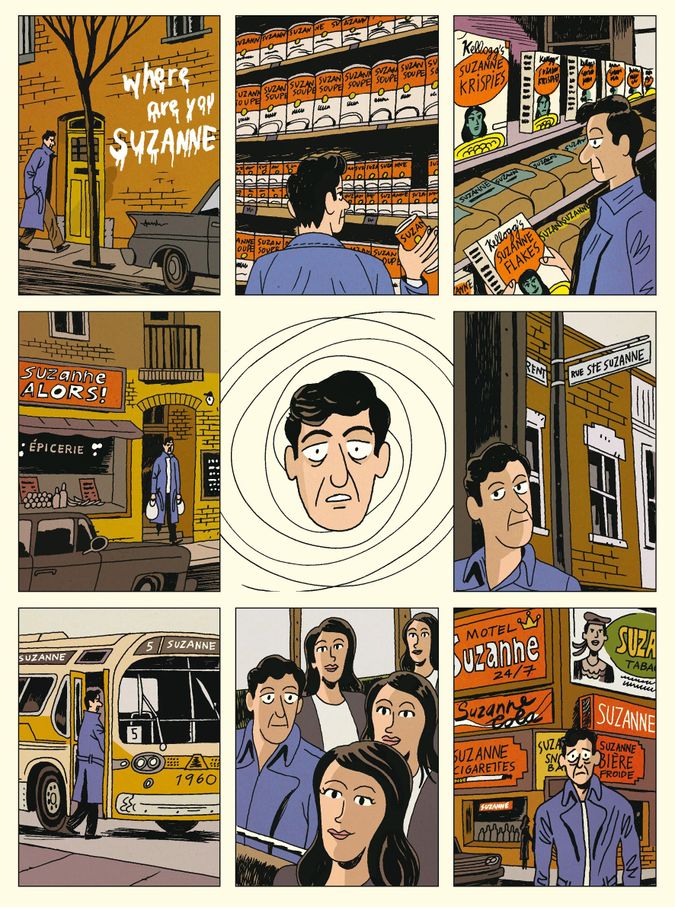 Cohen, after meeting Suzanne Verdal, sees her everywhere. Soon, she’ll be the basis for a hit song, first as performed by Judy Collins, and later by Cohen himself. Image by Drawn & Quarterly, English translation by Helge Dascher and Karen Houle, Philippe Girard

It’s interesting how his appeal is so universal. It may be my bias but I find his work is richer if you know some of the ideas behind it.

Before making the book I knew that he was Jewish, but somehow I had forgotten. I was focusing on something else. And then when I started to read about him, even when he was a child, it’s something that was in his dynamic. It was a part of him, and he used it as leverage to make something special and something unique. Maybe it’s one of the special ingredients that made him so special. 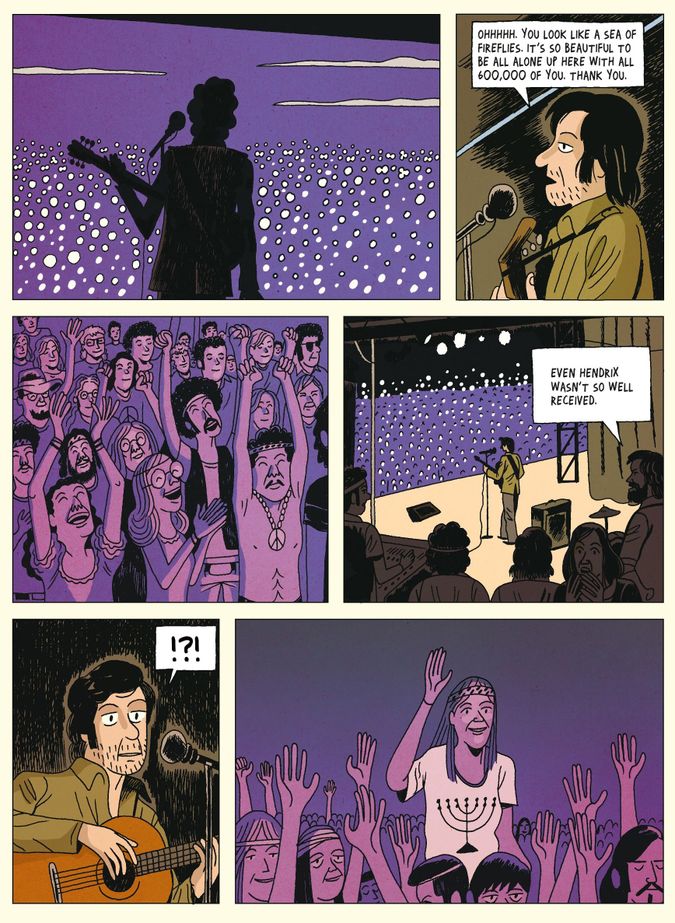 When you were working were you listening to the music?

All the time. My girlfriend told me, “Gee, I’m gonna listen to Leonard Cohen for two years. I can’t stand it anymore!”

Do you work mostly from a tablet or computer?

I draw everything on paper. My originals are pretty small — 9 by 12 — drawn on paper with a not-so-special kind of pen. The kind of pen that you probably use to sign your checks. I use these pens. (Holds up a pen.) It’s really common. It’s an ONYX uni-ball. I think they cost $2. And then once the black and white is done, I scan the pages. And then I make the colors on Photoshop. But I try to use the computer as little as possible. For me the fun of drawing is something close to what it was when I was a kid. My mother used to put me somewhere in the corner of a room with crayons and a piece of paper and you know, “Be quiet. I have to prepare dinner.” So it’s something that I’m trying to find again, even though I’m an adult now. I remember the special feeling that it was back then and I’m trying to get back to it. 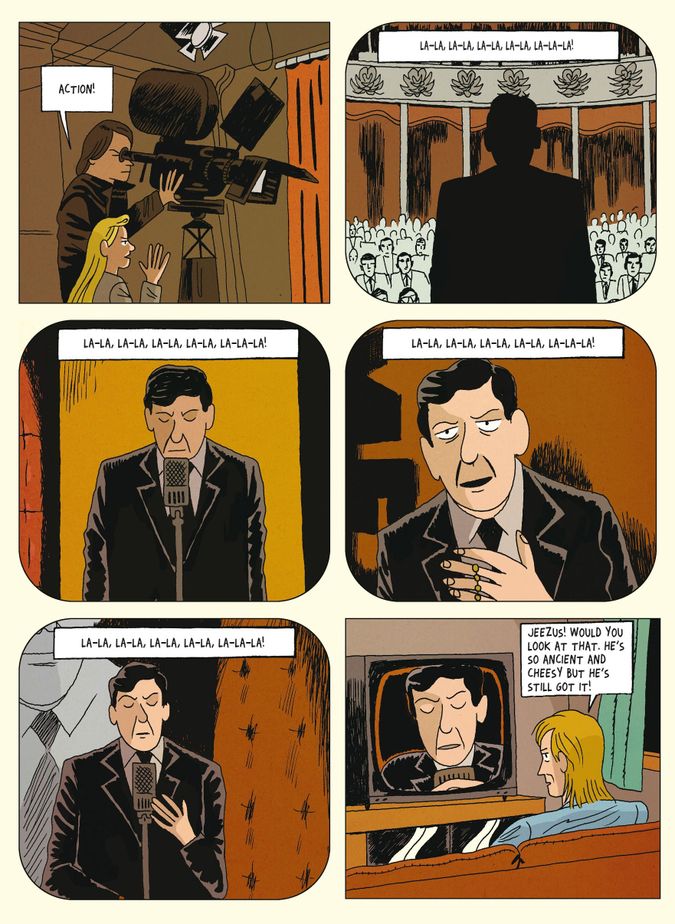 Cohen films the music video for “Dance Me to the End of Love.” Image by Drawn & Quarterly, English translation by Helge Dascher and Karen Houle, Philippe Girard

That reminds me a bit of where the book stops: this memory of Cohen’s childhood, the famous story of him burying a line of poetry in his father’s bowtie after his funeral. We see Leonard’s mother saying that “he’s working out his mythology.” What do you think that mythology is?

My job is to ask questions, not to answer them. What’s his mythology? For me, it’s a code, really, so it’s something you have to decipher. And I think Montreal is a big part of it. And the fact that he was an Anglophone in a French-speaking environment, and dealing with multiple cultural personalities. And of course, depression — that’s another important aspect of his work and his personality of course.

He’s sort of like Forrest Gump in this. I mean, there’s that one page where he meets Lou Reed, and then on the next he’s in bed with Janis Joplin. And then the next page with Joni Mitchell. In three pages!

When you make comics these days one of the things that you understand pretty quickly is that you have to draw cars, buildings and naked people. I spoke with a journalist from the Montreal Gazette last week, and he said, “Oh, I’ve been mildly shocked by that many naked people in your book.” And I thought “it’s not my choice! Leonard made his own choices. That was his life. Don’t look at me!” 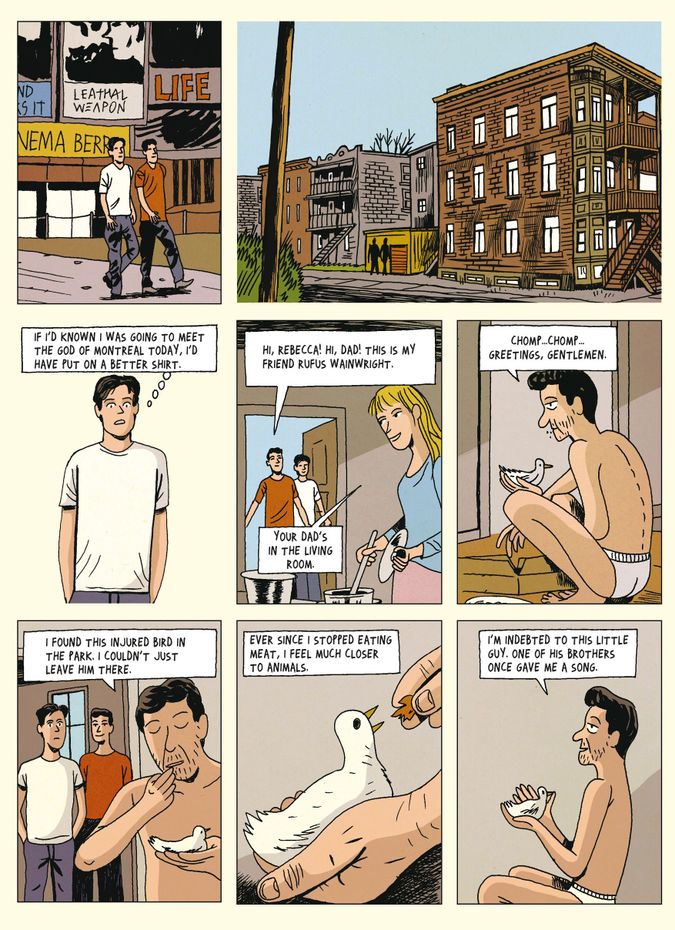 But there are also some obvious reference photos here of him with Marianne Ihlen or photos by Dominique Issermann, a photographer and one of his lovers.

This is the story of my Leonard. So he’s probably a bit different than the original, even though I spoke with Issermann. She called me after the book was published. And she told me “when you draw him in his underwear, playing guitar or feeding the bird, you nailed it perfectly.” So, you know, I gave myself license, but still I think I’m pretty close to the original. Just to talk about those famous pictures. I decided to put a few here and there to make sure that people understood that I was serious about the work. 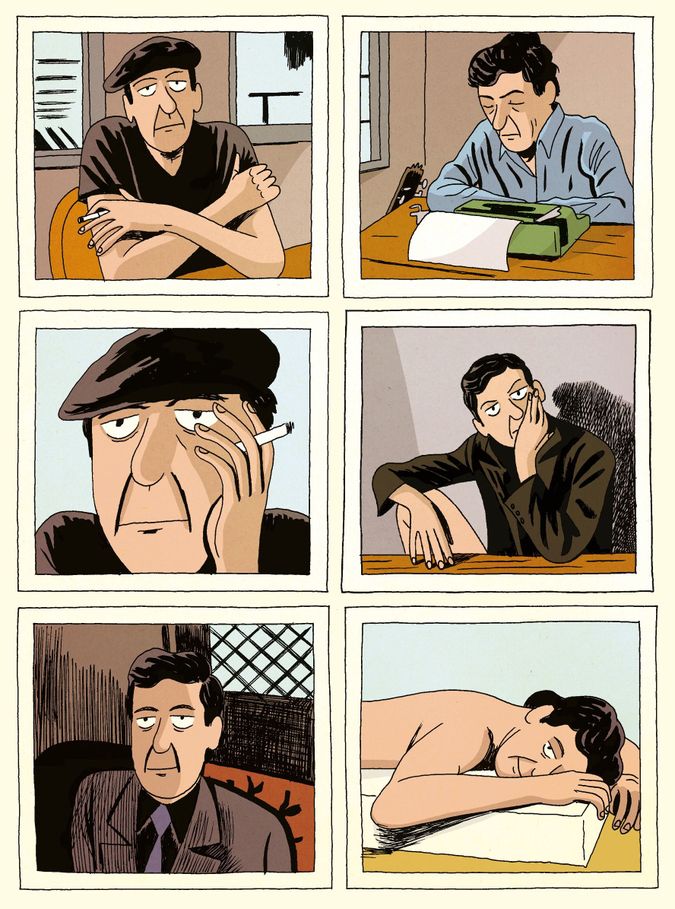 The bibliography at the end is a great resource for anybody who wants to use this as a springboard to reading more.

Why not? It wasn’t the goal, I was just hoping that people would go back or maybe just go to his music.