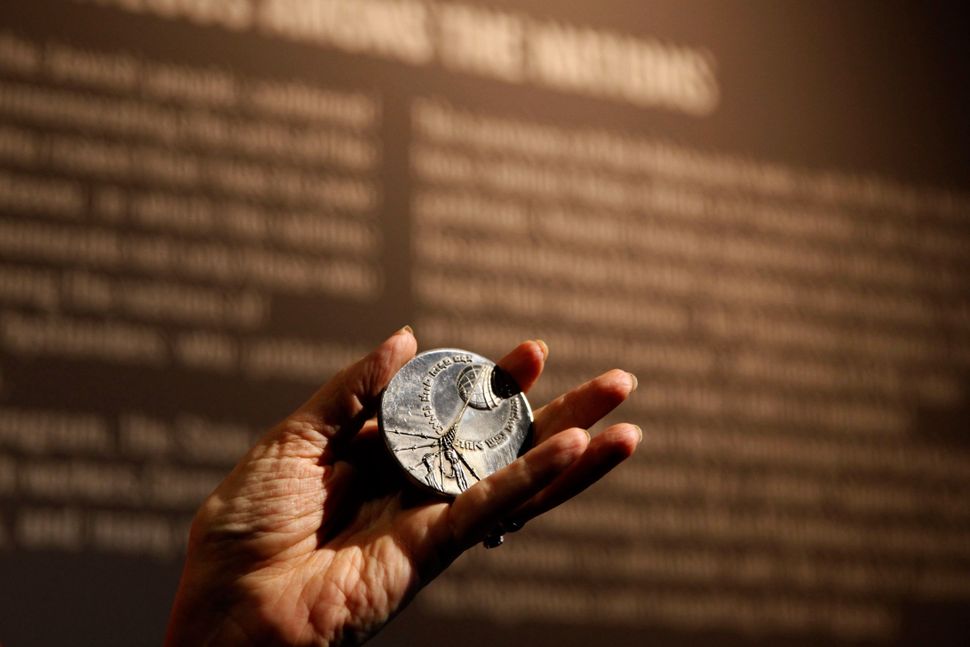 Posthumous Honor: Irena Steinfeldt the director of the Righteous Among the Nations department at the Yad Vashem Holocaust memorial Museum, holds the “Righteous Among The Nations,” medal, which is given to non-Jews who stood up to the Nazi genocide during the war, that was awarded to late Egyptian Dr Mohammed Helmy on September 30, 2013 in Jerusalem. By Getty Images

Ronen Steinke, a German Jewish lawyer and journalist at the Süddeutsche Zeitung, has worked at the International Criminal Tribunal for the former Yugoslavia. His books include a study of the political function of war crimes tribunals since 1945 and a biography of Fritz Bauer, the German Jewish judge and prosecutor instrumental in the postwar capture of Nazi Adolf Eichmann. Steinke’s “Terror against Jews: How Anti-Semitic Violence Wins and the State is Failing” was published last year.

Steinke’s “Anna and Dr. Helmy” (Oxford University Press) tells the story of the Egyptian doctor Mohamed Helmy, who saved Jews in Berlin during the Nazi era, thereby becoming the sole Arab to be honored as Righteous Among the Nations by Yad Vashem, Israel’s memorial to Holocaust victims. Recently Steinke spoke to Benjamin Ivry from his home in Berlin about Dr. Helmy’s achievements.

Dr. Mohamed Helmy saved some Jewish patients in Berlin, including Anna Boros’s family, by hiding them from the Nazis. Your book states that a “considerable number” of Muslims living in Berlin “played a special role in resisting the persecution of Jews in Berlin.” Do we know how many?

No, we don’t really have an idea, because the Arabs who were on the side of the Nazis were on that side in a very public way, but the ones who were secretly helping Jews didn’t seek the limelight, obviously. They acted in a clandestine fashion, so it is much harder to find traces of them. I was able to find cases of at least a dozen Arabs in Berlin, but I’m sure there are many other stories yet to be discovered. 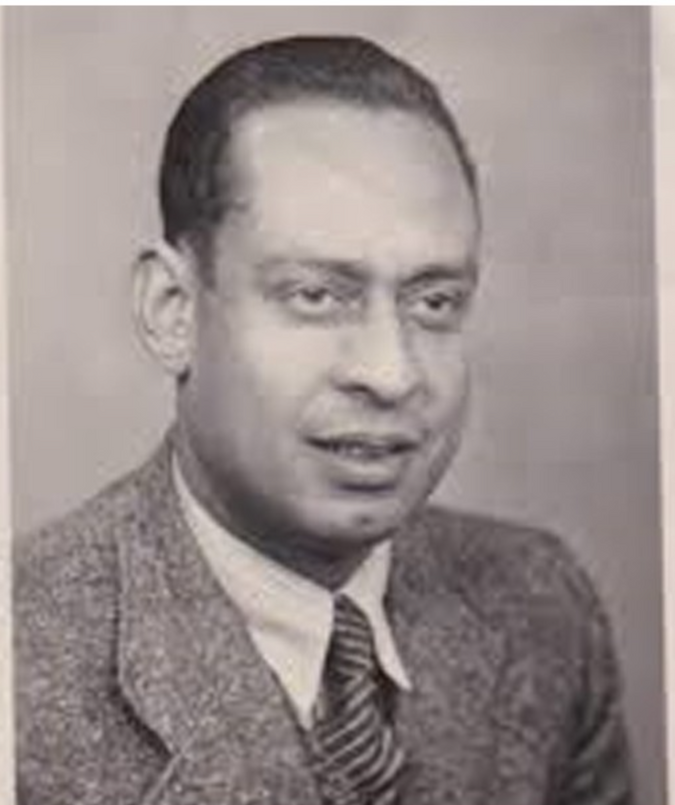 Cover Story: Helmy was able to save Jews by creating the illusion that he belonged to a powerful family in Egypt. By Wikimedia Commons

Isn’t the experience of Dr. Helmy and the Jews he saved unrepresentative historically?

Yes, you’re right. Obviously, we should be cautious about generalizing from one single story. But in his affection and warm relations with the Jewish community, Helmy was representative. Arab immigrants to Germany at the start of the 20th century shared a position as a highly-educated minority with Jews. Jewish tradition speaks positively of the Golden Age of Arab culture in Spain, and the Arab hosts liked their friends in the Jewish community.

In wartime Europe, a competent doctor was especially valuable. Could this be why Dr. Helmy was not murdered after the Germans were informed that he was helping Jews?

Yes, I’m sure that’s part of it, but another big part was the political interest of the Nazis in keeping as friendly as possible with the Arab world. Helmly, as a convincing liar and good trickster, was able to create the illusion that he belonged to a powerful family in Egypt. And this was one of his clever tricks, because although he came from a military background, he was no longer in contact with his family and he himself did not have any influence in Egypt.

Anna didn’t enjoy her temporary Muslim identity or wish to prolong it after wartime? TV miniseries scriptwriters might look for romance in Anna’s participating in a Muslim wedding ceremony to further her disguise, but this was no time for flirtation, right?

No, none of this was real. All of this was con artistry. And for Anna, it was her hope that she would save her life through this. None of the motions she went through were expressions of her feelings, religious or otherwise. She pretended to convert to Islam, but it was clear to the Muslims who saved her that this was not sincere. No one expected her to behave as a Muslim or continue living like a Muslim after the war. Helmy who devised the plan, although he was Muslim, was not a religious man, so he did not place much emphasis on Islam.

After the war, Dr. Helmy married his German fiancée but they chose not to have any children, reportedly because they didn’t want them to experience the horrors of war. Given Dr. Helmy’s final conclusions about humanity’s evil, can his story be described as a feel-good tale with a happy ending? A few Jews were saved, but overall, people are unredeemable.

Absolutely. Like you, I find it very hard to speak of a happy end. A girl and her family have survived, but her country is in ruins, and everything she grew up with was destroyed. I resist the kitsch conclusion that they lived happily ever after, because they didn’t. Anna was an extremely strong personality. She was someone who was resilient, and not many people are. There was already terrible tension in her family, and this experience of hiding did not bond them together. They emerged from the experience with even more tension. Unlike the story of Anne Frank, where being in hiding brought a family closer together, this was not the case for Anna and her family.

Descendants of Dr. Helmy located in Egypt refused to be associated with the Yad Vashem honor due to anti-Israel feeling in their homeland. A great-nephew was found, also a physician, who was willing to attend a ceremony at the German consulate, rather than at Yad Vashem itself. This relative suggested that a Helmy museum might be opened in Berlin. In today’s Egypt, would it be realistic to expect a museum honoring an Egyptian who saved Jews?

Sadly, the atmosphere is totally toxic when it comes to Israel or even Jews, and it’s totally antisemitic. I traveled to Cairo and spent four days and evenings with the [Helmy] family to understand their reservations against Yad Vashem, and understood that they have something to lose. They stand to lose social prestige and might have career problems if they are publicly associated with Jews. It’s a sad and outrageous fact, but it’s the reality in present-day Cairo. So they weren’t really free to speak their minds. The only member of the family willing to come to Berlin and speak about Dr. Helmy was over 80 and has nothing to lose. He’s had his career and has his wealth and a home, so he has nothing to fear from repercussions.

Many writers have commented that so far there is only one Arab among the Righteous Among the Nations. Yet there are dozens of Muslims among the Righteous, notably from Albania, and Persians, who of course are not Arabs. Some Arabs avoided later recognition, especially if they lived in places where Jews continued to be persecuted.

Sadly that’s true, but still, there are documented cases from other Arab countries, like Morocco and Tunisia, which historians agree deserve to be recognize as Righteous, but Yad Vashem has not concurred. Helmy did not make a fuss after the war, perhaps because he was modest, and his family after the war did not want to be recognized as a family that saved Jews. I think Yad Vashem deserves some criticism here. Arabs don’t want to remember and preserve this story, and Yad Vashem shows great reluctance to recognize Arab achievement because of present-day political tension. There are tougher standards for Arabs to be named among the Righteous than for Ukrainians, for example. We should use these stories to build bridges.