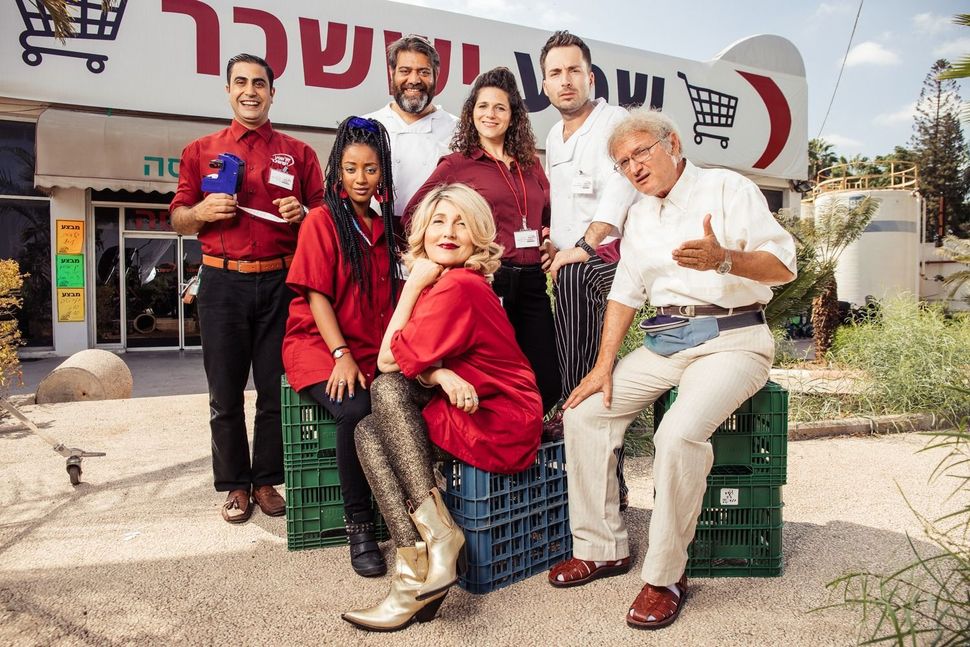 The cast of “Checkout” pose in front of their store. Image by ChaiFlicks

Americans seem to have a growing obsession with shows about Haredi Jews, whether that’s “Shtisel,” “Unorthodox,” or “My Unorthodox Life,” all on Netflix. Meanwhile, Israeli shows such as “Fauda,” which delves into the violence and drama of the Israeli-Palestinian conflict with Mossad spies and Hamas bombs, have also been hits.

But will that same interest cross over to the lives of more average Israelis?

ChaiFlicks, a streaming site specializing in Jewish and Israeli content, is betting that the answer is yes; they’re releasing three seasons of “Checkout,” an Israeli hit comedy, on Thursday, subtitled for English-speaking audiences. The show, created by Nadav Frishman and Yaniv Zohar, is on track to become Israeli channel Kan 11’s most watched series, ever.

“Checkout” is a lot like the American network TV show “Superstore,” which follows a group of employees at a fictional big box store like Walmart as they attempt to deal with customers, make peace with their coworkers and managers, and climb the corporate ladder. In fact, given how often Israeli shows have been adapted into American versions — “Homeland,” “Euphoria” and “In Treatment” are all notable examples — it’s somewhat surprising that “Checkout” was not the basis for “Superstore.”

Israel isn’t really a big box store kind of place, so “Checkout” follows the employees and eccentric regulars at Issachar’s Bounty, a small grocery store, as they banter and snipe their way through daily life and workplace politics or cliques. Like “The Office” or “Parks and Rec,” it intersperses scenes shot in the supermarket with confession booth-style interviews with the characters.

Issachar’s Bounty is in Yavne, a small town south of Tel Aviv — not so far that Tel Aviv types never come through, but far enough that there’s none of the cosmopolitan air of the metropolis.

This is not the Israel that’s familiar to most Americans, Jewish or not — it’s not the Israel of Birthright trips, filled with Bedouin adventures and the bustling shuk in Jerusalem or Tel Aviv, nor is it the Israel of the tourism industry, focused on history and holiness and the thriving technology industry. None of the characters are religious — or, at least none of them are particularly devout — nor are they politically active.

In fact, the show doesn’t touch on any of the things that define Israel in the eyes of the rest of the world. Sometimes the storylines have a specifically Jewish element, such as when the butcher finds the likeness of a holy rabbi in a steak, or they reference Israeli politics, such as when a terrorist attack makes everyone suspicious of the store’s sweet and hard-working Arab employee. But generally, the storylines are universal — the store deals with vexing customers arguing over sale prices and the manager tries to discipline employees who are cutting corners.

Instead, what makes the show feel distinctly Israeli is the chutzpah and quirks all of the characters demonstrate. In one early episode, for example, the manager, Shira, argues with her two religious employees about the lengthy breaks they take to go to the minyan for mincha, the midday prayer, and they insist she give her office over to be used as a synagogue so they won’t have to go as far; hijinks ensue. Employees frequently close their lanes in the midst of checking out a particularly annoying customer, simply out of spite, or smoke cigarettes in the walk-in refrigerator to avoid sweating in the outdoor heat.

The plots edge on the absurdist, playing up break-room politics and taking oddball customers to their logical extreme. But if you’ve ever shopped in Israel, you have seen a checkout person close their lane with no warning to take a break, despite a long line. You’ve been elbowed out of the way by an elderly grandmother shouting at the olive vendor. It’s hard to imagine anyone being quite as nonchalantly blatant as an Israeli trying to get their way.

The show is funny, tightly written with bits of sharp social commentary slipped in between ludicrous storylines and slapstick, and it feels rooted in the unglamorous realities of Israeli culture. The question is whether Americans are interested in that kind of insight into the prosaic everyday folks of Israeli society, or whether they’d prefer to see it as an enigmatic land of unsolvable conflict, intrigue and violence or profound holiness.

“Checkout” is less controversial or exotic than “Shtisel” or “Fauda.” It doesn’t pose challenging questions about religion and Orthodoxy or morality and politics. But real life is often banal. And perhaps that’s what we really need on Israel — a dose of reality.