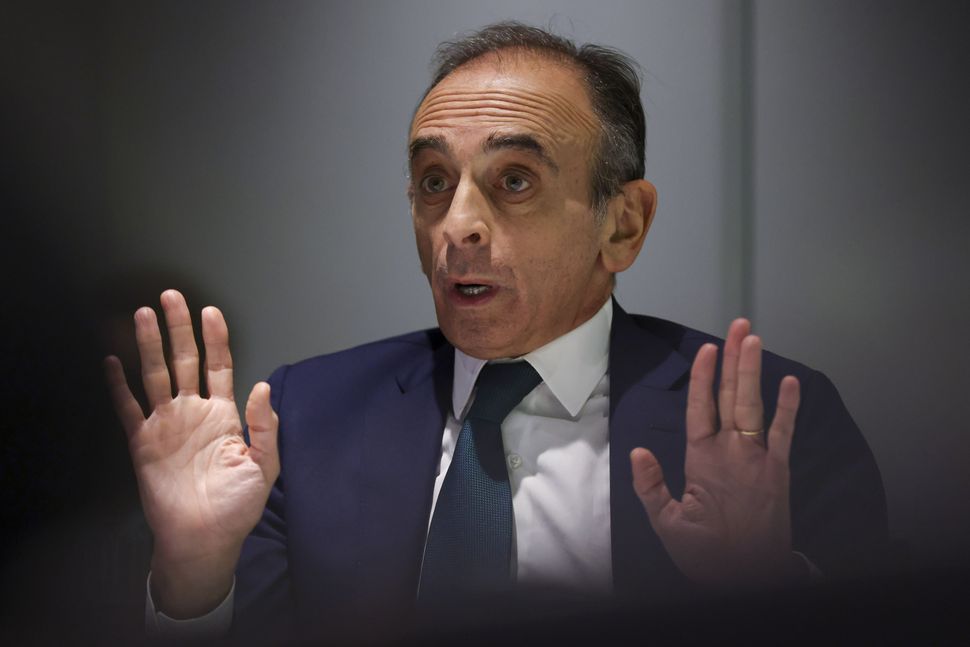 After months of hedging, Éric Zemmour finally crossed the Rubicon yesterday. In a video released on YouTube, the racist and reactionary pundit declared his candidacy in next year’s French presidential election. Upon parsing the video’s words and images, a chorus of commentators have noted the many cues Zemmour took from Charles de Gaulle’s historic appeal of June 18, 1940, delivered at the London studios of the BBC.

But they are overlooking an element that Anglo-American observers might be more likely to catch. At least, those who have seen “The King’s Speech,” the film which won the Oscar for best film of 2010.

Even those who have not seen the movie may know the climax. Upon his ascension to the throne in 1936, King George VI, played by Colin Firth, must overcome a severe stammer. It is not clear if a preposterously unorthodox cure applied by the professionally unqualified therapist Lionel Logue, portrayed by Geoffrey Rush, will work. The test comes in September 1939, when George must give a radio address to the nation following the government’s declaration of war.

As the very world, turning on its axis, seems to stammer, we shift in our seats, wondering if this will also be true for the king? 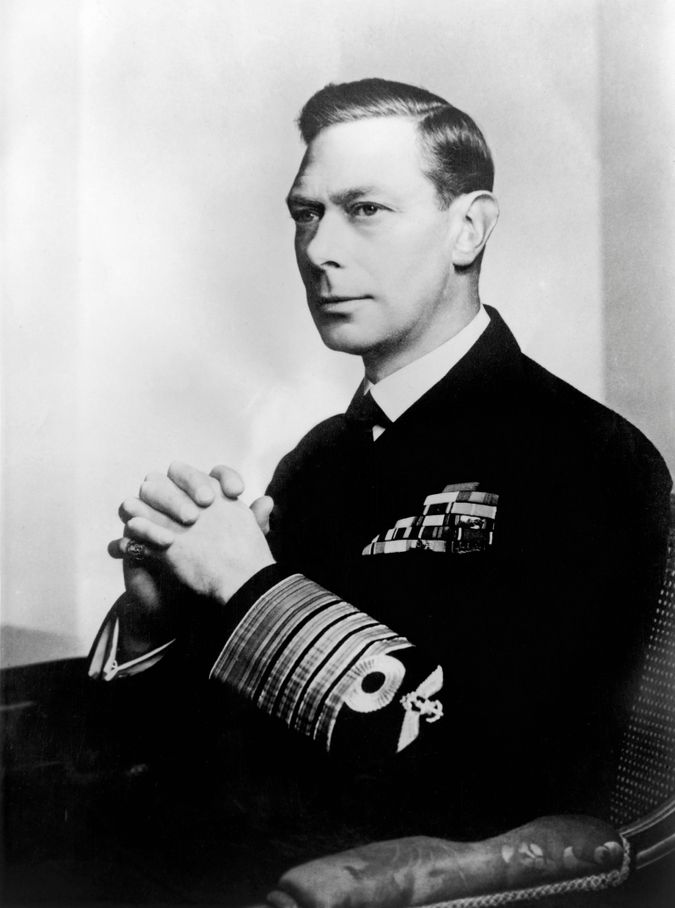 Royal Posture: King George VI was the subject of the Oscar-winning film ‘The Kings Speech.’ By Getty Images

Standing in front of a huge BBC microphone, a terrified George begins to speak. His first words are hesitant and shaky, but as he shoulders the weight of his words, George’s voice grows steadier and firmer. It helps that Logue is facing him, his hand gestures guiding — conducting, really — the flow of George’s speech. Indeed, it is as if he is conducting not just the speech, but the soundtrack as well — namely, the second movement of Beethoven’s Seventh Symphony.

As the allegretto swells to its sublime climax, so too does the speech. Against a great burst of orchestral sound, George declares: “The task will be hard. There may be dark days ahead, and war can no longer be confined to the battlefield. But we can only do the right as we see the right, and reverently commit our cause to God.”

Fast forward a decade and we find a Frenchman who would be president, if not king. For Zemmour, though, the dark days are already here, we are at war against an invader and we must do the right be pushing as far as possible to the right. The majesty of George’s historical moment veers into the travesty of Zemmour’s hysterical video, which is a steaming mess whose miasma envelops the grandeur of not just George’s speech, but Beethoven’s Seventh and de Gaulle’s appeal.

While we do not have a recording of De Gaulle’s speech — the BBC engineers, clearly, were not aware it would be historic — there is a famous photo of Le Général seated in front of a massive microphone. Erect and uniformed, he is reading from the text he has written. Happily, this has survived, as has the ringing force of his call to resistance: “Has the last word been said? Must hope disappear? Is defeat final? No!” 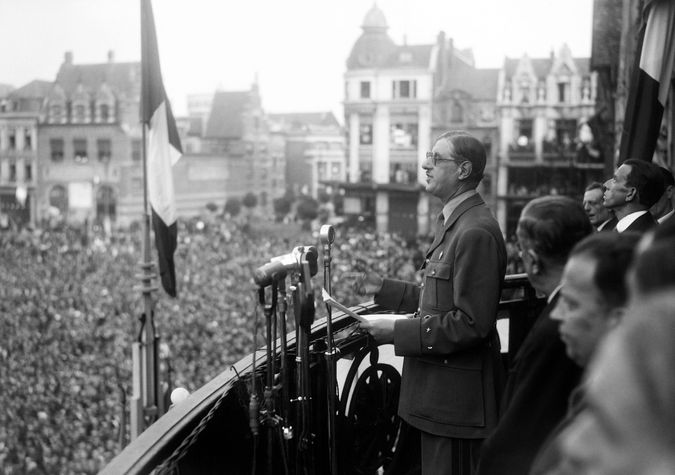 Speaking the Speech: General Charles de Gaulle, then Chairman of the Provisional Government of the French Republic, delivers a speech from the balcony of the town hall of Bethune as he visits northern France, on August 11, 1945. By Getty Images

It is no more an accident that the title of Zemmour’s recently published screed, “La France n’a pas dit son dernier mot,” echoes this line from the June 18 appeal than it is that the video frames Zemmour seated, if not quite erect, in front of a microphone as ancient and massive as those in front of de Gaulle and George. Nor is it a coincidence that the reason Zemmour gives for his candidacy — to “save France from being dominated, vassalized, conquered and colonized” — echoes the existential threat confronting France and Great Britain in 1940.

When Zemmour adds “Nous ne nous laisserons pas remplacer” — “We will not allow ourselves to be replaced” —we recall the enemy is garbed not in gray and black uniforms, but instead in brown and billowing burqas. Zemmour never utters the words “Islam” or “Muslim” during his 10-minute address. But he has no need to. His reputation had, of course, preceded him. For those still unaware of that reputation, the video’s images quickly set them right. Accompanying Zemmour’s cascade of cheap chiasmi — “Though you have not left your country, you feel that your country has left you” — is a series of scenes alternating between youths rioting in the darkened suburbs and Muslims kneeling on city streets with film clips of Joan of Arc riding horseback and Napoleon gazing out a window.

As these images flitter across the screen, we hear the deep and dirge-like opening to Beethoven’s allegretto. As the crescendo builds, Zemmour repeats the word “pays,” or “land,” 26 times. This land of knights and revolutionaries, this land of Victor Hugo and Jean Moulin, this land of cathedrals and barricades is now “a land that is disappearing.” As the movement reaches its climax, so too does Zemmour’s address to those who feel like “strangers in their land.” You have become, he announces, “exiles at home.”

It may well be that Zemmour’s youthful media team, in their use of Beethoven’s symphony, took their inspiration neither from de Gaulle’s appeal nor George’s speech. Instead, it may have been “X-Men: Apocalypse.” If you have not seen this recent installment of the X-Men saga, don’t bother. You are better off watching two hours of professional wrestling. Honest. The casting and characters are as heavy-handed and hokey as the casting and central character in Zemmour’s video.

There is a scene in the middle of the X-Men film, though, that perhaps caught the eye of a Z-Man. The villain Apocalypse, played by a disguised Oscar Isaac, literally gets into the head of the hero Charles Xavier, portrayed by James McAvoy, forcing him to use his telepathic powers to launch into space the world’s stockpile of nuclear missiles. As citizens and soldiers helplessly watch the rockets climb toward the heavens, the soundtrack throbs to…the second movement of Beethoven’s Seventh.

Fittingly, Apocalypse is the moniker given to En Sabah Nur. It turns out that he is not just any villain, but one who hails from, yes, ancient Egypt. As Zemmour might say, “Et voilà!”