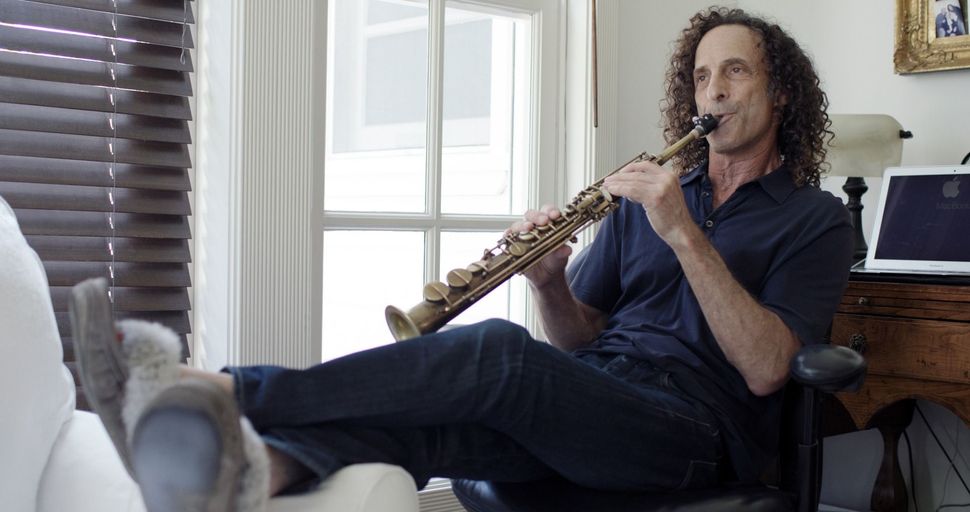 Like the tides, romance or dentists’ waiting rooms, Kenny G has always seemed to exist. But have you ever wondered what he’s like?

It is the saxophonist’s particular curse to take up the most mental real estate in his biggest detractors — critics and purists who dismiss his mass appeal brand of virtuosic musical Novocaine as a blight to the grand tradition of jazz. The millions who buy his records, elevating him to the status of best-selling instrumentalist of all time, probably like him because they don’t have to think much about him at all.

G, born Kenny Gorelick, a nice, quiet Jewish boy from Seattle, knows this. When director Penny Lane asks him how he’s feeling at the beginning of “Listening to Kenny G,” a new HBO documentary about his maddening success, he answers, “Underappreciated.”

He goes on to kvetch — he later identifies this as a “Jewish word,” either forgetting the word “Yiddish” or catering his meaning to the masses — about how he can’t go anywhere without his sax: “I never get invited anywhere because of me.”

These words are themselves an invitation to finally discover who the G Man is. The image that emerges, as he practices barefoot in his bathroom, pilots a pontoon plane and signs the wall of his high school in Seattle, is one of a perfectionist, a grind who is stunningly disinterested in music history and largely allergic to introspection.

Asked what he loves about music, he says, “I don’t think I love music that much.” He cares about the musicians — the hard work they put in to perfect their craft. This reverence for musicians feels a bit hollow when G later fails to identify Thelonious Monk on a mural in his studio, but it fits into a pattern.

Talking heads like Jason King, chair of the Clive Davis Institute at NYU, note how G continues a long trend of white artists appropriating a Black form and reaping greater success than its originators.

Though this appears to be a consensus view in the jazz world, G says he never gave much thought to how whiteness may have benefited his rise. On reflection, when asked by Lane to consider it, he supposes his race did save him from being relegated to R&B stations at the start of his career. It’s hard to know if G is fibbing about how novel a question this is for him, but earlier in the film he mentions how one of his first albums showed him in silhouette — ambiguously white or Black — and how he, to his credit, demurred when asked to write music for “15-year-old kids in the ghetto.”

Lane, known for “Our Nixon,” which gave an intimate picture of a disgraced president and “Hail Satan?,” about the inner workings of the Satanic Temple, has a unique puzzle in G, who oscillates between moments of professed self-awareness and delusions of extreme grandeur.

In an editing suite, he shows Lane how he stitches together songs from various takes for an album he’ll call, with no due modesty, “New Standards.” “It may look like it’s sterile, but it’s not,” he insists of his process. Sterile is not the right word — seamless, or, of course, smooth, may be. There’s no denying he is good at his instrument, but technical proficiency is different from soul.

Thelonious Monk is worth remembering not because he hit the notes you expected, but because, in his own meticulous craft, he surprised you with notes you didn’t. Still, from this portrait of G it’s hard to say his music is soulless or simply contrived to sell the most records. If anything, the music seems representative of his soul — a spick-and-span spirit that prides itself on immaculately-laundered white pants, a perfect putt (apparently he’s quite good at golf) and trusting his own taste above the tradition he’s drawing from. But when it comes to recognizing that tradition, there is some progress.

Lately, for his adoring fans — who are treated most kindly in Lane’s film — he has taken to playing the work of his predecessors, educating disinterested crowds on Coltrane and Stan Getz. He admits that he himself is learning about their contributions rather late in life. It’s an encouraging note to end on, but it ultimately goes sour. He plans to release a duet with the ghost of Getz, playing along to one of his old tracks. It’s a move even his loving mentor from high school, James Gardiner, questions. He may be right to, given the vitriol that came when G had the nerve to play opposite a tape of Louis Armstrong’s “Wonderful World.”

G seems to be learning about jazz to topple or challenge its past icons, and even has designs on the classical world, mentioning himself in the same breath as Bach and Beethoven. His ambitions strangely culminate in a reflection on a past he can truly claim — a Jewish one. At least I think that’s what he’s driving at.

G has just the right song for a film set somewhere in Europe — Austria, Switzerland, Germany. One of those. “Cold, postwar or during the war, World War II or something,” he offers, as Lane shows us footage from “Schindler’s List” and “Valkyrie.” G says it could be called something like “The German Captain” or “The Swiss Captain.”

His pitch makes no sense. (Last I checked, the Swiss weren’t seeing a lot of combat in World War II — that’s kind of their whole shtick.) He has a song that’s perfect for all of these times and locations? That all-purpose and disconnected from context? Of course he does.

“And it’ll win the Academy Award,” G concludes. “I know it.” Given his track record, he may be right.