Long after the Holocaust, the glittering spirit of a Jewish art world endures There are many reasons to celebrate the 20th anniversary of New York’s Neue Galerie. To begin with, the elegant museum, focused exclusively on German and Austrian art, has reopened, after being closed for more than a year due to COVID. And it has done so with panache, with “Modern Worlds: Austrian and German Art, 1890-1940,” an exhibit made up entirely of highlights from the museum’s permanent collection.

The collector himself is the philanthropist, World Jewish Congress president and Neue Galerie president Ronald S. Lauder, and the museum is housed in the 100-something-year-old mansion on Manhattan’s East 86th Street that was for decades home to YIVO, the cultural foundation devoted to the history of European Jewry that had been originally founded in pre-Nazi Europe.

This pedigree helps explain why I always feel the presence of Jewish spirits — and ghosts — whenever I enter. More than that, it is because the museum’s focus on German and Austrian art from the last decade of the 19th century through the 20th century’s two world wars can’t help but also provide a glimpse of and a commentary on the history, and the fate, of the once thriving, and then devastated Jewish communities of these same two countries. 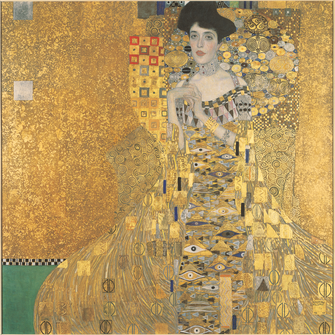 The museum is itself well-aware of that link, as has been demonstrated by several standout exhibitions reckoning with the past. The 2014 exhibit “Degenerate Art: The Attack on Modern Art in Nazi Germany 1937,” for instance, centered on Hitler’s war against “degenerate” art — the wide-ranging term the Nazis used to encompass modernist art as a whole, as well as anything produced by Jewish artists.

And, anyone who has seen the 2015 movie “Woman in Gold,” which starred Helen Mirren and Ryan Reynolds, can’t help but view the collection’s most famous painting, Gustav Klimt’s “Portrait of Adele Bloch-Bauer I” without remembering how the Nazis looted this masterpiece, and so many other artworks, from Jewish owners. And yet it took decades of litigation before the Austrian government agreed, in 2006, to return the Klimt painting to the surviving heirs of the Bloch-Bauer family, from whom Lauder subsequently purchased it.

Completed by Klimt in 1907, this dazzling gold-and-silver-leafed depiction of Adele Bloch-Bauer, the wife and daughter of wealthy Jewish Viennese bankers and industrialists, is a gem of the collection and is highlighted in the current exhibit. It is also emblematic of the sumptuous brilliance of Viennese society in its golden age and inextricably entangled with the darker timeline of the Nazis’ war against the Jews.

This shadow can make it a challenge to evaluate the paintings on display on their own merits, without projecting onto them our foreknowledge of history. And our expectations can be more than misleading. For instance, the drawings displayed here by the Expressionist Austrian illustrator Alfred Kubin (1877-1959) include such decidedly powerful yet undeniably creepy subjects as a naked figure fleeing from a giant insect, dark stinger at the ready (“Man in a Storm,” 1903) and the sinister allegory from 1900 of “The Mother of Us All,” in which a naked, pregnant woman sows seeds in front of her, while a long line of heads devoid of bodies lie on the ground behind her.

To be sure, Kubin’s hallucinatory images presage dread and doom — and his work was, indeed, banned as degenerate by the Nazi regime — but his macabre imagination owed less to political anxiety than to his own melancholic psyche, and perhaps it was this shared affinity that enhanced his friendship with the writer Franz Kafka. 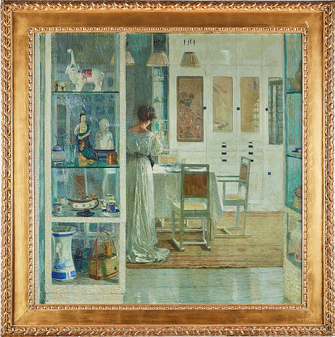 Contrast Kubin’s moody work with the calm serenity invoked by the museum’s newest acquisition, “White Interior,” a 1905 work by Viennese artist Carl Moll, purchased by Lauder earlier this year for a reported $4.75 million. This graceful study in diffuse and dappled light portrays a woman in a white dress, her back turned to us as she stands before a sleekly-designed dining table and cabinets, also mostly white, and surrounded by glass vitrines of Asian ceramics and other art objects.

It is almost impressionistic in its effect — a style deemed degenerate by Hitler. Moreover, the woman depicted is the influential Jewish Viennese critic, salon leader and champion of modernist art, Berta Szeps Zuckerkandl, who fled Vienna when Hitler annexed Austria in 1938. You would not necessarily predict (nor does the wall text inform viewers) that Moll himself was a fervent supporter of Hitler who committed suicide as the Reich’s defeat neared in 1945.

This exhibit also allows us a peek at the sophisticated space — dominated by straight lines and rectangles — styled by the famed modernist architect and designer Josef Hoffmann (1870-1956), represented here by a stunning array of jewelry, glassware, silver objects, tableware and chairs. Many of these works were executed in conjunction with the Wiener Werkstätte (WW), the consortium of artists, architects and craftspeople he had co-founded in 1903 and headed until it disbanded 30 years later.

In the WW’s first years, its chief financial backer was Fritz Waerndorfer, a prosperous Viennese Jew and arts philanthropist two of the most exquisite of his brooches on display here as gifts for his wife Lili. The Waerndorfers were apparently typical of the WW’s clients, according to the hefty catalogue accompanying the exhibit.

“The affluent clients of the WW were primarily from families of Jewish ancestry of the nouveau riche whose wealth and status were drawn from banking and industry,” Janis Staggs, Director of Curatorial and Manager of Publications at Neue Galerie, writes. “They sought means to display their wealth and aspirations, and progressive art and design proved to be the perfect vehicle to achieve this aim.” 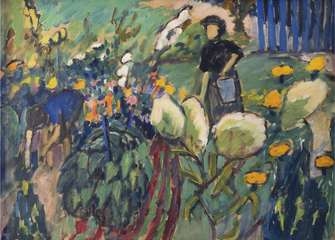 What the catalogue does not reveal is that after Hoffmann’s Jewish clients (along with the rest of Austria’s Jews) disappeared in the wake of the Anschluss, Hoffmann welcomed a new client: the Reich itself, for which he completed a variety of architectural commissions. In addition, he served throughout the war as the Reich’s Special Commissioner for Viennese Arts and Crafts. Can we — should we — forgive him? 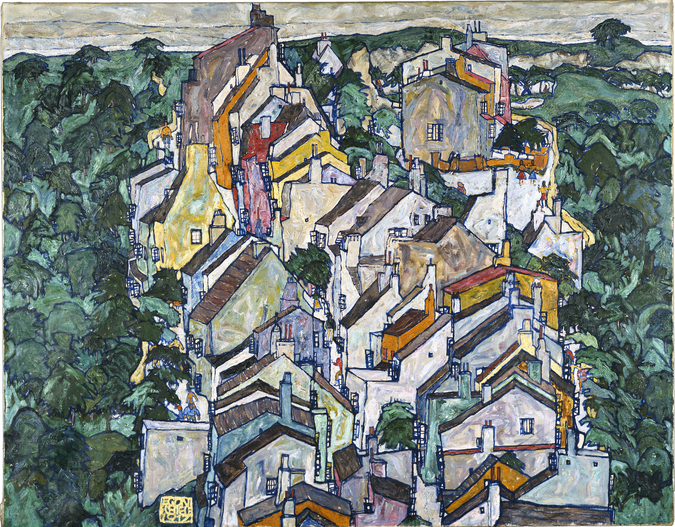 I pondered this question as I viewed Hoffmann’s works alongside the many canvases displayed here that are today celebrated as masterpieces, but that under Nazi rule were considered “degenerate” and therefore subject to confiscation and destruction. This notable roster includes works by Ernst Ludwig Kirchner, Egon Schiele, Gabriele Münter, Wassily Kandinsky, Oskar Kokoschka, Paul Klee, Ludwig Meidner and Max Beckmann, among others.

I paused to marvel at the artistic achievement and distinctive vision so vividly apparent in each of these works. But I remained the longest before the exhibit’s final work, “Self-Portrait in the Camp,” painted in 1940 by the German Jewish artist Felix Nussbaum.

Nussbaum was “among the most talented artists of his generation,” the noted critic and curator Olaf Peters writes in the exhibit catalogue. When Hitler came to power in 1933, Nussbaum was in Rome studying on a fellowship awarded by the Prussian Academy of Art, a prize that was then withdrawn due to Nazi racial laws.

In 1935, Nussbaum fled to Belgium with his soon-to-be-wife the artist Felka Platek. There they remained until May 1940, when the Nazis invaded Belgium and deported him along with thousands of other Jews to the St. Cyprien internment camp, in southern France. After two-and-a-half months, though, he escaped, making it back to Brussels where he and his wife survived in hiding for four more years. During that time, he bore witness through his painting, including in this work, to the degradation, deprivation isolation, persecution and sheer terror endured under Hitler’s regime.

All too aware of the uncertainties ahead, but hoping that this record would survive even if he did not, in 1942 he began leaving many of these works in the safekeeping of others. By the spring of 1944, the Allies were advancing, but not quite fast enough. In July 1944 the couple were discovered and sent to their deaths in Auschwitz. But in his self-portrait, Nussbaum’s haunted, defiant visage endures, daring us to gaze into the bleak tableau of humiliation and despair stretching into the debris-filled distance behind him. It is a somber but compelling ending to an exhibit that began with the glistening allure of what seemed like gold.

Long after the Holocaust, the glittering spirit of a Jewish art world endures