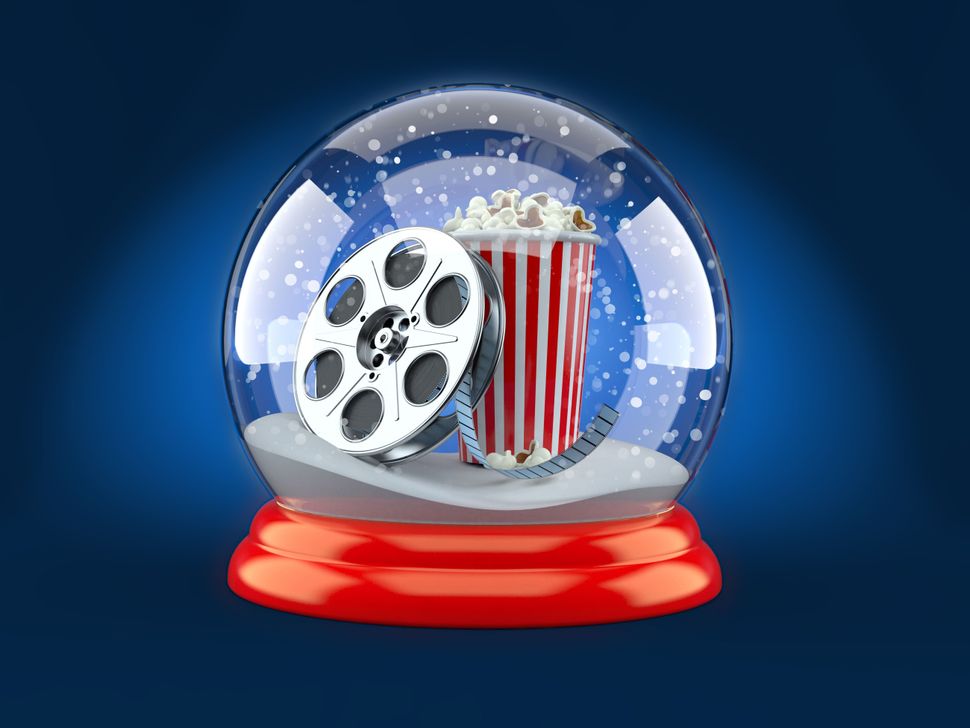 A film reel and popcorn in a snow globe. Image by iStock

This year for sure, we all fervently hoped we would be able to return to the dim, dank and sticky sanctuary of our local multiplex and engage in that most hallowed Jewish custom: A movie on Christmas.

Man plans, Hashem laughs. With a new, super-transmissible variant of the coronavirus rampaging through the world, many still may not feel comfortable filling seats for a matinee of the new “West Side Story.” Or even seeing Bono’s turn as a widower musician (who is also a lion) in “Sing 2!” But then, in this age of streaming we’re never short on at-home options. If anything, we have too many.

With that in mind, here’s a list of films you can watch without a mask from the (hopefully) pandemic-free zone of your home. Some are appropriate for Yule. Others have David Spade doing llama drag in pre-Christian South America. All are worth your time as you take a load off this Xmas, which, not for nothing, falls on the Sabbath, but ends after Havdalah.

One of my favorite guilty pleasures is watching Christmas movies on the Hallmark Channel (where you can probably find this playing – check your local listings). I think I’ve watched nearly all of them. That’s more than one thousand films featuring a romantic meet-cute, a snowball fight, and a kiss under the mistletoe. But in 2012, the channel known for jingle bells and gingerbread diverted from their usual fare with a unique spin on the holiday classic. In “Hitched for the Holidays,” a Jewish woman hires a non-Jewish guy to come home with her for Hanukkah and pretend to be her boyfriend to appease her nagging parents. Joey Lawrence, of the 1990s sitcom “Blossom” and a strong 9 out of 10 on a scale of actors who exude non-Jewishness, reciting the prayers over the menorah is pure comedy gold … er, I mean gelt.

This is a great old slapstick comedy that’s weirder by half than any Christmas movies made today, and features the amazing Jewish character actor S.Z. Sakall in one of his great roles. You can watch it on Amazon Prime.

When Susan Sontag wrote “Notes on Camp,” could she have imagined that in just two short decades Grace Jones, Cher, Charo, Little Richard, Zsa Zsa Gabor, Joan Rivers, Whoopi Goldberg and Dinah Shore would descend on a man-child Jew’s playhouse Christmas festivities, and that camp would then reach its platonic apogee? Who cares. We get to watch it. It’s on iTunes. Though, if you have it, it’s best appreciated on a worn-out VHS tape.

“Elf” is the ultimate Christmas movie. Peak Will Ferrell, James Caan of “Godfather” fame, a blonde Zooey Deschanel AND the cutest narwhal you’ve ever seen. You won’t be able to stop telling people that “the best way to spread Christmas cheer is singing loud for all to hear” – or calling them a “cotton-headed ninny muggins.” You can watch it on Hulu, HBO and Amazon Prime. And it may also be playing on TV during the holiday.

Life is generally not great across the United States, and why not get a laugh from the sardonic tale of a conceited emperor who is accidentally transformed into a llama during a failed assassination attempt? It’s on Disney+ (of course).

You have to go with a classic – “A Christmas Carol,” with Patrick Stewart- a story of redemption with some excellent scenery chewing and ghosts! It’s on Hulu.