In an overlooked comic from the early 1970s, the most Jewish superhero story ever told “Eternals,” a movie based on a Marvel comic about immortal agents of giant space gods, arrived on Disney+ Jan. 12. The “Absolute Fourth World by Jack Kirby Vol. 2” comes out Jan. 18. It’s an omnibus collection of DC Comics’ sprawling saga about warring alien gods.

Though these comics are by rival companies, they’re actually related. Both were created by the legendary Jack Kirby, both explore many of the same themes, and both are heavily Jewish. 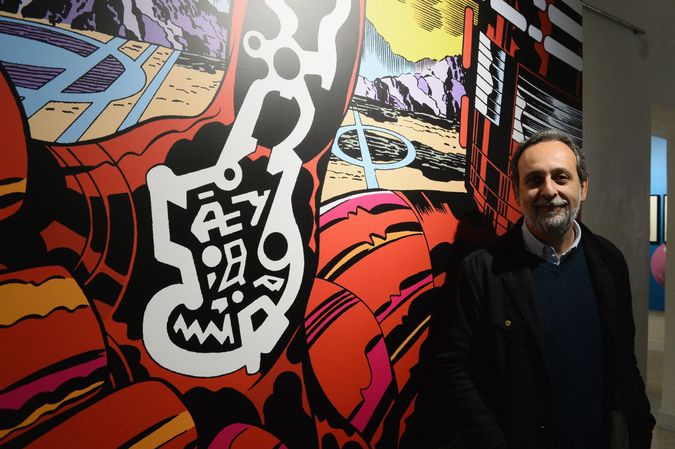 For the uninitiated, Jack “King” Kirby, born Jacob Kurtzberg in 1917 on the Lower East Side, is arguably the most important artist in the history of comics. His co-creations include Captain America, Fantastic Four, Hulk, Thor, Ant-Man, Iron Man, Avengers, X-Men, Black Panther and countless others, most with writer Stan Lee. A founding father of modern pop culture, he’s one of the most influential artists of the 20th century.

Kirby’s magnum opus is the “Fourth World,” a metanarrative told through several series between 1970 and 1973. Like most Kirby creations, it’s an eclectic mix of inspirations, collaged into something new and avant-garde. And even though it’s about a pantheon of alien gods, it’s his most Jewish work, and possibly the most Jewish story in mainstream superhero comics.

Kirby was the biggest name in the industry, and when he left Marvel to work for DC it was as if John Lennon had left the Beatles for the Rolling Stones. He had his pick, and, of all things, he chose the ancillary series “Superman’s Pal, Jimmy Olsen” (making the Fourth World technically a Superman spinoff), soon launching three new, interrelated titles: “New Gods,” “Forever People” and “Mister Miracle.”

December 1970’s “Jimmy Olsen” #134 introduced the saga’s breakout character, the villain Darkseid (pronounced Darkside). Kirby’s bad guys were often fascists rather than criminals or lunatics, like the Red Skull and Doctor Doom, but with Darkseid he took the concept to its conclusion. A dark god who conquered his world and enslaved or exterminated those he deemed inferior, on a quest to subjugate all of creation, he’s a cosmic Hitler. 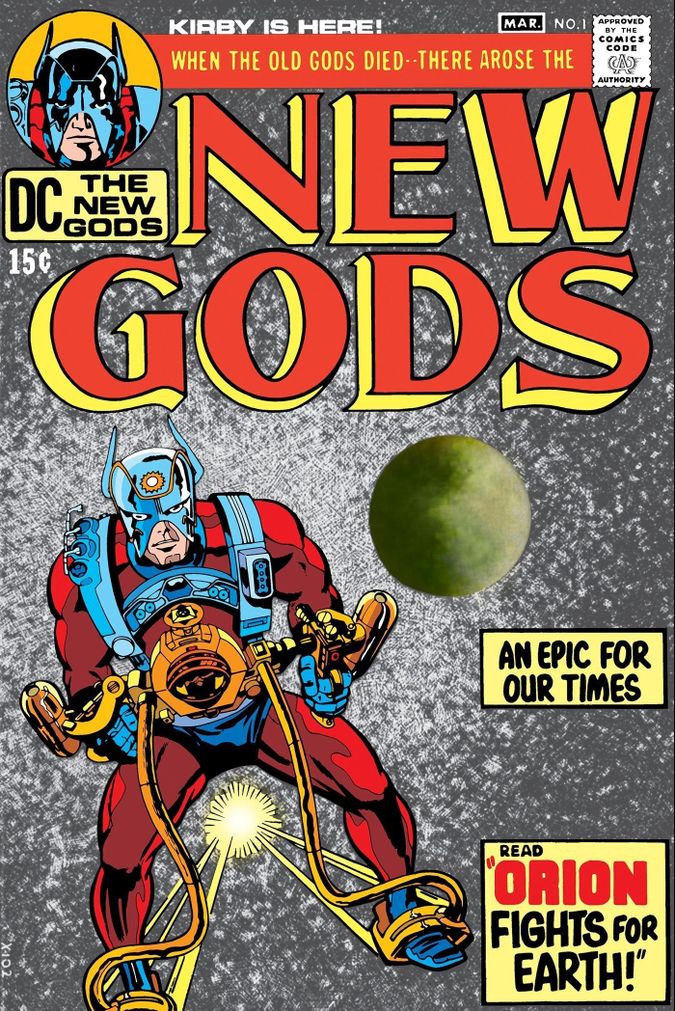 New God: In this first installment, Orion fights for Earth. By DC Comics

Darkseid is the platonic ideal of authoritarianism. He seeks not just territorial conquest, but the Anti-Life Equation, a sci-fi spell giving its wielder control over free will itself. It’s a metaphorical warning that if the right formula — the right conditions, right demagoguery — is in the wrong hands, we might find ourselves swept up mindlessly in a madman’s quest for power.

Darkseid’s high command is similarly based on Nazi archetypes. His top general is Steppenwolf, the villain of the 2017 “Justice League” movie, whose name is also German. It means steppe wolf or grassland wolf, a possible wordplay on General Rommel, the Desert Fox.

Another is Virman Vundabar, “Virman” combining “vermin” and “man” and “Vundabar” being a phonetic spelling of “wunderbar,” German for “wonderful.” He is dressed in a mix of Prussian and Nazi uniforms, including polished jackboots and armband, plus a Mussolini sash. His mannerisms are equally caricatural, including fastidiousness and heel-clicking.

While the evil New Gods are Nazi metaphors, the good New Gods opposing them are brimming with Jewish signification.

Kirby never explained the term “Fourth World,” but it seems mean a plane of existence, echoing the Midrashic and Kabbalistic concept of preceding and succeeding worlds. The story is told with biblical resonance, full of awe-inspiring elements and the language of scripture. “An ancient era was passing in fiery holocaust!” the very first page of “New Gods” #1 reads. “Then—there was new light!”

The warrior Orion, the closest the narrative offers to a protagonist, is a Moses figure, the birth son of Darkseid raised in the royal court of the enemy. And like Moses, he struggles with his hot temper. He’s actually based on Kirby himself, a gruff WWII Bronze Star recipient. When Orion’s “true face” is revealed in “New Gods” #5 it’s an exaggerated self-portrait, down to the bushy eyebrows. (Kirby did this often, most famously with the Fantastic Four’s Thing.)

Orion’s adoptive brother, Mister Miracle, starred in his own eponymous title as a Harry Houdini-like “god of escape,” long before Michael Chabon posited Houdini, the son of a rabbi born Ehrich Weisz, as an overlooked source of the superhero idea in his 2001 Pulitzer Prize-winning novel, “The Amazing Adventures of Kavalier & Clay.”

Miracle’s wife, Big Barda, was inspired by both Jewish singer and actress Lainie Kazan (Levine) and Kirby’s own wife, Roz. Metron, who travels space in his Mobius Chair to observe and record the universe, was based in part on Leonard Nimoy, and his name and role are patently derived from the recording angel Metatron (alt. Mitatron or Mattatron), the celestial scribe perennially seated while performing his heavenly duties.

New God: In this first installment, Orion fights for Earth. By DC Comics

Metron’s outfit features a pattern of interconnected spheres and lines — one of Kirby’s signature design motifs — resembling Kabbalah’s Tree of Life cosmological diagram. (Fun fact: Marvel’s big baddie, Thanos, started out in 1973 as a rip-off of Metron combined with Darkside.)

Himon, a homophone of Hyman, is a scientist and mystic based on the Jewish Shel Dorf, founder of San Diego Comic-Con and friend of Kirby’s. He’s the inventor of Mother Boxes, portable super-computers that connect to the all-knowing “Source.” More than a precursor to smartphones, they were first drawn in “Mister Miracle” #9 as black cubes worn with straps wrapping down the arm; they look an awful lot like tefillin.

The most Jewish character of the opus is Highfather, leader of New Genesis and Darkseid’s foil. A bearded, robed sage and prophet, he carries a magical shepherd’s crook, called the Wonder-Staff.

Born Izaya (The prophet Isiah’s name means, appropriately, “God is salvation”), “New Gods” #7 tells of his sojourn through the desert of New Genesis, where he first encounters the Source — a higher power that speaks to him in flame. It bestows upon him a new destiny, and he returns to lead his people in their fight against oppression as Highfather.

The Source is described as “eternal!” and the origin of “the written word.” It communes with Highfather through “The Wall,” the last remnant of the old gods, evoking the Western Wall in Jerusalem.

Highfather is clearly Moses and the Source is clearly God. This is not subtext but text, a deliberate evocation of the Bible. Kirby was being referential, perhaps playful, but certainly not coy.

Kirby essentially based the good gods on Jewish figures and the evil gods on Nazis, including their respective philosophies. In doing so, he cast the celestial struggle of the Fourth World in terms of Judaism versus totalitarianism.

Like many great works, the saga was unappreciated in its time, a grand space opera years before “Star Wars.” It failed commercially and was soon canceled, but its high-minded concepts and original characters have since become cornerstones of DC’s shared universe.

Darkseid went on to become one of Superman’s greatest adversaries — apt, given that the Man of Steel was created as a Jewish reaction to Nazism — and Kirby was posthumously honored in the 90s’ “Superman: The Animated Series” when Detective Dan Turpin, another of his avatar characters who debuted in “New Gods” #5, was drawn to look exactly like him. In an episode dedicated to Kirby, Turpin died a heroic death fighting Darkseid and was given a Jewish funeral, replete with a Kaddish.

Subsequent creators have handled the Fourth World with mixed results, but it wasn’t until fairly recently that any of them picked up its Jewish themes. Jewish writer Tom King, who made Green Lantern canonically Jewish, and artist Mitch Gerads filled their “Mister Miracle” limited series (October 2017–January 2019) with Jewish subject matter.

It introduced Miracle and Barda’s newborn son, Jacob, implicitly named after Kirby and explicitly after “Jacob’s Ladder,” an Apokoliptian means of salvation reaching from the hellish fire pits to a figurative “heaven,” borrowed from the biblical patriarch’s famous dream sequence. It also gave their ally Oberon, yet another short, stocky, gruff Kirby character, the surname Kurtzberg.

King also wrote the script for the “New Gods” movie, which Ava DuVernay was hired to direct (“Selma,” “A Wrinkle in Time”), but it floundered in development hell and was eventually canceled last April. If the project ever comes to fruition, it’ll be interesting to see if it does justice to the comic’s unbridled imagination, as well as its rich Jewish heritage.

In an overlooked comic from the early 1970s, the most Jewish superhero story ever told