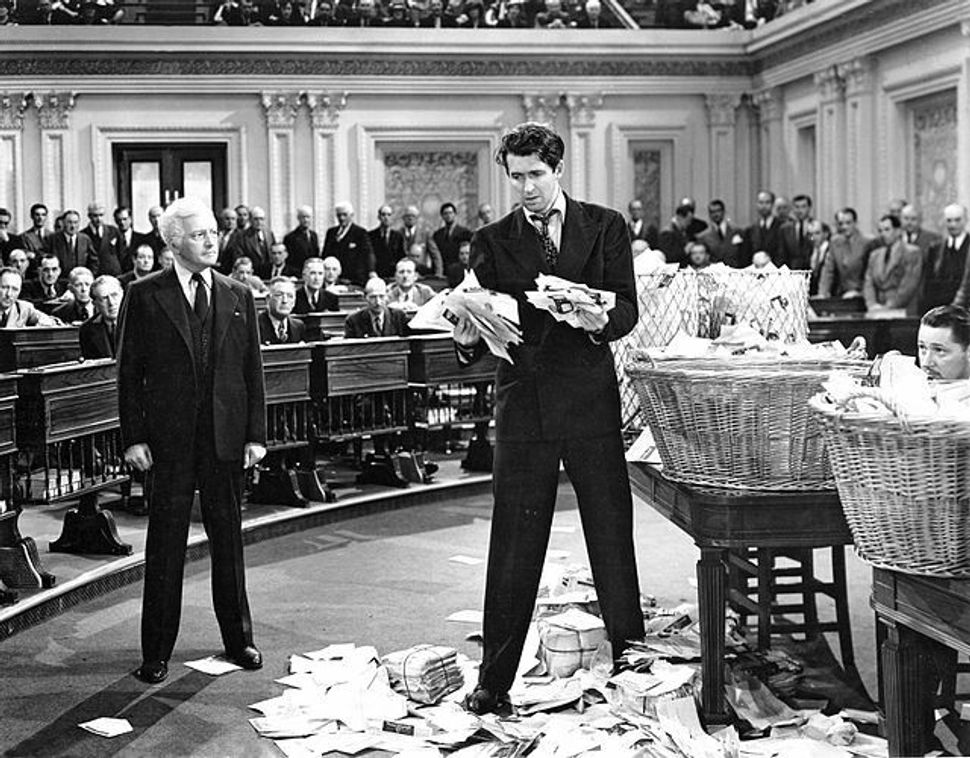 When Ted Cruz read “Green Eggs and Ham” to protest Obamacare, he was probably thinking of Jimmy Stewart.

The divisive tradition of the filibuster, which Senate Majority Leader Chuck Schumer is now hoping to bypass to bring voting rights to the floor, was never so memorably committed to film as in Frank Capra’s 1939 film “Mr. Smith Goes to Washington.”

Naturally the film is Capra-esque, limned with American ideals. Sidney Buchman, who wrote the words for Stewart’s famous “I will not yield” speech, conjured a character who was on a one-man crusade to stop graft in the face of blackmail. (OK, maybe that part isn’t too idealistic – but it ends well despite all logic.)

Buchman, who was Jewish and a former member of the Communist Party, would later have his own righteous Mr. Smith moment before the House Un-American Activities Committee. It didn’t end quite so well for him. He was blacklisted for his troubles, but would go on to work on the Elizabeth Taylor “Cleopatra” and the adaptation of Mary McCarthy’s “The Group” after the specter of McCarthyism passed.

One reason why the filibuster, one of the more bizarre levers of our democracy, is still defended by some is precisely because of a “Mr. Smith” scenario. Or the need to challenge the terror of an awful instrument of government like HUAC. The fact that one man could take a stand and run out the clock on evil laws looks great in a case like Senator Jefferson Smith’s, where he is so clearly in the right and so persuasive.

Smith’s scenario of an unalloyed and solo defense of widely agreed-upon American principles, doesn’t seem to hold water in real life. The filibuster is sort of a team sport. As it exists now, critics argue, the measure is anti-democratic, allowing a minority party to block legislation from the elected majority, and in so doing, disrupt the will of the majority of American voters. Members of both parties cling to it in the fear that, someday, they may not have the numbers on their side. Which is pretty fatalistic, really.

Viewed from a distance, it’s bizarre that lawmakers are so precious with the right to talk themselves blue in an imitation of Stewart’s frazzled marathon of speechifying. But then, people who enter politics often fancy themselves heroic and believe in their power to make an individual difference.

These days, and historically, the filibuster is rarely the stuff of heroes but rather a fly in the procedural ointment (and, in the case of Cruz, one that rhymed and accomplished nothing). It’s a procedure that’s been used to some awful ends, preserving the poll tax and scuttling anti-lynching legislation and that Republicans are now eager to use to forestall long overdue election reform.

And, quite frankly, it makes whoever takes it on look pretty ridiculous and not quite as handsome as a young Jimmy Stewart.

Sidney Buchman provided us with a better profile in courage later in his life when he went before HUAC. He refused to name names, speaking up for justice by saying nothing at all.