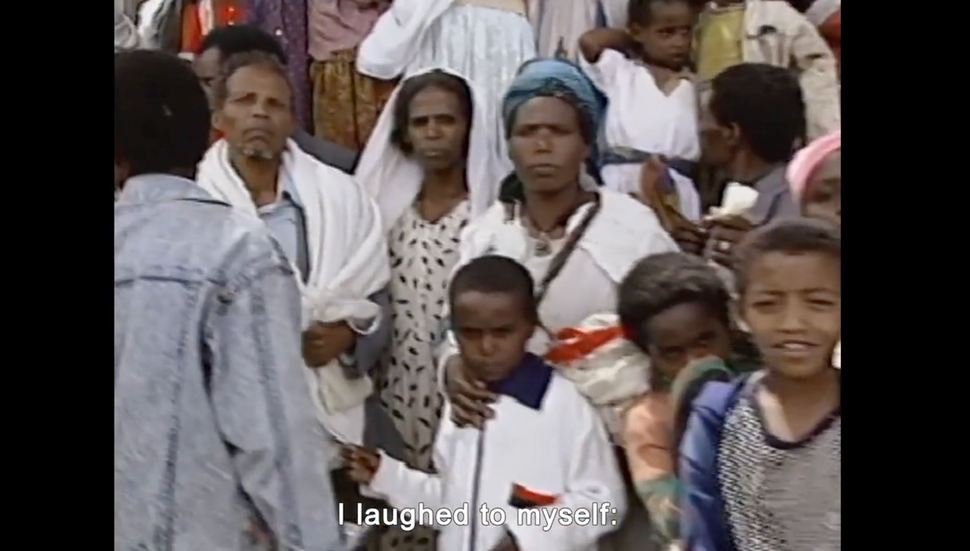 A still from “With No Land” shows archival footage of Beta Israel gathered before Operation Solomon. Courtesy of With No Land

When we hear about racism or discrimination in Israel, it is usually about Jewish-Arab relations. It is far more rare that we hear the complicated story of Beta Israel, the Ethiopian Jewish community, who also face discrimination in the country. Usually, if we hear anything about their plight, we hear of Israel heroically airlifting thousands of Ethiopian Jews out of the country in covert operations. The truth of the story if far more complicated.

“With No Land,” a documentary about the Ethiopian Jews and their immigration to Israel, directed by Ethiopian immigrant Aalam-Warqe Davidian and Israeli native Kobi Davidian, a husband-wife filmmaker pair, sheds some light on the complexities involved in the Ethiopian Aliyah, giving far greater agency to the Ethiopian activists who worked to evacuate their community.

“I was astonished to hear a lot of stories about their work and their struggle to come to Israel,” Davidian told the Times of Israel in an interview about the documentary. “What I learned [growing up] is that they didn’t do anything, we just came and took them.”

Discourse around Operation Moses and Operation Solomon, the missions which airlifted thousands of Ethiopian Jews to Israel, often portray Israel as the heroic rescuers of a persecuted Jewish minority. But in fact, activists from Beta Israel had to push the Israeli government to help their community immigrate, especially after the Israeli Ministry of Absorption decreed that they were foreign to the Jewish people and thus ineligible to make aliyah under the Law of Return; that decision was reversed in 1977 after hard advocacy work.

Even once the first major wave of Ethiopian migrants arrived in Israel after Operation Moses, in 1984, they did not find the safety and welcome they had hoped for. Activist Adiso Masala recalls being taken, without explanation or consent as almost none of the Ethiopian refugees spoke Hebrew, to a room to be vaccinated — and, it turned out, re-circumcised; the circumcisions only ceased after more than a month of protests.

The documentary interviews many of the major players in the movement to evacuate Beta Israel, largely Ethiopian Jews, discussing the larger politics at play that impacted the waves of immigration. Operation Moses, for example, depended on secrecy; a fragile agreement with Sudan allowed Israel to fly members of Beta Israel out, but once Israeli journalists broke the story, Sudan’s Arab allies began pressuring the country to put a stop to the operation.

We also learn that Operation Solomon, a high-pressure mission in 1991 evacuating over 14,000 Ethiopian Jews in 36 hours, was a result of Cold War politics. Ethiopia’s Soviet-supported Mengistu regime had been preventing the migration of the Ethiopian Jewry. But after the collapse of the U.S.S.R., Mengistu was struggling to maintain power and hoped to instead gain support from the U.S. — an opportune moment to push to evacuate the Ethiopian Jewry.

Most effectively highlighted by the documentary are the families often separated during the immigration process. The sudden end of Operation Moses in 1985 stranded hundreds of Ethiopian Jews — all of whom had risked their lives walking for weeks through the desert to arrive at the operation’s pickup point — in refugee camps in Sudan after the airlifts were stopped.

Other families were separated during the immigration process due to arbitrary rulings from Israeli immigration authorities. A mother and six out of her seven children, for example, were approved for entry to Israel but her daughter is still, even today, in Ethiopia — where she is now married and has children of her own, still hoping to one day unite with her family.

The amount of history that is covered in the documentary can be overwhelming and hard to follow, but that’s not entirely its fault. Documentaries on topics more well-known in the West can rely on their audience’s preexisting knowledge of the event; films on the Holocaust can focus on specific aspects of the Nazi regime because viewers already know the broad brushstrokes of World War II.

African politics and history, whether the Sudanese civil war that impacted Operation Moses or Ethiopian ethnic tensions,are often left out of our history books and mainstream news coverage. “With No Land” has to explain the entire landscape of the region as well as the Israeli government’s suspicion of Beta Israel and the tensions with the migration.

That tension continues even today; though immigration has become slightly easier, and the documentary ends with shots of planes from Addis Ababa filled with migrants in surgical masks — the universal visual symbol of our current era — Beta Israel is still not truly welcome in Israel. The Israeli Immigration and Population Authority released a statement just this past November casting doubt on the Jewishness of a group of migrants from Ethiopia. The Israeli National Security Agency similarly implied many Ethiopian migrants are lying about their religion and ethnicity to get into Israel.

There are few members of Beta Israel left in Ethiopia today; most have finally moved to Israel. But it’s clear that even after aliyah, the problems of the Ethiopian Jewry persist.

”With No Land” was screened on Monday as part of the New York Jewish Film Festival.