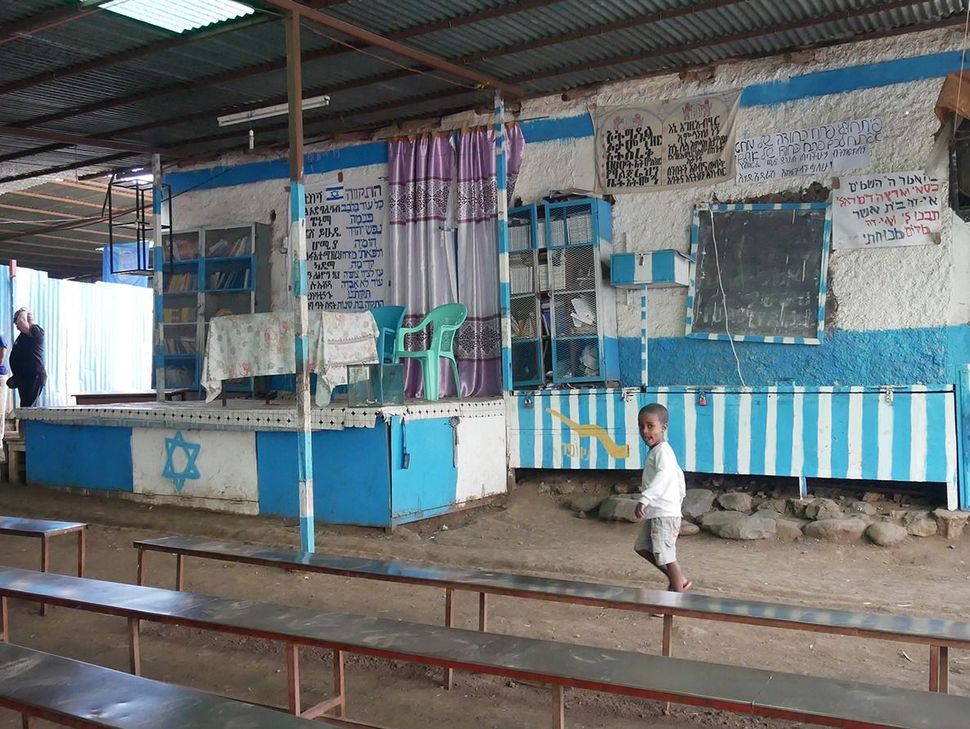 Child plays in the Hatikva synagogue. Image by Janet Abrams

The bus parks on a cobbled hill.

We exit into the milling crowd and pass through a gateway in a corrugated metal wall, painted in vertical blue and white stripes, under the watchful eye of a rifle-toting guard. Past the plastic-laminated ‘house rules’ in English and Amharic (no electronic devices, long skirts required for ladies), we enter a small courtyard where young kids are hanging out, their shy expressions breaking into ravishing smiles on eye contact.

Beyond in a flat-roofed, open-sided space — more like an agricultural shed than a holy sanctuary — we behold an apparition from ancient time: Rows of black female faces framed in white, woven cotton “natila” shawls that wrap their heads and upper bodies, silhouetting them against the darkness. We find places among them on simple metal benches. They bend in a V from the hips, shuckling vigorously, five year olds eagerly imitating their mothers. Every few moments, they call out “Amen,” shifting from Major to Minor keys, their chants punctuating a male voice from the other side of the mechitzah partition. The Chazzan’s monotone alternates between Amharic and Hebrew, though it takes a keen ear to discern the shift. Even those sections of the service recited in the latter tongue — such as the Shema and L’Cha Dodi — sound different. Each Hebrew syllable is pressed out, with a percussive rhythm reminiscent of African dance. 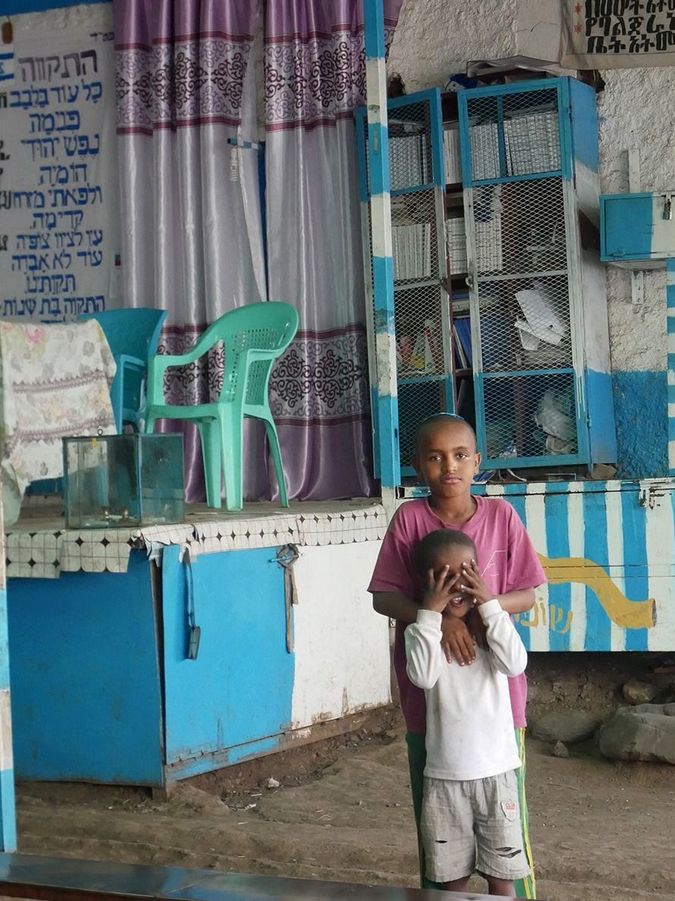 Ethiopian Jewish children in front of the ark in synagogue. Image by Janet Abrams

This is Kabbalat Shabbat at the “Hatikvah” synagogue in Gondar, northern Ethiopia, in early November. Londoners of various Jewish stripes, we’re here on a tour organized by Jewish Renaissance magazine to meet the Ethiopian Jews That Time Forgot. Our guides are Rabbi Sybil Sheridan of West London Synagogue, an expert on Ethiopian Jewry and co-founder of the British-based charity Meketa; and Abye Tilahun Lakew, of local Jacaranda Tours, a walking encyclopedia of Ethiopian history and culture.

The story of Ethiopia’s rediscovered “Beta Israel” Jewish community is by now familiar: the 1980s and 1990s airlifts that brought some 23,000 of these descendants of the “lost tribe of Dan” (according to one theory) to Israel, whisking them from their Biblical-era lifestyle to the 20th century in a few hours; their ecstatic welcome followed by struggles to integrate into Israeli culture.

Less well known is that some 9,000 Ethiopian Jews (by current estimates) remain in Ethiopia, primarily in the mountainous north around Gondar, and in Addis. These Jews — the Zera Israel — are ineligible for immigration under the Law of Return, as some of their forebears converted to Christianity in the 19th Century to avoid persecution. Israeli politics and culture, and differences between Ethiopian Judaism and Halachic Judaism (the former acknowledges patrilineal descent; the latter, matrilineal), have conspired to keep these remaining Jews stuck, waiting for over a decade to make Aliyah. The Jewish Agency closed its Gondar office in 2013, having declared there were no more Jews in Ethiopia. 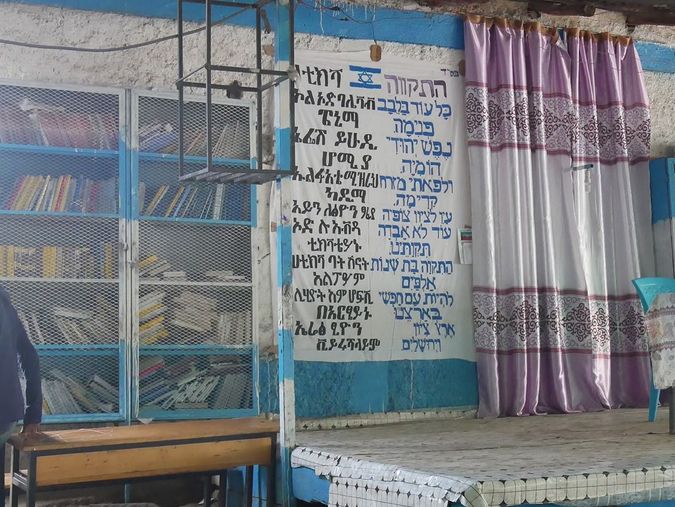 Ark in the Hatikva synagogue — with the lyrics of ‘Hatikva’ emblazoned on it. Image by Janet Abrams

Yet when Ethiopian-Israelis were asked to identify first-degree relatives still living in Ethiopia, the total of remaining Jews was almost double the previous estimate. Following visits by Israeli officials, the emigration process re-started in March 2017. Since then, 1300 Ethiopian Jews have been allowed to leave for Israel, but another 8000 are still waiting to do so.

I notice that some young women in the rows behind me have small, square-shaped crucifixes tattooed on their foreheads. But here they are, nonetheless, praying fervently in an Orthodox synagogue, their ardor for Judaism palpable, their zeal for (their notion of) Zion a rebuke to red-tape-wielding Israeli bureaucrats and religious arbiters.

Our bus reached Gondar just in time for the outdoor, mid-day Kabbalat Shabbat service at the After School Club run by Meketa, which has picked up, in terms of community support initiatives, where the Jewish Agency and NACOEJ (the North American Conference on Ethiopian Jewry) left off. 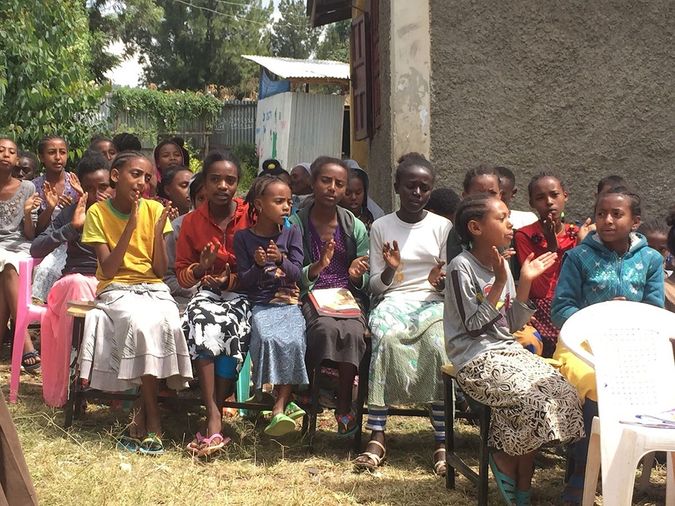 Several dozen boys and girls, age 7 to 16, are joyously singing Hebrew songs. After the service, led by a teenage boy, each child receives a bread roll and a banana. We unpack gifts: books, chalks, and crayons get applause, but a dozen deflated soccer balls (plus pumps) get a loud roar of approval. Inside the Club’s tiny classrooms, two bookshelves carry a few books, mostly on math and sciences; posters of Israeli leaders hang beside maps of Israel and Africa. In the Weaving Studio on the same compound — a former cow shed — three older Jewish men are making cotton tallitot with various colored stripes and rainbow-colored kippot (available for purchase via Meketa). 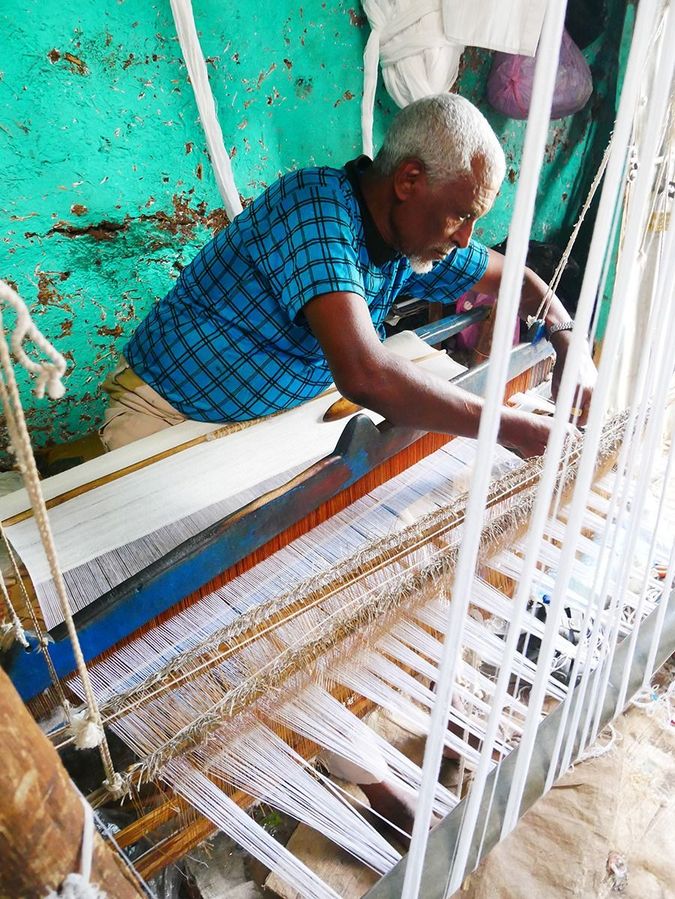 Over the weekend, we meet representatives of other charities: Kindu Trust and Link Ethiopia (with whom Meketa partners) and Ploughshare, based in Woleka, a former Jewish village outside Gondar. The latter charity teaches single mothers to weave, grow produce, and make pottery using local clay and modern Japanese-donated kilns — including coffee pots in the style developed by erstwhile Jewish potters. (Historically, Jews and Muslims did ceramics and metalwork, since Christians avoided working with fire).

We visit the Jewish cemetery in the rolling countryside, guided by Ermias (a variation of the name ‘Jeremiah’), a bright young man who explains the community’s burial and mourning customs in fluent Hebrew. Crossing a river, we enter the cemetery to find ourselves interrupting a stone-setting ceremony: mother and aunts, in black, keening over a lost son, the bright blue paint on his tomb still wet. We gesture our condolences, and climb past the mourners, up the hillside lot, donated by a non-Jewish landowner. Formal tombs, squeezed in at all angles amid bushes and thistle-like plants, have recently supplanted graves marked only by loose stones; “yeladim” are buried to one side, hidden among the trees. Later, our guides report that the mourners had misinterpreted our sudden appearance as some kind of answered prayer, and were disappointed when we’d left without offering them money. It’s one of several moments on the tour when the disparity between our means (and freedom of movement) and theirs— comes home with a thud. 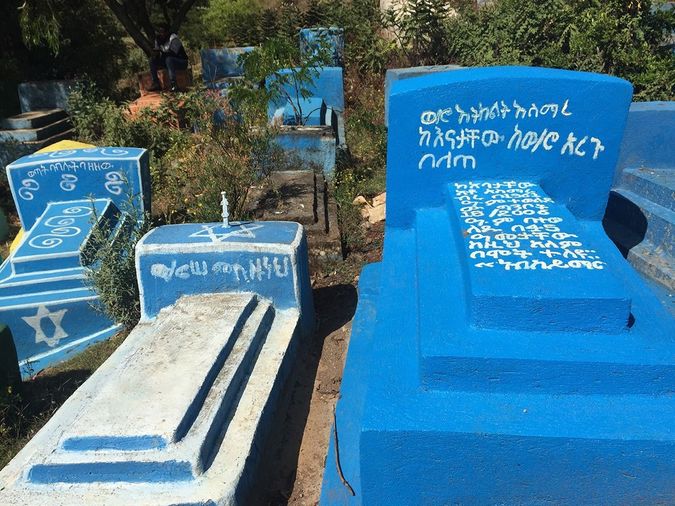 Returning to the synagogue, Ermias — a counselor at Ethiopia’s sole Bnei Akiva youth group — shows us around the different age-group “classrooms” off the main sanctuary, where a few posters and hand-painted Hebrew phrases brighten the metal walls — a minimalism hard to imagine, for anyone accustomed to the (by comparison, opulent) décor of Western synagogues. 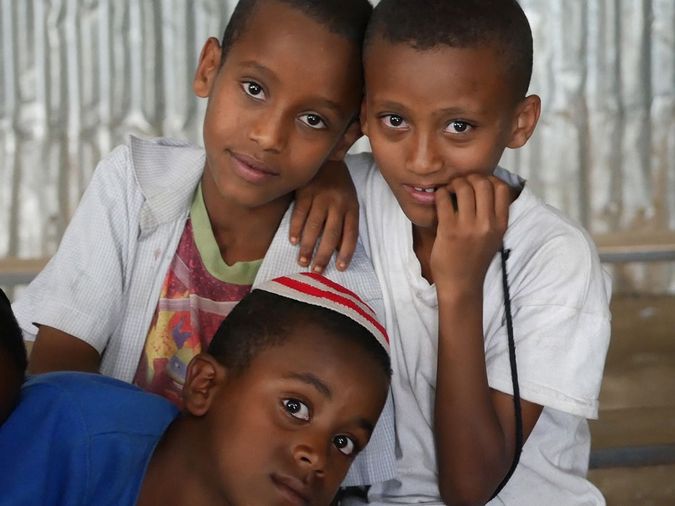 But if these spaces seem modest, our eyes are truly peeled open later that afternoon, in the nearby Jewish quarter.

Off a small courtyard, where kids are playing, is a dirt alley strewn with charcoal stoves, firewood, and cooking equipment. A continuous mud wall is pierced by corrugated metal doors, which admit to one-room homes, approximately 10 feet square, occupied by up to six people (two adults, four children). In the home I visit, a couple of light bulbs hang on strings tied across the room; basic foodstuffs are on plastic shelving in one corner; in another, the family’s entire wardrobe is piled in a clear plastic bag, its contents barely visible in the darkness. Cooking is done outdoors; latrines are “up the hill,” behind the houses.

Our hostess, a young mother (perhaps mid 20s, perhaps older — it’s hard to tell), explains how her family came to Gondar, expecting imminent departure to Israel. That was ten years ago. Her brave smile collapses, as she recalls her former village; here in the city, unskilled for urban life, her husband is a day laborer. She offers us coffee; touched by her hospitality, we gently decline, fearing for our stomachs, but reach into our wallets and give her the next month’s rent. Her face visibly brightens. Next door, we learn later, the family’s suitcases are gathering dust, never unpacked. 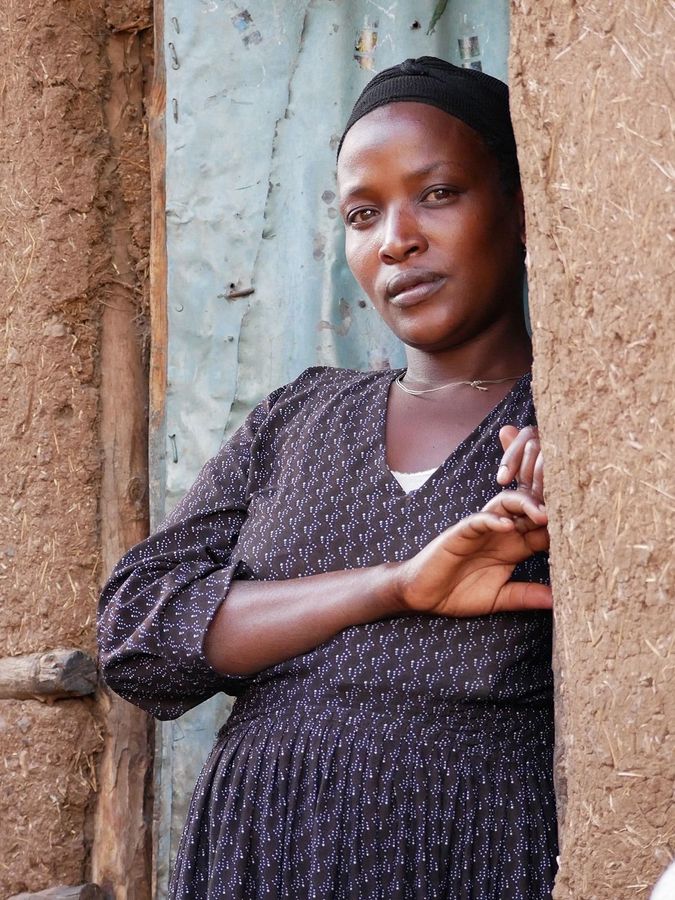 From Gondar, we climb to 10,000 ft for a (freezing cold) night’s stay in the Simien Mountains, hike among the native gelada gibbons, then spend eight hours on the bus winding around hairpin bends snapping views of the jagged peaks and fertile valleys, descending to Axum, where the original Ark of the Covenant is supposedly housed in a church only one monk may enter. In Lalibela, we remove our shoes every twenty minutes, to visit the rock-hewn churches of this 12th century “New Jerusalem,” a UNESCO World Heritage Centre.

The paradox is not lost on me. We’ve just been among Ethiopian Jews hankering for actual Jerusalem, and now we’re touring a labyrinth of crepuscular churches, designed to reproduce Jerusalem within Ethiopia, since the Christian pilgrimage to the Holy Land was, at the time of their construction, too perilous.

Reaching Addis the following Friday, our bus parks by the kerb, and we wait for our designated host. The local denizens peer quizzically at us through the bus windows. Minutes pass. The waiting feels weighty. Maybe we won’t see the synagogue after all.

At last, a young man with lush curly black hair arrives — he’s rushed across the city in the melée of Friday rush hour, from his job as an Israeli embassy guard.

Before Kabbalat Shabbat, Tigabu Worku shows us around Tikvat Zion synagogue compound, which is smaller than Gondar’s and has recently moved from the Jewish neighborhood, some distance away, due to rising rent. We stand outside the Mikvah, asking questions about the community’s current situation. Speaking in Ivrit (which many young Jews here seem to command alongside their native Amharic), he says there’s no knowing when any particular family member will be able to join relatives already in Israel. The order of departures is seemingly random, unrelated to age, or how long someone has been waiting.

I ask how he and his fellow Ethiopian Jews tolerate the limbo — not knowing when, or if, they’ll ever get to make Aliyah.

He answers with conviction and a bright smile. A member of our tour group translates:

Janet Abrams is an artist, writer, editor and independent producer, raised in London but now based in Santa Fe, New Mexico.