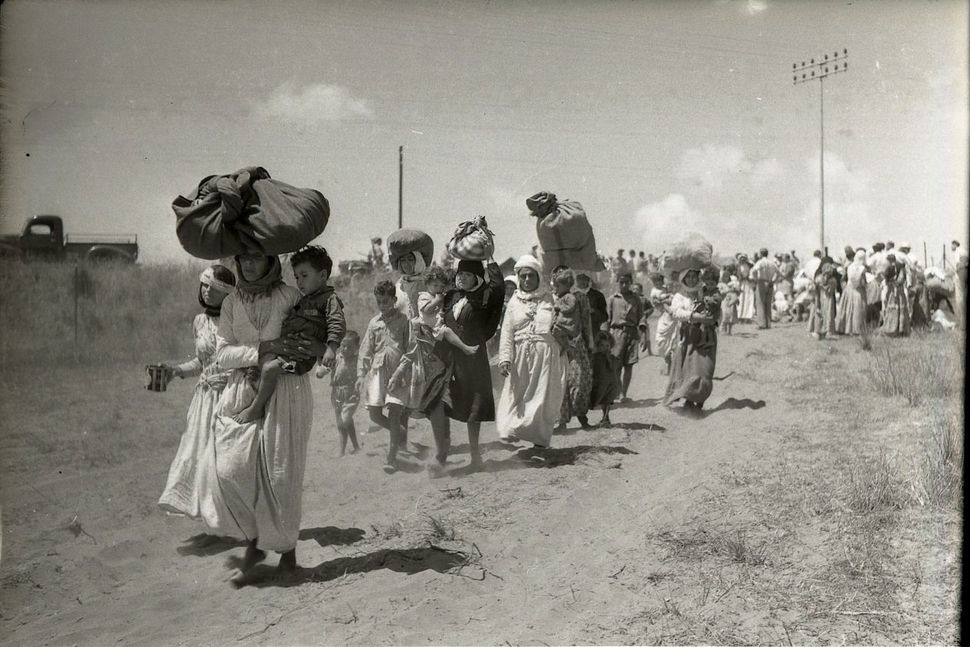 June, 1948: The expulsion of Tantura women, children and elderly from Furaydis to Jordan as the Red Cross supervises. Courtesy of Israel State Archives from Ben Rothenberg Collection

One week after the establishment of the State of Israel in 1948, (and three days before the Israeli Defense Forces were created), a large-scale massacre of more than 200 Arabs allegedly occurred in the Palestinian village of Tantura. This event was one incident in wars from 1947-1949, a period that Israeli Jews call the War of Independence. Palestinians use another term: Al Nakba, or the Catastrophe.

The details of what occurred at Tantura have long been disputed, with some Israeli Jews claiming nothing happened and most reluctant to even talk about it. By not acknowledging the massacre at Tantura, the government has committed to not addressing this issue.

A new documentary by an Israeli director that had its world premiere Jan. 20, the opening night of the Sundance Film Festival, explores what happened. The film by Alon Schwarz – called, simply, “Tantura” — also examines why the Nakba is taboo to discuss in Israel and what happened when one person questioned the details of this event.

Schwarz stumbled upon the story of Teddy Katz, who in the late 1990s had conducted extensive research into Tantura, compiling 140 hours of audio interviews with dozens of Jewish and Arab witnesses to the battles. Based on these oral testimonies, he wrote a master’s thesis at the University of Haifa that argued that the IDF’s Alexandroni Brigade carried out this atrocity.

Though initially well-received by the university when it was submitted around 1998, when his paper went public on Jan. 21, 2000, in the Israeli newspaper Maariv, Alexandroni veterans sued Katz for libel. His thesis was later rejected by the university and his reputation was ruined – Katz also suffered a stroke just weeks before his first meeting in court. The legal case questioned the accuracy of the oral testimonies upon which his assertions were founded. Katz, still alive though in poor health, claims he was coerced to write an apology, which he says is his greatest regret. He recanted almost immediately.

But the audio testimonies remain. 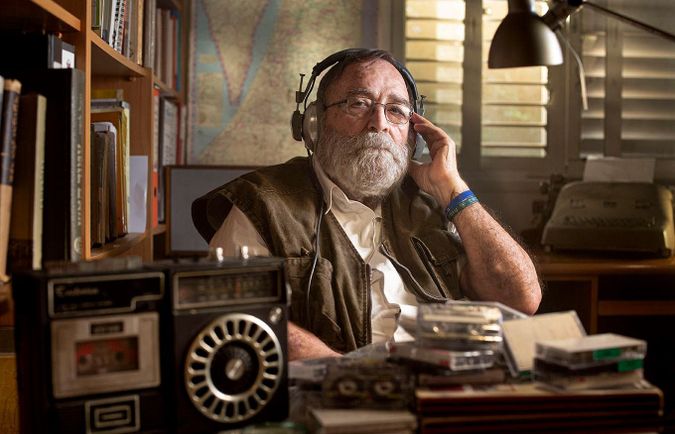 The film relies heavily on these interviews, conducted in Hebrew, though Schwarz also interviewed several former soldiers, many in their 90s, as well as professors, kibbutzniks, a judge from the case, and Arabs about their recollections. He not only listened to hours of audio interviews from decades ago, he incorporated forensic evidence as well as geographic photos and analysis.

“It’s a cinematic rollercoaster,” said his brother, Shaul Schwarz, who produced the film, “hearing these tapes and having these people sit in front of the camera in the last years of their lives and need to puke out this truth or deny their truth.”

He was referring to the interviews in “Tantura” of elderly former soldiers who unburden themselves by relating acts of war they witnessed or, chillingly, committed themselves. Others said they do not remember the events in Tantura or refuse to speak about them. “We all have these inner secrets,” Shaul Schwarz said, “we all have dark sides we deal with as countries. Do you choose to be truthful or do you choose to bury your secret?”

The events described in “Tantura” came on the heels of the Holocaust, when many Jews were deeply traumatized, fearful, full of anger and panic. It may be difficult for civilians to imagine being a young soldier heading into battle and dealing with such terrifying events. While most ex-soldiers were ready to candidly share their recollections, a few were still firmly committed to taking their secrets to the grave. Some veterans recalled one or two individuals whose actions clearly crossed the line into something more monstrous.

Alon Schwarz says he has compassion for the soldiers of the Alexandroni Brigade. “I think we’re truly not judgmental,” Schwarz says, “the only thing we are judgmental about is telling the wrong story for so long.” But looking back on the events of 1948, Alon admits, “I don’t know that I would have done anything different if I lived in that period.”

Schwarz describes growing up like many Jews did, learning about the founding of the State of Israel as “a land without a people” when the Jewish pioneers arrived, a pure nation with the most moral army in the world. “I love Israel,” he says, “I’m a proud Israeli and Zionist, but like many countries we’re founded on blood. We took another people and threw them out, and in this day and age we need to say it. There needs to be some acknowledgment that the founding myth isn’t what we were told.” Schwarz’s hope is to “create knowledge and understanding within Israel, first and foremost about our own history, a history most of us don’t know about. It’s uncomfortable, so people don’t talk about it, but institutionally Israel has not been very open about releasing archives. We have to say ‘this is where we were wrong, and we acknowledge and we apologize, and we want to go forward to a better place.’”

Shaul Schwarz admits that after making “Tantura” something changed for him. Now when he is walking around Israel he asks himself, “I wonder who lived in that house, or I ask friends ‘do you know who lived here?’”

“I was depressed for a very long time,” says Alon Schwarz about the period after making the film. “It shook my whole world as it shakes Israelis’ world when they watch it. I drive around Israel and I see all these ruined houses on the side roads and suddenly it’s like, ‘OK, this was a village.’”

“American Jews often feel that they have to be 100 percent supportive of the Israeli government in order to be considered a good Zionist,” he says, “For me, loving Israel means aspiring to have a better country, a better democracy and a more open country. It means being independent thinkers. It’s good we acknowledge that we have a diverse population that includes non-Jews that are equal citizens, that they have rights and are part of our country.”

Schwarz believes that peace between Israelis and Palestinians is possible – and that talking about the “Nakba” can help. “Tantura is their tragedy,” he said, referring to the Palestinians. “It’s not comparable to the numbers of the Holocaust, but it is comparable for the personal trauma that these people went through. It’s a multi-generational trauma.

“We showed the film to a couple of Palestinians and they said it’s an eye-opening document because it’s finally some acknowledgement. That’s why we focused the film on Israelis and why we’re proud that Israelis put out this message. It’s important that it comes from us.”

“It’s pretty obvious that things happen that we are not proud of as a nation,” he says, “the best way to go forward is to expose the wrongdoings.”