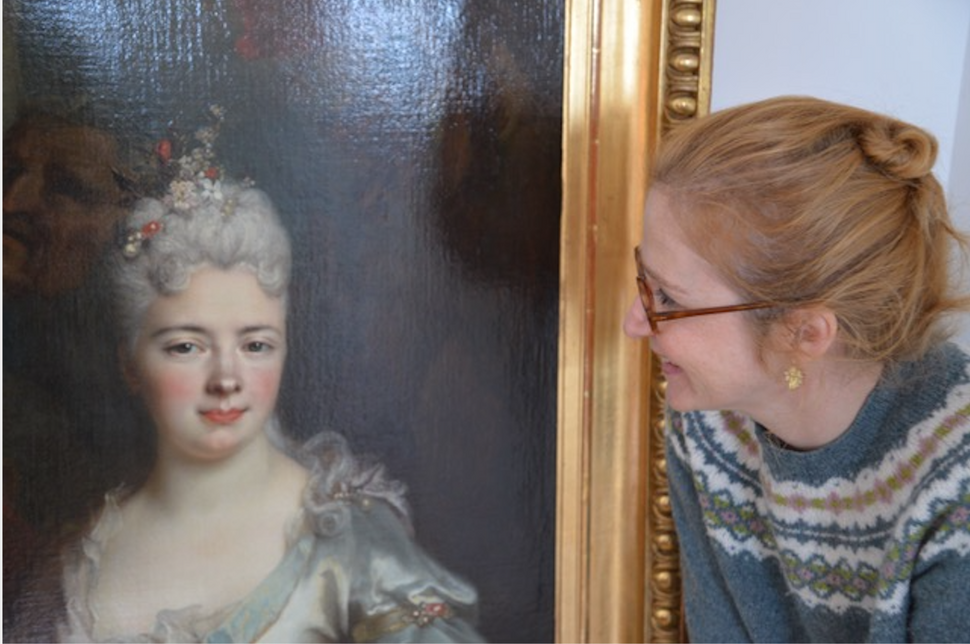 On Sunday, Pauline Baer de Perignon stood in front of the Marquise de Parbére for the last time. The painting of the Marquise, the mistress of Philippe II the duc d’Orleans, by Nicholas Largilliere is on exhibition at Sotheby’s New York in advance of an auction this Thursday. It is in New York City thanks only to the dogged efforts of de Perignon, the great-granddaughter of a renowned Jewish art collector in Paris in the years leading up to World War II. His collection, which numbered more than 500 paintings, included works by Degas, Monet, Pissarro, Renoir, Cézanne, Fragonard, Rubens, Titian, Gauguin and more, and was looted by the Nazis during World War II.

In her newly-released book, “The Vanished Collection,” the English translation of her bestselling book “La Collection Disparue,” published first in France, de Perignon recounts her discovery of the immense art collection of her great-grandfather Jules Strauss and her Odyssean quest to track down the works looted by the Nazis. In the end, she was able get some of Jules Strauss’ stolen art, like the Largilliere painting, returned to her family. It is a feat that her great-grandmother was unable to achieve, despite a 16-year claims process with the German government after World War II.

On the wall at Sotheby’s, the Marquise gazes out at you with an almost unnerving directness. “She is confident, she is powerful,” said Calvine Harvey, vice president and Specialist of Old Master Paintings at Sotheby’s told me when we visited last week. One wonders what stories the Marquise has seen and what she would have made of the Nazis who stole her.

Some of those stories are recounted in “The Vanished Collection,” a page-turning book that is part detective story, part personal journey. Despite no background in art, de Perignon manages to successfully penetrate the often-opaque world of art restitution through pluck and perseverance, while uncovering an unspoken part of her family history.

At a concert in 2014, de Perignon had a chance encounter with a cousin she had not seen in two decades. He worked at Sotheby’s London. “Do you know there was something shady about the Strauss sale?” he asked her, referring to a 1932 art sale in Paris of Jules Strauss’ collection. Details were disclosed in whispers in the concert hall, with her cousin concluding, “I think Jules was robbed.”

This set de Perignon off on an obsessive, multi-year quest taking her deep into the archives of France and into the meeting rooms of the world’s most famous museums. Once she located some of the lost works of art, she had to prove not only that they had once belonged to her great-grandfather but also that they had definitively been stolen or sold under duress during the war. 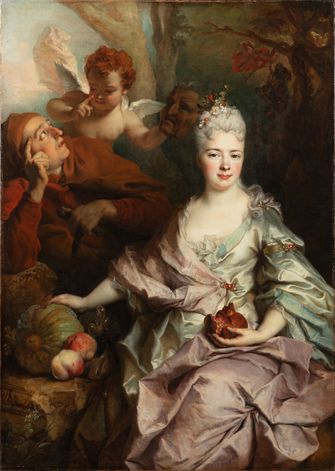 The Marquise A painting by Nicholas Largilliere of the mistress of Philippe II the duc d’Orleans. Courtesy of Sotheby's

The Largilliere painting, usually referred to as “The Portrait of a Lady as Pomona,” had been owned by Jules Strauss from 1928 until 1941, when he was forced to sell it following the German occupation of France. Selling his art collection meant that he and his family might survive the war, and possibly avoid the fate of de Perignon’s great uncle, a decorated World War I officer who was deported and murdered in Auschwitz.

The painting was acquired by the German Reichsbank in Berlin in 1941, discovered in a safe in the German Democratic Republic’s Ministry of Finance, and transferred to the National Gallery in Berlin in 1953. In 1959, it was moved to the Staatliche Kunstsammlungen museum in Dresden where it was on display until 2021. Through de Perignon’s staunch efforts, the painting was restituted to the Strauss heirs and sent to de Perignon’s apartment in Paris.

“The Portrait of a Lady as Pomona” is a “museum-quality masterpiece,” said Harvey, and that in her 12 years at Sotheby’s she has “never seen a Largilliere painting at this level or close to it.” It is expected to sell for $1 to $1.5 million.

“I think I had nothing to prove, and the story was a strange adventure. I never waited for any success of any kind,” de Perignon told me, adding that it had been “a very, very personal quest so I wasn’t afraid. I knew I couldn’t lose in a way because everything was new to me.

“I would learn something and I would discover things,” she told me. 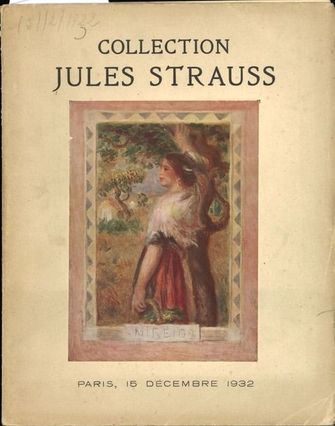 A Collection Lost: Jules Strauss had more than 500 paintings, included works by Degas, Monet, Pissarro, Renoir, Cézanne, Fragonard, Rubens, Titian, Gauguin and more; they were looted by the Nazis during World War II. Courtesy of Sotheby's

In France, World War II can be a taboo subject within families. The betrayal of French Jews is still raw, the trauma unresolved. Some families, like de Perignon’s, simply suppressed it.

“It took me a long time to understand that it depends on the generation. Just right after the war, the people who had survived this war — Jewish people, Jewish families — they didn’t want to talk about it because it had been so painful, so difficult,” de Perignon said. “They had lost either family members or relatives, so they didn’t want to talk about it. They just wanted to live and to survive. The next generation after was raised with no will to talk about it either. It was too traumatic. So it took two generations so that people could be able to talk about it. For me, it’s not that painful because I was born in the ‘70s, so I can deal with the issues I think a bit more easily.”

In the book, de Perignon also questions what it means to be Jewish for her and for members of her family, which converted to Catholicism during the war.

“Someone told me in the harsh way, ‘You know, you’re not Jewish. Your mother is Catholic so please don’t bother us with that.’” de Perignon told me. “I thought, ‘Oh my gosh you’re right. From a strict point of view, you’re right.’”

“But I feel interested in these Jewish roots and what’s left, and the art of questioning oneself all the time about my own identity, which is very Jewish,” she added. “But what is fun is that my son is more Jewish than I am because his father is Jewish. And he’s very happy. He says, ‘Ah, it’s good that you’re questioning yourself!’”

Asked if she had any recommendations for Jewish families seeking to discover the history of their lost art collections, de Perignon advised first conducting research closer to home before heading into the archives.

“The thing that people don’t do very much is asking family because even [if] they say ‘I know nothing,’ then they remember,” she said. “They might say something like ‘Ah yes, we had this lawyer and he helped us in Germany.’ So that’s something. They always keep papers and letters that they forget they have. So you have to insist a lot.”

Details that might emerge from a letter or a notebook are critical, she said. “When you claim for the restitution, they ask you many things,” she recounted, “You always have to prove that it belonged to you. So you have to show, for example, in this catalog it was written ‘Lent by Jules Strauss.’ If you don’t know that, they will never give it to you.”

Although the restitution of the paintings was not de Perignon’s original objective, the deeper she dug the more that did become her goal. Still, what was most meaningful was the untold story of her family. She said, “What was important was to understand what happened during the war and all I didn’t know. I wanted to get some memories back and to know a bit more about my family.” 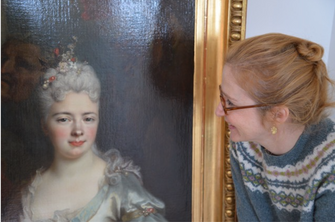 An underlying theme in de Perignon’s story is just how difficult it can be to get looted artwork back, even if the records show it had been seized by the Nazis. While many works are still in private collections or still missing, many others are in museums, hanging on the walls or in storage. It takes curiosity and determination to track the paintings down, gather the necessary information, and convince a museum to turn it over. In some cases, legal means are necessary, such as in the case of the Camille Pissarro painting that was recently the subject of a Supreme Court hearing. For “The Portrait of a Lady as Pomona,” the museum eventually restituted the painting back to the Strauss heirs. Other families have not been so lucky.

Hopefully, de Perignon says, her book will inspire people to be “curious about their history. You can still get to know your ancestors. And you can still find things in the archives. You can find the truth, if you want, if you are willing to.” Over the weekend, she flew from Paris to New York to be at the Sotheby’s auction. She is here she said, “to follow my lady Pomona and then I will say goodbye.”

Nicholas Largilliere’s painting of the Marquise de Parbére is on display to the public, by appointment, at Sotheby’s New York until the auction Thursday.

Michelle Young is the founder of Untapped New York. She holds a degree in the History of Art and Architecture from Harvard University and a master’s degree from Columbia University Graduate School of Architecture, Planning and Preservation, where she is an Adjunct Professor. She has written for The Guardian, Hyperallergic, Curbed, and Business Insider and her photography has been published in the Wall Street Journal and the New York Times. She can be reached at @untappedmich.