He made Moon Knight Jewish. He doesn’t care if Disney+ has other ideas. 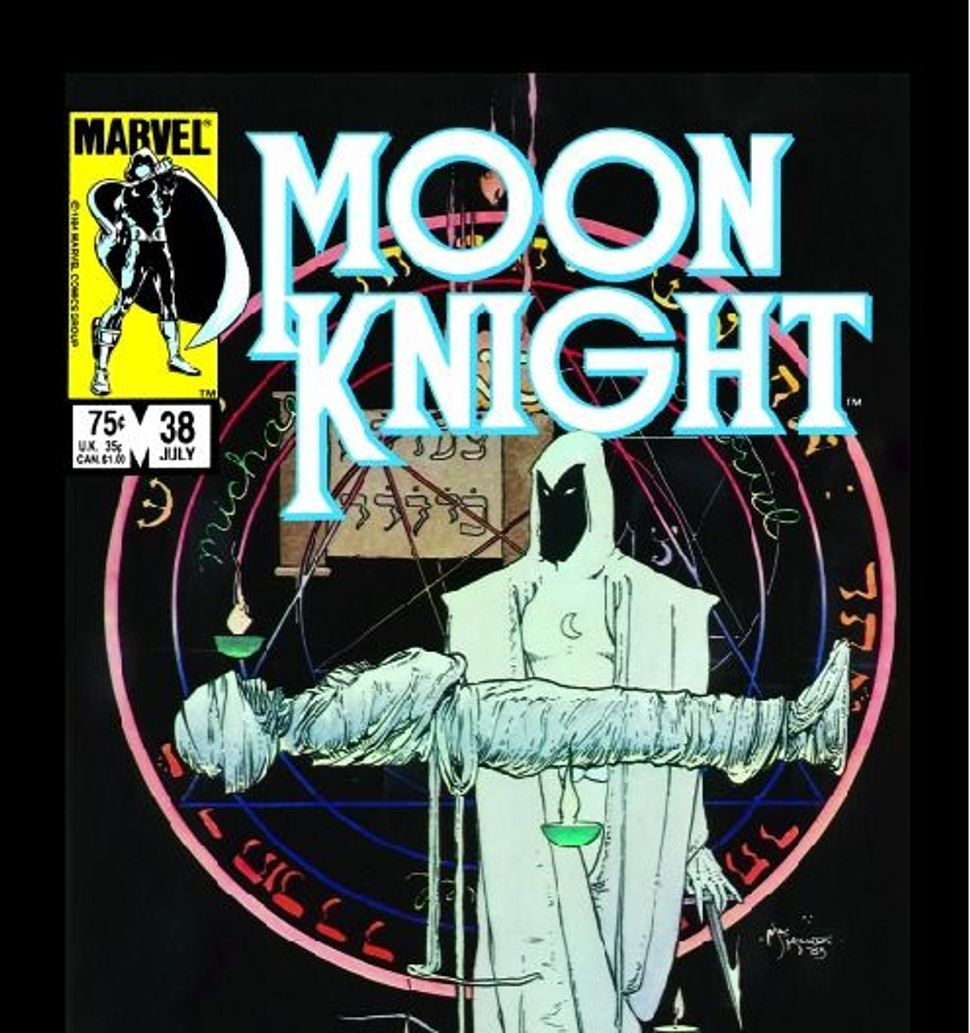 Moon Knight – aka Marc Spector, aka Steven Grant, aka Jake Lockley, aka the vessel of Khonshu – has an identity crisis. At least some of the time, that crisis is a Jewish one.

Stretching over many comic runs and iterations, from his first introduction as a silver-clad mercenary in a 1975 issue of “Werewolf by Night,” to his first live-action turn in a forthcoming Disney+ show, Moon Knight’s story often lacks narrative consistency. There are a few constants, though: Moon Knight wears a white cloak, looking a bit like a photo negative of Batman, and his real name is Marc Spector, a former mercenary from Chicago. That he is also a Jew is happenstance.

“It was all an accident,” his creator, Doug Moench told fellow Moon Knight writer, Charlie Huston. “I didn’t say, ‘I’m going to sit down and create a Jewish character.’”

Instead, he named Moon Knight’s true identity, soon to be subsumed by “Wall Street wizard” Steven Grant, after a guy he knew that worked at a comic book store. When he learned Marc Spector was a Jewish name, Moench says he researched a bit about Judaism and “stuff about the Mideast and Mossad” to include in his stories. But the full depth of Spector’s Jewish background wasn’t revealed until the end of the character’s original run in 1984, courtesy of a Jewish day school principal turned comic writer named Alan Zelenetz.

In the 1980s, Zelenetz stepped down from his position at Solomon Schechter High School in Brooklyn. He cold-called people at Marvel looking for work, and, eventually, managed to make his way to the office through a string of acquaintances (and bribing the receptionist in the lobby with some Pepperidge Farms). After proofreading for a while on a volunteer basis, he started writing for Thor and Conan the Barbarian and eventually took over Moon Knight.

Zelenetz, who also served as Judaica advisor on Darren Aronofsky’s film “Pi,” says Moon Knight’s backstory was not a “conscious Jewish decision” designed to break barriers. But the choice nonetheless recalibrated the character and the Jewish makeup of the Marvel canon.

While Moench’s early issues of delved into Spector’s desire to divorce himself from his violent past — as Marc was a soldier for hire before he devoted himself to fighting crime on behalf of an Egyptian moon deity named Khonshu — Zelenetz took a more “Freudian” approach. It wasn’t just the violence Moon Knight was running from, it was also his rabbi father.

In issues #37 and #38 of “Moon Knight,” Spector, long living as Steven Grant and Moon Knight (it’s confusing; later runs would establish that Spector has dissociative identity disorder), learns his estranged father, Elias, is dying. With that news, Spector must confront his early life and the tradition he left behind. 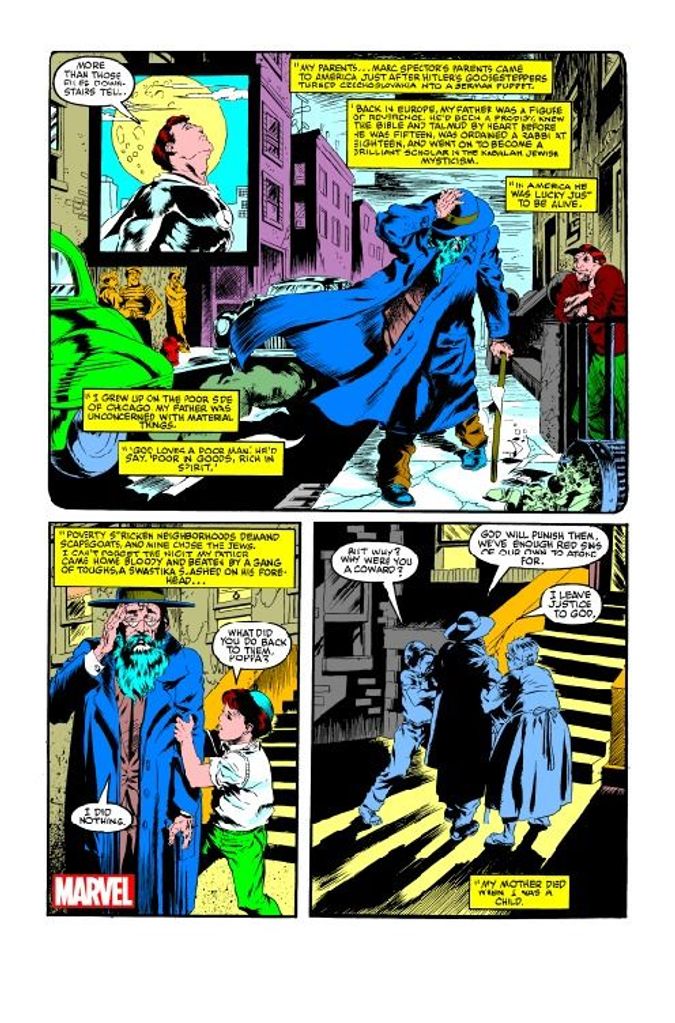 Marc Spector, who renounced that name and its violent past to live as Steven Grant, reveals his background to his love interest Marlene for the first time.

In a few pages, Spector reveals his hidden roots. He was born a poor Orthodox kid to parents who fled Czechoslovakia “just after Hitler’s gooseteppers” moved in. Spector was ashamed of his father, a celebrated Kabbalist who passively endured the brutal antisemitism of their Chicago neighborhood. Rejecting his father’s pacifism, Spector becomes a fighter, pivotally (and Oedipally) punching Elias when he interrupts his boxing match. The next day Spector enlists in the Marines, later becoming a ruthless mercenary.

Over Zoom from his home in Teaneck, N.J., Zelenetz, now working on a translation of the Book of Hosea, says that the two-issue story, in which Elias Spector dies and is revived using a golem-like incantation, came from a few places. He had spoken with his editor, Dennis “Denny” O’Neil about leaning into Spector’s Jewishness, but he was most excited to write the baddie of the story: a hooded Jewish mystic named Zohar, named for the foundational book on Kabbalah.

“It was sort of the mischief of taking a holy book and turning it into a Marvel villain,” said Zelenetz, who takes a somewhat “jaded view” of the Zohar as divinely inspired.

And so Zohar, the supervillain, uses the “divine spark” as a weapon and God’s secret names to bring his mentor back to life. Along the way Zohar also pays kids to desecrate a Jewish cemetery to cover his tracks as he robs Elias’ grave. 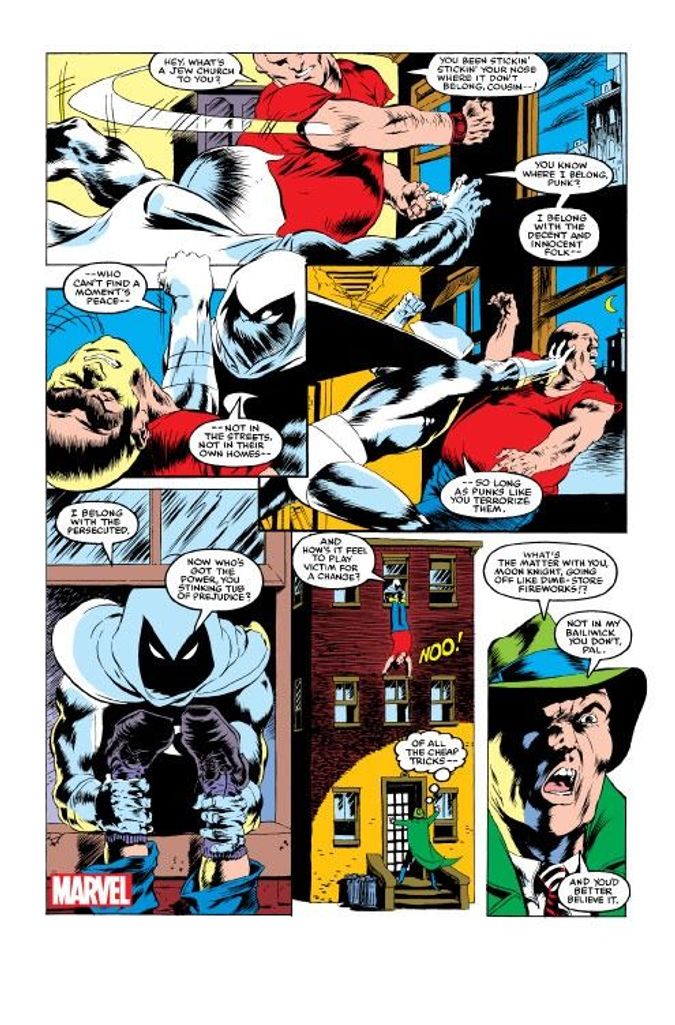 Moon Knight pummels the perpetrators of a synagogue arson. “I belong with the persecuted,” he says, “Now who’s got the power you stinking tub of prejudice?” (Zelenetz apologized for the pulpiness of this dialogue.)

The choice to include the vandalism of a Jewish cemetery makes Moon Knight #37, penciled by Bo Hampton, one of the first mainstream comics to explicitly address antisemitism. And it’s not even the only instance in the issue. In its earlier pages, Moon Knight spots a burning synagogue while on patrol, likely becoming the first Marvel character to rescue a Torah scroll — and beat the pulp out of the arsonists.

By portraying some of the vandals as white supremacists and others as clueless kids, Zelenetz was happy the comics didn’t “broad brush” the topic of antisemitism. And at the same time as he was having fun with Kabbalah, he strived to be respectful by giving readers the option of thinking of concepts like the Sefirot as “legend and myth” belonging to Jews. With the mischievous notion of the Zohar villain and the memory that one of Yeshiva University’s schools was named for a Kabbalist named Rabbi Isaac Elchanon Spektor – thus informing Elias Spector’s character – everything fell into place for the conclusion of Moon Knight’s first solo run.

Zelenetz credits O’Neil with giving him the space for Spector’s lengthy thought-bubble epiphany: that he and his father share a “moral zeal” and Moon Knight carries on “the very same values” he once rejected as an inheritance. 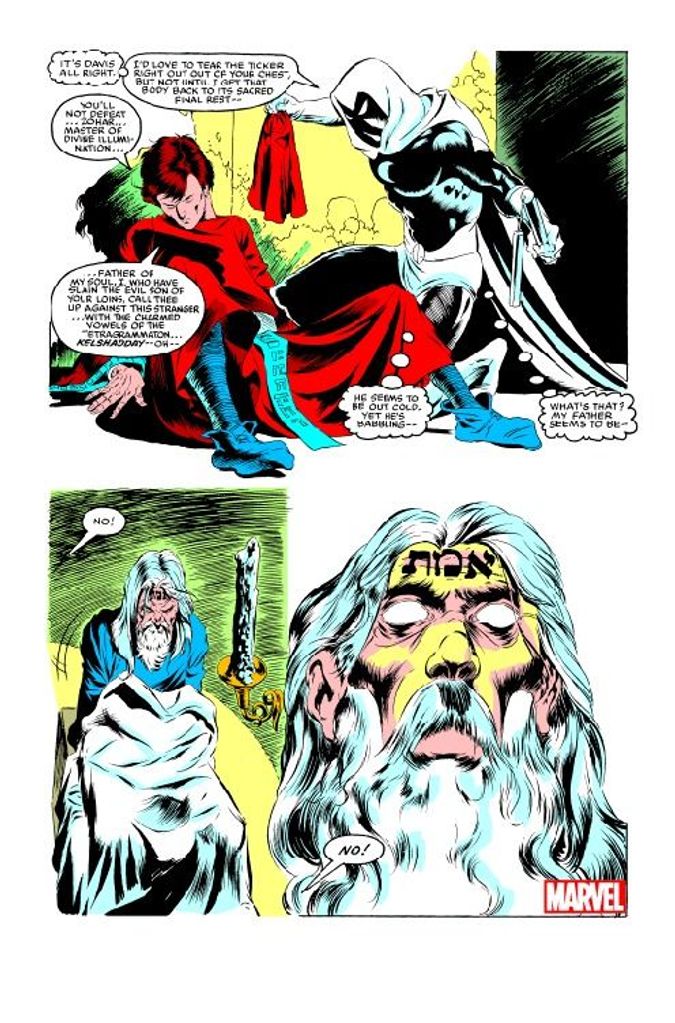 Moon Knight unmasks Zohar, learning he’s a student of his father. Then, Elias’ body awakens, reanimated by the word “Ehmeth.” Not quite the father-son reunion either hoped for.

“I think as pulpy and as silly as the writing overall might have been, there may be a germ of what came later when it was picked up that he was indeed Jewish and had multiple personalities,” said Zelenetz. He didn’t write Spector’s diagnosis because, for Zelenetz, the issues hinged on the fact that Moon Knight, living under the alias of Steven Grant, was trying to escape his true self.

“This was Marc Spector,” Zelenetz said. “Though he preferred Steven Grant for all the obvious reasons.”

One obvious reason is that Grant is rich — and appears to be a gentile. 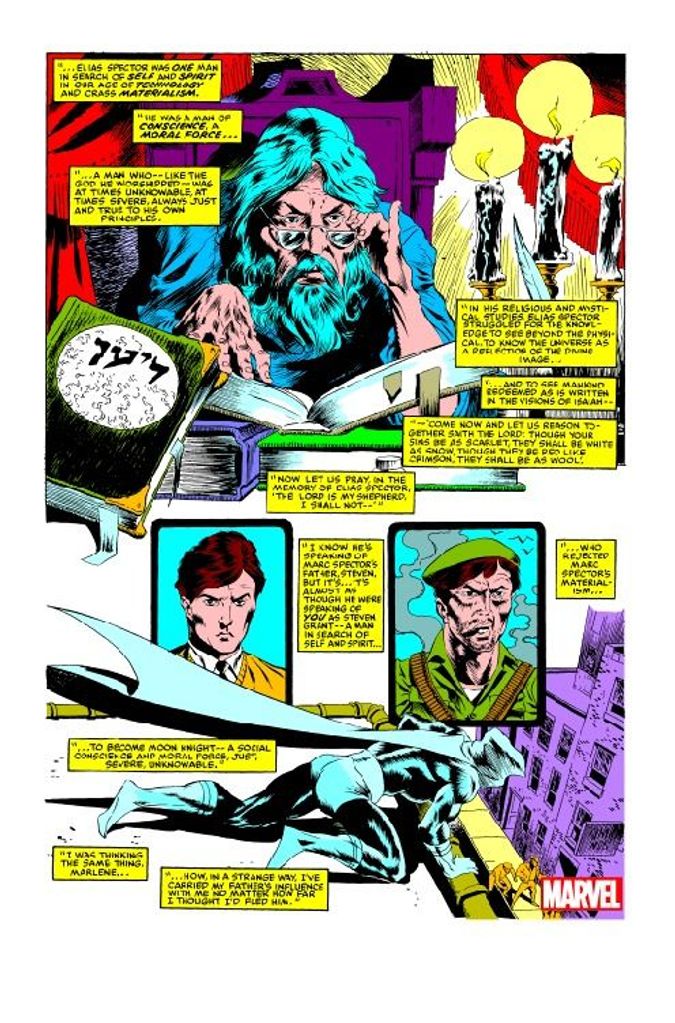 As Elias Spector is eulogized, Marc Spector realizes he has a lot in common with his father. “In a strange way,” he tells Marlene, “I’ve carried my father’s influence with me no matter how far I thought I’d fled him.”

Since Zelenetz gave Moon Knight his Yiddishkeit, different writers have handled it differently. Some overlook it for a greater emphasis on Spector’s increasingly violent vigilantism and mental health issues, which often involve visions of his eldritch patron god, Khonshu. But others have chosen to engage with the Jewish question.

In 2018, Max Bemis, a comic writer, frontman for the band Say Anything, grandson of Holocaust survivors and someone who described himself as a “a Jew who is also a Christian” wrote a pretty cringey “origin” issue of Moon Knight, in which it’s revealed that Spector’s disorder stems from learning his father’s friend Yitz Perlman was secretly a Jew-torturing Nazi. (Yitz, really named Ernst, later inducts Spector into a secret society by having him kill a dolphin — don’t ask.) Bemis also has Spector misunderstand what the “Chosen” designation of Chosen People means, flattens Jewish identity down to jokes and Jerry Seinfeld and, somehow, has young, Orthodox Marc Spector – who lost family in the camps – learn about the birds and the bees before the Shoah.

The issue (#194) is not great, though it ends on a nice note, picking up the theme of family trauma and tough conversations as Spector tells his daughter about hereditary mental illness. 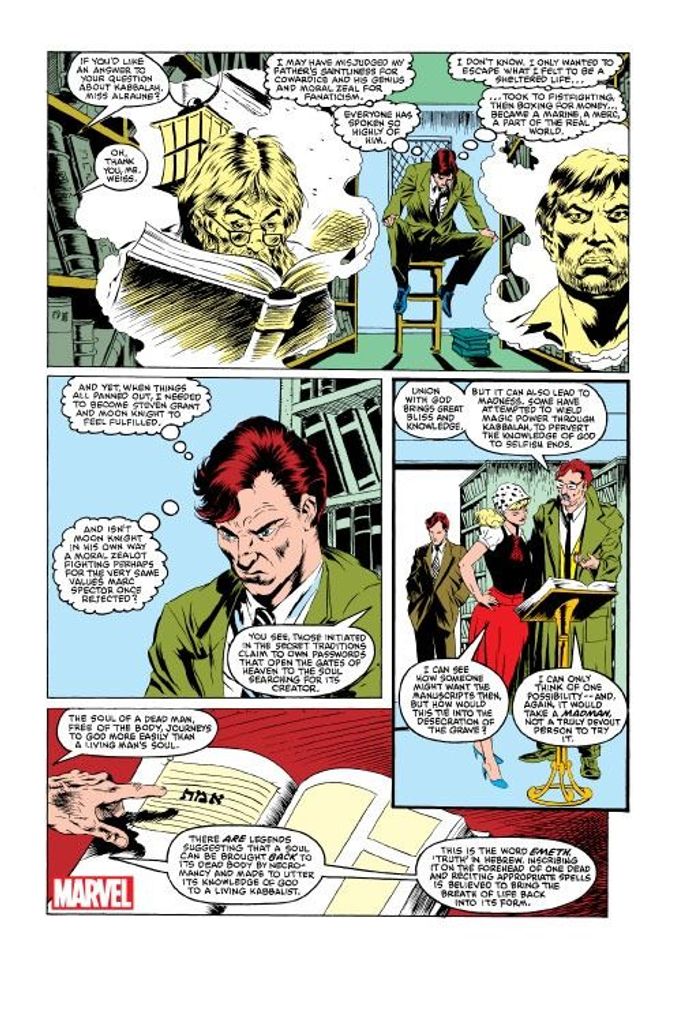 A rabbi from Elias Spector’s seminary explains Kabbalah to Marlene, as Marc Spector reflects on his decision to leave his old life behind. Note the Emeth in the last panel, the same word said to animate golems.

More recently, in a 2021 comic, Moon Knight’s regular therapy session (another pretty Jewish thing about him) touched on some of the same frameworks Zelenetz set up. Spector tells his shrink that his father’s peaceful nature made him wrongly perceive him as a “weak man serving an indifferent God,” and that the indifference of that God led him to embrace Khonshu.

Joshua Isaak on Screenrant, did a good job explaining the ways this story, by writer Jed Mackay and artist Allesandro Cappuccio, plays into the trope of the silently suffering “righteous Jew” and falsely insists that fighting back runs counter to a Jewish ethic of perseverance.

It remains to be seen if the origins Zelenetz laid out will factor into the “Moon Knight” show, and the casting of the non-Jewish Oscar Isaac has activated a certain portion of the internet clamoring for Jewish representation.

“They’re certainly not bound by any origins,” said Zelenetz, whose character Arthur Harrow (who he doesn’t remember creating) will be played by Ethan Hawke in the show.

“All of a sudden the Jews need to be represented,” Zelenetz said, reproducing some of the online chatter about the show. “Moon Knight has to be Jewish — ‘Oh, we’re watching Marvel! The boycott is around the corner.’ I can smell blood in the water already! ‘How could they not make him Jewish? Oscar Isaac is not Jewish, even though he has the name “Isaac.” And they’ve got an Egyptian director — what’s going on here?’” 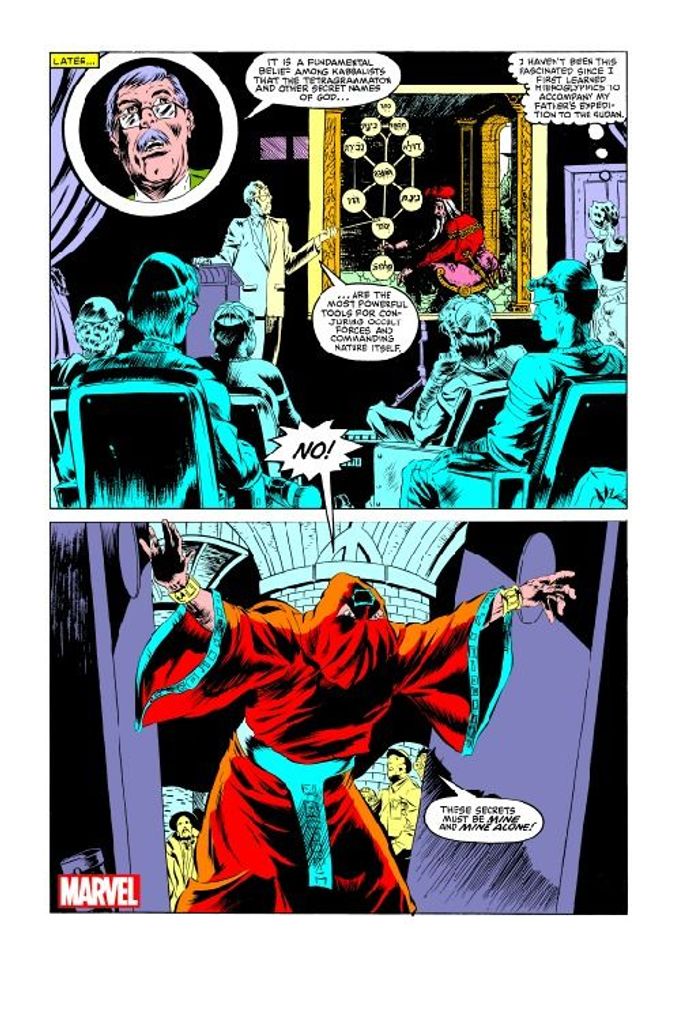 Zohar bursts into a Kabbalah class, in which the Tree of Life is appears in a slide.

That said, Zelenetz, who, before penning a comic book primer in Kabbalah, only brought Yiddishkeit to the Marvel office in the form of Wednesday bagels, does see potential to explore another side of Marc Spector’s convoluted identity.

He made Moon Knight Jewish. He doesn’t care if Disney+ has other ideas.