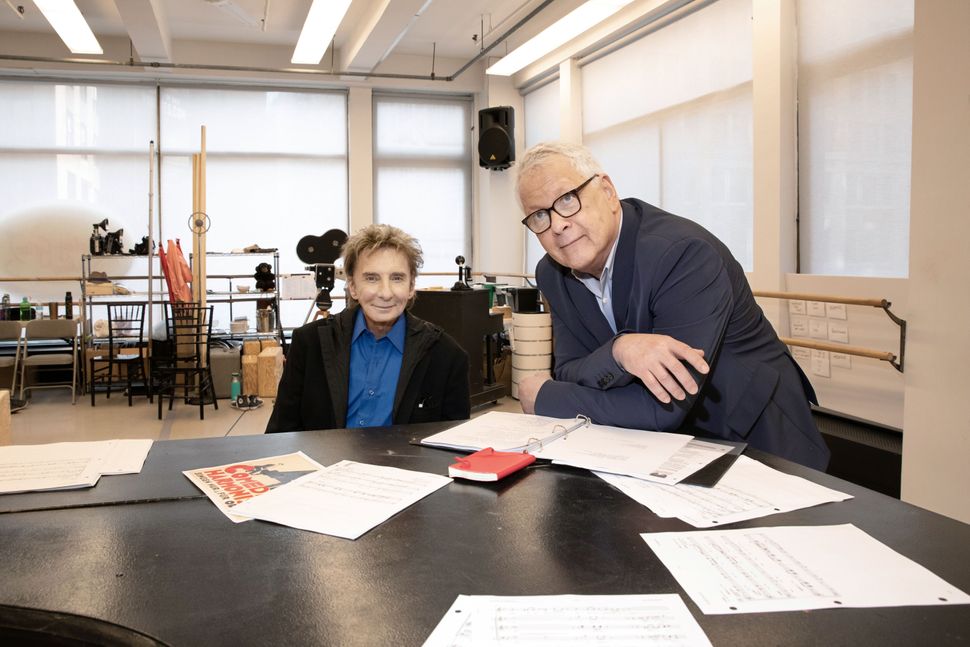 Barry Manilow and Bruce Sussman at rehearsals for their musical “Harmony.” Photo by JULIETA CERVANTES

Barry Manilow never meant to become a pop star, and his Grammy, Emmy and Tony-winning career as a songwriter is a source of perennial tsuris for his lyric-writing partner Bruce Sussman.

If you ask them, “Mandy” came, gave and (forget what you heard) did some taking. That breakout hit diverted the pair’s original ambition: writing for Broadway.

“It stopped us from having the time to do something like this,” said Manilow, who debuts the latest iteration of his and Sussman’s musical “Harmony” April 14 at the Museum of Jewish Heritage.

Now being produced by the National Yiddish Theatre Folksbiene, “Harmony” is about the Comedian Harmonists, a sextet of Jewish and non-Jewish Germans who were one of the biggest acts in the world, before the rise of the Third Reich doomed them to obscurity.

“The reason we don’t know this group is because the Nazis annhilated everything that they did,” said Manilow. “All their movies, all their records: Gone.”

Sussman said that the Harmonists’ legacy partially survived because of German fans who hid 78s under their mattresses. “Harmony” is in part an effort to secure the singing group’s place in history alongside acts like the Four Freshmen. The show is also a big swing from a songwriting duo who’ve long aimed to enter the musical theater canon.

With previous productions in La Jolla, Atlanta and Los Angeles, it is the men’s longest single endeavor in their five decade partnership – and also their most Jewish.

I spoke with Sussman and Manilow (the latter of whom said his grandfather loved the Forverts) from the Museum of Jewish Heritage, where they were sitting in on rehearsals for a play that is still evolving over 20 years after its first curtain call. The following conversation – which features a discussion on dueling cantors – has been edited for length and clarity.

How did you first hear about the Comedian Harmonists?

BARRY MANILOW: Go to it, Bruce.

BRUCE SUSSMAN: I read a review in The New York Times some years ago for a documentary that was playing at the Public Theater – they used to have a screening room down there. I don’t think it’s there anymore.

SUSSMAN: (Laughs) And it was a very compelling review with a very compelling photograph and I said ‘Gee, I think I need to see this.’ And I went down there and saw four hours of German documentary filmmaking with subtitles and, you know, it wasn’t exactly my idea of a fun night, but it turned out to be life-changing. I couldn’t believe the story I was seeing, nor could I believe that I didn’t know anything about it – that I didn’t know who this group called the Comedian Harmonists were. So I ran to a payphone and called Barry, who was living in California, and told him, I said “I think I found it. The property that we’ve been wanting to musicalize.” We had been offered shows and always turned them down, they didn’t speak to us, but I said “I think this will speak to you.” And it did.

MANILOW: This is a big story, and it took us quite a while to make it palatable so that you can do it in two acts, because this is a big story – but a compelling story. Because they were so famous in their day, around the world. 13 movies they made, millions of records they sold – Carnegie Hall. And they were so inventive. These were the Hi-Lo’s, the Four Freshmen, Take Six and the Marx Brothers. They were so inventive and so popular and Bruce and I had never heard of them. Why hadn’t we heard of them? Well, that’s our story

SUSSMAN: That turns out to be the story: why we didn’t know who they are is the story of “Harmony.”

I know you had previous versions. How has it changed?

SUSSMAN: We were anticipating a freshening up of the script, a rewrite to some degree, but when the pandemic hit we started meeting with our director Warren Carlyle every Tuesday and Friday on Zoom. And in one of the early meetings I put forth a really big idea. We did this massive rewrite, a big change in the storytelling, and we committed to it. We couldn’t have done that if we were in production. The pandemic, ironically gave us a creative opportunity we wouldn’t have had.

You’re doing this with the Folksbiene, and this seems like a more explicitly Jewish project than most of your work. How did your backgrounds inform it? Or maybe that’s what made it attractive.

SUSSMAN: Well they came to us

SUSSMAN: This is a play about remembering in part. And our lead character struggles to remember and he ultimately finds redemption through remembering, and I’m sitting here in a building where every stone was built dedicated to remembering, so we couldn’t find a better first home in New York than this place.

Bruce alluded to a big story change. Can you tell me what that was?

MANILOW: I didn’t hear that

SUSSMAN: Can we tell him what the big change is?

On the topic of Jewishness. We recently ran this piece on the 150 greatest Jewish pop songs. What do you think is your most Jewish song? Maybe Lola is secretly a Jewess?

SUSSMAN: No, no, no, no. What’s our most Jewish song? Is there a song in “Harmony” that’s particularly – the wedding maybe?

MANILOW: Oh, sure, the wedding!

SUSSMAN: There’s a wedding sequence in “Harmony” that’s probably the most Jewish thing we’ve ever written. The wedding is the most deeply, dyed-in-the-wool Jewish thing.

MANILOW: I have dived deeply into the cantorial music in order to start the wedding with two cantors singing together.

MANILOW: We called it dueling cantors!

SUSSMAN: But like the rye bread, you don’t need to be Jewish to enjoy “Harmony.”

Right and the story of course is very Levy’s Rye – the partnership between Jews and non-Jews.

SUSSMAN: It’s harmony in the broadest sense of the word.