‘The Marvelous Mrs. Maisel’ undercuts its own feminist and Jewish identity 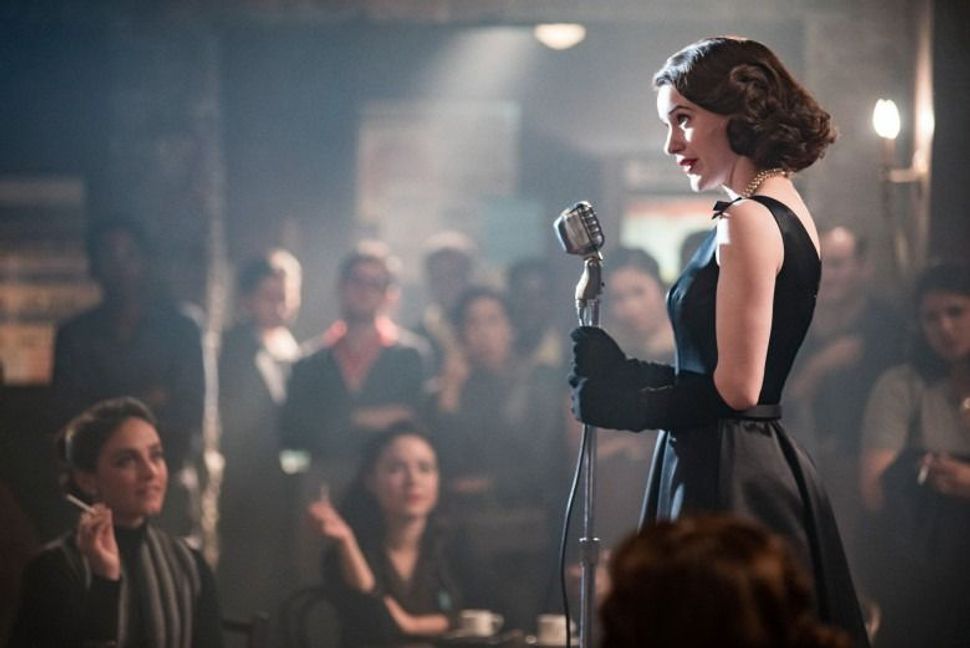 “Do what I say and not what I do,” seems to be the catchphrase for the newest season of “The Marvelous Mrs. Maisel.” The fourth season sees comedy prodigy Miriam “Midge” Maisel rejecting the rules of a man’s world and attempting to have it all — her Upper West Side lifestyle, her job and her family’s approval — as she attempts to make it in standup. But for all the season’s grand messages about feminism and Judaism and changing the world, the bulk of the show still relies on cheap humor and overdone bits, which undercut its own moral stances.

In the opening episode of the season, Miriam rails against men, who, she says, are constantly trying to screw up her life. She’s done listening to them, and says she wants to do comedy her way — that means no opening acts and no compromises about what she can say, meaning she turns down gigs left and right. This is feminism! Or so the show would have us believe.

The show takes the same approach to its Jewishness. In the second episode, Miriam rolls her eyes at another comedian’s lazy use of Judaism as a punchline — apparently something she would never do. This show would never stoop to such levels!

It’s a rather meta point for a pointedly Jewish comedy to make — especially one that does, in fact, tend to lean on Jewish stereotypes for easy punchlines. And its supposed feminism is just as inconsistent, with Midge taking opening gigs even as she waxes poetic about her refusal to do exactly that. It is as though the show’s writers hope that saying something is convincing enough to distract viewers from the fact that, in fact, the opposite is taking place.

When Lenny Bruce tries to help Midge, using his connections to get her a prestigious opening act, she acts as though he’s trying to destroy her; she’d told him about her “manifesto” against such jobs. But she agrees to open for her nemesis, Sophie Lennon, and takes a prim gig at a Kennedy fundraiser where she can’t make bawdy jokes. Is the issue here that she refuses to take help from a man, even though he is trying to help her?

This isn’t principled; it’s privileged and petulant. You can’t just materialize fame by pure force of will without working your way up. You can’t materialize Upper-West-Side-apartment and private-school money simply by declaring it so. You can’t behave badly and be surprised by the consequences.

The show takes a similarly clear, moral stance on its own identity in Jewish comedy. No stereotypes and no cheap jokes, it promises in an episode where Midge blows raspberries at a Jewish comedian for his hacky jokes. “Ha ha ha, I’m JEWISH,” she jeers.

Yet Miriam’s parents’ neuroticism, mother-in-law Shirley’s aggressive attempts to set her son up with a nice Jewish girl, a bar mitzvah that devolves into community infighting — these stereotypes turn up in every episode. “Ha ha ha, this is a JEWISH show,” viewers might jeer.

To be fair, Jewish standup acts did historically rely on a lot of pat jokes about nagging mothers or neuroticism. But the show has plenty of space outside of its stage routines to explore its characters’ real lives without leaning on caricatures.

The only time in the show where the show portrays Judaism in a sensitive — and accurate — manner is in the final episodes of the show, when Miriam’s father-in-law, Moishe, nearly dies of a heart attack. While Moishe is unconscious in the hospital, Abe and Shirley debate the existence of God; Abe is convinced God doesn’t exist, while Shirley believes, but thinks God is cruel. But neither position has any impact on their Jewishness — the perfect example of the complexities of Jewish identity, which can encompass so many different beliefs and approaches to life. It’s too bad that the show doesn’t emphasize the Jewishness of this moment the way it does for nagging or matchmaking.

Perhaps the show has deep faith in its audiences, expecting them to pick up on the irony of Midge’s choices; they’re hard to miss. In the final scene of the season, Lenny Bruce scolds her for her stubbornness, and we get a hint of self-awareness from the show. But in the other episodes, no one else criticizes her; even Susie, her manager, simply accepts her choices. Midge’s bad behavior is obvious to viewers, but it still seems as though the show is urging us to support her unquestioningly.

And it would be a large leap of faith to expect the same for the Jewish jokes, especially for a mainstream show that can’t depend upon having a majority-Jewish audience. Of course, there can be jokes, but when the characters’ Jewishness is never highlighted in tender moments or thoughtful ones, when history and community aren’t part of it, then it’s reductive, especially for a show that so emphatically positions itself as Jewish.

“This is good Jewish representation!” the show seems to trumpet. But just as Midge can’t quite figure out how to stand behind her convictions, neither can “Mrs. Maisel.”

‘The Marvelous Mrs. Maisel’ undercuts its own feminist and Jewish identity