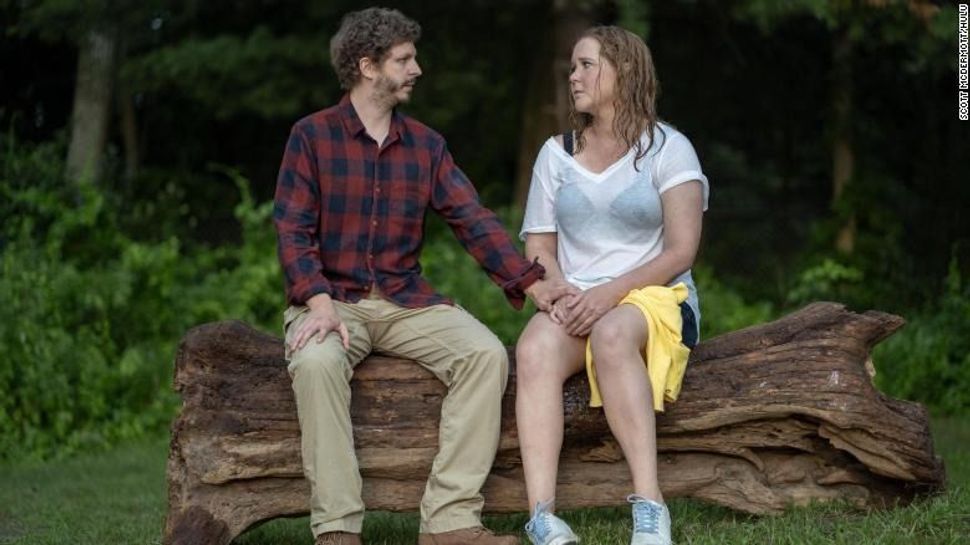 Amy Schumer and Michael Cera in “Life and Beth.” Image by Hulu

What does it mean to be a Jewish TV show?

Sometimes the answer is obvious. Shows like “Shtisel” and “Unorthodox” are set in deeply Jewish communities; “Valley of Tears” and “Our Boys” take on major events from Jewish history.

Then there are shows like “The Marvelous Mrs. Maisel,” which seems to scream “THIS IS A JEWISH SHOW” at you every episode. (Whether it’s authentically Jewish is a different question.)

In the case of “Life and Beth,” Amy Schumer’s new dramedy on Hulu, the answer gets blurrier. Sure, Schumer herself is Jewish, and the show, which is largely autobiographical, mentions Judaism often. But it’s also nearly identical to another, largely autobiographical show from another blonde, female — but non-Jewish — comedian, Bridget Everett: “Somebody, Somewhere,” on HBO.

Both shows follow a woman, around age 40, who has returned to their small hometown in the wake of a family death — in Schumer’s case, her mother, and in Everett’s, her sister. Each works a dead-end job, has a fraught relationship with their surviving family and reconnects with a childhood hobby. The shows even have overlapping casts — both feature Murray Hill — and Schumer and Everett have worked together and are real-life friends.

Religion is one of the only things that separates the stories, though it’s present in both. It’s not just that Everett deals with Christianity, Schumer with Judaism — it’s how religion functions. Judaism, to Schumer’s character Beth, is a foreign body; for Everett, Christianity is similarly uninviting, but over the course of the show, religion is allowed to grow into something richer and more complex.

In “Life and Beth,” Judaism isn’t exactly a punchline, but it’s not far off. For example, early on, Beth’s friend Maya, a church-going Black single mother, decides she’s only dating Jewish men. “I love everything about the Jews, your style, your swag, your dancing around, bouncing people around in chairs and stuff like that,” she says. “I love a circumcised dick.”

That’s not quite all there is to Judaism — in a fleeting moment, Maya’s new boyfriend, Shlomo, who functions largely as comic relief, tells Beth he only became observant in the wake of his father’s death, explaining that he found the rules for how to grieve comforting. Yet we quckly move on; the show has moments of sincerity, but is, at its core, a comedy without much time for religious depth.

Instead, for most of the show, Judaism manifests as alienation; after her mother dies, Beth numbly acquiesces to whatever the Jewish funeral home prescribes — she sits in an unfamiliar synagogue with unfamiliar chanting and, for some reason, a tuneless performance on the recorder. While Jewish grieving rituals may be meaningful to Shlomo, they are awful for Beth, and for the rest of the series, she can’t get over how wrong the ceremony felt. Eventually, she decides to redo the funeral, this time with no religious elements, and finds the experience deeply healing. 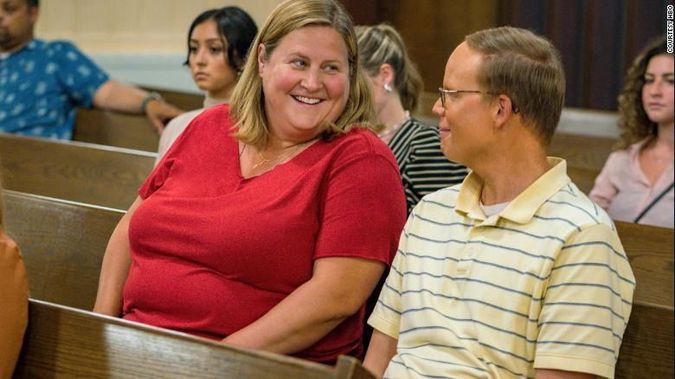 Bridget Everly in a church pew during “Somebody, Somewhere.” Image by HBOMax

In “Somebody, Somewhere,” religion — in this case, a bland, unspecified middle-American Protestantism of some kind — takes a much more central role. Everett’s character, Sam, is suspicious of church; she sees it as repressive. Yet she ends up joining a group known as choir practice, a queer gathering run semi-secretly in a church, and slowly finds meaning and healing through the community she builds through the worshipful experience. Choir practice is devoid of any overt religiosity aside from its meeting place — it consists mainly of karaoke performances — but it’s just as much pastoral care as a Sunday service; in fact, its leader is invited to be a lay minister.

Given the similarities between the two shows, it’s hard not to directly compare their treatments of religion, and feel that Judaism is given short-shrift. Everett subverts the usual script of a backward small town poisoned by its close-minded church; “Somebody, Somewhere” is earnest and sophisticated in its exploration of the potential of secularized religion. Schumer’s portrayal of Judaism is shallower and more off-putting; Jewish practice blocks her ability to connect and heal. It makes me want to point out that Jews pioneered secular religion, that Judaism, too, has the potential to be flexible and rewarding, a source of community and meaning and connection.

Some of the greater nuance afforded Christianity in “Somebody, Somewhere” is because it is simply a subtler show; Schumer’s work is often raunchy, and “Life and Beth,” though sensitive at times, is still a somewhat formulaic comedy. But the depiction of Judaism in “Life and Beth” is also honest and nuanced in its own way.

Even as Judaism is foreign to Beth, it’s constantly present. She frequently references the fact that she’s Jewish, even though she knows so little about its rituals and practice that, at one point, she replies to Shlomo’s “Shabbat Shalom” with the quintessentially Catholic “and also with you.”

This is the reality of many secular American Jews — and I know because it was my own experience until, as an adult, I dove into Jewish practice. Growing up, I attended a Seder here and there, but we rarely went to synagogue, and when we did, I found it unapproachable; I was too unfamiliar with the ritual to engage. I didn’t have a strong foundation in Jewish history or culture or food either. My Jewish identity largely manifested as simply knowing I was Jewish; Beth’s Jewishness seems to operate on similar terms.

There are a few other shows that have portrayed this ever-present-yet-absent version of Jewish identity well – “Broad City” is a great example – but it’s more common to portray secular Judaism with stereotypes of overbearing mothers and nose jobs. Schumer’s rendition might have its issues, but it never slides into clichés, and even if it’s not particularly complimentary, it’s also not disparaging or critical.

And I can’t exactly fault Schumer for not approaching Judaism with as much subtlety as Everett did small-town church in “Somebody Somewhere.” After all, both shows are autobiographical, and if that’s how Schumer experienced Judaism, who am I to say it’s missing something?