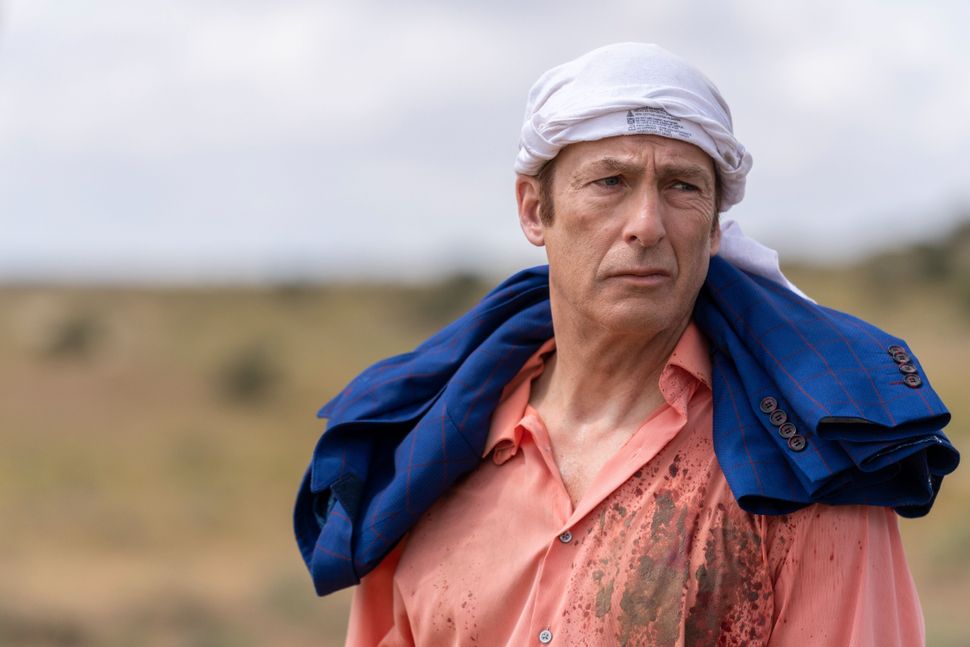 In Season 5 of “Better Call Saul,” our hero butchers a biblical metaphor.

Seated at a swanky restaurant with his late brother’s law partner Howard Hamlin, Jimmy McGill, who just assumed the professional name Saul Goodman, answers a question about his new identity.

Saul Goodman is “the last line of defense for the little guy,” Jimmy says. “If you’re getting stepped on, he’s a sharp stick. You got Goliath on your back, Saul’s the guy with the slingshot.”

Jimmy clearly sat out that day of Sunday school. David was the guy with the slingshot. Saul was the king he fought for. What’s more, in the world of “Better Call Saul,” Jimmy’s brother, Chuck, is a far better stand-in for the first Jewish monarch. He was on top of the world until a debilitating mental illness and, in many fits of pique, lashed out at Jimmy, the younger, favored child who he was meant to mentor.

Jimmy’s mistake reveals the cavalier manner with which he chose his new name – a pun on “S’all good, man” and a nom de grift he used when he sold burner cell phones. It would be silly to read too much into the Jewish implications beyond the fact, stated in the character’s introduction on “Breaking Bad” that the “homeboys” he represents all “want a pipe-hitting member of the tribe.”

The choice to capitalize on the association of Jews and the legal profession suggests more about Jimmy’s prejudiced clientele than Jimmy himself. But the new identity nonetheless signals the show’s concern with personal branding and reinvention, themes that have no small biblical precedent.

Names matter in the world of “Breaking Bad” and “Better Call Saul.” Walter White – who builds a meth-centered mythology under the name Heisenberg – has an ironically pure surname (which memorably combined with business partner Elliot Schwartz’s to make the company Gray Matter). Jesse Pinkman’s last name connotes a certain naivete. Colorful cartel monikers – Nacho, Tuco, No Doze – abound. Jimmy McGill, who will later be re-christened as a Cinnabon manager named Gene Takavic, stands apart from these many sobriquets by defiantly renaming himself.

Born a “potato eater” in Cicero, Illinois – a fitting provenance for a fellow with a legalistic gift of gab – Jimmy is the son of shopkeeper father Chuck, Sr., whom he considered an easy mark, and who Chuck, a model of legal probity, called “the personification of good.” The name McGill was respected in the community, and, when Chuck later helped build the firm of Hamlin, Hamlin & McGill, excelling as a criminal lawyer, it became known to the Southwest. (McGill means “son of the stranger” and, as Midwesterners in Albuquerque, the brothers are strangers in a strange land.)

Jimmy signs away this goodly birth name after appealing to be reinstated as a lawyer. And yet, it is a rousing show of familial penance – making amends for the betrayal of his brother – that got him there.

“If you decide and I get to be a lawyer, I’ll do everything in my power to be worthy of the name McGill,” he tells the New Mexico State Bar, moments before applying to practice as Saul Goodman. It is under that name that he loses most of his claim to goodness.

“I can’t go back to being Jimmy McGill,” he tells Kim, his partner and later wife. “Jimmy McGill the lawyer is always gonna be Chuck McGill’s loser brother. I’m done with that. That name is burned.”

He burned it himself by betraying Chuck, the brother who couldn’t see him as anything more than “Slippin’ Jimmy” the con man. The simplest explanation for Jimmy’s rebirth is the hatred of the brother who hated him. This is as ancient as Cain and Abel, Isaac and Ishmael or Jacob and Esau. And whether series creators Vince Gilligan and Peter Gould know it, the masculine generational conflict of Chuck and Jimmy, Hector Salamanca and Gus Fring, Walt and Jesse and Walt Jr. (who changes his own name to Flynn) also plays out the dynamic of Saul and David’s falling out. Only here, Saul’s chucked spears are often bullets.

There remains a question of when exactly Jimmy completes the transformation to Saul Goodman. It’s not when he signs the DBA form. It’s not when he watches the the tearful family of his client’s victim at a courthouse. Jimmy’s point of no return came, naturally, in the desert.

Sent to retrieve two bags of money for drug lord Lalo Salamenca’s bail, Jimmy is caught in a shootout and has to make his way on foot through the scorching New Mexico sun. Emerging from the crossfire of a cartel war, accompanied by a wise elder in Mike Ehrmantraut, he is forever changed.

The scene might recall the biblical Saul’s long search for his father’s donkeys, during which he meets the prophet Samuel, who anoints him king. Jimmy, drinking urine and stepping into cacti, here becomes king of the mess he made. His ignominious downfall is foretold. It’s a path that will force him to change names again. But, even in his flash forward life as Gene, toiling at a shopping mall in another state, he’ll be made by a stranger who remembers him as Saul, a flagrant serial advertiser in garish suits and a bad toupee. That is his legacy.

If Jimmy wanted to escape the name McGill, he succeeded. Unlike the many figures in the Bible whose names were changed by God, Jimmy did it himself, better recalling a New Testament figure named Saul, who, following an accident on a certain road to Damascus, took the name Paul to preach to gentiles and make amends for his past trespasses. Only for Jimmy this hoped-for reformation, championing the poor and disenfranchised, ends up going in the other direction, protecting the interests of murderers.

Yet as with Saul, Jimmy’s shortsightedness and impulsiveness – often flouting a more sagacious counsel – is the start of his undoing. In the end, he will be boxed in by the persona he constructed, unable to start again. Failing to measure up to the name McGill, he will likewise fail his own assignment.

At his lunch with Howard, Jimmy concludes his new name’s raison d’etre.“He’s a righter of wrongs, he’s a friend to the friendless,” he says. “That’s Saul Goodman.”

“Maybe he could, but Saul Goodman is,” Jimmy insists.

But Saul Goodman was always a cynical persona, right down to his incidentally Jewish name. He was designed to bilk petty criminals who bought burner phones and, when he hung a legal shingle, put himself on his clients’ speed dial. Jimmy considered a discount for non-felony offenses. Goodman’s entire shtick is patronizing, relying on repeat offenders. There’s no mistaking that Saul is on the make where Jimmy, however shyster-y he was, took down a retirement home that took advantage of its residents.

Whether he knows it or not, Jimmy isn’t disposing of a tainted name, but exorcizing a supposedly virtuous one he never felt at home in. Murdering the misfit McGill in him, he’s destroying his own good name.

Buried amid that self-destruction, this new name also carries a tacit wish. Saul in Hebrew means “asked for.” Put together with the name Goodman, it tells us what people want from Jimmy and what he hopes for himself.