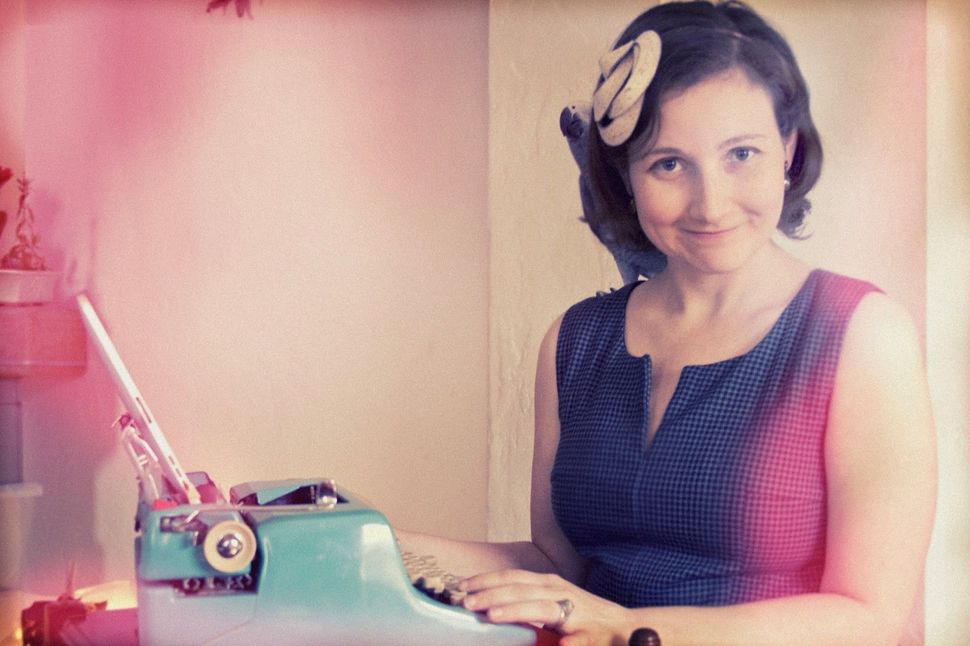 It all started with my grandfather, Sidney Goldstein, and his Korean War memoir. I found it several years ago while helping clean out my grandparents’ garage. I was 26 when I read it for the first time, and he was 27 when he wrote the letters his memoir was based on.

I knew he’d written a book, but I didn’t expected to be that interested in it. It was about a war I knew little about, and people around my age generally have another 20 or 30 years to go until they develop an interest in their family history.

But my grandfather’s memoir was more about his life than it was about the war. It was about missing my grandmother, being away from home and out of the country, and the people he served with. I found myself identifying with him and the way he looked at life. Because of this memoir I got to know him as a young man, something most people never have the chance to do.

My interest with family history only grew from there. I transitioned from journalism to ghostwriting/personal history, so I could help other people save their family histories. I tracked down the descendants of the relatives my grandparents used to correspond with. I learned I had family all over the U.S. Some lived only 20 miles away from me.

Last year I discovered another way to explore my family’s history. I was given a picture of my great-grandmother, Fannie, my grandfather Sidney’s mother. It was a large, beautiful photo that I’d never seen before. We don’t have many pictures of her as a young woman and this one really shows her character. Her eyes are warm and knowing, a small smile lighting up her face.

Her image felt just as familiar as my grandfather’s writing voice had. I took the picture with me to the mirror to confirm, rearranging my expression to match hers. The resemblance was obvious.

I never thought I looked like my great-grandmother before. In general, I hadn’t really thought about family resemblance beyond my parents (who I resemble both physically and personality-wise). Suddenly I wanted to know if I looked like anyone else.

I went through morefamily photos — pictures that I’d seen many times throughout the years looked new again. Once again, the similarities stood out: a shared smile here, an inherited nose there.

I wondered just how close I could get to resembling them. I’d definitely need makeup, hair, costume and photography help. The idea for a photo shoot began to form.

I picked out eight photos of my relatives — both women and men — and in November 2014 filmmaker/photographer , graphic designer Tara Nitz, costume designer/makeup artist Kathryn Wilson, hairdresser Tammy Rupe, and I gathered to recreate them.

It was a pretty amazing experience. Seeing myself in the mirror was surreal. Sometimes I felt like my relatives’ eyes were looking back at me. I looked so much like one or two of my relatives that I couldn’t believe I’d never noticed it before.

As the makeup, hair and clothes transformed me into various members of my family, I began to imagine what it would have been like to live their lives. To be born when they were, to have their family lives, jobs, and personalities. Each of them a little part of me, each of their lives a life I could have led.

I came away from the project feeling like I knew my relatives better, but also wishing for more information. I wish I had asked my grandparents more about their childhoods and parents’ lives. I wish I didn’t have to rely on vague memories and genealogy records to get a fuller look at their history. But that just makes me more determined to record my parents’, aunts’ and uncles’ stories. And to save my own.

I hope this project gets people thinking about their own family histories. I hope it encourages them to look at old family pictures and ask questions. Because when we learn more about our families, we’re not just learning about them, we’re also learning about ourselves. 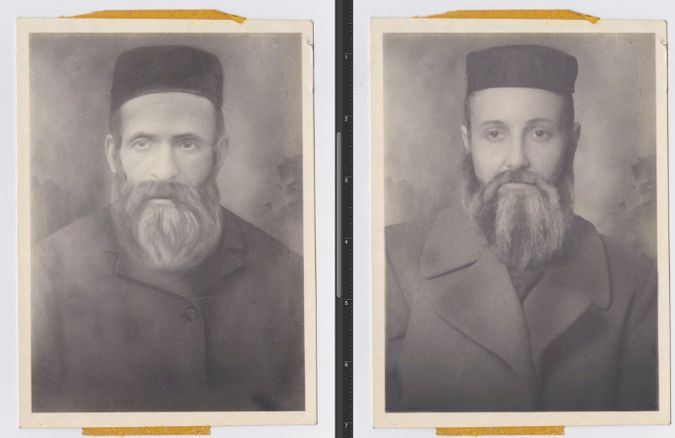 I was worried that a fake beard would look cheesy, but Katie Wilson, my costume designer/makeup artist friend, did a great job of styling it. I posed with a blank expression to match my great-great grandfather’s weary, tired look. I thought there would be some family resemblance, but didn’t realize how good the pictures were until I saw them.

My great-great grandfather had a hard life, working a variety of jobs with long hours, and was often ill. This probably contributed to his early death at the age of 53.

By the time he died, his daughter Eva had already emigrated from Poland to the United States for both job opportunities and safety reasons (there were massive Jewish migrations to the U.S. around the early 1900s). Shmeryahu’s death and the resulting loss of income probably gave the rest of the family another incentive to get out of Poland.

Which was good news for me because, with World War II and the Holocaust only about 30 years away, I might not even have existed.

Great-grandmother Fannie, sometime between 1910 and 1915 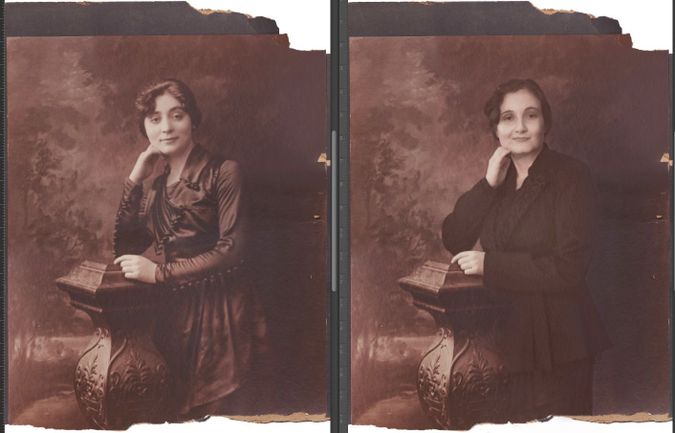 I love how amused Fannie looks in this picture, like she’s trying to suppress a laugh. Maybe the camera guy had just told her not to move a muscle and then had tripped or dropped something. Maybe he was flirting with her. To get the same look on my face, I imagined both scenarios.

Fannie dealt with a lot of misfortune in her life. She lost her father at a young age and had to deal with anti-Semitism in Poland before immigrating to New York. Her husband died of a heart attack in his 40s and she was left to raise their three kids on her own. Her experiences made her determined, strong, and anxious. She was constantly preparing herself for worst case scenarios. It was just part of the way she survived.

Her behavior rubbed off on my grandfather, who married a fellow worrywart, and produced worrywart children. I’m just the latest in a long line of worriers — the difference is that my relatives worried about real threats like anti-Semitism or poverty, whereas I worry when someone is running late. (“What if they’re lying dead in a ditch somewhere?”) 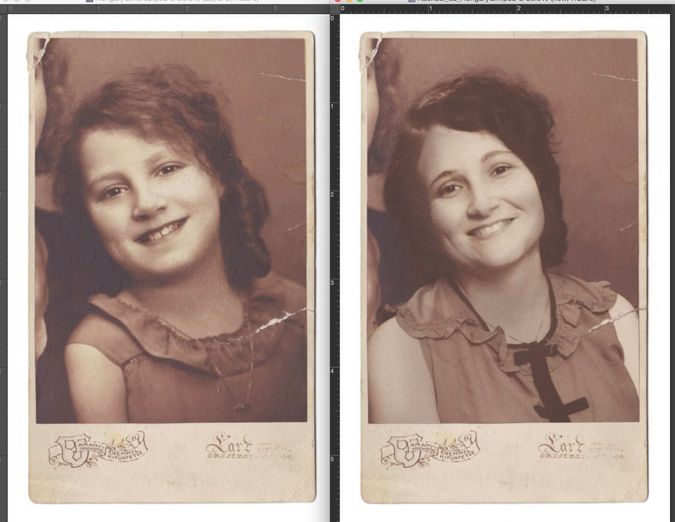 The makeup was kept light and natural to match Ibolia’s 10-year-old makeup-free face.

Apparently I’m not very good at determining who I look like. I thought Ibolia and I had similar noses but definitely wasn’t expecting to look like her doppelgänger.

Ibolia was my grandmother Ruthie’s first cousin and one of the many people who died in a concentration camp during the Holocaust.

Knowing how little separated my grandmother from the same fate, and seeing myself look so much like Ibolia, I can’t help but imagine myself in her place. 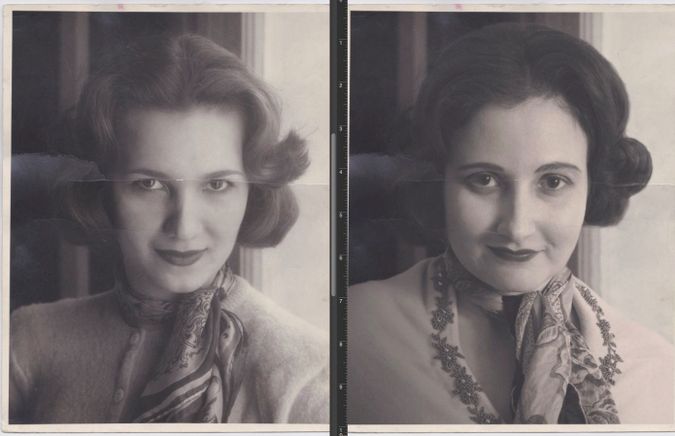 Thelma was another one of my grandmother’s first cousins. Though my grandmother knew Thelma, I know almost as little about her as I do about Ibolia because she didn’t tell me much about her cousin. Unfortunately, Thelma is probably only one or two generations from becoming one of those mysterious people no one knows in old family photos.

My grandfather was on his way back home from Korea in this picture. Preparation was simple. I only needed a jacket, hat, light makeup, and a smile to turn into my grandfather.

My grandfather was an internist, psychiatrist, writer and voracious reader. He wrote an unpublished (though it wasn’t for lack of trying) memoir about his time in the Korean War and kept a journal. He was a quiet man with a good sense of humor who almost exclusively took care of my grandmother after she developed multiple sclerosis. 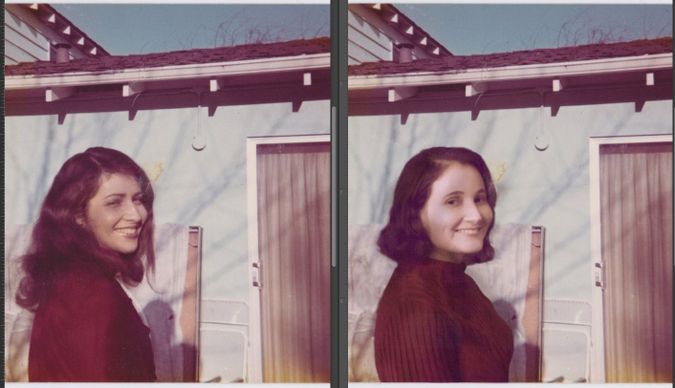 I look the most like myself in this picture. Hair and makeup were kept natural looking with highlighted eyes, cheeks and lips.

My mom helped me with my homework, drove me to school, and was always there for me and my brother. She made me feel safe and loved, and taught me how to be a caring, empathetic person. She passed away in 2013, but she’s still the first person I think of to call when I have news or need advice. 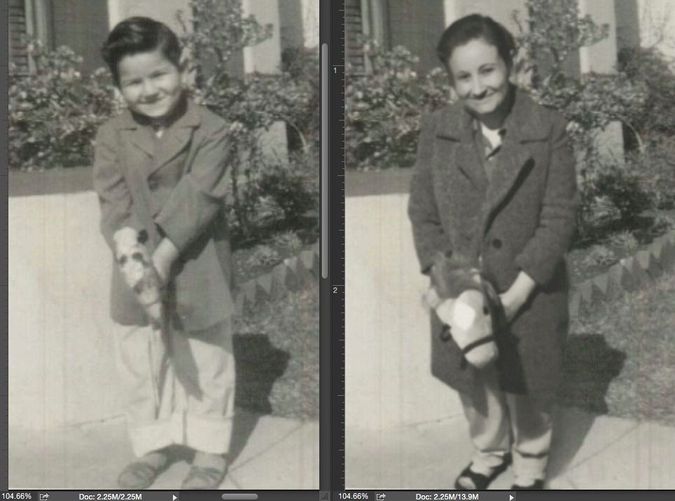 Hair was pinned back and bangs were styled into 1950s greasy boy hair. Light makeup. I bought the horse specifically for the photo shoot.

My dad Steve is a runner, vegetarian, devoted family man and retired engineer. He has a good sense of humor and likes science fiction. He was 5 in this picture. 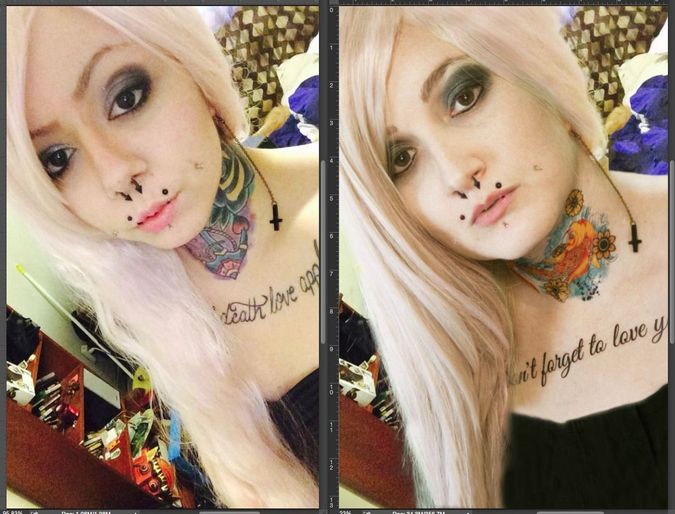 This look was the most fun for me. It required that I purchase a wig and wear a lot of makeup. I also bought two fake tattoos. Piercings were Photoshopped on (my dedication to the project only goes so far).

Tiffany is from a side of the family that I’m just getting to know. I haven’t actually met her in person yet because she lives in Michigan and I live in California, but we’ve talked. I felt comfortable with her and her dad Alex almost right away. They remind me of my brother and dad. She’s about 10 years younger than me, enjoys anime and cosplay, and is an overall fun, open person.

_ is a filmmaker, editor, sound recordist, and camera operator. She was the photographer._

Tara Nitz is a graphic designer and prop maker with production experience. She helped Angela with the lighting and was our Photoshop guru.

Katie Wilson is a costume designer and makeup artist. She located and rented appropriate costumes and did makeup.

Tammy Rupe is a hairdresser, nail and makeup artist.

Rachael Rifkin is a ghost writer/personal historian. She was the subject of the photos.