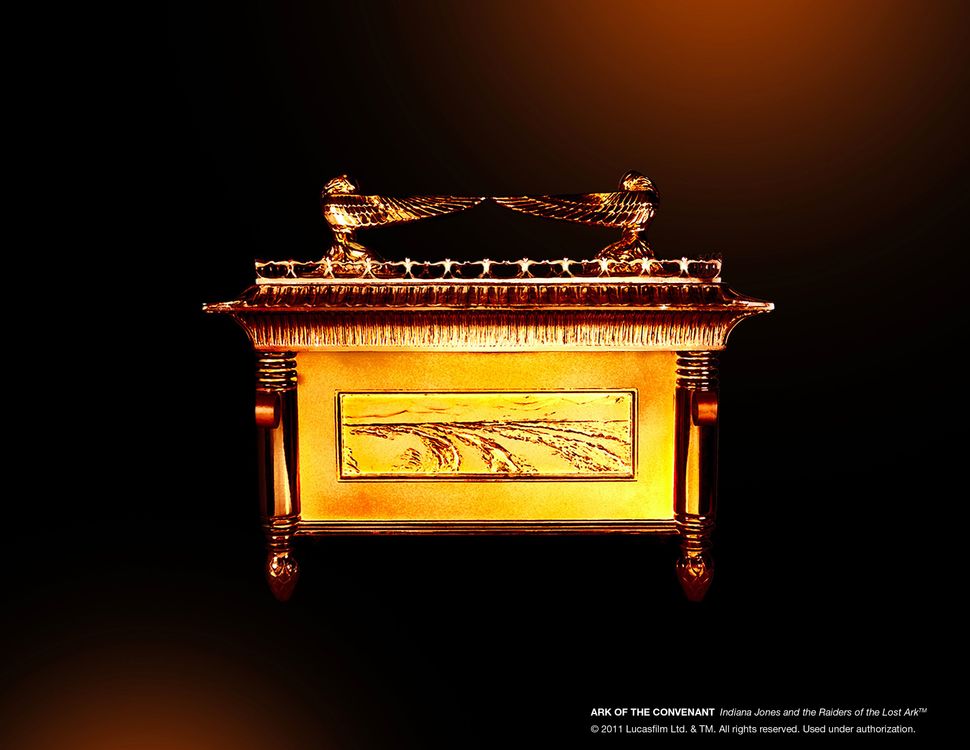 Image by Courtesy of National Geographic

Museums don’t typically take public, unequivocal stands on the question of the literal truth of the bible. But a National Geographic announcement of its exhibit “Indiana Jones and the Adventure of Archaeology” (on display through Jan. 3, 2016) refers to both the Ark of the Covenant and the Holy Grail as “famous, fictional relics.”

But theological seminary scholars are hardly the only experts to believe the ark existed. Baruch Halpern, a University of Georgia Jewish studies professor, has said that the ark seems to have been “a real article,” and in an interview, Hershel Shanks, editor of Biblical Archaeology Review, says, “There was certainly an ark in Solomon’s Temple. What was in it is another question.”

Whatever the ark’s status, the prop is at the center of a “Raiders of the Lost Ark” scene which illustrates the series’ prioritization of caricature over archeology. Indy nemesis René Belloq (Paul Freeman) dons high priestly attire and opens the ark while reciting an Aramaic prayer from the “Zohar,” seemingly unconcerned with the anachronism that seven centuries separate the ark’s disappearance after the Temple was sacked from the prayer’s composition. And ironically, the phrase Belloq stumbles through mispronouncing, as dozens of Nazis look on, makes an anti-Christian reference to the lack of Jewish reliance on any “son of God.”

Suspense mounts as Indy (Harrison Ford) and Marion Ravenwood (Karen Allen), tied to a post, avert their gaze from the spirits, which emerge from the sand-filled, gilded Pandora’s box. The beautiful ghosts quickly turn ghoulish, burning the Nazis, visiting particular wrath on the main villains’ heads: one shrivels, another melts, and Belloq’s explodes. The ark, ultimately, is bound for an anonymous crate in a vast federal warehouse.

Apparently now declassified, it has taken a crosstown trip to the National Geographic Society, where the ark prop, as well as the high priestly attire, are on view along with 100 film objects from producer-director George Lucas’s collection, plus a similar number of artifacts from the University of Pennsylvania Museum of Archaeology and Anthropology. 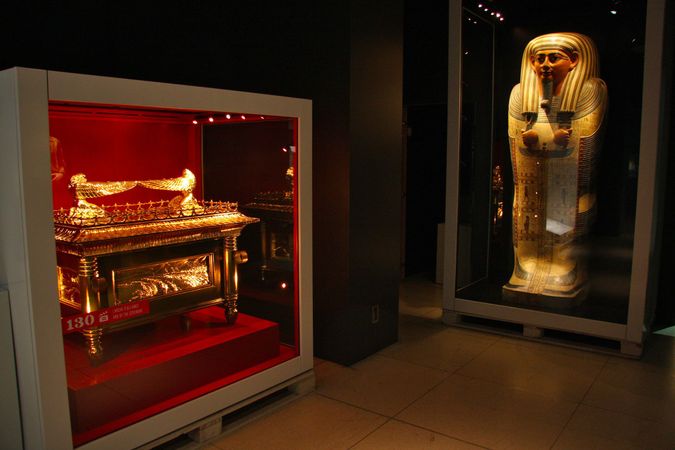 The exhibit, says archaeologist and National Geographic fellow Fred Hiebert, was originally George Lucas’s idea; Lucas, Hiebert says, is “very education oriented” and was inspired by archeology when he created the Indiana Jones brand. “I’d say about 20 seconds into the phone call I said, ‘We’re doing this,’” Hiebert says.

Once the Penn archeology chair, Hiebert convinced former colleagues to lend artifacts for the exhibit: Queen Puabi’s necklace and drinking vessel from the biblical city of Ur, a biblical-era cuneiform text (“the world’s oldest map”) from the site of Nippur, and a 7,000-year-old piece of pottery, which Hiebert, says, “probably wins the ugly artifact of the exhibit.” The latter includes residue that an organic chemist has identified as the oldest wine on record.

Standing in front of the ark prop and the high priestly costume, Hiebert stresses that Lucas injected a great deal of humor into the films, much more so than, say, Mel Gibson sought when he was making his film “Passion of the Christ.”

“Certainly in real archeology, I don’t think there are a lot of people out searching for the Ark of Covenant,” Hiebert says as he stands beside the prop painted gold with cherubs on the top. “Now when people talk about the Ark of the Covenant, this particular piece is what their minds imagine. This has become the archetypical ark.” (And new myths emerge; Lucas reportedly stored a manuscript in the prop, which the film crew feared opening following filming. “We are forbidden from opening the top of this even when it’s in the exhibition,” Hiebert says.)

The high priest’s costume, with staff, breastplate (with precious stones) and headdress, are based on real artifacts, but from a variety of traditions. “There are inscriptions that don’t mean anything,” he adds.

In fact, the Hebraic-styled letters, which biblically would have spelled “Holy unto God,” aren’t entirely gibberish.

“Believe it or not, I never saw the film,” says Lawrence Schiffman, professor of Hebrew and Judaic studies at New York University, of “Raiders of the Lost Ark,” but after receiving an image of the inscription, he says, “This is not really the old script. It’s some kind of semi-adaptation to sort of seem like the old script.”

The deltas which depict the Hebrew daled ought to be rotated; the shin should have a longer tail, and a lamed is backward, he says. “It’s an artistic way of handing it,” though “not that far off.” Schiffman theorizes that prop designers, out of respect, avoided writing the divine name in full, although they apparently weren’t aware of the rabbinic tradition that the inscription would have appeared on two lines, with “Holy” written beneath “unto God.” And, he adds, the ark would not have had the sort of landscapes depicted on it which appear on the prop. 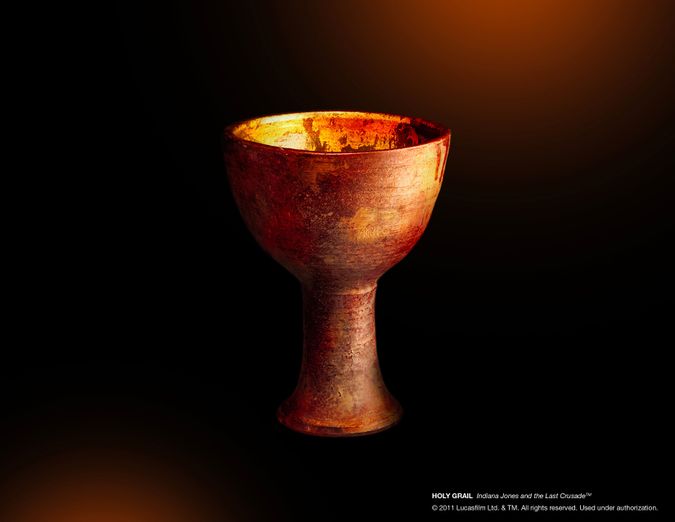 Image by Courtesy of National Geographic

Carol Meyers, an archeologist who has taught at Duke University since 1977 and who discovered a third-century ark in Nabratein in Upper Galilee in 1981 (which a New York Times article at the time connected to “Raiders of the Lost Ark”), sees things quite differently.

In the ancient Near East, notably Egypt, there were portable chests which were carried on poles (as the bible purports the ark was), according to Meyers. “The author, or authors, of the biblical tradition would be drawing on information about existing appurtenances,” she says.

Asked how she would construct an ark prop, Meyers says, “I wouldn’t offer advice on reconstructions of biblical objects. I’m not in favor of making reconstructions, for they imply reality.” When pressed and asked what she’d have said if the “Raiders” crew had consulted her, she adds, “What do you want from me? Enough already. A fictional movie can do whatever it wants.”

Most archeologists, she says, are amused by “Indiana Jones” and about the “misimpression he gives that archaeology is sort of treasure hunting.” And the field doesn’t need Indy’s help generating interest. “People don’t understand that we seek to find any materials, no matter how mundane, that will help us better understand the past,” she says. “For us, a few broken potsherds can be more important than a cache of gold.”

Hiebert, the National Geographic fellow, disagrees. The first introduction to archeology class he taught at Penn attracted 100 students, and when he asked who had come because of “Indiana Jones,” every hand shot up. “There’s a whole generation of archeologists who owe their careers to Indiana Jones,” he says. “We real archeologists have the same sort of challenges that Indy did with snakes and travels,” although, he notes, ISIS has replaced the Nazis. “The only real difference is that Indy never really has to write a report or raise money, which is what I spend most of my time doing.”

And, of course, there’s the matter of whom Indiana Jones is based upon, which Hiebert asked George Lucas. “He refuses to answer. He just laughs at stuff like that,” says Hiebert, who noticed many books on Machu Picchu in Lucas’ library. National Geographic’s first archeologist Hiram Bingham, who explored Machu Picchu, is Hiebert’s candidate for Indy. “The only thing he doesn’t have is a whip,” he says.

Menachem Wecker reports on art for the Washington Post, Smithsonian magazine, and others. He is co-author of “Consider No Evil: Two Faith Traditions and the Problem of Academic Freedom in Religious Higher Education” (Cascade Books, 2014).