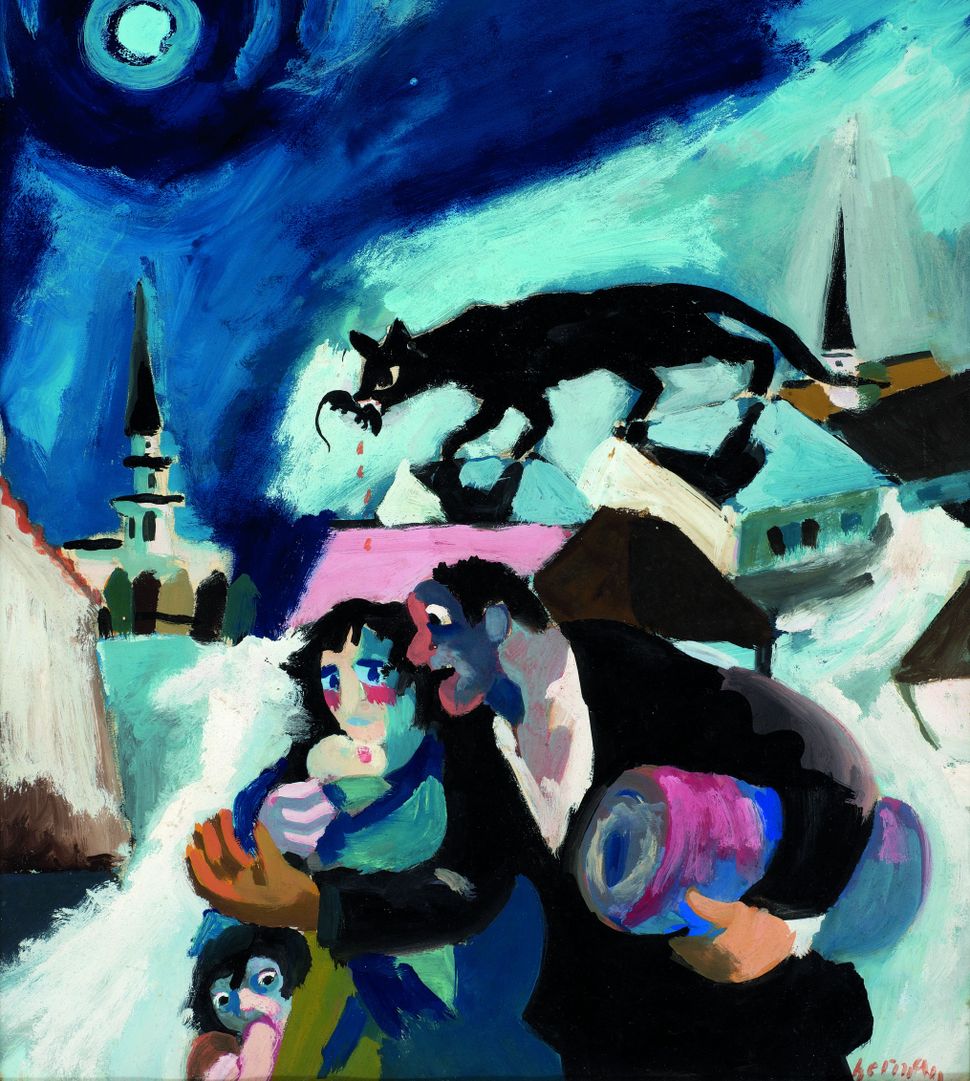 One hundred years ago, on July 1, 1915, a Jewish decorative art association called Ben Ouri was founded in the heart of London’s East End. It was led by Lazar Berson, a charismatic Russian Jewish émigré artist whose vision was to create a Jewish arts society that would support Yiddish-speaking Jewish immigrant artists and craftsmen, as well as provide a forum to show their work.

Berson was politically aware and engaged, which conflicted with the founding members’ view that the institution should be nonpolitical and focused on only creativity and art. A year later, following a dispute about his political activism, Berson suddenly left London. But the Ben Uri Gallery, as it later became known, survived to become the oldest Jewish cultural organization in the United Kingdom, with a prolific art collection of some 1,300 works.

To celebrate the Ben Uri’s centenary, an exhibition titled “Out of Chaos” explores 100 years of Jewish history and experience. This fascinating exhibition of 67 pieces, drawn mainly from the gallery’s own collection, ranges from late 19th-century paintings to 21st-century new media, and showcases masterworks by Frank Auerbach, David Bomberg, Jacob Epstein and Max Liebermann. Recent acquisitions such as “La Soubrette” (1933) by Chaim Soutine; “The Interrogation” (1938), a watercolor reflecting Nazi brutality by satirical artist George Grosz, and Chagall’s rare and rediscovered response to the Holocaust, “Apocalypse en Lilas, Capriccio” (1945), are also on display. Due to the North London gallery’s space constraints, many of these artworks usually live in storage. The exhibition is therefore a unique opportunity to see so many of these impressive pieces on display together.

This is the art of migration and identity, and the show’s title describes the trauma involved in forced journeys of migration, writes David Glasser, chairman and chief executive of the gallery, in the accompanying exhibition publication. Victor Hageman’s haunting “The Emigrants” (circa 1910), which depicts three generations of one family gathered together at the point of exile, encapsulates this: The figures’ emotive facial expressions carry a sense of timelessness about them.

The exhibition’s chronological order follows key aspects of the British Jewish story, beginning with East End ghetto life. Paintings by immigrants who had fled the pogroms of Eastern Europe, such as the Warsaw-born Alfred Wolmark’s “Shabbat Afternoon” (circa 1909–10), contrast with the work of Solomon Alexander Hart, whose portrait of Queen Victoria (1842) illustrates his integration into British social and artistic life. Hart became the first Jewish member of the prestigious Royal Academy in 1840.

A room dedicated to the period from 1933 to 1945 is appropriately titled “Forced Journeys.” Leo Haas records the dark days of Nazi persecution in “Terezin-Theresienstadt (Children on the way to Auschwitz),” while the childlike, naive quality of “Shtetl” by Chana Kowalska, who died in Auschwitz, conjures up past memories.

There is a room full of masterpieces by the Whitechapel Boys, a group of young Jewish artists from immigrant backgrounds who emerged from the East End to become outstanding proponents of British modernism. Works by Bomberg and by Jacob Kramer are extraordinary, but Mark Gertler’s “Merry-Go-Round,” his sensational anti-World War I painting, forms the centerpiece. 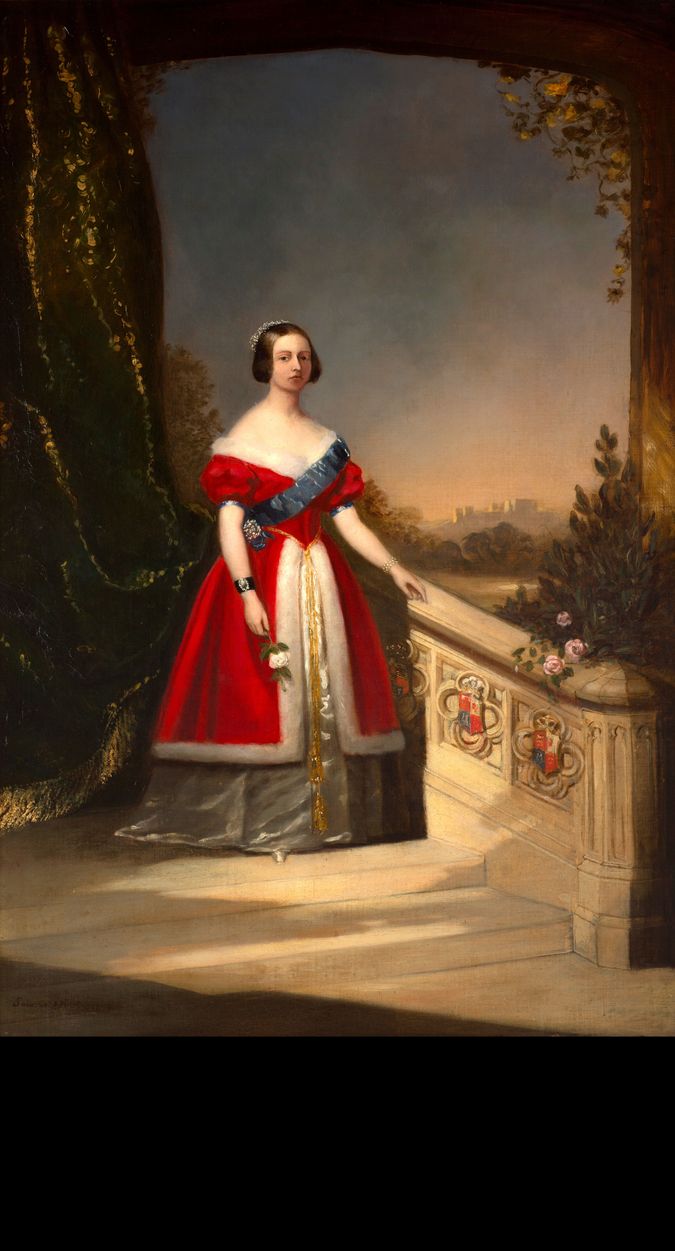 Can the works in “Out of Chaos” be defined as Jewish art? Not all the pieces here reflect the Jewish experience, and not all are by Jews. This question of Jewish art is one that has plagued the Ben Uri since its inception, co-curator Rachel Dickson says. The response is individual to each artist, she explains. It depends on how they identify with their Jewishness, whether religious (Ludwig Meidner), secular (Auerbach) or contemporary Israeli (Natan Dvir). At the end of his life, R.B. Kitaj — an American artist who spent most of his career in England — was assimilated but immersed in Jewish tradition without being religious.

Dickson points out that the founding artist, Lazar Berson, is the one exhibited artist who deliberately set out to create a specific Jewish form of art. He combined his Russian Jewish heritage with folk art, and his 1916 seminal, circular design piece is on display at the start of the exhibition. It intertwines symbols of the 12 tribes of Israel with decorative motifs, and includes vignettes of Yiddish texts that comment on the successes of the Ben Uri’s first year.

The Ben Uri describes itself as the only specialist art museum in Europe that addresses issues of identity and migration. In taking it forward and ensuring that it maintains its relevance, the gallery has begun to embrace new media forms, including film, installation art and video. Glasser is also keen to continue the gallery’s work of reaching out to a wide-ranging audience by telling the stories of other minority communities via themed contemporary shows.

Glasser refers to the Ben Uri as “a jewel in London’s rich cultural crown.” “Out of Chaos” is a resplendent display of artistic treasures and is a strong argument in support of Glasser’s desire for the Ben Uri to acquire permanent, spacious, central London premises to secure its next centenary. If ever the time were right, it must be now.

Anne Joseph is a freelance critic based in the UK.