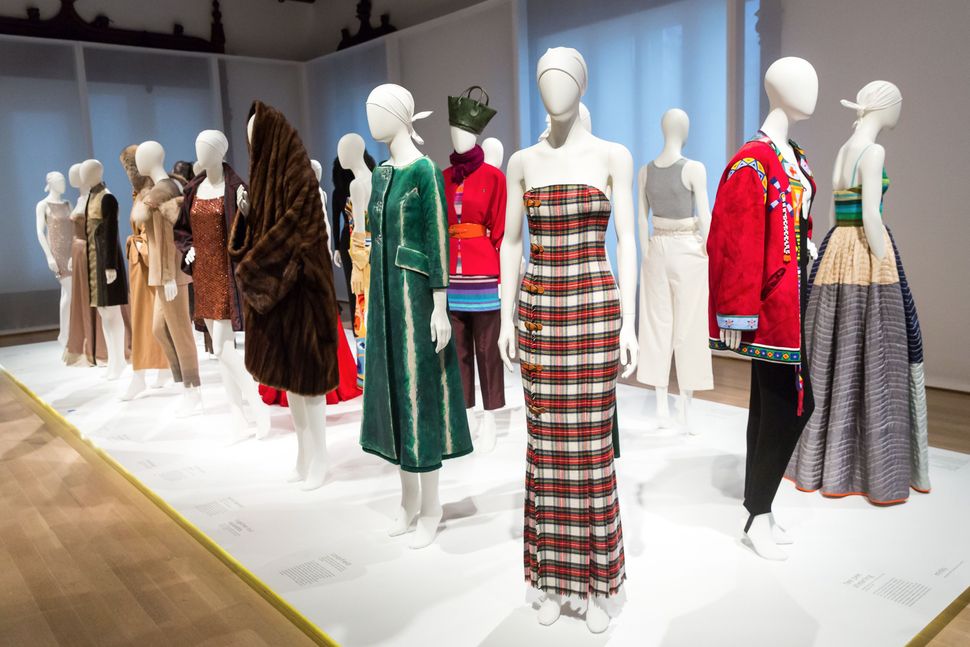 Many years ago, my colleague Maurice Berger and I proposed an exhibition on fashion and the Jews to the powers-that-be at the Jewish Museum. Nothing came of it, save countless meetings and drafts and redrafts of our proposal. The project was shelved.

I was delighted, then, to learn of “Isaac Mizrahi: An Unruly History,” an exhibition that is about the designer and is currently at the Jewish Museum through August. I looked forward to it with keen anticipation.

My expectations were rewarded, at least at first. The exhibition is as affable and pleasing as its subject, and deserves the many accolades that have come its way. Awash in color, it’s spirited and great fun: a romp through recent fashion history. A constellation of mannequins sports Mizrahi’s creations, from casual attire to fancy dress, while a beautifully designed video installation, whose images are culled from television, film and the runway, make clear how Mizrahi came to be a “New York institution.”

Giving pride of place to fabric swatches, sketches and storyboards, “Isaac Mizrahi: An Unruly History” is also a study of process, illumining how the designer got from here to there, from conceit to product.

But — and it’s a big one — instead of being buoyed by what I had just seen, I left the exhibition with a hollow feeling. For all its manifest exuberance, something was not quite right. The proportions were off.

The show, which leisurely wends its way over the entire second floor of the Jewish Museum, contains only three references to Jewishness — four, if you count the designer’s distinctive name. One reference takes the form of a belt buckle in the shape of a Magen David, a Star of David. Another, in the gallery guide, refers elliptically to Mizrahi’s “upbringing.” And the third, in an introductory text panel, notes that he attended the Yeshivah of Flatbush for elementary school.

If you already knew about the existence of the Yeshivah of Flatbush, a Jewish day school in Brooklyn where the student body is drawn heavily from the local Syrian Jewish community, this reference reads as a nod in the direction of Mizrahi’s background. If you didn’t have a clue, and I suspect many visitors don’t, it reads more as an exotic flourish. Either way, it’s curious. How many cultural personalities make a point of highlighting grades one through six on their résumés?!

That “Nanook of the North,” a celebrated silent film about life in the “actual Arctic,” had a greater impact on Mizrahi’s sense of self, his aesthetic and his creative process than Nachmanides (who?) is fine by me. I’m not the least bit interested in essentializing his — or anyone else’s — Jewishness. But surely a little more detail about the designer’s “upbringing,” the singular Syrian Jewish culture from which he comes, the garment industry in which he works, or the relationship among Jewishness, sexuality and high camp that stamps his personality would not be misplaced. In fact, I would imagine that the Jewish Museum’s visitors might even welcome that kind of elaboration.

And yet, the ways in which this exhibition unfurls make it seem as if sustained attentiveness to Jewishness might either blunt or blemish its integrity. In an age of transparency, let alone in an exhibition about process, the Jewish Museum could do better. Meanwhile, outside its precincts, explicit discussions of the relationship between Mizrahi and his Jewish background bubble to the surface. The New Yorker, for example, quotes Mizrahi as saying: “I’m Jewish. I get an exhibit at the Jewish Museum.” He tells Victoria Stapley-Brown, an interviewer from The Art Newspaper, “I kind of understand there’s a kind of inseparable ‘Jew-iness’ about me and about New York Fashion in general. It belongs in this museum.” That observations like these are conspicuously absent from the Jewish Museum’s presentation renders it all the more suspect — and troubling.

What a missed opportunity. After all, in life, as in fashion, it’s the detailing that counts.