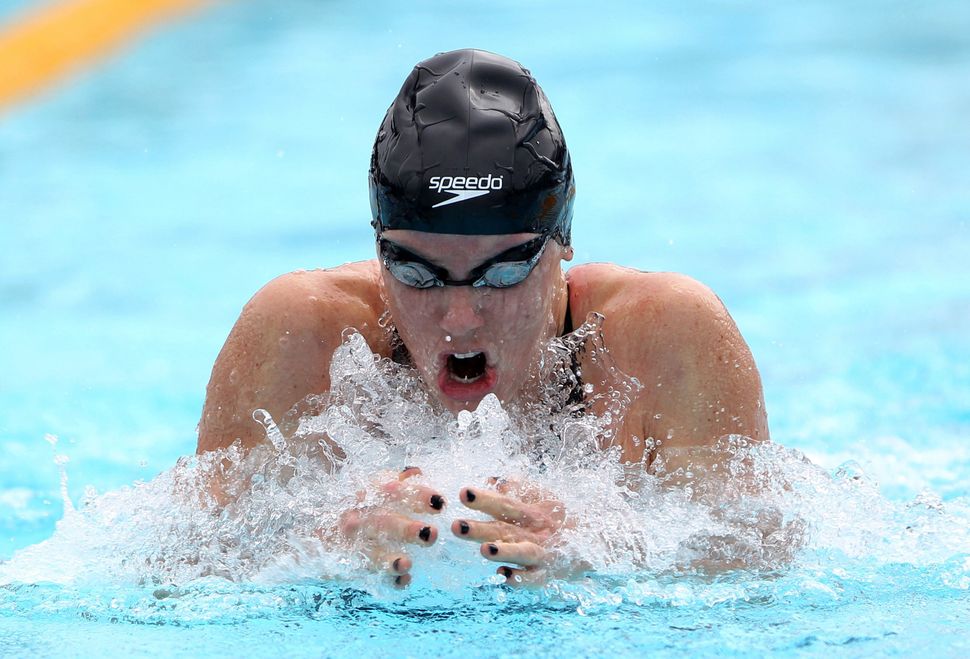 The 1936 Berlin Olympics showcased the Nazi love of spectacle and buttressed the regime’s international legitimacy. To avert boycott threats, the government temporarily muted overt manifestations of its anti-Semitic policies, removing discriminatory signage and toning down newspaper rhetoric. But it still barred most athletes of Jewish origins from its national team — and demanded that winners offer the Hitler salute.

Among those affected by the ban was the champion high jumper Gretel Bergmann, who recently died at the age of 103. In a cruel tease, she was allowed to participate in the country’s Olympic trials, where she set a German women’s record of 1.60 meters. But before the games, she received official notification that she was not good enough to compete. “It was all a lie, of course,” she later said.

Bergmann, who would settle in New York and take the name Margaret Lambert, affixed a newspaper account of her record-setting jump to the rejection letter, as though in refutation. And both that document and her poignant taped recollections of the snub, recorded in 1995, are featured in a provocative exhibition on Jews, Germany and sports at the Munich Jewish Museum.

“Never Walk Alone: Jewish Identities in Sport” examines the relationship between cultural attitudes and Jewish athleticism in Germany from the 19th century to the present. (The title is mystifying unless you know that some soccer fans have adopted “You’ll Never Walk Alone,” from Rodgers & Hammerstein’s musical “Carousel,” as an anthem.)

The show’s first gallery concentrates on individual athletes, while a second one looks at everything from rabbinical attitudes toward sport to Jewish fandom and a planned Munich memorial to the 11 Israeli athletes (and German policeman) murdered by Palestinian terrorists at the 1972 Olympics.

A German-language catalog, edited by lead curator Jutta Fleckenstein and co-curator Lisa-Maria Tillian-Fink, delves more deeply into the idea of sports as a route to belonging, as well as a means of female emancipation. Michael Brenner’s essay, “Sport and Pride,” touches on connections among athleticism, historical Jewish heroism and Zionism, and other essays focus on particular sports, athletes and time periods.

In defiance of stereotypes, many Jews in Germany excelled at activities such as boxing, fencing, soccer, swimming and tennis. When they could, they participated in mainstream sports clubs; when anti-Semitism intervened, they formed their own clubs, with historically resonant names such as Maccabee and Bar Kochba (after the legendary leader of an anti-Roman revolt).

Some Jewish athletes achieved national celebrity. The strongman Siegmund Breitbart (1893–1925), photographed bending an iron rod, considered himself an embodiment of “muscular Judaism.” The exploits of the great fencer and 1928 Olympic gold medalist Helene Mayer were advertised on posters and commemorated with souvenir statuettes. Mayer, who had a Jewish father but did not identify as Jewish, was permitted to compete in the 1936 games. When she received her silver medal, she controversially gave the Nazi salute — a defining moment captured on film.

The Holocaust swept up even the most famous Jewish athletes. Alfred Flatow, who won three gymnastic gold medals for Germany in 1896 in Athens, at the first Olympic Games, was murdered at Theresienstadt in 1942. The exhibition does not specify how.

On the other hand, Emil Farkas’s athleticism probably enabled him to survive the infamous “shoe runs” at Sachsenhausen, in which prisoners were forced to walk dozens of kilometers a day, often with heavy loads, to test the durability of new shoes. (The ordeal killed many weaker inmates.) At Auschwitz/Jaworzno, Hertzko Haft was forced to box for the entertainment of camp guards. He, too, survived.

In Israel, Emanuel Schafer managed the national soccer team, applying principles learned in Germany. The Polish-born Natan Grossman discovered a passion for basketball at an Israeli kibbutz, and brought it back to Munich. Bruno Roth, a mountaineer, took along his studded leather mountain boots when he immigrated in 1939 to the United States — they’re in the show — but he never used them again. Even so, he never stopped missing his “beloved Bavarian mountains.”

And then there is the new generation, Jewish athletes who have made a more welcoming and inclusive Germany their home. In 2004, the breaststroker Sarah Poewe (represented by her swim cap, featuring the national flag) became the first German of Jewish background since 1936 to win an Olympic medal for Germany.

The second-floor exhibition gallery concentrates on stories like these, putting them in historical context. Floor markings and zigzag rows of white tubes punctuated by cutouts of figures in a variety of athletic postures are meant to suggest the game of table soccer. Visitors must traverse the gallery to get to the exhibition start. Only then do the tubes become legible as vitrines, displaying letters, photo albums, scrapbooks and sports diaries, trophies and medals, advertising posters and souvenirs, sports equipment and (best of all) vintage audio and film clips.

The labels are economical and to the point, though the English translations are sometimes infelicitous. Metaphorically intended subtitles — terms such as “turnover,” “scoring” and “offside trap” — are baffling and best ignored, since the gallery’s organization is fundamentally chronological.

The second gallery is something of a smorgasbord, with exhibits highlighting the composer Arnold Schoenberg’s invented tennis notation, portraits and sculptures of boxers inspired by the gallery owner (and boxing enthusiast) Alfred Flechtheim, and equipment for Arctic exploration supplied by the sports-store owner Fritz Adam. One display touches cursorily on the intersections between cultural memory and sports.

Visitors should reserve time to walk through the museum’s spare, inventive permanent exhibition, “Voices, Places, Times — Jews in Munich.” Avoiding the encyclopedic approach of many German museums, it touches on the history and rebirth of Jewish life in Munich, displays the fragmentary remnants of a largely obliterated past, and underlines the role of museums in preserving those traces.

Julia M. Klein is the Forward’s contributing book critic and a longtime museum critic whose reviews have appeared in The Wall Street Journal, The Nation, Columbia Journalism Review and other publications. Follow her on Twitter, @JuliaMKlein.