How Black Culture Taught Me What It Means To Be Jewish 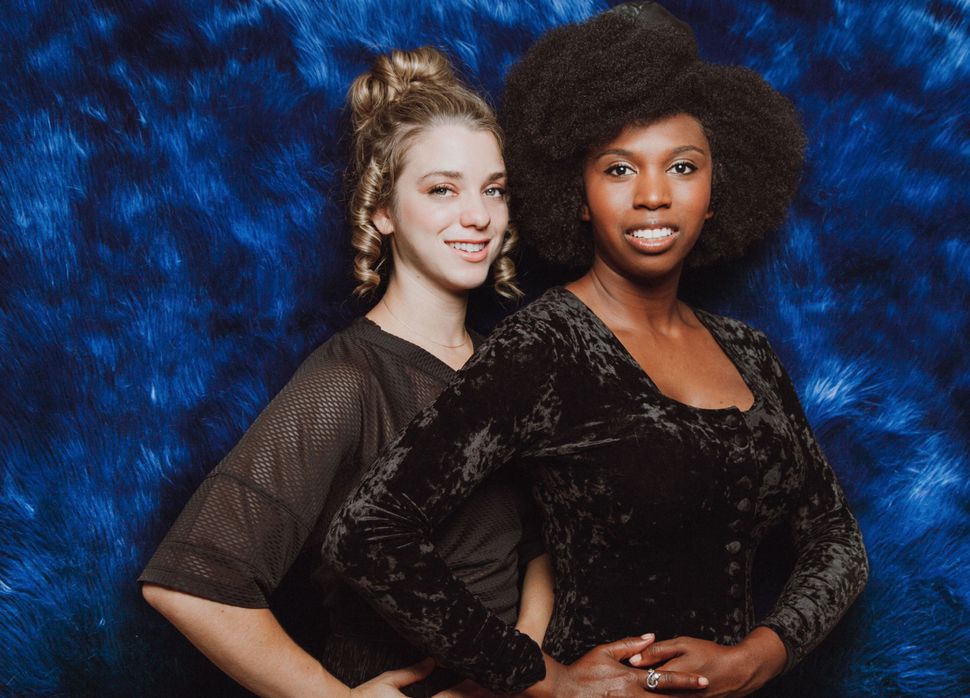 On Tuesday, September 26th — in front of my most intimate friends and a handful of random Brooklynites who thought “sure, I’ll go” — I will finally become a Bat Mitzvah girl at the age of 26. Under Littlefield Brooklyn’s brazen lights, this proud queer/power Jewess will cascade into womanhood at “Rachel and Rachel’s Queer/Black Bat Mitzvah,” a show that pays homage to my Jewish heritage the only way I’ve ever known how, with a full appreciation for black American culture.

Growing up in Chicago I was usually the only Jewish kid in predominantly black spaces, and I was heavily influenced by my peers, to say the least. Imagine eleven year old me: 4 foot 9, weighing in at over 100 pounds because kinahora “the girl could eat,” as my grandma would say, and wearing a blue jean Rocawear “fit” that I’d found in the boy’s section at Marshalls. If I was lucky, my hair was done up in an elaborate, four-day-too-old, corn-rowed updo (courtesy of my hairdresser mom) that was at this point probably frizzy and smelling like a belly button because that’s the price white girls pay for appropriating black hair styles. For young Rachel Joravsky this is what a Jewish kid looked like. And boy did I love to rep my Jews, especially when answering that uncomfortable question kids ask so often: “what are you?”

What was I? Incredibly confused about my sense of identity, for one. And problematically, still white, for two. White was the butt of almost all the jokes my friends made. White was an aggressive inability to dance on beat. White was loving Tabasco hot sauce — the red kind! Nothing seemed worse than being white. But I was, and so, black culture would never belong to me. I clung to Judaism — my ticket to otherness — which was both unequivocally mine and foreign to me despite the fact that shtetl blood coursed through my veins from both sides of my family.

It took chutzpah, flaunting my Jewish heritage the way I did, while at the same time knowing very little about the religion itself. When my friends would make fun of white people and then, remembering my presence, throw me a quick and half-hearted “no offense,” I’d shake it off. After all, I wasn’t really white, I was Jewish. This assertion was rightfully met with blank stares. Oh, if today’s gate keepers of identity politics could’ve seen me then. This young Jewish girl escaping whiteness via Jewishness and with a head full of cornrows at that! They’d likely cast me away into the pits of identity politics purgatory, which I imagine is an eternity spent in a social/cultural analysis class offered through some private university that charges $80,000 a year.

But unfortunately for young Rachel, the fact that Jews can be white and enjoy all the privileges that come along with it was not a lesson I’d learn for a few years. And so in the meantime, I’d start the clunky process of explaining to my peers how exactly being Jewish was different from being white.

My friends: “Jewish? Like the guys with the sideburns in Rogers Park.”

My friend: “But aren’t they white too?”

My friends: “Damn so does your family have a lot of money?”

Me: “Hell no, we don’t even have cable! I gotta watch “That’s So Raven” at my grandma’s house.”

At these times, when I was momentarily elevated to the Judaic level of rabbi, I began to consider exactly what it meant to be Jewish. According to my father, it meant always running a few minutes late and talking about your next meal while you are still eating the one that’s in front of you. But how much of this was actual Judaism and how much of it was the culture of my family? Was I Jewish enough? I couldn’t read Hebrew, I’d never been to Israel, and I’d spent a grand total of about four hours a year in temple during the high holidays — an experience dominated by me waiting for my mom to give me and my sister the green light to flee services during the mourner’s kaddish, and roll down the grassy hill outside the synagogue.

Yet even with my very unorthodox form of Judaism, I came to feel a distinct pride in being Jewish. While this pride came partly from watching my own family perform the at times arduous task of showing up as Jews in a gentile world every day, it was equally cultivated by the abundant black pride my friends had for their own culture. I was energized and inspired by the perseverance that pulses through Black America. I noticed it when I bumped Kanye’s “College Dropout” in my room, or studied (and attempted to master) the Harlem Shake from early Youtube videos. This perseverance can be defined as a determination to exist, and it comes from being a minority fighting for recognition in a society that doesn’t view you as the status quo. To me this is exactly that it means to be a Jew.

So as I stand on the brink of my 26th birthday where I will take to the faux bimah in a comedy show that honors both the culture I was born into and one that I have reveled in from the sidelines for my entire life, I have to give credit where credit is due and thank Black America for teaching this Jew to be a prideful one.

“Rachel and Rachel’s Queer/Black Bat Mitzvah will be performed at the Littlefield Performance + Art Space on 635 Sackett Street in Brooklyn on Tuesday, September 26 at 7:30 PM.

How Black Culture Taught Me What It Means To Be Jewish