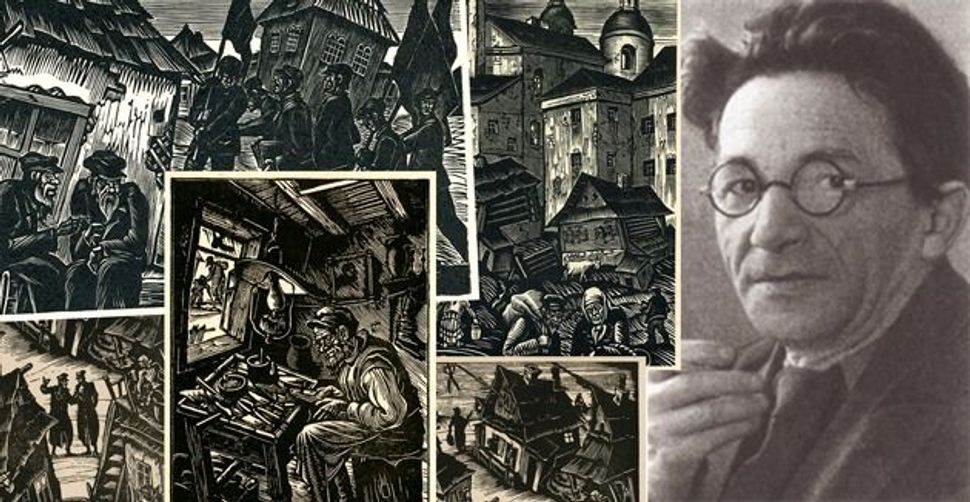 In honor of the 125th birthday of Russian-Jewish artist Solomon Yudovin, a modest yet captivating exhibit at Russia’s St. Petersburg Jewish Community Center highlights some of his best work, including historical photographs, drawings and book illustrations. Of particular interest: A number of his watercolors from the 1930s, painted in his hometown of Beshankovichy, not far from Vitebsk, the birthplace of Marc Chagall.

Beshankovichy, known as a center of Lubavitch Hasidim, was a charming Jewish shtetl until World War II; its last synagogue was closed in 1936, after the Soviet government concluded that nobody was attending it anyway. Beshankovichy became strongly secularized following the Russian Revolution. As a result, the local life that Yudovin immortalized in his works includes both traditional and the newly created Soviet Jewish culture.

Yudovin’s theatrical sketches, created for the theater studio at the Yakov Sverdlov Jewish House of Education — one of the last Jewish cultural organizations in pre-war Leningrad — form another notable series at the exhibit. In 1934 and 1936, the painter designed the sets for two classic productions: “The Recruits” by Abraham Goldfaden and “The Conscription” by Mendele Mocher Sforim.

Born in Beshankovichy in 1892, Yudovin studied at the venerable Vitebsk Art School, then helmed by Yehuda Pen, a major figure in the Jewish renaissance in Russian art. Later, Yudovin became one of the most acclaimed book illustrators and graphic artists in the country. In the deplorable conditions of the Nazi blockade, he drew images of the starving city Leningrad, now St. Petersburg, and its residents. His lithographs and postcards are among the most famous images of the city.

Ludovin passed away in Leningrad in 1954.

Although the St. Petersburg exhibition is small, its purpose is clear: To introduce the broader public to both the Jewish aspects of Yudovin’s heritage and to the history of the Soviet Jews in general. This year marks the 100th anniversary of the Russian Revolution; for better or for worse, the Revolution made a huge impact on the history of the country and of the entire world. The role of Jews in the Revolution and Jewish life in the Soviet Union remains a sensitive yet rich area of study.

A nephew of writer and ethnographer S. Ansky, Yudovin was known as a “graphic Yiddishist.” His drawings and historic artistic photographs serve as a wonderful complement to Yiddish works of literature, both poetry and prose. While accompanying Ansky on his folklore expeditions, Yudovin photographed the life of the shtetl Jews. Thanks to Yudovin, Ansky’s archives contain about 1,500 photos. A portion of them have disappeared and many others are contained in various other archives round the world; the largest collection is in St. Petersburg.

For Mizrahi Jews, this type of blending is an old art tradition. Yet Jews in the West seem to have no connection to classic East European Jewish folk art at all, instead borrowing themes and styles from their surrounding non-Jewish environment. This in itself is not a bad thing. Many old Ashkenazi illustrated manuscripts, tombstones, Torah ark curtains, sukkah decorations and other items from the Middle Ages reveal an obvious European influence — not surprising, considering that the Yiddish language stems from a Germanic group and contains large Slavic elements. Multicultural synthesis is a necessary element of every healthy and developing human culture.

The problem today, however, is that instead of creating an organic synthesis, American Jews are ignoring their East-European roots altogether when it comes to religious aesthetics. For example: Recently, a Slavic-American Jew, who lately became observant, sent me photos of his so-called Hanukkah bush. It was essentially a Christmas tree designed with blue and white plastic twigs and decorated with plastic ornaments presumably made in China. A surprising but little-known fact is that some Lubavitch and other ultra-Orthodox rabbis whose worshippers are newly religious Jews do permit these bushes, because today, especially in the former Soviet Union, they serve simply as a secular symbol of the new year. Yet, when a Jew orders special Hanukkah bushes painted in the colors of the Israeli flag, the result is both bizarre and comical.

Why don’t Jews adorn their homes with the authentic forms of Jewish folk art, like Yudovin’s masterpieces? With the aid of computer technology, it isn’t complicated to find and retouch these images in creative ways.

12 years ago, I helped publish a Yiddish-language magazine in St. Petersburg called The New Friend. We had no professional artist on staff, so we simply incorporated Yudovin’s work as illustrations. It was fitting artistically, as well as a demonstration of Jewish pride. Why do today’s Hasidim and other Jews who are otherwise eager to uphold Jewish tradition not do so when choosing their artwork? The folk images of the old-time shtetl are more meaningful than the plastic Christmas decorations that even many Christians avoid.

One reason that Hasidim don’t incorporate traditional Jewish art in their home is because it is often associated with secularism. We see the same sad tendency when it comes to klezmer music. The religious world often associates the modern klezmer music with worldliness, so instead they compose and play new Jewish songs, often under American pop music influences.

If today’s Jewish communities were to consider the authentic Jewish art traditions and the acclaimed works of artists like Yudovin, it would be a huge step forward. In the meantime, we can only hope that future exhibits in museums and community centers like the one in St. Petersburg will help educate people about their precious Jewish folk art heritage.