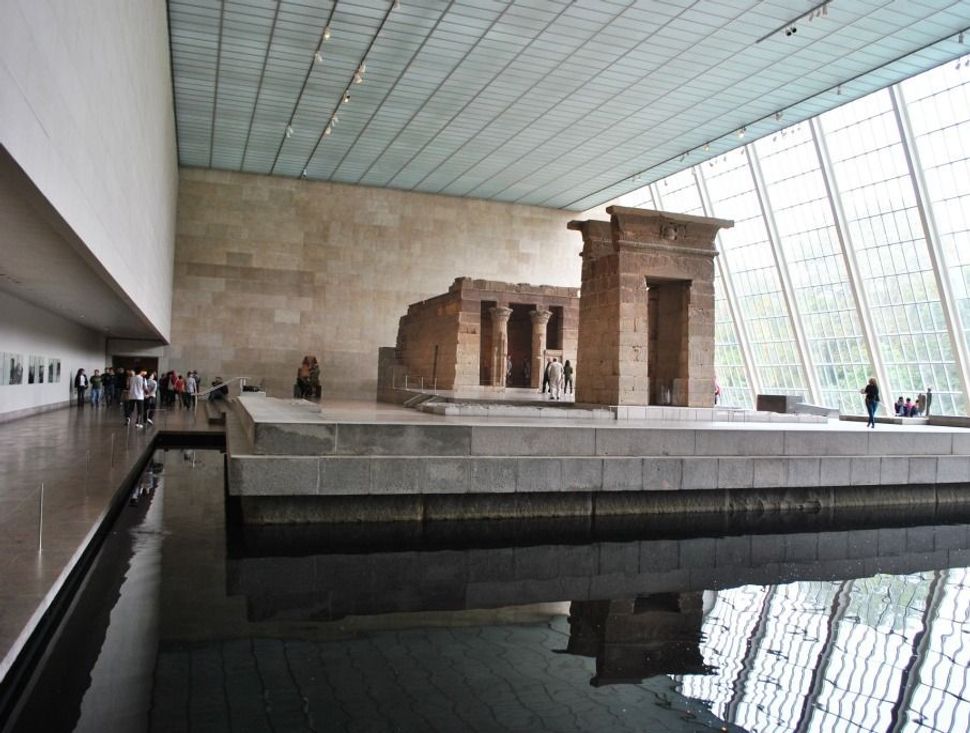 On a recent Saturday, the photographer Nan Goldin, best known for her mid-1980s photo series “The Ballad of Sexual Dependency,” led a protest at the Metropolitan Museum of Art. Standing in front of the Egyptian Temple of Dendur, the low, rectangular reflective moat that surrounds the Temple swarmed with orange pill bottles that had been thrown in by activists, Goldin spoke out against the family for whom the enormous hall in which the Temple is housed is named: The Sacklers.

It was the first large-scale public protest against the Sackler family, founders of Purdue Pharma, the company that popularized opioids in the form of the highly addictive trademark drug: OxyContin. The Sacklers who remain involved in Purdue have largely escaped criticism for the public health crisis for which that drug and its overprescription, a trend often attributed to Purdue’s aggressive marketing of OxyContin, are partially responsible.

Goldin, herself a former OxyContin addict, has made it her mission to hold the family accountable.

If Goldin succeeds, her activism will have a secondary impact with profound implications for the United States’ cultural landscape: Organizations that support the arts and scholarship will have to dramatically reconsider the way they evaluate potential funders, a moral questioning that has the potential to impact artists, audiences and institutions alike.

That’s because, as Patrick Radden Keefe wrote in an October New Yorker article, the Sacklers who are still involved in Purdue appear to have crafted their public image to revolve around their philanthropic efforts, rather than their pharmaceutical business. As Keefe wrote: “Although the Sackler name can be found on dozens of buildings, Purdue’s website scarcely mentions the family, and a list of the company’s board of directors fails to include eight family members, from three generations, who serve in that capacity.” (OxyContin was first released in 1995, at which point the company was controlled by two of its three founding brothers, who were born in Brooklyn to Jewish immigrant parents. The eldest, Arthur, passed away in 1987, after which his brothers Mortimer and Raymond bought back his shares; their descendants, unlike Arthur’s, remain influential at Purdue and have profited off of OxyContin.)

Goldin told The Times that she was prescribed OxyContin in 2014 for pain stemming from tendinitis, the beginning of a three-year-long addiction; she eventually turned to heroin, and ultimately overdosed on a mixture of heroin and fentanyl. She enrolled in an expensive treatment program in Massachusetts — “Every part of yourself is in terrible pain,” she told The New York Times, recalling the experience of withdrawal — and early in 2018, after being clean for a year, founded an activist group called P.A.I.N. Sackler. (The acronym stands for Prescription Addiction Intervention Now.)

The group’s intention, Goldin wrote in a February essay for Time, is to address the opioid crisis by taking the fight to “those who are responsible,” specifically the Sacklers. “I’ve decided to target the Sacklers through their philanthropy,” she wrote. “We intend to hold them accountable and put social and political pressure on them to respond. They caused this problem, now it’s time for them to find the solution.” In a change.org petition, Goldin added that P.A.I.N. Sackler plans to hold institutions like the Met accountable for future interactions with the Sacklers: “We intend to put pressure on museums, art spaces and educational institutions to refuse future donations from the Sacklers,” they wrote.

As of press time, neither Goldin’s representatives nor Purdue Pharma representatives had responded to requests for comment. Elizabeth A. Sackler, Arthur Sackler’s daughter, has publicly aligned herself with Goldin’s cause, telling Hyperallergic “I admire Nan Goldin’s commitment to take action and her courage to tell her story.”

In the case of the Met, Goldin’s protest — during which participants staged a die-in and chanted slogans like “Sacklers lie, thousands die” — was complicated by the fact that it took place in a venue the Sacklers donated long before OxyContin’s debut: The Sackler Wing, which opened in 1978, was the gift of all three brothers, the two who eventually profited from OxyContin and the one who never did.

The question for the Met, in that situation, isn’t about taking tainted money. It’s about assisting in the preservation of the public good-standing of a group of people — once again for good measure, not all Sacklers! — who oversaw a company as it developed and encouraged the misuse of a product that catalyzed a public health crisis estimated to have taken over 64,000 lives in 2016 alone, and continue to oversee that company as it strives to find that drug new and more vulnerable markets. Although Purdue has in recent years made some alterations to OxyContin intended to reduce its potential for abuse, in 2015, the company won FDA approval for OxyContin to be prescribed to children ages 11 to 16.

Given that, even though the Sackler Wing was a pre-OxyContin gift of the Sacklers, there’s reason to think the Met making a public statement on the family’s involvement with Purdue would be not only justifiable, but helpful. After all, Purdue’s own history shows precedent for high-ranking company officials to be held personally responsible for misdeeds related to a company product. In 2007, at the same time that Purdue pled guilty to, in the words of a New York Times report, “criminal and civil charges related to the drug’s [OxyContin’s] ‘misbranding,’” three of its executives pled guilty to the same charge. Whether or not the Sacklers should face legal action, the court of public opinion, in which they have always placed high value, has yet to take them to task.

And the Sacklers have had plenty of time to voluntarily engage in preventative and remedial actions in response to the opioid crisis; that they haven’t suggests that a strident public call for them to do so is necessary. Goldin’s group has some proposals for what productive philanthropic actions the family might take to address the harm they helped create: According to the change.org petition, which is less than 2,000 signatures short of its goal of 35,000, P.A.I.N. Sackler’s list of demands include imperatives that the Sacklers fund various opioid addiction treatment programs and facilities, establish programs that will educate vulnerable populations about the dangers of opioids, “reeducate doctors to stop over-prescribing “ OxyContin and “install public dispensers of Narcan, the medicine that reverses an overdose, on every corner in America.”

Is the Met, which benefited from the Sacklers’ generosity decades before OxyContin entered the market, obliged to participate in the public accounting that could help persuade the Sacklers to meet those demands? Treating artists and artistic institutions as responsible for the ethical murkiness of the funds that facilitate their work is often effective only as a form of censorship; the price we pay for a culture that supports art is understanding that the money that subsidizes it may come from complex origins, if not outright undesirable ones. The Met is in a financially complicated position — in the most recent fiscal year, its deficit was $10 million — and could reasonably be wary of alienating potential high-ticket donors. The museum could argue that it is already providing a public good by preserving and displaying great and often endangered art, and that it needs to focus on that mission and that mission alone.

Yet I think the Met, along with the other institutions that have benefitted from the largesse of the Sacklers, has options for taking a stand on the dubiously moral source of the Sacklers’ philanthropy. The Temple of Dendur, the sole item displayed in the Sackler Wing, is accompanied by extensive wall text explaining its provenance and the potential problems incurred by having a valuable piece of Egyptian culture relocated to the United States. (The Temple was relocated not through American appropriation, but as a gift from Egypt; it had to be removed from its original location, which was soon to be flooded after the construction of a dam.) Why not provide a similarly extensive explanation of the provenance of the wing itself?

Ditto for the Yale Cancer Center, at which Richard and Jonathan Sackler, Purdue Pharma board members and sons of Raymond Sackler, established a professorship: Yale could, barring legal restraints attached to that donation, publish a brief description of the Sackler’s role in the opioid crisis alongside any materials that mention the professorship in question. Yes, doing so might limit the Sackler’s desire to make future donations: That seems like a fair trade, as the opioid crisis has limited future possibilities for countless individuals, families and communities across the country.

Those are only two examples of the institutions that have benefited from the Sackler’s philanthropy. Here’s an idea that could apply to every cultural institution that might benefit from that philanthropy in the future: Rather than reject future donations from the Sacklers, insist that individuals who have profited from OxyContin match each donation they offer to make with one of the same size to one of the causes for which P.A.I.N. Sackler advocates, or other proven methods of opioid addiction treatment and prevention. It’s a win for the public: The cultural institution serves a civic duty and necessary relief efforts receive funding. And it’s a means of making the Sacklers choose a side: Either they lose their philanthropic reputation by refusing to aid efforts to address the public health crisis they helped create, or they maintain that reputation, and begin to make long-belated amends.

Regardless of what these institutions choose, if Goldin can sustain her movement, she’ll send a strong message: The arts and humanities by their nature serve the public. Even under financial difficulty, they can do so in an integrated fashion. Goldin was moved to create P.A.I.N. Sackler while recalling the AIDS activism groups of the 1980s; that public health crisis claimed the lives of many artists long before their time.

“The lack of response to AIDS wiped out my community; all my friends who carried my history are gone,” she wrote in her Time essay. “I can’t stand by and watch another generation disappear.”