In Cleveland, A Jewish Artist Honors Tamir Rice By Engaging His Community 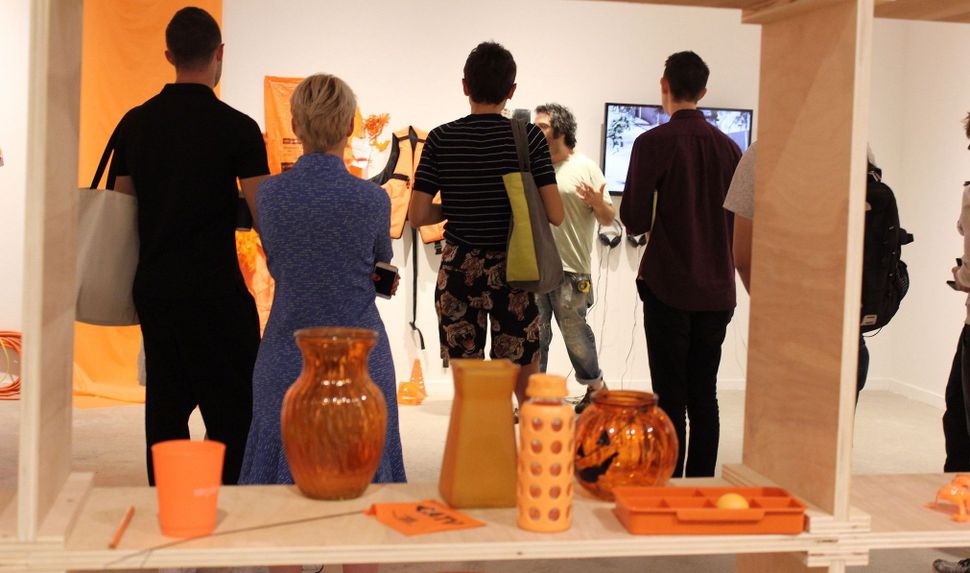 On November 22, 2014, 12-year-old Tamir Rice, who was black, was shot outside the Cuddel Recreation Center in Cleveland, Ohio by police officer Timothy Loehmann, who is white. Rice would die the following day from gunshot wounds to the torso.

At the time of the shooting, Rice was carrying a black Airsoft gun, a toy, the orange safety tip of which had been removed. The absent piece of orange plastic, made to distinguish between a real firearm and a fake, served as Loehmann’s rationale for opening fire. Now, a new exhibit by the Iraqi-American artist Michael Rakowitz, on display at the SPACES art gallery in Cleveland through September 30, is using the color orange — pervasive in safety vests, construction sites and roadside signs — to interrogate the nature of safety, as well as social ideas about race.

“When that minor object [the safety tip] got isolated, it was outrageous and infuriated me, but at the same time I thought, ‘That’s something to talk about, because we’re talking about color,’” Rakowitz told The New York Times’ Jillian Steinhauer. “If we need an indirect way of talking about black and white, maybe we can talk about red and yellow.”

His installation, titled “A Color Removed,” is a hybrid of collective healing, community outreach and readymade art. Rakowitz, who is based in Chicago, put collection bins around Cleveland institutions, inviting passerby to donate orange objects to go on display on the white walls of the gallery space. His goal: To scrub the city of everything orange.

As reported in The Times, some members of the community initially received Rakowitz with skepticism. His installation is part of FRONT, a triennial meant to bolster Cleveland’s art scene. The theme of the triennial was positioning Cleveland as “An American City” and Christina Vassallo, executive director of SPACES art gallery, suggested that Rakowitz’s project, first proposed in 2015, be included. “There is nothing more American than disintegrating community-police relations,” she told The Times. But as “A Color Removed” moved from planning to execution, questions were raised about the exhibit’s messaging.

The Times reports that many black community members, wondering if the exhibit’s premise was an unnecessary reminder of how unsafe they are, questioned the motives of the artist, who is not black or from Cleveland.

“We were well aware that [Rakowitz] is a Chicagoan and he didn’t have the same response or grief and we realized a Cleveland tragedy required a Cleveland response,” Vassallo told the Forward, emphasizing that Rakowitz was adamant about including artists of color in the process and end product.

Among the local talent featured in the gallery is activist artist Amanda King, who contributed both her own photographs and those of students in her art program for Cleveland youth, Shooting Without Bullets. Those photos are displayed alongside the work of several of King’s contemporaries. “Their contributions are a more explicitly personal counterpoint to the collection of orange objects, since all were living in Cleveland when Tamir was shot,” Steinhauer writes.

Concerns about the project had also centered on the lack of involvement of Samaria Rice, Tamir Rice’s mother. The Times reports Rakowitz and his team tried to reach her a number of times with no success. King, an advisor to Samaria Rice, approached her on Rakowitz’s behalf; after meeting him, Samaria Rice became an active collaborator on the project, pasting orange toys to poster board in what The Times argues is the focal point of the installation. One poster board features 12 orange colored plastic pistols, one for each year of Rice’s life, with handwritten text “Ohio is an open carry state.”

“I know the power of art,” Samaria Rice said in a speech at the exhibit’s opening, “Tamir and his sister Tajai loved the arts. They participated in art classes at Cudell Recreation Center, where Tamir was murdered. Tamir loved to create, to express himself. The process brought him joy.”

In Cleveland, A Jewish Artist Honors Tamir Rice By Engaging His Community