Israeli Artist Objected To Chicago Sculpture’s Restoration. Now Its Owners Have Locked It Away. 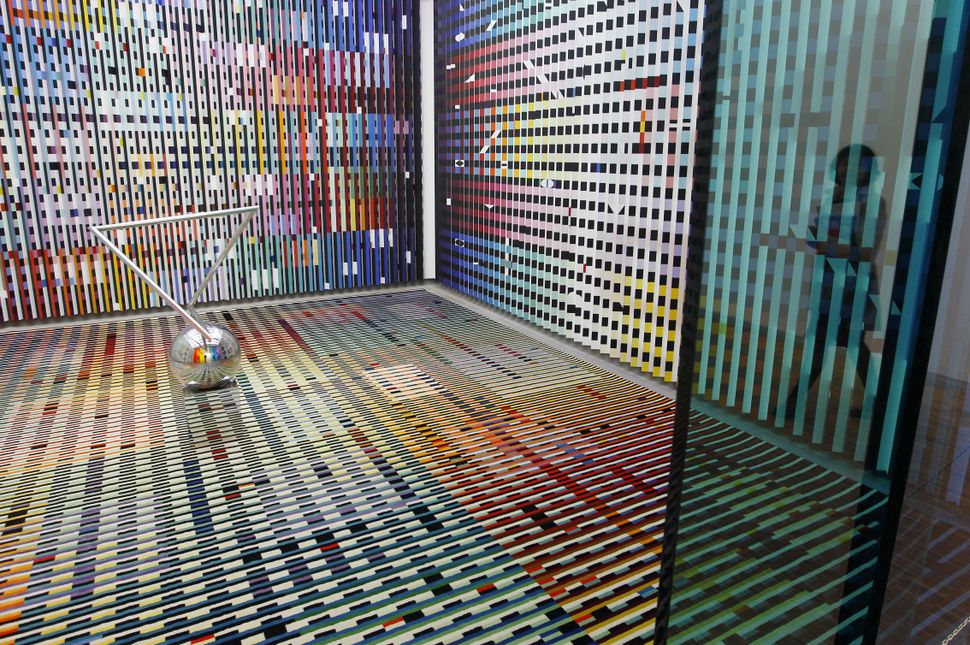 Chicago is a city renowned for its public art, from Anish Kapoor’s Instagram-omnipresent “Cloud Gate,” better known as the Bean, to Marc Chagall’s mosaic “Four Seasons” at the Chase Tower Plaza. Now, a piece of public art situated nearby both of those works, Yaacov Agam’s “Communication X9,” has been removed from the Michigan Avenue address in front of which it had stood for 35 years. Although if you ask the artist, he might say that “Communication X9” hasn’t really been in place since 2005.

As Crain’s Chicago Business reports, the owners of the building at 150 Michigan Avenue, CBRE Global Investors, removed “Communication X9” two weekends ago. (Crain’s had a leg up on the scoop: Their offices are in the now sculpture-shorn building.) CBRE, which purchased the building in 2017, justified the move in a statement to Crain’s as part of a “significant renovation project that will change the character of the building in a way that is no longer compatible with the sculpture.”

CBRE noted that they were considering either selling or donating the sculpture in the future.

Yaacov Agam’s bright, kinetic sculpture that once stood across the street from the Cultural Center and Millennium Park has vanished. https://t.co/bkiEYoDn31 pic.twitter.com/9qPOBa1rIQ

Yet CBRE’s move is only the latest in a sequence of decisions about the sculpture that have left Agam, whom Crain’s could not reach for comment, unhappy. After its installation in 1983, “Communication X9,” a slender, 43-foot-tall wall patterned with a mosaic of subtly shifting colors, stood in place for over 20 uninterrupted years. But by 2005, its carefully gradated design, crafted so as to have a markedly different appearance when viewed from different angles, had been sufficiently battered by the elements that the building’s then-owners, Jones Lang LaSalle, decided it was in need of restoration.

As The Chicago Tribune reported in April, 2008, when “Communication X9” was restored to its prominent position on Michigan Avenue, Agam, now 90, raised a ruckus.

“The public should know that this is not a real Agam,” he told The Tribune. “It is an unauthorized copy.”

At the time, Agam claimed that the restoration firm selected by Jones Lang LaSalle, the Conservation of Sculpture & Objects Studio, failed to follow through on a contract by which Agam would consult on the restoration. Per Agam’s account, Andrzej Dajnowski, who led the restoration project, went months without being in touch and failed to send Agam paint samples so the artist could provide feedback on the intended work. Early in the process, Agam said, he sent Dajnowski a three-dimensional model outlining what the restored sculpture should look like.

Brooke Houghton, at the time a spokesman for Jones Lang LaSalle, told The Tribune that Agam had in fact advised on the restoration throughout the process.

In an October, 2007 interview with The Tribune, Agam was insistent that the restored sculpture should not be referred to as his work. “This is not a restoration; it’s a reconstruction of my work,” he said. Yet when Crain’s reached Agam’s son, Ron, over text message for comment on the sculpture’s removal, he voiced clear objections to the move. “I see no reason it should be taken out of this prestigious location,” he wrote. “A city like Chicago should be proud to have the most famous Israeli artist in its center. It should not be treated in this disparaging fashion.”

Israeli Artist Objected To Chicago Sculpture’s Restoration. Now Its Owners Have Locked It Away.