In Frank Lloyd Wright’s only synagogue, a masterful blending of color and light 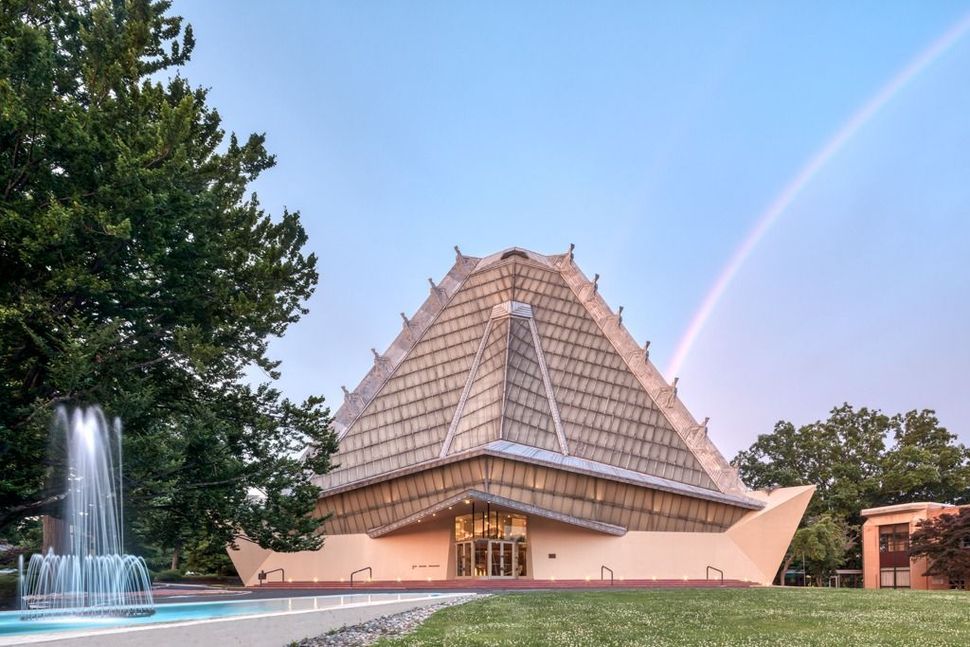 Color and Light: As he photographed the synagogue, Pielage found that he was experiencing and mastering the fluctuating sunlight just as Wright designed Beth Sholom to take advantage of shifting sunlight. By Andrew Pielage

Driving south along Old York Road in Elkins Park, Pennsylvania, a giant milky-glass tetrahedral dome, cross-hatched with cast-aluminum, seems to rise from the surrounding woods. A bold pastiche of prehistoric, modern and biblical, it simultaneously evokes Mayan ruins, a Japanese pagoda and Mount Sinai, while creating a wholly new form.

Beth Sholom, dedicated on Sept. 20, 1959, is the only synagogue ever designed by Frank Lloyd Wright and, with it, he aimed to re-invent the design of a modern American synagogue while creating a new American architecture. 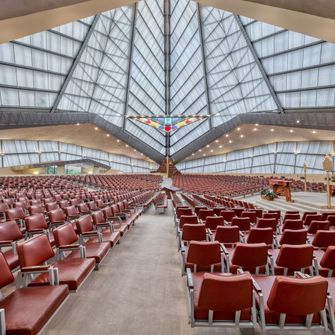 Part of the delight of the permanent exhibition about the synagogue’s physical creation is seeing the original correspondence between Wright and Rabbi Mortimer Cohen, the original rabbi of Beth Sholom who recruited Wright to manifest his vision. Wright had great respect for Rabbi Cohen, 37 years his junior. The gallery features letters that document the unique relationship between the two men.

On display is the letter Rabbi Cohen sent Wright on Nov. 16, 1953, introducing himself and stating his hope that the synagogue “will be an inspiration for generations to come, so that people will come from all over the country to see it and find here a ‘new thing’ — the American spirit wedded to the ancient spirit of Israel.”

Twelve days later, Wright sent Cohen a succinct reply: “Would like to talk with you concerning your project. Will be in New York at the Plaza next week. Could see you and Dr. Blai at that time if you were there.” Unusual for Wright, he began to see Rabbi Cohen as his equal partner in the design process. He signs one letter, “Affection and esteem – no end, Frank Lloyd Wright.”

In Beth Sholom, Wright hoped to achieve his ideal of an organic architecture, as influenced by his mentor Louis Sullivan; he had a twofold goal — that architecture should be seen as a living entity whose design drives from its function and that it should be wholly original and American, without borrowing from the European international style.

For Beth Sholom, Wright wanted to create a visceral feeling of spiritual transcendence in visitors. He designed it as a hexagon, mimicking the shape of two hands placed together in prayer, so that in his own words, “people, in entering it, will feel as if they were resting in the very hands of God.” This shape is repeated throughout the synagogue, including the inverted tetrahedron of the startlingly bright red, blue, green and yellow glass chandelier in the center of the sanctuary. 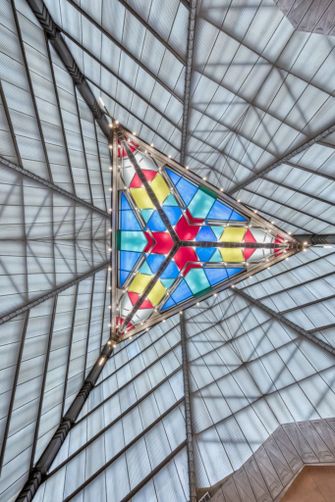 A Shape To Pray On: The inverted tetrahedron of the startlingly bright red, blue, green and yellow glass chandelier in the center of the sanctuary is meant to suggest hands clasped in prayer. By Andrew Pielage

Wright designed the synagogue so that as the time of day, weather and season change, the light varies as well, so that mood and effect constantly shift. A video in the permanent exhibition shows how different the sanctuary appears depending on the time of day and season. Wright also uses artificial light for similar effect: he designed the Ner Tamid so that it’s visible from the road, and he installed tetrahedral shaped lights along the interior surfaces of the lower walls to illuminate the entire dome from within when seen at night. Along the roof’s edges he designed menorah-like lamps. The effect of all of this illumination is to create, in his words, “a Mountain of Light,” a glass tower that, like a metaphoric Mount Sinai, radiates with light that everyone can see.

Although Beth Sholom may be one of the world’s best-known modern synagogues, it isn’t a household name in the way that many of Wright’s other buildings are.

“We’re the invisible Frank Lloyd Wright building that no one has ever heard of,” says Helene Mansheim, Beth Sholom Visitor Center Manager and tour guide.

Building Beth Sholom’s name recognition isn’t just a fleeting whim. The synagogue has a pressing need for preservation, in particular, for its roof. According to Mansheim, like many Wright structures, it “leaks like a sieve.” When I visited, several buckets and little wading pools were in use on seats and the carpet to catch leaks. 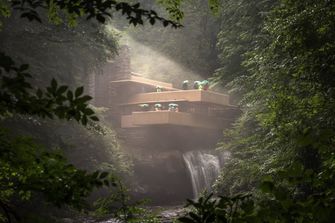 Fallingwater: Andrew Pielage is undertaking a project in which he photographs every existing structure designed by Wright; so far he has photographed over 100 across the country. By Andrew Pielage

After Beth Sholom the exhibit will travel to Taliesin, Taliesin West and Fallingwater. Pielage is undertaking a project in which he photographs every existing structure designed by Wright; so far he has photographed over 100 across the country.

The photographs selected by curator Sam Lubell for the exhibit include four photographs of Beth Sholom’s interior and exterior.

“To me a sacred space is nature. I feel as inspired standing at the edge of the Grand Canyon as the Sistine chapel,” says Pielage, adding that he feels it’s important “to blend both of those in, traditional sacred spaces and spaces Wright created through light, orientation of landscape and building materials that create that sacred space or sacred structure.”

Pielage describes his experience photographing one of his favorite images featured in the exhibit. “The best light for me is what we call golden hours,” says Pielage, “right in the early morning when the sun is coming up and right when the sun is setting, those are ideal times for me — light is softer, richer, tends to have a yellow hue to it which I like working with. I photographed in the morning at Beth Sholom and then came back in the afternoon. When I first got there, there were clouds and rain and it was chaotic.

“I hunkered down and waited for the storm to pass and it blew through pretty quickly. I ran out there when the clouds were clearing; you can see interior lights on at Beth Sholom too — that is the magic time for architectural photography. It’s really the best time to capture Wright designs as well; it’s that low light that Wright was such a master of interpreting and collecting and illuminating inside the spaces that he wanted.“

“The images I’m taking are long exposure images,” he added. “When you do that, the clouds were coming in and out that day, so at one point the inside of the synagogue can be really bright and in an instant can change. When a cloud comes over and you don’t get that direct light, in one sense it’s frustrating as a photographer, you want consistent light, but also it’s a sacred time for me because I saw all those fluctuations of light that Wright incorporated into the design.”

As he photographed the synagogue, Pielage found that he was experiencing and mastering the fluctuating sunlight just as Wright designed Beth Sholom to take advantage of shifting sunlight. 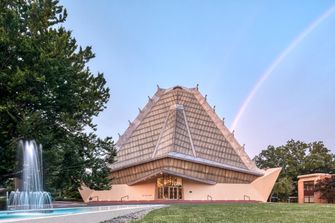 Color and Light: As he photographed the synagogue, Pielage found that he was experiencing and mastering the fluctuating sunlight just as Wright designed Beth Sholom to take advantage of shifting sunlight. By Andrew Pielage

He had a similar experience capturing light when he was a visiting artist teaching a photography workshop at Fallingwater, and rain started pouring down. “I saw light coming in from the left. It was like a spotlight from heaven, from Mother Nature, things that were out of my control,” said Pielage. “It was like a gift. I immediately took four or five shots and that’s what I got, one of those special moments that created sacred space for me.”

Eitz Hayim, the Conservative movement’s Torah commentary publication, says this about light: “Why has light been such a favorite symbol of God? Perhaps because light itself cannot be seen. We become aware of its presence when it enables us to see other things. Similarly, we cannot see God, but we become aware of God’s presence when we see the beauty of the world, when we experience love and the goodness of our fellow human beings.”

In Frank Lloyd Wright’s only synagogue, a masterful blending of color and light