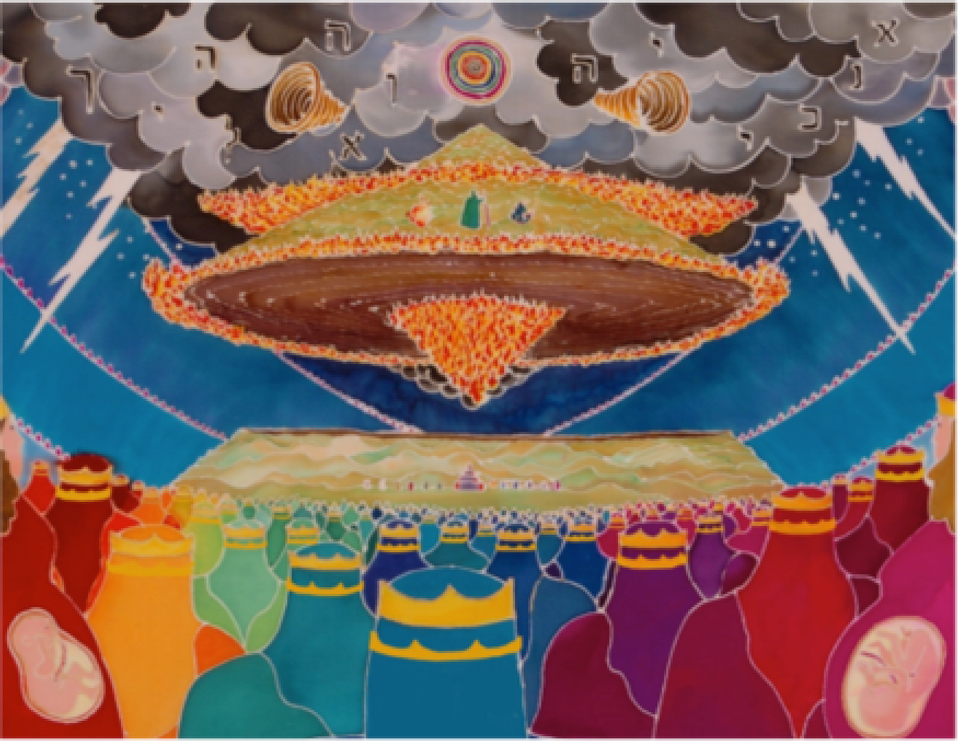 From Parsha Yitro: At Mt. Sinai, the Torah was given and was said to have risen above the heads of all the people flashing fire and smoke with rows of angels witnessing the revelation, and the Hebrews all double crowned as we synesthetically experienced the miracle, the most important event in Jewish history. By Jeremy Kagan

On my iPad, I’ve been drawing a visual response to this week’s Torah portion and the Midrash about it.

I do this every week and, over the last few years, I’ve made five sets of these drawings. The first set started on a whim. I had learned some odd stories about the first parsha Beresheit. One Midrash described the snake as a tall creature on two legs with a long neck and a lust for Eve. I had just learned an ancient Indian technique of painting on stretched silk and decided to illustrate this creation story. 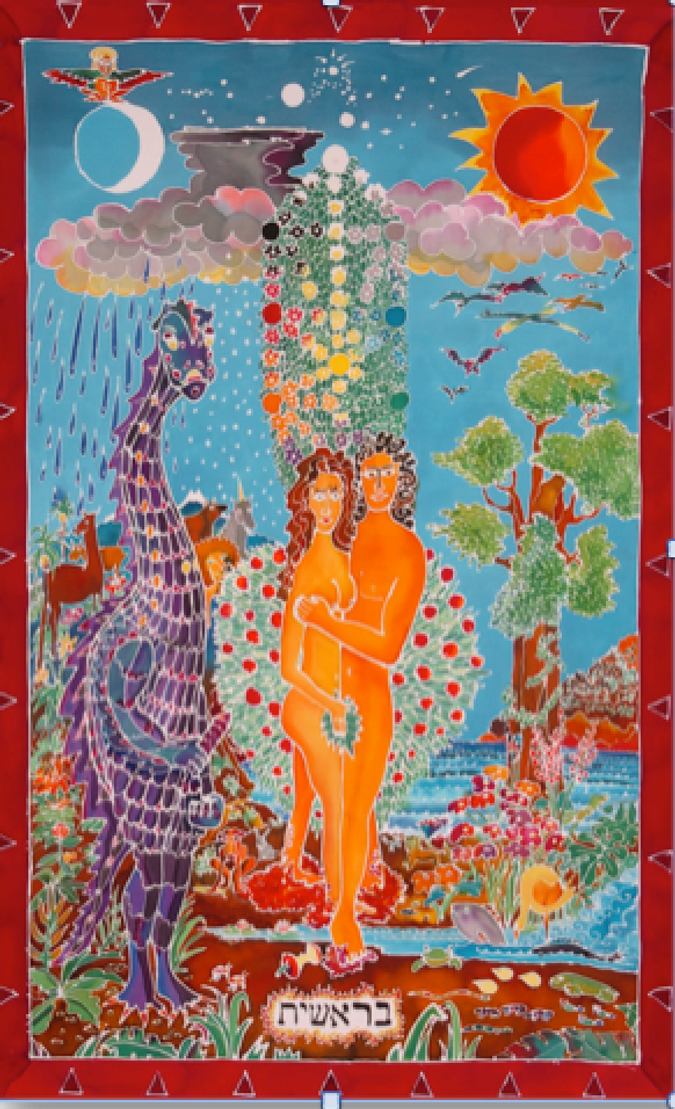 In the Beginning: A midrash describes the snake as a tall creature on two legs with a long neck and a lust for Eve. By Jeremy Paul Kagan

At the same time, I had also started studying Kabbalah with Rabbi Stephen Robbins in Los Angeles so the imagery reflected the colors and form of the Sephirot tree of life. I enjoyed making this piece and decided to make one for each of the 54 parshas.

This would also be the first time I actually read the Torah from beginning to end, and I assumed that if I drew one set a week, this would take a year. But doing the first set actually took five years. I was quite active as a movie director, so I would carry canvases to my locations and paint on evenings and weekends if I could. Shabbos for me meant and still means seeing the words and tales as images.

The process of making these paintings was complex. It began with reading the parsha for the week and various commentaries. Then, I’d make a quick pencil drawing, which I would develop into a larger detailed drawing that I would then copy onto stretched silk.

I’d copy these lines with a thin kind of glue. Once it was dry, I’d apply a special colored ink that you hope will be contained within the glue lines. If it isn’t, you have to start all over on a new silk. 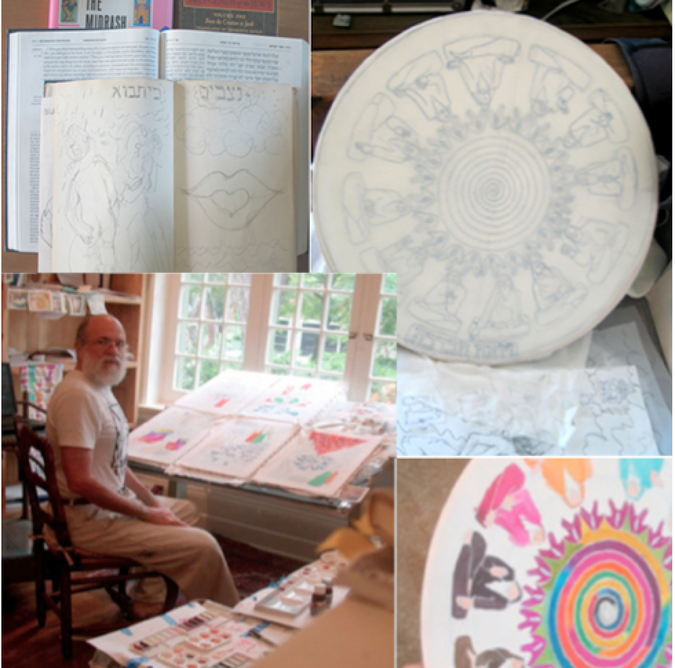 In his Studio: A collage of images shows Jeremy Kagan at work on his paintings. Courtesy of Jeremy Kagan

Afterward, the silk is put into a wet clearing for half a day, removing the glue. Then it’s off to dry cleaning and stretching on frames.

Then, I’d made pencil drawings to take on the Haftorahs, most of which I had never read before, followed by the sophisticated digital drawing programs on the iPad. For the last four years, I have spent each Shabbos generating these. Perhaps this isn’t an occupation that would be approved by the more orthodox, but it has brought me closer to Judaim. Recently, I discovered Sefaria, an online collection of Torah texts, which has allowed me to delve into the Midrash and Kabbalah writings for inspirations.

How to be a Jew? For me, the answer is to draw it. In researching each drawing, I get to explore our texts and interpretations, even though I am sure I miss much of the deeper insights by not reading Hebrew.

The second commandment declares that you are not supposed to make images of God, which would suggest that paintings and drawings that deal with God or God’s creations would be breaking that commandment. Though there have been sporadic examples of primitive anthropomorphic frescoes, Jewish art, which tends to be ornamental and decorative, has in some ways been reflective of this admonition.

Not until what is called the Enlightenment in the 17th century did we start to see Jewish artists; and as Jews began to separate themselves from orthodoxy, various expressions of our culture in art began to flourish — Pissarro, Rothko, Lichtenstein and Chagall come to mind.

When I was young, Passover was the Jewish holiday that I enjoyed most. My father, a reformed rabbi in Mount Vernon, New York, led the service with vigor and humor and I got the chance to show off by singing the four questions. As an adult, I began making Haggadahs for our family and illustrating them. This celebration of freedom and its contemporary meaningfulness in identifying with others who are less fortunate resonated with all of us at the tables. And the images helped to bring out the themes of the story.

My father loved the arts and was an amateur painter, so the idea of art being somehow anti-religious never emerged in our family. In fact, my drawings were seen as a demonstration of the fact that I had potential. My parents’ friends suggested that my parents send me to a specialized art school. When I was very little, they had sent me to an after school class with an artist who taught color and form and clay. Still, though I was always drawing, they decided against art school, and never told me that they had considered it until many years later. I imagined they feared that the life of an artist would be a challenging one. 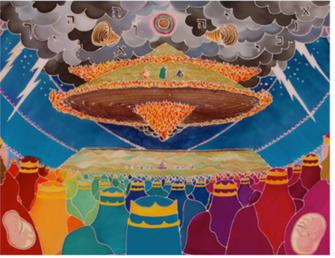 From Parsha Yitro: At Mt. Sinai, the Torah was given and was said to have risen above the heads of all the people flashing fire and smoke with rows of angels witnessing the revelation, and the Hebrews all double crowned as we synesthetically experienced the miracle, the most important event in Jewish history. By Jeremy Kagan

And they were right. I became a filmmaker, and cinema has been my occupation for five decades. When I was a kid, I was only interested in animation. I didn’t particularly like the B movies that showed in our local theaters, but I was always keen to see the six or eight cartoons that played before the features. After college at Harvard, where I wrote a thesis about the Russian filmmaker Sergei Eisenstein, I went to graduate film school, fully intending to go back to Harvard to get a PhD.

My first film school project was an animated film called “Once Upon a Line,” which
won a lot of prizes and actually played in theaters as the animated short before the feature.

While directing “Crown Heights,” I started visual responses to the Haftorahs. I drew these each week. 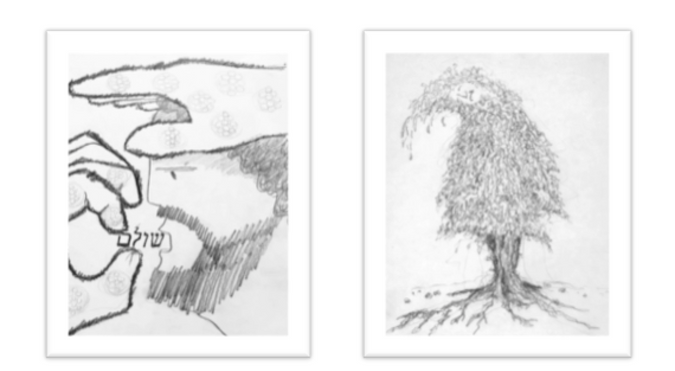 From the Haftorahs: Kagan illustrates the scene from ‘Isaiah’ where God puts words in his mouth and from Amos speaking of the ignorant as a bent tree. By Jeremy Kagan

With the arrival of the iPad, I began making a new set of weekly colored pieces responding again to the Torah portions. I would accompany each drawing with an explanation of the image. 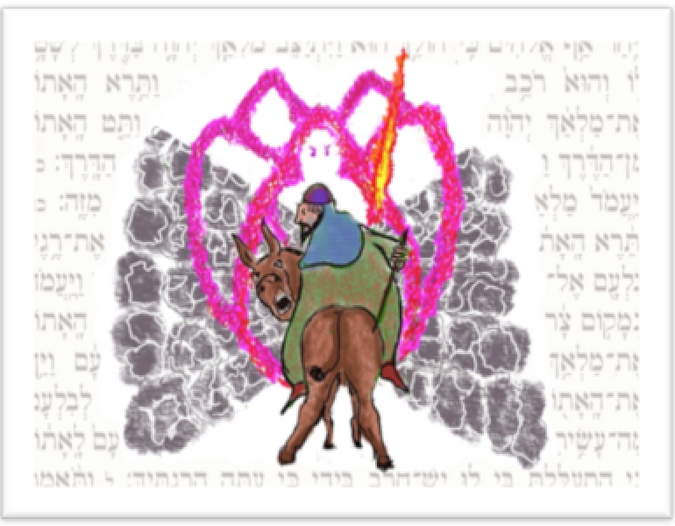 A Warning From a Donkey: The false prophet Balaam, who is about to damn the Hebrews, is confronted by an angel he doesn’t see, but his donkey does and turns to speak to him, warning him of his mistakes. By Jeremy Kagan

The next year I made a series of black and white drawings of the Haftorah using the app Procreate. I used some of these to make a 30 minute semi-animated film, which plays on JLTV. 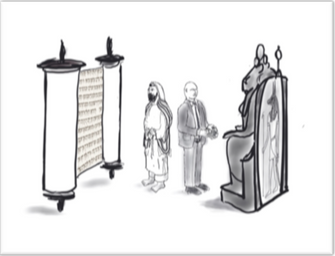 Two Paths: In Ezekiel, we are presented with a choice of Torah or corruption. By Jeremy Kagan

Last year, having been fascinated in the past by the stained glass windows in European churches, I decided to do a series that would be a Jewish version of stained-glass oval windows, which would feature the seven Aliyah set within the colors of the seven lower sephirot, one for each day. 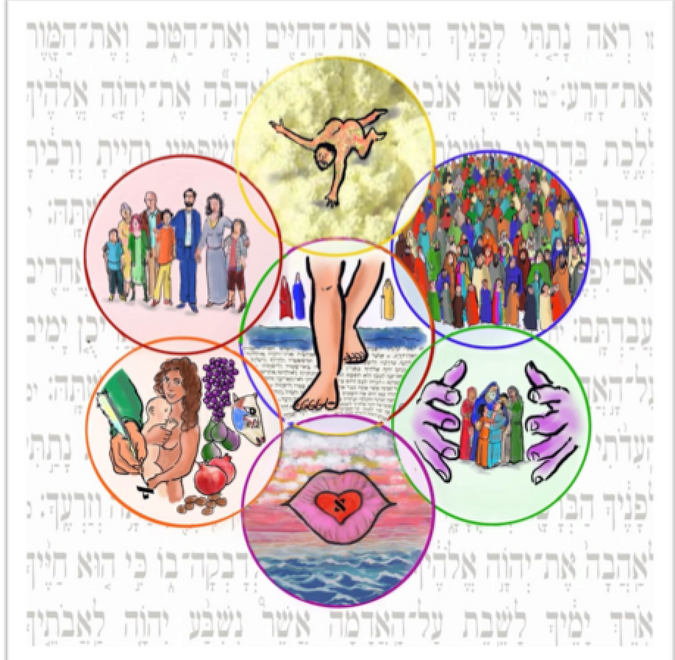 One For Each Day: Kagan painted a seven Aliyah set mimicking the style of stained glass windows. By Jeremy Kagan

This year I’ve begun another series of responses based not on the actual text of the Torah but on commentary and stories about it – the Midrash. I use photographs and then superimpose drawings on top of them.

In one, Abraham tells his idol-making father and King Nimrod that all the statues have been broken by the one with the axe and his father accuses Abraham saying: “How can a statue I made have any power?” and Abraham shrugs in agreement.

In another, I paint the story of how the second plague actually began with only one enormous frog. The Egyptians wouldn’t accept the wonder and tried to destroy it, but instead of dying, it spews forth the myriads of frogs that infested all of Egypt.

The entire collection of these sets of Torah and Haftorah images is on this website. 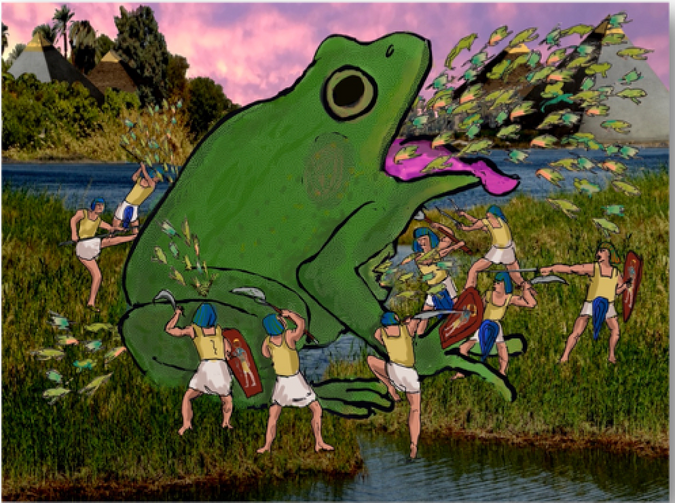 The Frog of War: It is said that the second plague began with one giant frog. By Jeremy Kagan

Each illustration draws me closer to my history, our history, my family, our ancestors and to reminding me of the ethics, imagination, and abiding courage of our sages and our people. I have had the gift of being a Jew in America. 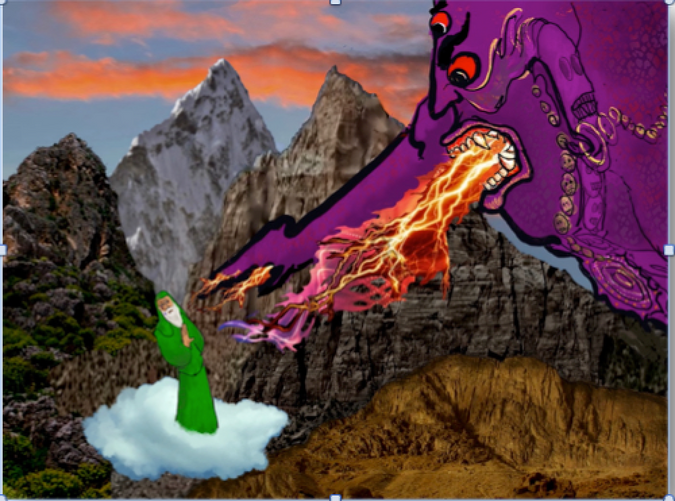 From Parsha Yitro: Moses is carried by a cloud to Mt. Sinai where he is confronted by enormous fire-breathing angels who ask why humans should be given this sacred text. By Jeremy Kagan

Having the fortune of grandparents who risked immigration and the unknown leaving Europe and probably escaping death in the Holocaust. My family tree reaches back to rabbis on all sides for hundreds of years. They, of course, were all orthodox and may not have approved of my drawings. But I am in their debt for bringing me here where I have had the blessings, as is said in morning prayers, of kindness, mercy and grace to be a creative being. And I am grateful.

Jeremy Kagan is a prolific director of film and television, and a professor at the University of Southern California.