The Yiddish Path to Acting Fame and Fortune 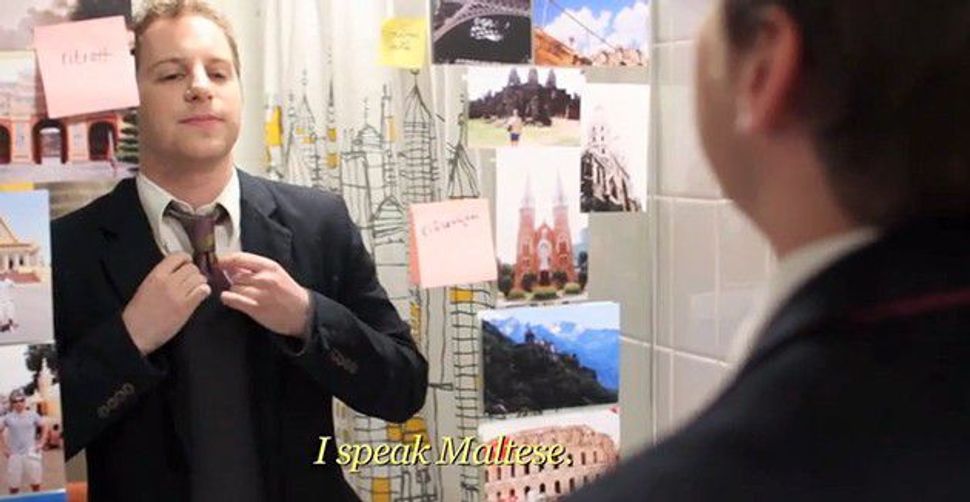 A version of this post appeared in Yiddish here

Like all actors attempting to break into the notoriously difficult profession, Michael Levi Harris is seeking to stand out. Luckily, Harris has a talent that is almost unique: he has an exceptional knack for languages. Not only can Harris speak many tongues but he also has a rare aptitude for accents and can, with a little practice, perfectly mimic the sounds of languages that he doesn’t know.

Harris’s linguistic skills are highlighted in the new short film “The Hyperglot,” a romantic comedy in which the main character, Jake, a talented polyglot played by Harris, tries to locate a woman with whom he has instantly fallen in love after seeing her on the subway.

Because she left behind a book in Maltese, Jake begins to learn the rare language in case he ever meets her again. While Jake looks for the pretty Maltese woman, he stumbles into a series of comical incidents in which he has the opportunity to speak many languages. By the end of the film Harris’s character speaks Arabic, Icelandic, Italian, Portuguese, Japanese, Russian, Norwegian, both American and British sign-language and finally, Yiddish. Watching Jake, the audience soon learns that although the hyperglot can speak at least 11 languages, he can’t properly flirt with girls in any of them.

Despite the fact that “The Hyperglot” is a vehicle to spotlight Harris’s linguistic talents, the film has more going for it than just its multilingual gimmick. The clever script, written by Harris, presents several comical and absurd moments, but also reveals a great deal about both Jake and the difficulties that young people face in New York’s ruthless dating scene. The most important element of the script, however, is its pacing: Harris has pulled off the extraordinary feat of giving his 23-minute short the emotional strength of a film that lasts three times as long, without making the action feel rushed.

“I’d never written a script before — this was my first.” Harris wrote in an email to the Forward. “It is a wonderful and satisfying experience, but also incredibly difficult… If you notice, in the opening scene, there is a close up of my eyes, and they are as red as can be — that’s because I was up all night the night before re-writing a different scene, and was going on four hours sleep — which was about what I’d been getting for the two weeks leading up to the filming. I was the executive producer, so the responsibility always fell on me to put out fires or come up with solutions if no one else on the team was able to come up with one… In the end, my acting was probably enhanced by the fact that my mind was on everything but the acting.”

Harris had decided to write his own script because “I just was sick of waiting to be cast in something, so I thought I’d write my own film. The idea was really born at a party of an actor friend. He was going on and on about how actors should take their careers into their own hands and produce their own stuff.”

When the actor explained that short films can be produced for only $300 dollars and that they only need to be five minutes long, Harris decided to make his own short film based on his own comical and absurd experiences in New York. After two years of writing and rewriting his script the final product emerged.

Harris’ path to becoming an actor is atypical. Although he performed in various productions as a child and acted at Columbia University, he thought that a career in acting was a “foolish dream.” Harris gave up on the idea, instead studying Middle Eastern languages and cultures.

After completing his studies at Columbia, Harris received a golden opportunity. “The summer after I graduated, I was offered a sweet house-sitting deal on the Upper East Side of Manhattan. During that summer, with no job and no rent, I thought — if I’m ever going to get the chance to try acting, it’s now.” Harris subscribed to Backstage Magazine and answered a casting call where he had an interview with none other than Robert De Niro. He got the role, a bit-part, but it earned him $2,000 dollars and a membership in the Screen Actors Guild.

After getting his first role, Harris decided that in order to become an actor the only things holding him back were money and time, and he began looking for a job. His studies and fluency in Arabic landed him a post at a bank in Dubai. After working there for a year Harris returned to New York where he enrolled in a training program for actors.

At the same time he wrote a letter to the National Yiddish Theater-Folksbiene because he knew Yiddish and wanted to act on the Yiddish stage. Eventually he landed his first professional theater role in the Folksbiene production “Shpiel! Shpiel! Shpiel!,” a one-act play written by Murray Schisgal. In the play Harris portrayed a greenhorn pushcart vendor.

Harris began studying Yiddish as a child because he was disappointed that many of his classmates grew up speaking other languages and he, as a “boring American,” only knew English. When he discovered that his grandparents spoke Yiddish, he realized that he wasn’t exactly the “boring American” he had believed himself to be. By then his grandfather was nearly blind and somewhat senile, but Harris decided to speak with him in Yiddish.

“I took a Yiddish language instruction book out of the Scarsdale Public Library. Armed with my little phrasebook, I went to see my grandfather… When I saw him, I said ‘Ikh bin dayn eynikl, Michael.’ [“I’m your grandson, Michael”]. ‘Yo?’ [“Yes”] he responded, as if it were completely natural that we were conversing in Yiddish. ‘Du bist mayn eynikl?’ [“You’re my grandson?”] This made him laugh, and we carried on talking about yesteryear and people who’d been dead for 50 years… mostly in Yiddish. It was a precious experience, and my only regret is that it was the last time I saw him alive. How I wish I’d thought to do it even a year earlier. Timing is everything in life — and when it comes to Yiddish and genealogy, I’m always just a few years too late.”

Harris went on to study Yiddish at Columbia University, as well as at the Vilnius Yiddish Institute.

After a few years in New York Harris again hit the road, this time travelling to London, where he is now studying to earn a master’s degree at the prestigious Guildhall School of Music and Drama. He is also working on future projects, including two new scripts and a film in Yiddish with the Israeli director Tomer Sinai, who worked as the post-production coordinator on “The Hyperglot.” As far as his future plans, Harris hopes to be able to work both on stage and in film and television in America and England.

“The Hyperglot” will certainly help. The film, which is now making the rounds on the festival circuit, has received several prestigious awards, including an audience award for best short film at the Friars’ Club Comedy Film Festival and awards for best actor and best comedy at the International Film Awards in Berlin.

The Yiddish Path to Acting Fame and Fortune