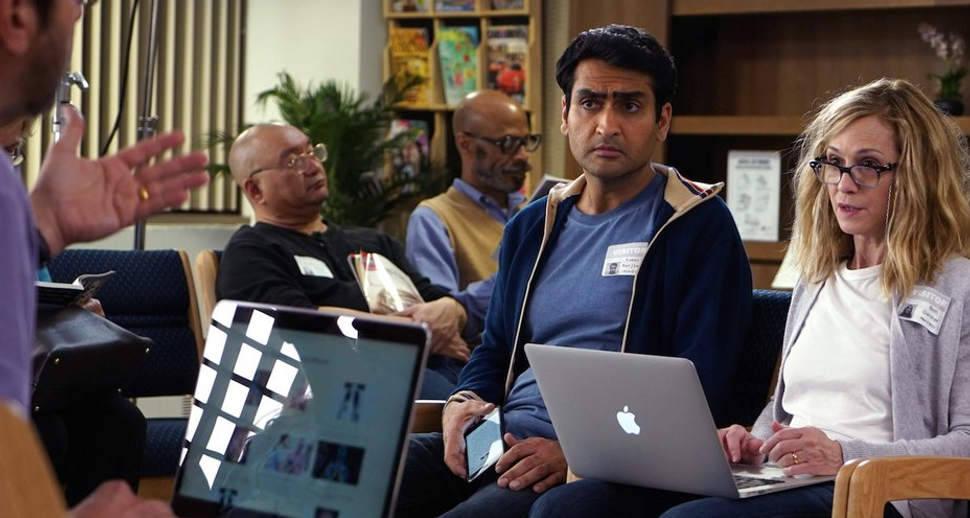 This summer’s hit romantic comedy, “The Big Sick,” offers a hilarious, tender, fresh take on assimilation in America, the struggle to succeed in the entertainment business, and the conflicts surrounding questions of inter-ethnic romance. It is, as others have suggested, the 21st century’s “The Jazz Singer.” And the film is not an ironic parody of its predecessor’s themes, but a sincere, touching exploration of them.

“The Jazz Singer” (1927) is famous for being the first “talking picture” (or the harbinger of death for silent cinema). But scholars of Jewish film like Michael Rogin and Lawrence Baron understand it as a kind of master narrative for Jewish assimilation in America. In the film, cantor’s son Jack Robin, played semi-autobiographically by Al Jolson, dreams of singing “jazz” on Broadway rather than following his predetermined path to take his father’s place in the synagogue. Along the way, Jack falls in love with a decidedly non-Jewish dancer named Mary. When his father walks in on him singing jazz in their home, he famously cries, “I have no son!”

In “The Big Sick,” it’s a Muslim, Pakistani mother played by Zenobia Shroff who makes a version of this pronouncement: “You are not my son!”.

Her son’s offense: The charming Kumail Nanjiani, playing an eponymous version of himself, dreams of succeeding as a stand-up comedian instead of obeying his parents’ wish that he go to law school. To boot, he begins a romance with Emily, played by Zoe Kazan, a decidedly non-Pakistani, non-Muslim therapist he meets while performing at a comedy club.

What does it mean to watch a version of “The Jazz Singer” without Jews? What does it mean to laugh along with a gaggle of stand-up comedians – an American profession dominated by Jews for a hundred years – when not one of them is Jewish? And how can you have a film about the perils and promise of intermarriage – once a euphemism for Jewish-Christian romance in America –without a single Jew on-screen?

“The Big Sick” is about being Muslim in America in the age of the Muslim ban, racism, and the gentle tug between tradition and modernity. But its similarities to “The Jazz Singer” mean one thing for Jews – that “Jewish” is no longer the primary metaphor for the project of Americanization.

Despite behind-the-scenes Jewish influence from director Michael Showalter and producer Judd Apatow, “The Big Sick” is not a “Jewish” film. Instead, it contributes to a growing body of film and TV narratives – like “Fresh Off the Boat,” “The Mindy Project,” and “Master of None” – that offer comic stories about what it means for immigrants and their children to become American without explicit Jewish content.

It would be inexact to say that Asian Americans are the “new Jews” of film and television. Not only are Asian and Middle Eastern experiences of immigration radically different from Jewish ones, but hilarious Jewish voices and stories still grace screens large and small. (Think “Crazy Ex-Girlfriend,” “Broad City,” and “Curb Your Enthusiasm,” set to return for its ninth season this winter). Still, “The Big Sick” makes it clear that the narrative made famous by “The Jazz Singer” is no longer a strictly Jewish one.

The racism lobbed at Kumail in “The Big Sick” is notable: “Go back to ISIS!” a heckler calls from the audience during a stand-up set. Kumail takes the comment in stride; he’s clearly heard worse. But this kind of verbal violence is absent from “The Jazz Singer,” in which the characters’ primary concern is rejection from their own people, the Jews, rather than external anti-Semitism.

Kumail must also face rejection from his family – his mother disowns him when she discovers he is in love with a white woman and that he will not marry one of the potential Pakistani mates she has arranged for him. Yet his options are even more unappealing than those of Jack in “The Jazz Singer.” Kumail may follow his family’s wishes and live a life devoid of the romantic self-determination upon which American culture places a premium. Or he can lose his family and spend his life with Emily. In either case, the threat of verbal and physical violence looms even in his safest spaces.

“The Big Sick” pivots around the big question of race in America. In the 21st century, that question plagues Jews in new ways, as most Jews in this country are now able to “pass” for white people. For all the ongoing and overt anti-Semitism that the so-called “alt-right” has unearthed with the victory of their preferred presidential candidate, most American Jews are very safely, very obviously, and often in spite of themselves, considered to be white people. (A broad American perception of Jews as white, it’s worth noting, contributes to the silencing of Jewish voices of color.)

At the end of “The Jazz Singer,” Jack Robin abandons a critical performance in order to stand in for his ailing father and recite the kol nidre prayer. In the following scene, Jack performs on Broadway as his mother and girlfriend look on proudly from the audience. At the end of “The Big Sick” Kumail also reclaims his place within his family, who, the film suggests, will reluctantly accept him. Like in “The Jazz Singer,” the final scene features Kumail performing onstage. Ninety years after Jack Robin got to take center stage in synagogue and on Broadway, Kumail continues his story over potato biryani and in the New York stand-up scene.

If Muslim-Americans are telling stories on screens that once would have been told by Jews, Jews do not have to respond by mourning the loss of their claim to those narratives. Instead, they can tell a new story with new complications, one in which they see themselves as much in the racist boy who shouted “Go back to ISIS!” as in the stand-up comic on-stage.

Shaina Hammerman is a San Francisco-based media critic. She is the author of “Silver Screen, Hasidic Jews: The Story of an Image” and can be reached at @sjhammertimes