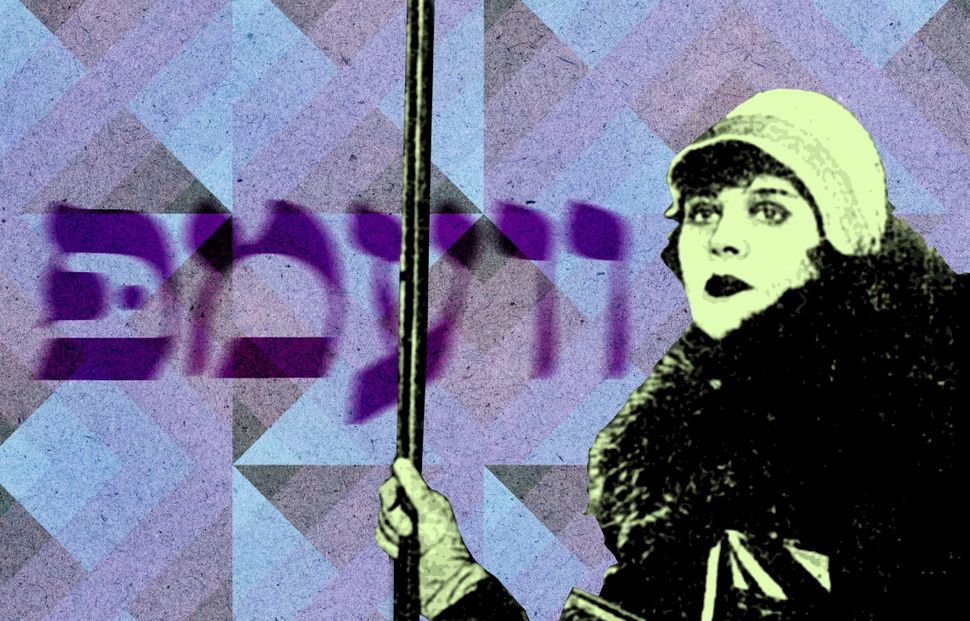 A century ago the world was in the throes of the Great War, women didn’t yet have the vote and the movie industry was in its infancy.

Two Jewish refugees from the wine-growing Tokaji region of Hungary — Adoph Zukor and William Fox (born Fuchs) — were beginning to make their mark on the fledgling movie business. The founders of what would become Paramount Pictures and the Fox empire would go on to have momentous careers, but the most famous Jew in the movie business in 1916 was a female star — Theda Bara.

Before femme fatales or screen sirens graced celluloid, “vamps” ghosted themselves onto silver nitrate. Bara was the original vamp, in the new sense of “a woman who uses sexual attraction to exploit men.” The name itself came from her role of The Vampire in the 1915 film “A Fool There Was.”

In a 1927 edition of the Forward, the Yiddish translation of “vamp” is farfirerin” (literally “a person who leads astray”), but the paper also renders it phonetically in Yiddish, or — as unfortunately mis-retransliterated by an English caption writer (or perhaps the typesetter or composer) for the Forward in 1927 — “the wamp.” 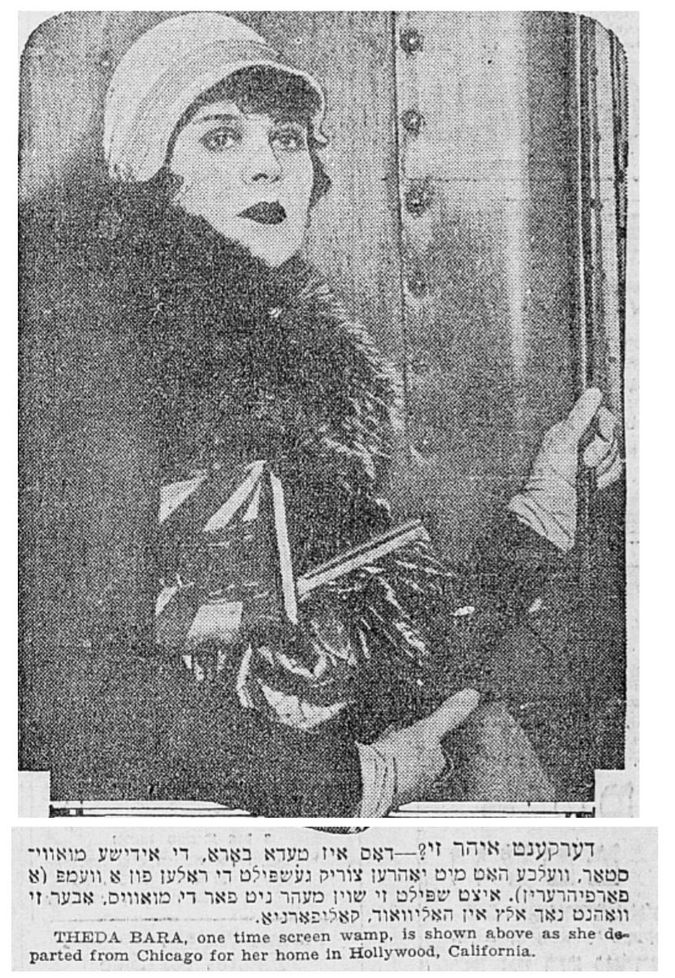 Based on the Rudyard Kipling poem “The Vampire,” “A Fool There Was” would set up Bara as what Eve Golden and others call the first sex symbol of the movies. She was more sensual than Mary Pickford and more famous than the early Charlie Chaplin. Her fame shone brightly, yet so briefly that she never made it to the talkies.

Her career was surprisingly short and entirely silent. She starred in iconic but lost movies such as “Carmen” (1915), “Romeo and Juliet” (1916) and “Cleopatra,” (1917) but by 1919, Fox, in close control of his namesake company, already coldly viewed her earning abilities as limited, and he refused to raise her salary to $4,000 a week (about $56,000 a week in today’s money), which she had been expecting.

She left Fox and tried her hand at theater. She had a minor commercial success appearing on stage in “The Blue Flame,” despite overwhelming critical panning. After that she largely retired to live with the British director Charles Brabin in their home in Hollywood. Only a couple of desultory attempts at movie comebacks in 1925 and 1926 interrupted a retirement that lasted until her death in 1955.

But Bara — born Theodosia Burr Goodman to a Polish tailor and his Swiss wife in Cincinnati in 1895 — was not the person you might expect to lead the fledgling genre toward sex and seduction. Named after Vice President Aaron Burr’s daughter, Bara was — according to scholars and critics — no beauty. Kira Cochrane writes in The Guardian that her “figure isn’t bad, though it could most accurately be described as ‘matronly.’ She has a bulbous nose, an overbite and a definite squint.” Vanda Krefft, author of a new biography of Fox (“The Man Who Made the Movies,”) describes her as having a “broad, flat face, asymmetrical features… and [a] thick-waisted, chubby-legged figure” before quoting director and writer Frances Marion describing Bara’s performance in “Romeo and Juliet” as “large, bosomy, and rather heavy-thighed.” 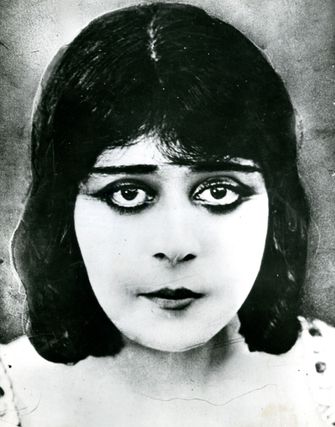 Nor, despite the on-screen sultry behavior and skimpy clothing that drove crowds wild, was Bara like that in her personal life. According to Krefft, Bara lived a staid, rather boring life with her family before she began her calm stable marriage. There was no hint of an affair with Fox, in an era — alien to us today — when studio heads and young actresses were often linked. Both in appearance and manner, Bara was an unlikely proto-siren of the silver screen.

Sadly, with the exception of “A Fool There Was,” none of her full-length movies survived poor preservation techniques or the tragic Fox archive fire of 1937. This means her artistic legacy is difficult to understand fully. We may never know how she really was able to embody silent seduction so successfully that the archetype would continue as a staple of moviemaking for a century and beyond.

We do, however, have some sense of how – even as Fox and his marketers cast her as an exotic Arabian actress — Bara handled the dichotomy between her exotic screen roles and her more down-to-earth private life. To quote Krefft again:

Once, a woman wrote a letter accusing her of breaking up happy homes. Theda wrote back.

I am working for a living, dear friend, and if I were the kind of woman you seem to think I am, I wouldn’t have to.

Thanks as always to Chana Pollack for archival help.