The Oscars Shaped My Feelings About Womanhood. Now What? 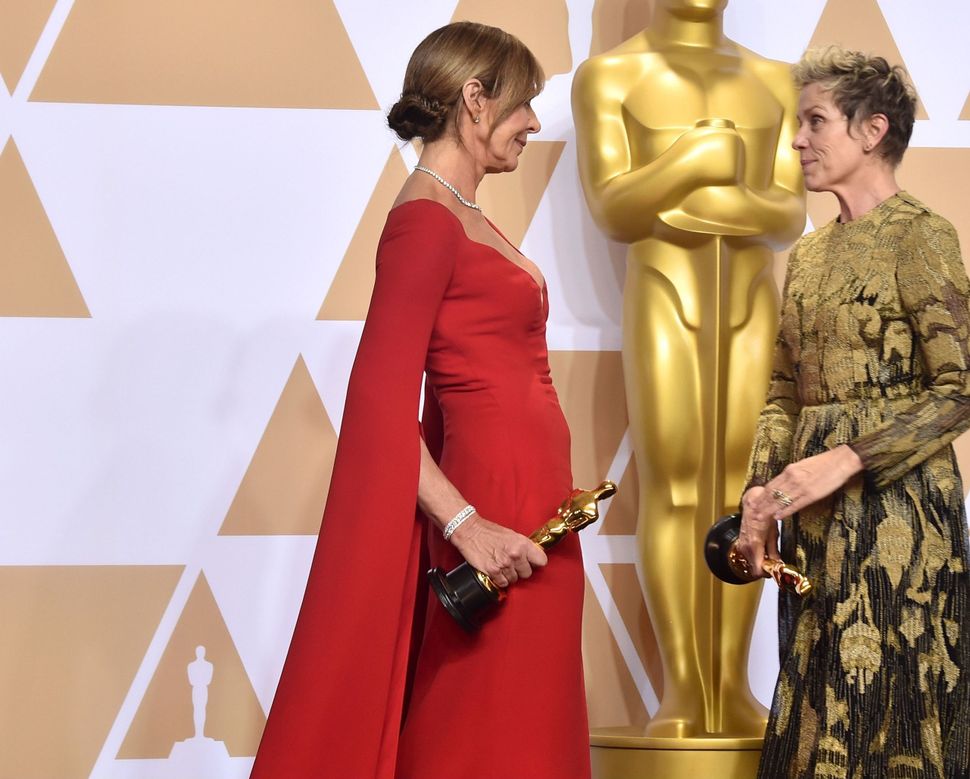 In 2016, my roommate and I became friends over movies: Trapped in our top-floor apartment by a weekend blizzard, we watched “The Princess Diaries” and “Cinderella,” two ambitious young women briefly surrendering to the fantasy of being princesses in a tower. The snow melted, and we went back to work, but the bond was sealed. She let me in on a secret: She loved — loved, loved — the Oscars. Last night marked our third Academy Awards. We lit candles and ogled gowns and, after Lee Smith’s acceptance speech for film editing, laughingly repeated his charming postscript: “Matthew McConaughey, awesome!”

Since childhood, I’ve watched the Oscars almost every year. Yet each year watching becomes harder to justify. I learned a while ago that the awards themselves represented not the impartial hand of artistic judgment, but the exceedingly partial hand of a biased and often regressive industry. I look forward to the red carpet, but after a certain point my anticipation became paired with outrage over the absurd physical strictures the evening imposes upon women. (How could anyone bear sitting for hours in any of those dresses, Maya Rudolph’s turtlenecked haute housedress aside?) The hosts are always boring and often offensive, and the occasional earnest expressions of political goodwill register as shallow, which they usually are.

After all, in the much-hyped wake of #MeToo, it hadn’t turned out to be different. Yes, Annabella Sciorra made a welcome and obviously painful return to the ceremony after being allegedly blacklisted by Harvey Weinstein; yes, Weinstein was the subject of many barbed jokes; yes, Casey Affleck, who won last year’s award for Best Actor without institutional acknowledgment of the two women who had accused him of sexually harassing them on the set of 2010’s “I’m Still Here,” ceded the privilege of presenting the award for Best Actress to previous winners Jennifer Lawrence and Jodie Foster.

But the Oscars made ample room for men whose alleged offenses were more convenient to ignore. Kobe Bryant took home an award for Best Animated Short despite a 2003 rape allegation against him, and Gary Oldman won best Actor despite his ex-wife, Donya Fiorentino, having accused him of physically assaulting her in front of their children in 2001. Even more tellingly, women, as is the norm, won few of the awards for which they were nominated outside those categories exclusive to women: Best Supporting Actress and Best Actress. In an endearing and eminently telling slip of the tongue last night, my roommate referred to the former of those honors as that for “Best Supporting Woman.”

Why did I watch?

In the same way that a guilty love for princess stories had catalyzed my friendship with my roommate, I think the Oscars, despite their inherent sexism, have forged some of my most intimate ideas about the joy of being a woman. Yes, joys. There are few other public spectacles in which one sees any coordinated celebration of women, let alone a celebration so characterized by their mutual expressions of happiness and self-confidence. Where else, in a year, do any of us have a chance to see women applaud one another with such seeming enthusiasm, or claim their own success, onstage, with pride?

It’s a skewed view of the proceedings. Too many women, receiving awards, credit them to others, feign a demure astonishment that belies their accomplishment, or come close to apologizing for their victory. And the sisterly support I find so heartwarming is inevitably more complicated than it appears; this past autumn’s revelations about Hollywood’s systemic sexual harassment and assault showed that women, just like men, are fully capable of enabling women’s marginalization.

Yet even so, the Oscars on their surface — all, until this year, that we have usually seen — have won my allegiance because they’ve exemplified something beautiful about being a woman. We often talk about the popular impact of the entertainment industry’s portrayal of women with the language of imposition or deception: Women feel forced to present themselves in a certain way, or coaxed to believe that if they’re just a little more something — clear-skinned, glossy-haired, skinny, self-effacing — they’ll reach the blessed state of Maximum Woman Happiness.

What we miss is the trick: Those portrayals can be not only gloriously freeing, but also free from requirement. They can make us think that it is wonderful to be a woman now, full stop, no matter how systematically talented women lose awards to men. I grew up and found that being a woman was certainly not Hollywood-wonderful; one night a year I got to imagine, again, that it was.

The #MeToo movement has broken that imagination. Good. Now the Oscars, like the movie business, need to find a way to make it real, to celebrate women genuinely, without requiring them to be anything other than what they are. God bless Frances McDormand, who redeemed a great deal of last night’s pretension with her straight-faced demand that her fellow female nominees stand up and be recognized, and then her advocacy for inclusion riders, contract clauses that demand that the composition of a film’s cast and crew reflect contemporary demographics. Here’s hoping the Academy follows not just McDormand’s advice, but also her lead.

I woke up this morning, strange but true, with a few flecks of glitter on my face. I couldn’t guess its source. It seemed like a benediction, and a wink at indiscretion: Last night’s distant glitz had marked me. I laughed at it in the mirror. And then I washed it off.

The Oscars Shaped My Feelings About Womanhood. Now What?