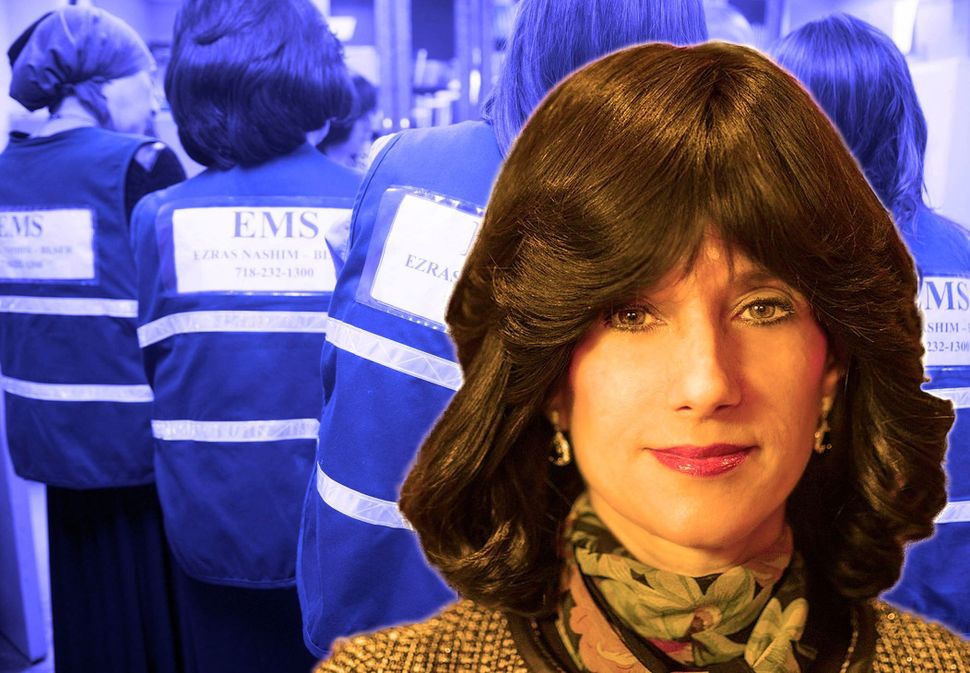 Many people assume that the hardest part of being an Orthodox woman is following the religious code. But it’s not — it’s playing by the social rules.

The new documentary “93Queen” follows Judge Ruchie Freier, a Haredi woman, through the founding of the first all-female Orthodox EMT group, Ezras Nashim, and Freier’s campaign for Civil Court Judge in Kings County, New York. When a group of Hasidic female EMTs went looking for a female Orthodox lawyer to help them organize, Freier answered the call — and eventually became the director and public face of the resulting organization, becoming an EMT and paramedic herself in the process.

For years, Freier has been something of a celebrity in the Orthodox world. Yet troublingly, her accomplishments have often served as a convenient excuse for Orthodox Jews to declare that equality for women has been achieved. As Freier continues to work to improve the lives of Hasidic women, we must also address the deep cultural norms that necessitated her fight in the first place.

In online Orthodox forums frequented mostly by anonymous men, Freier, Ezras Nashim and their allies are the subject of constant ridicule, gossip and outright slander. They are accused of incompetence, of forsaking Torah values and even of murder.

Freier handles these attacks courageously and commendably. She never lashes out at the men who have stood in her way, nor at those who harass her, scream at her and gossip about her in the synagogue. Part of the reason she is able to speak and act boldly while maintaining her dignity is that she is in many ways the Haredi ideal. Religious from birth, she attended the right schools, married at 19 and bore six children, and she supported her husband through years of full-time, unpaid Torah study. She meticulously prepares enormous batches of challah, carefully weighing each strand on a food scale, stuffing her freezer to the brim with home-baked bread. She helps at-risk youth and the poor. She asked permission from her rabbi before appearing in the film.

In “93Queen,” Freier speaks of her respect for feminists, but stops short of identifying as one. When initially approached by Hasidic women who wanted to organize an EMT group, she was skeptical, she said, that they might be “women libbers.” In the film she says, “If you have a life that’s filled with Torah, you don’t need feminism.” Yet time and again, Freier finds her Torah values in conflict with the Jewish powers that be, and uses both her knowledge of Jewish law and her communal clout to fight back. Standing up for the equal strength and abilities of women, going head-to-head with the male heads of powerful institutions, demanding dignity for women who choose to be modest and fighting for women’s equal access to healthcare — all of those are feminist acts.

The words “ezras nashim” mean, literally, helping or assisting women, but they also refer to the women’s section in the synagogue, beyond which women are not permitted to go. Freier’s group pushes these boundaries. But it takes more than just brains and chutzpah to achieve change in the Orthodox community. Freier is privileged and supported. Her husband, as she’ll tell anyone who praises her, raised money for her judicial campaign and supports her work. 55 percent of Hasidic Jews in New York City live in poverty; Ruchie and David Freier‘s home has gilded chairs and granite countertops.

“93Queen” mostly glosses over the economic hardship faced by much of the Hasidic world. Early on, the film introduces Yocheved Lerner, a divorced and remarried balat teshuvah — a woman who grew up secular and later chose to become religious — who shows us around the cramped one-bedroom apartment she shares with her husband and daughter from an earlier marriage. The idea for Ezras Nashim was actually hers — she has served as an EMT for over twenty years — and Freier introduces her as Ezras Nashim’s founder. But Lerner does not have the money, support or community standing that Freier does. After a fight, shown in the film, over whether or not single women should be allowed to serve as Ezras Nashim EMTs, Lerner ends up feeling pushed out of the group. When a fellow Ezras Nashim member privately confronts Freier about her inability to cede control, Freier insists that she’s the one who has sacrificed the most for the organization, that her name is on the line if things go wrong, and that she will continue to make decisions as she pleases. “This isn’t a preschool,” Freier says when the woman suggests trying to make others feel like their opinions matter. Lerner eventually resigns.

As praiseworthy as Freier is, her success suggests a damning indictment: To be heard in Boro Park, a woman needs to be braver, bolder, more committed and wealthier than those who have come before her — and needs to have the willing support of the men in her family. One of Freier’s fellow EMTs, who has four children, shares that she wanted to be a doctor but couldn’t because of her children. This same woman jokes with fellow Haredi women while in a wig stylist’s chair that she doesn’t know why she covers her hair and shaves her head — she just does it because she’s a woman who does what she is told.

By ensuring that women marry early and in most cases are forbidden from using birth control, the Haredi world ensures that a woman’s life becomes consumed by raising children and keeping a home. By granting women only a basic Jewish education, the Haredi world prevents them from making informed decisions. By prioritizing yeshiva study over gainful employment for grown adult men, the Haredi world ensures that most families will live in poverty, with no time to think of loftier ideals. Perhaps the most vital reason that Freier has been successful is that she is confident enough in her understanding of Jewish law to declare that she has God’s support: As she says in the film, “God’s endorsement is most important, and I believe we have God’s endorsement.” It’s enough to make a man tremble.

The submissive attitude about which the woman in the wig shop jokes is precisely that against which Freier crusades. A 300-pound woman going into labor on a third floor walkup? We can handle it, she tells a skeptical audience of Haredi woman at an Ezras Nashim meeting. After all, that’s the attitude of Hatzalah, the international — and in New York City, all male — Jewish EMT service that has been working to destroy Ezras Nashim from the beginning. Hatzalah has institutions both sacred and secular in their back pocket, as is clear from the number of community members in the film who fear that helping Ezras Nashim will get them into trouble. And in Hasidic enclaves in Brooklyn, the Haredi men don’t only have the rabbis and Jewish institutions on their side — they also have the funding and support of the city government. In 2010, Hatzalah received a $445,000 grant from the city to update their communications system — and in 2013, Hatzalah’s then-CEO, Rabbi Dovid Cohen, resigned amid allegations that he was implicated in his friend William E. Rapfogel’s alleged theft of $5 million from the Metropolitan Council on Jewish Poverty in a two-decade kickback scheme.

What institutions do the women have?

“Religious women are the busiest creatures!” Freier exclaims in the movie. Indeed they are — and the system is responsible for that fact. “93Queen” provides an excellent portrait of Freier’s work and life, but looks less critically at some of these harsher realities. After watching the film, you’d be forgiven for thinking that the Haredi world is just like the secular world, except that its occupants wear more clothing, have more children, keep kosher and observe the Sabbath.

The film also plays into the tropes that have been wielded against Haredi women by the men of their community, among them that women are ignorant and given to division, distracted by the constant need to tend to children and food preparation. Freier burns a kishka while busy stuffing envelopes for an Ezras Nashim fundraiser. While washing dishes, she laments how much easier her life would be if she had been born a man.

After the second showing of “93Queen,” the film’s director Paula Eiselt shared on Facebook that several Hasidic Hatzalah members attended to show their support for Freier. “They wanted to let her know that the leadership does not speak for them and that there are dozens of other members who are supporting her,” Eiselt wrote. “They are whispering about what they are going to do to help Ezras Nashim.”

“93Queen” ends with Perl Wolfe’s stirring and modern rendition of Eishet Chayil, or “Woman of Valor.” Though the song is sung every Friday night in many observant Jewish homes, the woman it describes is radical. She is hardworking and provides food, clothing and housewares for her family, but she is also an investor, a vintner, a businesswoman, physically strong, wise and outspoken. The song concludes, “tnu la m’pri yadeha, vi’yaheleluhah bashearim maseha” — “give credit to her for the fruit of her labours, and she’ll be praised at the gates for her work.”

The women of Boro Park sustain the community. They cook for it, they raise the children, they run the households, many of them doing so while supporting their husbands’ full-time Torah study. It’s about time that these women were allowed to take their health and their modesty into their own hands — but how many of them even have the time to do so?

Ruchie Freier does. And she prays three times a day, too — just like the men.