‘Us’ Gives Viewers A Biblical Warning 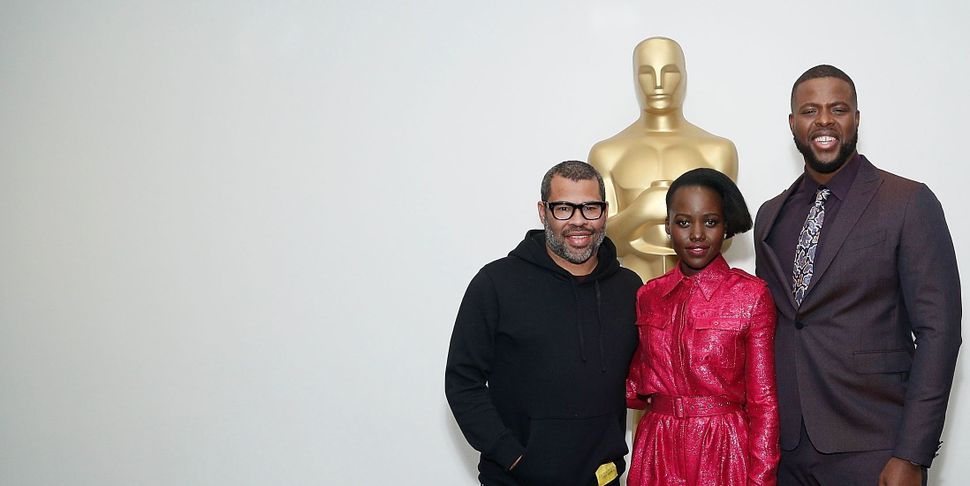 Jordan Peele’s second film, “Us,” all but demands a second viewing.

The box-office-breaking horror flick, while light on its feet, is packed with pop culture signposts, character pay-offs and a script-flipping twist that has audiences lining up for a later showing before the lights come up on the end credits. But one reference that may send the Talmudically-inclined back for more is a conspicuous reference to scripture.

The nod first arrives in a prologue. In 1986, well before the central family, the Wilsons, has to flee and fight a pack of murderous red-jump-suit-clad doppelgängers, its matriarch, Adelaide (Madison Curry in this flashback scene, Lupita Nyong’o in the present) wanders away from her distracted father on the Santa Cruz boardwalk. As the young Adelaide walks towards the beach she notices a longhaired man with a cardboard sign that reads “Jeremiah 11:11.”

Sure enough, the 11:11 recurs. These numerals prefigure the doubling to come and play into the adult Adelaide’s superstition (she later spies the numbers on an alarm clock and, rather than making a wish, takes it as a sign of the bloodbath to come). Put in their original context in Jeremiah, the numbers presage something just as calamitous.

A quick refresher: Jeremiah was a prophet from the sixth century BCE who saw a lot of bad stuff go down. His hits include his self-titled book, the Book of Lamentations and the Book of Kings. Jeremiah witnessed the fall of the kingdom of Judah, the destruction of the first temple and the captivity of much of the Jewish people at the hands of the Babylonians. Because he recorded these terrible events, Jeremiah is sometimes referred to as the “Weeping Prophet.”

Jeremiah was weeping earlier than those around him. God told him what was coming — though few cared to listen to his prophet’s secondhand warnings.

11:11 is a tragic verse typical of much of Jeremiah’s writing. It follows 11:10 in which God informs him that the denizens of Jerusalem and Judah were getting a bit lax on the whole “Thou shall have no other gods before me” thing. Having returned to “the iniquities of their first forefathers” the houses of Israel and Judah have broken with God’s covenant by worshipping other gods. The upshot for this lapse in the contract is not good.

”Therefore, so says the Lord: Behold, I bring upon them evil which they shall be unable to escape, and, although they shall cry out to Me, I will not heed them.” – Jeremiah 11:11

We know what came next: death, destruction and exile. In a lesser and less subtle film, we might expect to see Adelaide scrambling for a musty copy of the King James Bible and pinning her finger on this dire message.

Peele is content to leave this information for the viewer to look up herself, if she’s so inclined. For those who don’t, or who are less studied in the Tanakh, the sign still serves a number of purposes. The viewer knows that the message is likely apocalyptic – as one rarely sees an indigent man with a sign citing scripture with news of anything less – and will probably pick up on the fact that, when we see the sign later, it’s held by the same character. As mentioned above, the overall choice in numbers serves as a semaphore for the mirroring theme: Two upright numerals reflected in a colon. But that doesn’t mean the choice was arbitrary.

Those who know the verse can read into its implications, for which there are no clear-cut answers. What covenant has the Wilson family, and all the other families visited by their ghastly shadows or “tethers,” forsaken? Why won’t God listen?

I have my own pet theory, and I’ll posit it here while stressing that it is simply my own takeaway. Fair warning, this theory requires some spoiler-y info to relate effectively.

The compact being broken is a social contract that recognizes and supports the millions of unseen and unheard Americans in need. In Peele’s gory fantasia, a population of mute clones that reside in below-ground tunnels across the United States represents these millions. And it’s no coincidence that a homeless-looking man – the sign dude – has insight into their maneuvers.

This breach of our obligation to those less fortunate is visible in the first frame of the film, in which we see an ad for “Hands Across America,” the grandly ambitious and largely failed 1986 stunt to join Americans from coast-to-coast in a wall of shared humanity. (It was meant to draw attention to American hunger and homelessness – it failed to raise its $50 million target from the $10-35 fee to reserve one’s spot along the chain).

“Hands Across America” is echoed, again, in the closing moments of the film in which we see an unbroken stretch of people – all in red, having emerged from subterranean shelters and, we presume, killed their more prosperous doubles – cutting a line through the forested hills.

So, the reckoning foretold by Jeremiah did come to be after all. Only it came not from on high, but down below, where none of us thought to look.

‘Us’ Gives Viewers A Biblical Warning