The Jewish Response To ‘Get Out’? It’s Complicated. 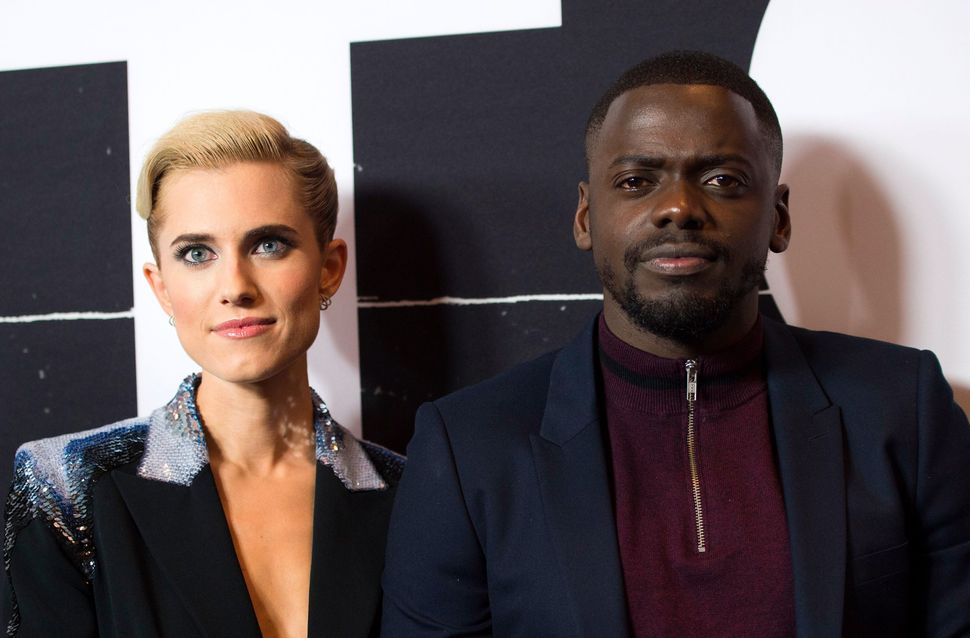 Allison Williams and Daniel Kaluuya, stars of “Get Out.” Image by Getty Images

The next movie I plan to see is Jordan Peele’s horror film, “Get Out.” That’s both because it’s supposed to be amazing, and for another, more specific reason: I wrote my doctoral dissertation on how fictional intermarriage plots have been used to tell broader stories about identity. A horror story about a black man (Chris) dating a white woman (Rose) from a seemingly very accepting family seems… different from the (19th-century French) stories I wrote about in the particulars, but like one whose themes I’d find familiar.

There are, however, a couple of Jewish interpretations of “Get Out” already published, and they’re worth taking a look at side by side, for reasons that will soon become clear. In Tablet, Liel Leibovitz offers an analogy between “Jewishness” and “blackness”. Leibovitz identified, it would seem with Chris:

It didn’t take long for me to learn the same lesson Chris does in the movie, namely that the point of this new strain of toxic liberalism isn’t really to help victims of racism or anti-Semitism or any other sort of discrimination; rather, it’s to reconfigure the identities of white people so that they may go on and enjoy the same exact comforts to which they’re accustomed.

Meanwhile, in New York Magazine, Anna Silman interviews interracial couples who saw the movie, about their experiences. One couple is “Jordana, Jewish, 26, and Tarek, North African, 27.” While Jordana has, it would seem, identified herself as “Jewish” rather than “white,” it is abundantly clear from both of their responses that in their relationship, Jordana is the Rose, Tarek the Chris. Of a scene involving ostentatiously anti-racist white guests, Jordana says, “I was like, this is literally my family.”

For a movie that is, as far as I can tell, very much not about us, “Get Out” has, via the responses I’ve just mentioned, inspired some food for thought about Jewish identity in contemporary America.

The Jewish Response To ‘Get Out’? It’s Complicated.