You Can Have A ‘Game Of Thrones’ Haggadah For Your Seder The first episode of the final season of “Game of Thrones” arrived Sunday night, and while some are already crying shame at the show’s loss of momentum, the series has picked up the pace on one score: cynical brand tie-ins.

You can now learn the High Valyrian language on Duolingo and use your phrasebook to order a GoT shake and burger at Shake Shack while listening to a playlist on Spotify curated by show runners D.B. Weiss and David Benioff. But with Pesach coming up, promising reunions almost as contentious as those in the Season 8 premiere, can you sing “Dayenu” to a welcome reminder that the houses of Westeros are even more messed up than your own family? Of course you can! And, unlike those other offerings, the reminder comes in the form of an earnest labor of fan-made love.

“The Game of Thrones Haggadah,” while unauthorized, is both a functional Haggadah and a “Game of Thrones”-themed product. Created by the artist Raella Reed Rothman (RRR) the 38-page Seder text can be purchased for $10 online and downloaded onto a device or printed out for your service.

How is this Haggadah different from all other Haggadot? 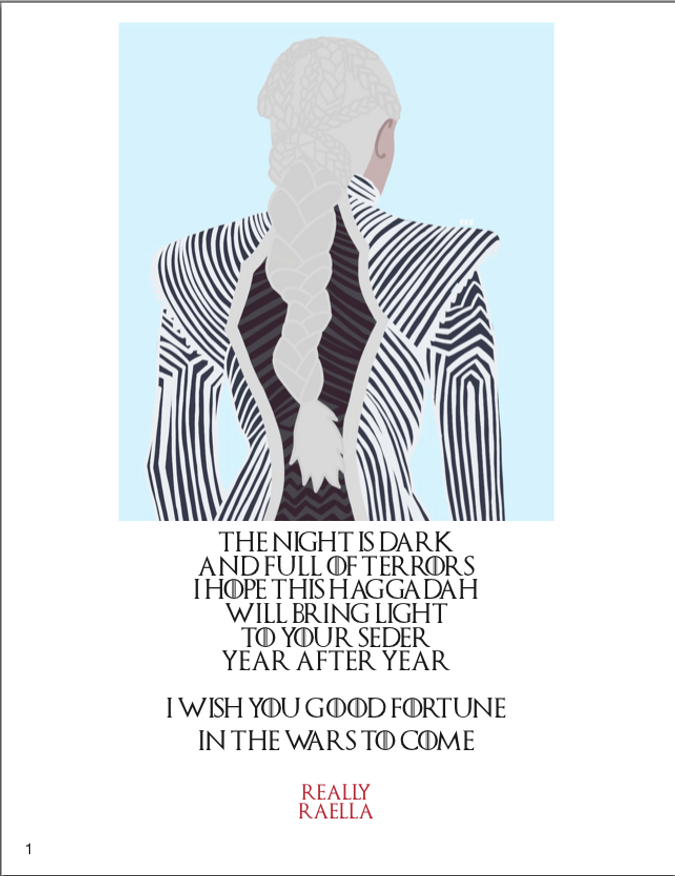 Well, it has “Game of Thrones” characters, rendered in a charming MS Paint-y style, blessing the wine and matzoh. The font is in large caps Roman and has those staves through the Os like the typeface used for the show. Also, in a progressive twist, God’s pronouns are female and She is referred to in the text as “The God of our Mothers” (not Fathers). Keeping with the theme, the Four Sons/Children who need Passover customs explained to them are presented as the Four Daughters. But beyond these changes, the Haggadah is pretty conventional. 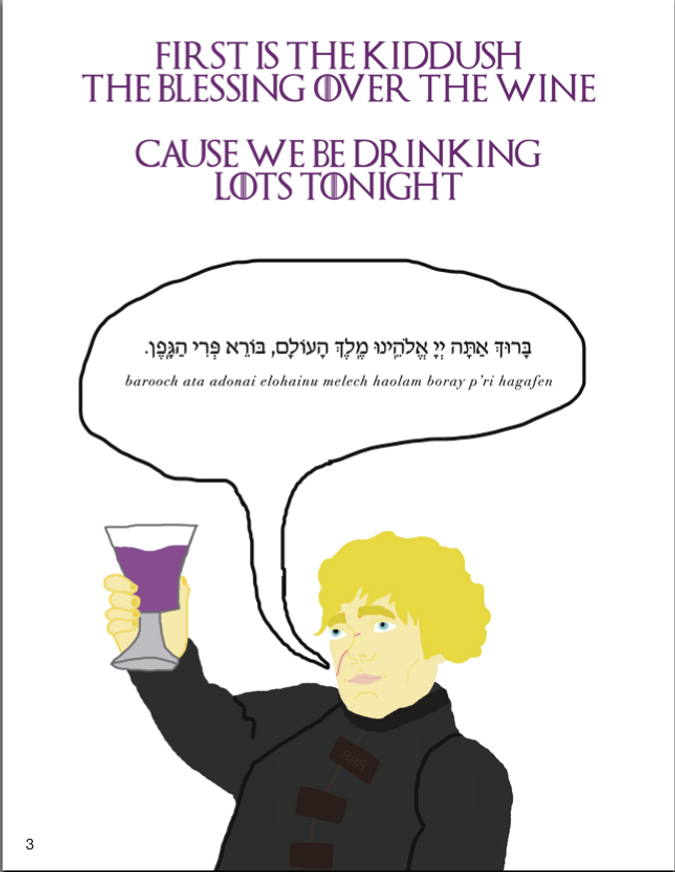 In fact, the Haggadah could be better matched to the series and its characters in places. One wonders for instance why Hodor, a character who can only say “Hodor,” was not cast in the role of the child who is unable to speak? (Rothman puts Arya in that part to keep the Daughters thing going.) And why have Khal Drogo stand in for the plague of wild beasts when we have dragons, dire wolves or a character called “The Hound” at our disposal? 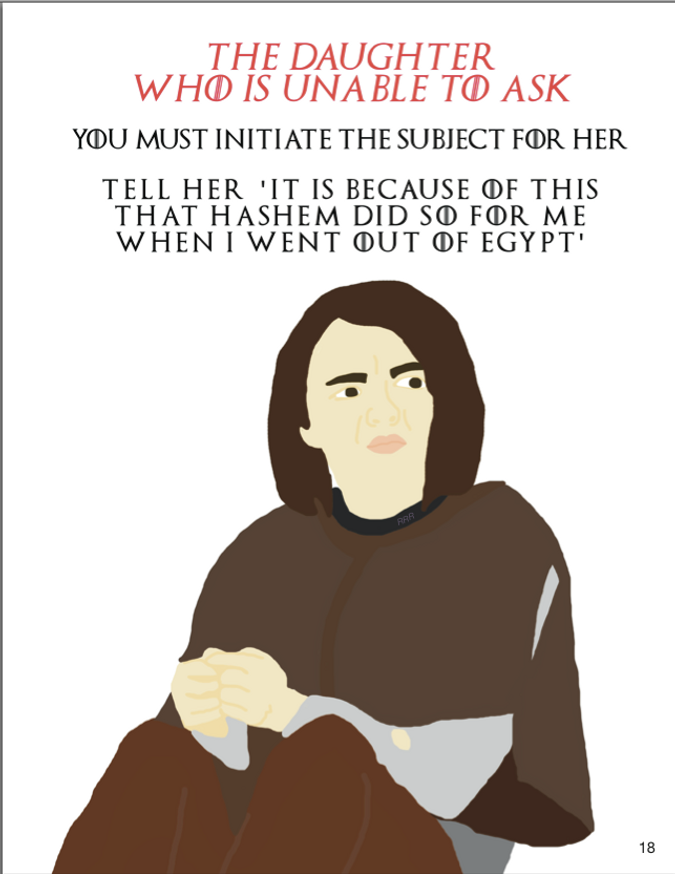 As properties go, “Game of Thrones” isn’t the most Jewish (Maxwell House’s “Mrs. Maisel” Haggadah better fits the bill), but on Passover it’s not too hard to find biblical parallels.

Like a certain prophet, Daenerys Targaryen was sent away from her home as an infant because a king wanted all of her kind dead. She lived in exile and married within another tribe she would soon lead in a movement animated by the liberation of slaves. Dany may not have a magic shepherd’s staff, but she’s quite familiar with things that burn (bushes among them — also people) and stepping up to despots to demand the release of those in bondage. 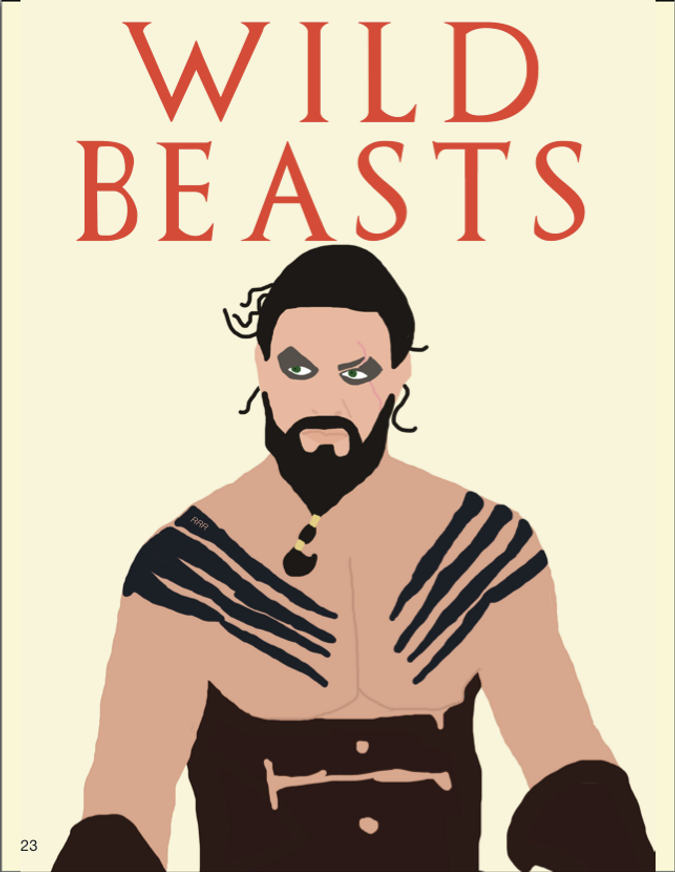 Khal Drogo as the plague of wild beasts in “The Game of Thrones Haggadah.” Image by Copyright RRR 2019 @1stopraellashop www.raella.com

While the Mother of Dragons/Breaker of Chains has lost her way in the Moses figure department in subsequent seasons (this Haggadah’s from 2015) there’s certainly a lot more that can be done to mesh her story with that of Exodus. That might be pushing into sacrilege territory a bit, but it’s definitely something to work with.

And knowing what we do now about Jon Snow’s secret family history and his leadership material – never mind how he’s now well positioned to advance his people through a sea of melted ice wall and reanimated corpses – he might well be the kingdom’s best hope for a successful escape from a growing existential threat.

Maybe it’s time for an updated Haggadah that takes these concerns into account. The show may be ending, but the book series is far from finished. 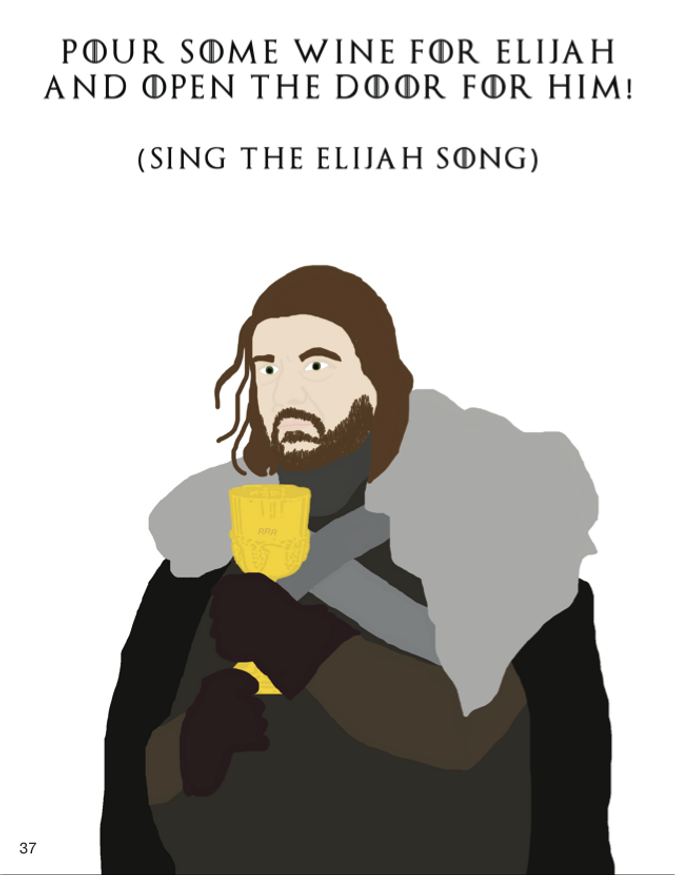 Should George R.R. Martin gets his act together and publish “The Winds of Winter” by next Passover, he will fulfill many a fan’s Seder wish: Next year in King’s Landing.

You Can Have A ‘Game Of Thrones’ Haggadah For Your Seder