In ‘The Other Story,’ a tale of forgiveness as faith and family collide 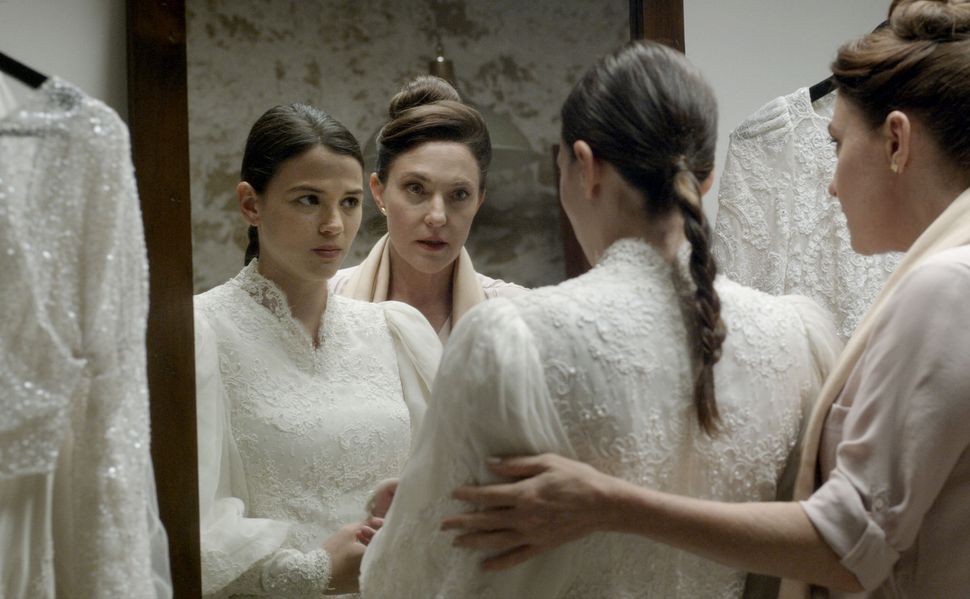 Joy Rieger and Maya Dagan in ‘The Other Story.’ Image by Iris Nesher

_Author’s note: ‘The Other Story’ is playing September 28 as part of the Marlene Meyerson JCC’s online “Forgive Me Film-a-thon.” Marking the occasion, we’ve republished our review from July 1, 2019._

When children leave the insular world of Haredi Judaism, many parents sit shiva for them. Some choose to not even speak the child’s name once they’ve left the fold. When children exit the secular sphere of their parents, the shock to the system is often no less pronounced and may be more punctuated with denial – even among those who fancy themselves progressive.

Israeli director Avi Nesher’s 2018 film, “The Other Story,” playing as part of the Marlene Meyerson JCC’s “Forgive Me Film-a-thon” on September 28, presents case studies of two women on opposite sides of Orthodoxy. The first, Anat (Joy Rieger), is the child of a secular parents; she found God with her musician fiancé, Shachar (Nathan Goshen), after living a wild life of sex and drugs. The second woman, Sari (Avigail Harari), was raised Orthodox and is now dabbling in a pagan cult to the goddess Asheroth, bucking the patriarchy of her early life to celebrate female empowerment.

The two are brought together by Anat’s absentee father, Yonatan (Yuval Segal), a psychologist who is providing marriage counselling for Sari and her husband, Rami (Mayaan Blum). At issue is the the welfare of the couple’s young child, who is reported to be involved in furtive nighttime rituals attended by Sari. Yonatan involves Anat in the case in the hopes of regaining influence over her and convincing her to leave Shachar and her faith.

There’s a lot packed in here, in case you couldn’t tell – and I haven’t even touched the subplot of the looming fraud case that Yonatan faces back in America or Shachar’s continued opioid abuse. Somehow, though, Nesher and his co-writer, Noam Shpancer, make it work. Because the film is so dense with plot machinations, every detail – including a literal Chekhov’s gun – has a payoff. The thematic thrust of how parents and children harm one another and the lasting effects of inculcation unify the proceedings, which are anchored by sharp character development and incredible performances.

As Anat, Rieger exudes a righteous bullheadedness tempered by a newfound devotion and makes these qualities seem of a piece. Maya Dagan as Anat’s outspoken mother, Tali, and Goshen’s Yonatan are painfully believable in their squabbles as resentful exes brought together over concern for their only child. As Yonatan’s father, fellow psychologist Shlomo, the 71-year-old Sasson Gabai, of “The Band’s Visit” fame, capably delivers the film’s thesis while in a hospital recovering from a stumble: “When a child is born, two children are actually born: the one you hoped for and the real one.”

That idea is echoed in a handful of jarring sequences in which Yonatan imagines situations escalating to extremes out of his recent fatherly concern. At one point when he and Anat cross into East Jerusalem, he imagines a group of Palestinians pulling semi-automatics from behind their backs as Anat approaches them. In another instance, he conjures a vision of Anat hurling herself off the roof of her midrasha. Ultimately, both he and Anat learn to not assume the worst. But in the case of Anat, who learns to be less rigid with the truth when love and family are involved, the takeaway feels unearned. (The circumstances surrounding this epiphany, related as they are to her father and grandfather’s work, are also almost certainly professionally unethical as well).

The film ends with looming ambiguities, but hope prevails as the tensions of family and faith are accepted as complex, though not beyond repair. The premise shows that transition from one extreme way of life to another is not blithely made and that making a clean break from a painful past is impossible – and even dangerous.

The title of “The Other Story” is derived from a song written by Shachar, who spends the movie playing his music to secular crowds in an attempt to connect his sinful past with his faithful present. These narratives can not be so clearly delineated. We may not be able to forget where we came from, but we can forgive ourselves and those around us for the pain of our own backstories.

In ‘The Other Story,’ a tale of forgiveness as faith and family collide