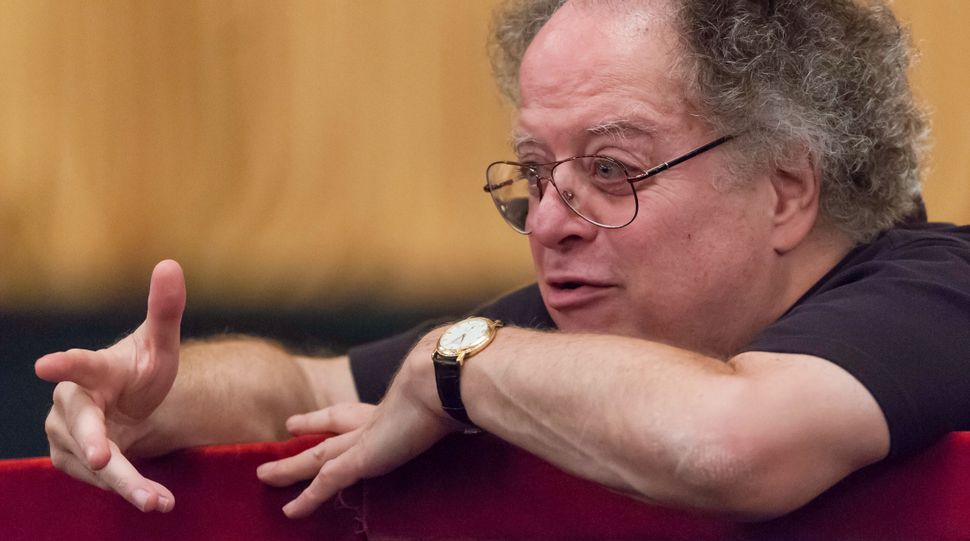 By now, the question is familiar: How should those who distribute and consume art deal with the artistic legacy of someone accused of sexual harassment and assault?

And next: How should that calculation change if that person created their art through collaboration with others, who are presumably innocent of their colleague’s alleged crimes?

That question haunts the case of James Levine, who was the Metropolitan Opera’s music director from 1976 to 2016, and until December 3, when he was suspended, that company’s music director emeritus.

So far, four men have come forward to accuse Levine of grooming them when they were adolescents and then sexually abusing them. In the wake of the first reports of those allegations, his fans have begun to grapple with how they should now treat his work.

(The New York Times quoted Levine as writing, in a statement addressing the accusations against him: “As understandably troubling as the accusations noted in recent press accounts are, they are unfounded. As anyone who truly knows me will attest, I have not lived my life as an oppressor or an aggressor.”)

My parents started taking me to operas when I was in elementary school; in college I began seeking them out on my own. As I neared graduation, I dreamed of living a life like the one my mother lived in New York in her twenties, when she scraped by on a meager journalist’s salary but indulged in cheap seats at the Met. Even before fulfilling that dream, my taste was shaped by Levine’s industry-wide sway: I loved the singers he selected, the composers whose work he championed, and his oft wondered-at musical sensibility. I want to be able to condemn the way he allegedly treated his victims without revising the love I’ve felt for the music his influence brought to my ears.

Is that possible? In The New York Times, Anthony Tommasini pondered the question of what to do with a beloved box set of Levine-led Met recordings, wondering “how do Mr. Levine’s countless fans, and I as a critic, reconcile his legacy with what he’s been accused of? Is his work tainted beyond our ability to appreciate the artistry involved?”

“I’m struggling with this whole James Levine thing in a selfish selfish selfish way,” a friend, also a classical music-lover, wrote to me. She’d once seen Levine conduct an open rehearsal of Mahler’s 9th Symphony with the Boston Symphony Orchestra. “What I was amazed at was how much he connected to the musicians,” she continued, “But now it all feels so wrong.”

We both hail from Denver, and grew up on the classical programming of Colorado Public Radio; on December 4, that station announced in a statement that they would stop airing any recordings that Levine had conducted.

Yet Levine’s oeuvre of recordings and filmed performances are not Levine’s alone. They are those of the composers whose work he interpreted and the singers, solo musicians and orchestras who performed under his direction. They are those of some of the greatest contemporary performers in classical music: Kathleen Battle, Placido Domingo, Renée Fleming, Itzhak Perlman, Anna Netrebko and Evgeny Kissin, among scores of others. They are those of little-performed works and composers: John Corigliano’s “The Ghosts of Versailles,” Giacchino Rossini’s “Semiramide,” Samuel Barber and Franco Zeffirelli’s “Antony and Cleopatra.”

What’s more, films of Met performances, many of them conducted by Levine, are one of the few outlets that make opera, which is expensive to see live and difficult to find outside of larger cities, accessible. Hector Berlioz’s remarkable “Les Troyens” is rarely mounted in full due to its exceptional length; last year’s production at Chicago’s Lyric Opera was nearly five hours. Yet an opera lover in South Dakota, where few operas are staged, can stream a video of the Met’s 1983 Placido Domingo-led production, directed by Levine, for around $5.

Conductors have a surprisingly literal job title. Beyond conducting an orchestra, they serve as conduits, guiding music from notation on a page to the ears of an audience. As the Met’s music director, Levine exerted control over the company’s repertoire as well as its choices in terms of which singers to feature. Those choices, given the Met’s status as one of the world’s leading opera companies, were internationally significant. Working with Levine became a marker of status for artists both aspiring and established.

That precise status allowed Levine the opportunity to engage in the offenses of which he is accused. His four accusers have remarkably similar stories: They met him in their adolescence or early 20s while they were studying to become musicians or conductors. In each case, the men say, Levine started grooming them in individual meetings about their musical ambitions. Levine met Ashok Pai, the first man to publicly accuse him of sexual assault, at Chicago’s Ravinia Festival in the 1980s. Levine’s relationship with that festival ended only last week, when it cut ties with him following reports of the allegations against him.

While rumors about Levine’s sexual conduct existed in the classical music community for years, his status apparently dissuaded those within that community from seriously investigating his conduct. As USA Today reported, a detective alerted the Met to an Illinois investigation into Pai’s accusations against Levine in October, 2016, yet the company declined to undertake any independent investigation into Levine’s alleged misconduct.

Did the Met, Ravinia Festival, Meadow Brook School of Music in Michigan — where Levine is alleged to have met and assaulted three of his accusers — and the other classical music organizations with which he held prominent positions profit from his work while turning a blind eye to allegations of his misconduct? If so, they are implicated in his alleged wrongdoing. Even absent that direct responsibility, the power structures that maintained Levine’s long reign at the Met are notably exclusionary; as Justin Davidson wrote for Vulture, during Levine’s tenure the company hired “just four female conductors and performed exactly one opera by a woman composer.”

Yet a similarly indubitable fact is that for four decades, there was almost no way for an opera singer to achieve prominence without receiving Levine’s stamp of approval. He was an arbiter of operatic culture; to reject the breadth of lasting work he produced in that time is to deal a serious blow to that already-suffering art form, as well as those who love it. Doing so also, inevitably, means rejecting the work of innumerable artists who at some point worked with Levine. The artists whose professional success depended on working with him, unlike the organizations that employed him, should not be held accountable for his actions.

Netflix removed Kevin Spacey from “House of Cards,” but the series will continue without him. Before Leon Wieseltier was publicly accused of sexual harassment and assault, he was about to launch a new cultural journal; that publication’s funders, the Emerson Collective, suspended all work on it, erasing the efforts of not only Wieseltier but also of his five employees. Harvey Weinstein’s name is being scrubbed from the upcoming television projects he oversaw, but Amazon scrapped an untitled forthcoming series, produced by David O. Russell, that was co-financed by the Weinstein Company. (The creators of that series are now suing the Weinstein Company for over $2 million in damages.

There is no such solution for Levine. Prominent as they were, Spacey, Wieseltier and Levine were not the linchpins of their fields. In the latter half of 20th-century opera, at least in the United States, Levine was close to being the linchpin of his.

The suffering of Levine’s accusers is the greatest tragedy created by his alleged actions: “I don’t know why I got so depressed,” Chris Brown, one of Levine’s accusers, told The Times. “But it has to be because of what happened.” A secondary tragedy faces opera’s artists and fans. For many, their passion for the form was shaped by a man now accused of doing horrible things to young men who aspired to learn from him. How must they re-evaluate that passion, and the seminal works that have fed it, in the wake of that revelation?

It’s a morally difficult calculus; neither option is obviously right, nor obviously fair. I would like to see Colorado Public Radio continue to play Levine’s recordings, but do so in the midst of an earnest and painful conversation about opera’s future. I think we ought to let ourselves enjoy the great operatic output Levine oversaw so long as we also vocally, insistently agitate for change. By dint of opera companies’ financial instability, they’re beholden to their audience. The Met’s accountability depends on the scrutiny, evaluation and informed demands of those who love it. It is our job to speak up, not to walk away and let the whole thing rot.