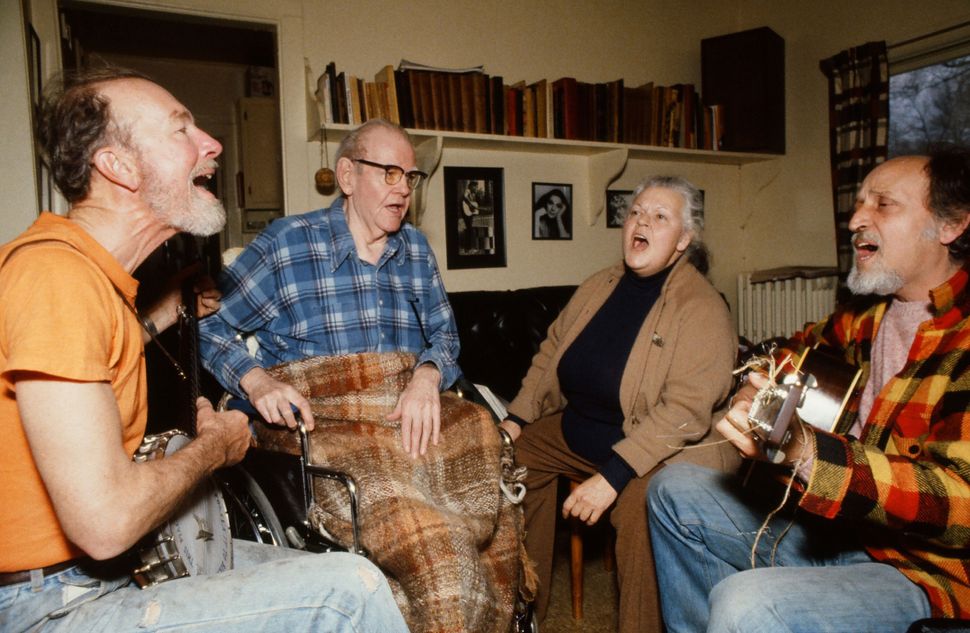 Circa 1980, The Weavers prepare for their reunion. Image by Getty Images

The Weavers, an American folk music quartet, sold millions of records in the late 1940s and early 50s. Its two Jewish performers, Ronnie Gilbert, Fred Hellerman, were joined by two non-Jews, Lee Hays and Pete Seeger. In the 1960s, Bernie Krause, another American Jewish singer, replaced Seeger in the group. Their hits included “Goodnight, Irene” and “Tzena, Tzena, Tzena,” the latter an Israeli song by Issachar Miron. The group’s success was interrupted during the McCarthy era by accusations of Communism from the House Committee on Un-American Activities (HUAC).

A new book from Da Capo Press, “Wasn’t That a Time: The Weavers, the Blacklist, and the Battle for the Soul of America” focuses on their travails. Its author, Jesse Jarnow, is a musician, radio DJ for WFMU in Jersey City, and author of a previous study on indie rock. Jarnow recently spoke to The Forward’s Benjamin Ivry about the Weavers and their musical goals.

The Forward: The guitarist and songwriter Fred Hellerman (1927 –2016), born in Brooklyn to parents of Latvian Jewish origin, suggested the name for the group. He was inspired by a 19th century play by Gerhart Hauptmann, “The Weavers,” about an uprising of laborers in Silesia. The play was translated into Yiddish by Pinchas Goldhar and became a hit on the Lower East Side in the 1920s. Why did Hellerman want to evoke Hauptmann’s play?

Jarnow: Fred saw the play in a college class. He identified with some aspects of the play. They liked the sound of the words, “The Weavers.” They liked the idea of a synthesis of things being woven together, which was part of their creative process, of blending songs from all over the world.

You explain that Seeger’s version of “Hey Zhankoye,” a Yiddish song about failed Jewish farming collectives in Crimea, was “unrepentantly Stalinist.” The collective farms, as described by historian Jonathan Dekel-Chen, were propaganda ploys, but Seeger still performed it. Was its catchy tune and lyrics about the “collective farm/ All run by husky Jewish arms” where “Aunt Natasha drives the tractor/ Grandma runs the cream extractor” the attractions?

Pete Seeger liked a good fairy tale. He liked a folk song that seemed like a lesson packed into a nice melody. By the end of his life, he admitted that he had gone a step too far with a song like that.

**Lee Hays was much influenced by the German Jewish poet and Communist Walter Lowenfels (1897-1976), with whom he wrote the song, “Wasn’t That a Time?” likening those who opposed McCarthyism to heroes at Valley Forge and Gettysburg. In 1953, the FBI arrested Lowenfels and charged him with conspiracy to overthrow the U.S. government. Lowenfels bragged that he had spent his life “trying to overthrow not only the government but the universe.” Was it any surprise that the FBI intervened?

Yes, of course [Lowenfels] was inviting [him]self to be investigated by the FBI, but in an atmosphere of surveillance and loyalty oaths and all these completely absurd things. It’s a rhetorical device to expand this all to the higher sphere of the universe. There’s humor there. It’s not just sobriety going on there.

Ronnie Gilbert (1926–2015), born Ruth Alice Gilbert in Brooklyn to a family of Polish and Ukrainian Jewish origin, recalled how her mother, a dressmaker and Communist Party member, took her to hear Paul Robeson sing at an outdoor rally in the Garment District. Robeson told the Yiddish-speaking workers, “Your people and mine are forever connected by our slave heritage.” Was her 1958 tribute album to Bessie Smith inspired by this link between African-American and Jewish experience, or did the music just appeal to her?

I think she was attracted to the music. Bessie Smith was experiencing a critical renaissance at the time. That was the first music Ronnie really fell in love with, outside of show tunes and folk music. Some mainstream jazz magazine asked what a white Jewish woman was doing singing Bessie Smith, and I don’t think the record sold very well.

Did Ronnie Gilbert’s later investigations into herself, earning an MA in clinical psychology in the 1970s, working as a therapist, and living out her identity as Jewish lesbian, enrich her voice, which retained its clarion tones as she aged? Seeger and Hellerman’s voices, never much to begin with, shrivelled into mere wisps with the years.

Right, yeah, for sure. By the time they got back together, Ronnie’s voice was far superior to the others, but of course it always was. I think her work on herself had more to do with the repertoire she was engaging in. She wanted to do new material and update it to the early 80s, which the others resisted. [Her self-development] certainly emboldened her as a musician and might have made her more confident.

Why did Gilbert join the experimental Open Theatre founded by Joseph Chaikin, another Jew from Brooklyn, in 1963? She performed in Viet Rock, a pioneering rock musical and another anti-Vietnam War play, America Hurrah, by Jean-Claude van Itallie, of Belgian Jewish origin. Did the audience participation that Chaikin favored remind her of communal singalongs at Weavers concerts?

I am not sure there is a literal one-to-one connection, but [Ronnie] spoke of how when she discovered the [Open] Theatre, she reconnected with the creative energy she had not felt for a while. She could not but help but think that, when the creative energies were flowing.

“Shalom Chaverim,” was recorded by the Weavers and published in an arrangement by Fred Hellerman. Unknown in Israel, this supposed folk song has been attributed to the Habonim Labor Zionist Youth movement. Its lyrics consist of only three Hebrew words, repeated in a round. It’s simplistic and passive, even for a children’s song. Another Hebrew song Hellerman arranged for the Weavers, “Tapuach Hineni,” is also laid back, as if trying to prove that Israelis could be docile to the point of tedium like everyone else.

I am entertained to learn that Shalom Chaverim is not known in Israel. That’s news to me. Fred had an ear for light pop tunes. That was something he really liked. He was not hard-hitting. He liked folk pop, with dulcet tones. The divide in the Weavers was between hard-line folk music and pop music, and Fred fell into the pop category. There are lots of songs in the Weavers repertoire which are pretty corny. They picked a lot of songs because of the way they sounded, not because of their messages. I don’t think they considered at all what the lyrics of “Tzena, Tzena, Tzena” were when they decided to sing it. It was catchy, with a foot stomp. The fact that it was from Israel was an attraction, but not necessarily what it was saying. I think for them the broader message was that they were pulling songs from different countries, and engaging with music beyond global politics. The Weavers were very much a pop group. They were trying to make accessible music that would go on the media and that people could enjoy.