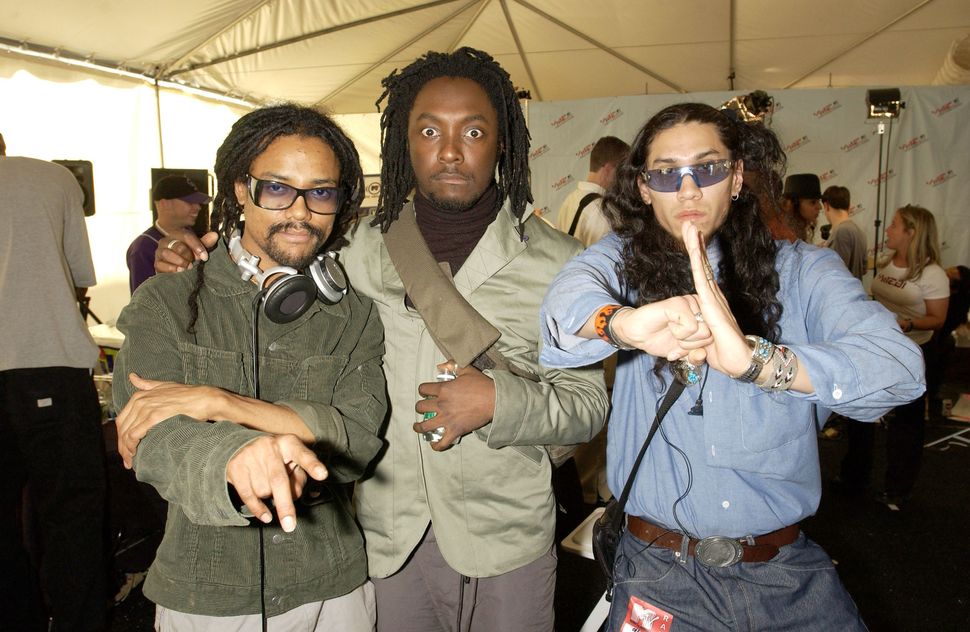 How did a song written by a West Coast hip-hop group, a Catholic pop star and a French DJ become a Jewish anthem second only to the hora?

In 2009, at the height of Black Eyed Peas’ Fergie era, “I Gotta Feeling” was the song of the new century. An uptempo dance song produced by David Guetta, the anthem was revered almost from the moment it was released. The Grammy Award-winner for Pop Performance of the Year and the longest running single of 2009 has been featured in countless commercials, and, as of 2019, holds the record for the most downloaded song in iTunes history at 9 million. In a word, it was massive. It’s been 13 years since; newer artists have brought newer hits. Yet at bar mitzvahs from Tenafly to Tel Aviv, “I Gotta Feeling” is the cheeseball hit that continues to bring the house down.

For starters, “I Gotta Feeling” references the language of our people in the most celebratory Jewish lyric of all time: “Fill up my cup (drink)! Mazel tov (l’chaim)!” When I first heard these words I was confused — my upper-middle class suburban upbringing, Hebrew school education, and deep love for Seinfeld all felt conflicted. This was the lamest thing I could possibly imagine, yet this once cool hip-hop group was referencing our rites of passage? I didn’t get it. Cynically, I wondered, was will.i.am making fun of us?

Scientifically, singing as a group is proven to increase “feel-good chemicals” like dopamine and oxytocin. It’s an example of collective effervescence, a sociological concept that describes the feeling when a group comes together and simultaneously communicates the same thought by participating in the same action. If you’ve seen this song played in its natural habitat (a Long Island bar mitzvah, immediately following the hora, before being seated for the motzi) then you’ve experienced the ecstasy of Jews young and old screaming “MAZEL TOV!” along with the song. Did the Peas have the foresight to predict this? Did will.i.am have a seventh-grade experience replete with Jasons and Joshuas in 1990s basketball player suits and Rebeccas and Rachels in slouch socks?

As you get older and move from the kids table to the marrieds table to the married-with-kids table, perhaps you gain some life experience, perspective and knowledge of history. Perhaps you realize that when you’re Jewish and there are great-grandparents in the room, there has also been great trauma, one we don’t openly speak about. Perhaps on that day you recognize that to be a Jew and to be alive is in itself a challenge that not all succeed at.

What a feeling then to see your grandchild or great-grandchild alive, dancing joyfully at a bar mitzvah. What a feeling, to sing along, to see the fruits of your dreams of survival, together, celebrating in the same room. Did will.i.am have a profound understanding of this, so deeply connected to our experience that he was moved to write a song of celebration in the language of the Jews?

Today, we find ourselves at yet another pivotal moment in history. Auschwitz was liberated 75 years ago. As of 2020, every living survivor of the Holocaust is at least 75 years old; over half will be at least 85. How many years until this trauma becomes invisible? Until it leaves the dance floor and lives on only in our DNA?

In our memories we see four generations of Jews together lighting candles, lifting chairs, eyes glowing. We smell perfume, taste the sweet bitterness of wine, feel arms around our shoulders, laughing, dancing, spinning. Because I love songwriters, I like to think will.i.am anticipated what else we would need. A soundtrack. A song. A good night.

Julie Potash Slavin aka Hesta Prynn is a blue chip DJ, licensed clinical therapist and host on SiriusXM radio, where she explores music as a medium for human connection.