Complicity In Nazi Germany — And Here 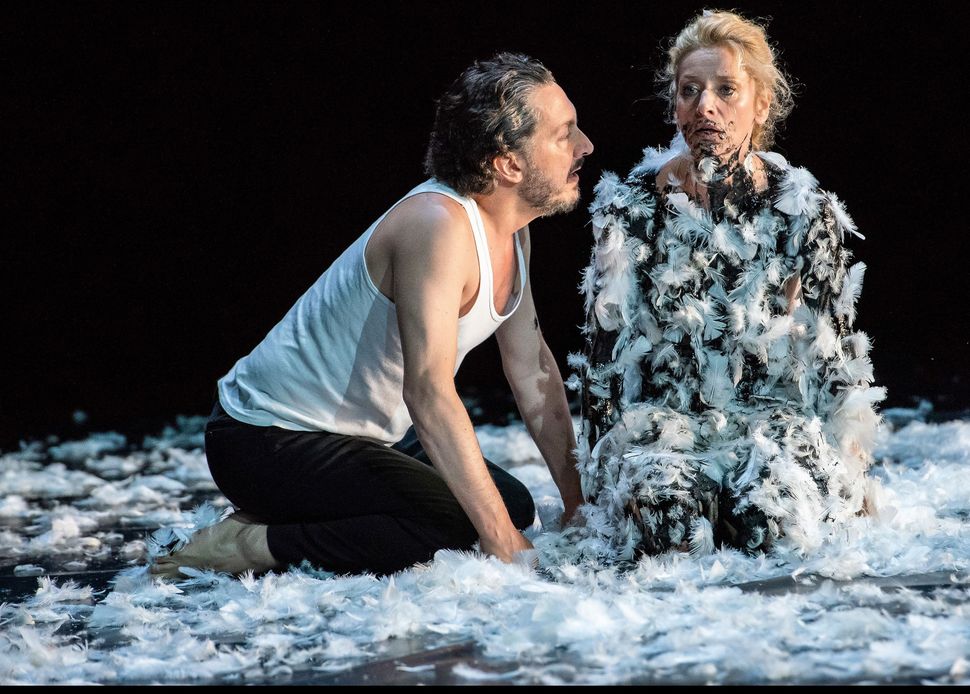 The word “complicit” has become so popular in the first years of the Trump administration that it can register as an empty gesture at a damning concept. Your tax dollars go to separating children from their parents at the border; you are complicit, and what does that mean? How could you change it? You, personally, will likely never see the consequences. The devastated children will not show up on your doorstep. Your role in the drama is distant and obscure.

There are many things to admire about Ivo van Hove’s stage adaptation of the Luchino Visconti film “The Damned,” performed by the Comédie Française at the Park Avenue Armory through July 28, but foremost among them is the efficacy with which the play makes that distant role immediately painful. The play follows a wealthy German family, the Essenbecks, owners and operators of a major steelworks, for an undisclosed period of time following the Reichstag fire of 1933. Most of the family’s members are unsentimental about everything except power, and as the play builds toward its climax, the blasé cruelty with which they treat one another becomes increasingly shocking.

Yet at the same time van Hove’s direction — which involves a crew of cameramen filming the actors as they prowl the open set, with the result broadcast on a large background screen — methodically emotionally alienates the audience from the production. Puzzles are introduced: Why, given that the subjects of the play are German, is the play itself in French? How do those actors confined to onstage coffins early in the play escape them — are they trapped there the whole time? There is always some snag that keeps you from being fully absorbed by the action. When a cameraman turns his camera on the audience, you look instinctively for your own face on the screen. Then you’re mortified that in the midst of the carnage in front of you, you still care about how you look.

Each individual audience member is personally witnessing something excruciatingly violent, a fact the play consistently forces them to remember. The result is an exacting drama of complicity, one in which the audience leaves knowing they were part of the violence, not merely witnesses to it.

This comes through most shockingly early in the play, when a young man named Martin takes prurient interest in his two female cousins, both young children. He escorts one offstage, to a dark passage in which the two hide from searching parents. The scenario is alarming; the audience realizes early that Martin’s motives are clearly not playful. But the moment at which the child with him has that same realization still comes as a shock. He grips her hand and moves it down his chest, her expression shifts from silly to scared, and in the audience, it’s impossible to not be seized with fear. Even as you know that no one would possibly allow a child to be abused right there on stage, right in front of you, you wonder – could they? What would you do? As soon as the line might be crossed, it would be too late to save her.

And of course, she is saved; “The Damned” is painstaking about maintaining a practical propriety. But when Martin preys on a second young girl, with an implied violent end, the audience knows the danger she faces. As Martin pushes new boundaries, no one moves from their seats. They trust the production, but their trust is perilous. 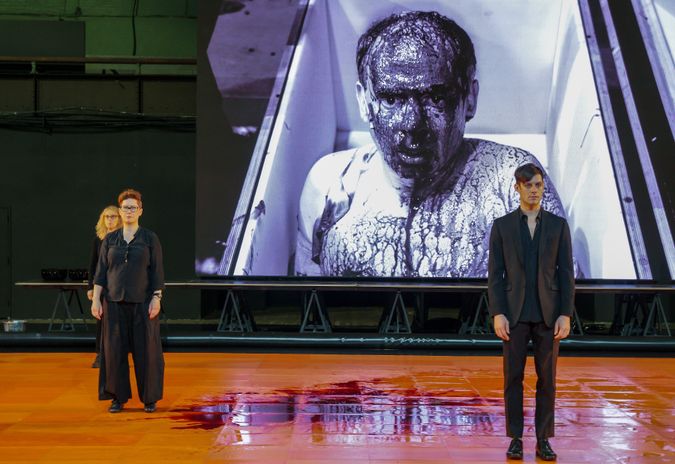 As the stakes escalate onstage, the audience is further implicated. In a bravura, profoundly disturbing sequence, Konstantin, the family’s surviving elder son, engages in a horrifically violent bacchanal with his fellow brownshirts. While only he and one other man appear onstage, in the video on the screen behind them, they are surrounded. They sing belligerently in German, douse themselves in beer, strip naked, violently harass a waitress. Konstantin bites off the other man’s ear. Then he straddles him and sings a rallying song, covered in blood.

At the end of the scene, members of the SS enter and shoot every last man dead. On the screen, blood pools beneath their naked bodies. On the stage, an officer throws a bucket of blood over Konstantin’s. Then, as Konstantin and his companion walk to their coffins, the camera trained on their bloody faces, a crew rolls the rubber flooring toward the front of the stage, as if cleaning up. The process forces the blood forward toward the audience, a wave reaching for the beach. It seems it will escape its bounds, and ooze past the safe boundaries of the stage. They catch it at the last moment, but the message to both Konstantin and audience is clear. To Konstantin: The struggle for power inevitably turns into a struggle for survival. To the audience: You are coming ever closer to being tainted, visibly and permanently.

The work masterfully examines the morally numbing experience of war while keeping its audience perpetually morally alert. Like Konstantin, every character who dies goes to their deaths with a sense of expectation, not quite resignation, but close. Then cameras, embedded in their coffin lids, capture their panic as they realize what’s happened; they scream and contort and sob. The play’s end creates the same effect for its viewers. By the time the gun is pointed at you, as it must be, you expect it. I barely flinched at the ensuing shots, aside from covering my eyes against the powerful strobe lights that accompanied them. It was only afterward that it was clear what that desensitization meant.

Complicity In Nazi Germany — And Here