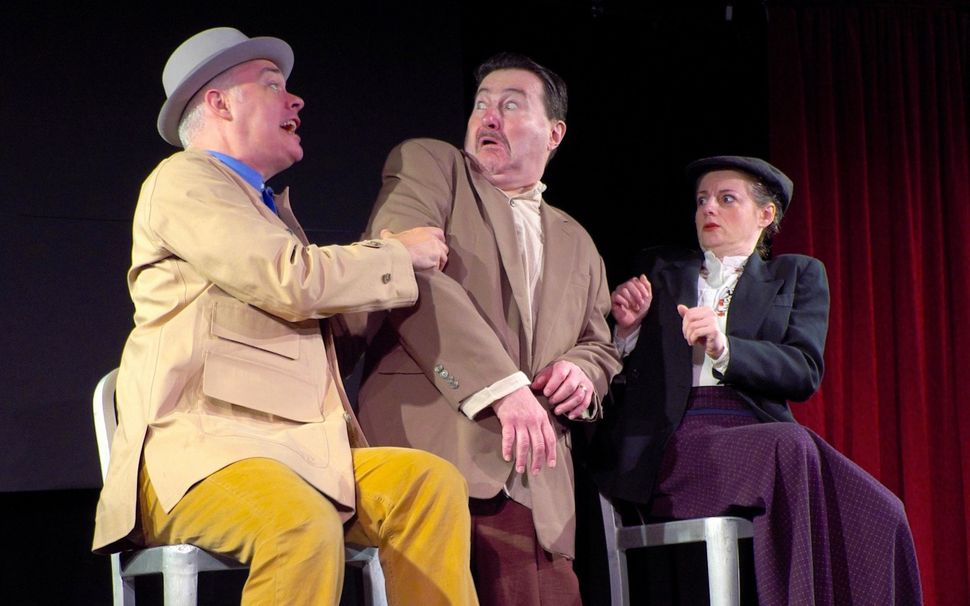 Who would’ve thought that the hottest tickets in town this summer of 2018 would be for two shows adapting the stories of the great Yiddish author Sholem Aleichem? While both are well-executed and deserving of the mostly rave reviews they’ve received, neither is particularly innovative or cutting-edge from a theatrical standpoint. It would be a bit of a stretch to call either one timely, especially in this heated political moment. The raw material is well-worn and familiar. Most or all of the performances are in Yiddish, presumably forcing the vast majority of theatergoers to look back and forth from the stage to supertitles projected on screens. Yet tickets to “Fiddler on the Roof,” performed in Yiddish at National Yiddish Theatre Folksbiene at the Museum of Jewish Heritage, and “Tevye Served Raw (Garnished with Jews),” running at the Playroom Theater in Midtown, are very hard or next to impossible to come by.

In the case of “Fiddler on the Roof,” or “Fidler Afn Dakh” (whose run has just been extended through October 25), there is of course the built-in appeal of seeing a new production of one of the greatest musicals ever written for Broadway. Say what you will about how authentically (or not) the creative team represented Sholem Aleichem’s Tevye stories, or whether or not they misrepresented shtetl life. The fact is they made a brilliant mainstream musical out of the least likely of source materials, one that spoke and still speaks to audiences of all backgrounds and nationalities (remember, it’s big in Japan), and one whose cultural impact went far beyond its status as a hit Broadway musical. At the very least, “Fiddler” helped pave the way for the full-fledged revival of Yiddish culture that followed, including the klezmer revival and the sprouting of Yiddish language programs in colleges, universities, and cultural organizations throughout the world. At best, “Fiddler” offered an accessible, relatable portrayal of a lost world, a glimpse inside pre-Holocaust Jewish life in Eastern Europe that was already threatened by the combined forces of anti-Semitism and modernity, such that not even clinging to tradition – or “Tradition” – could save it.

The novelty or genius of staging “Fiddler on the Roof” in Yiddish (based on a 1965 translation by the Warsaw-born Israeli theater director, Shraga Friedman) only serves to heighten the allure of the Folksbiene’s production, restoring some semblance of authenticity to a show that, as noted, may lack literary and historical authenticity from the get-go. But no matter. This is Broadway, not the History Channel. And even with my only basic acquaintance with the Yiddish language, for most of the time I was able to ignore the supertitles and just listen to the songs and let my inner translator do the work, so familiar are the lyrics, as I assume they are to so many of my generation — the cast recording of the original Broadway show was Top 10 listening in my childhood home and the homes of all my relatives, right up there with Allan Sherman, the Beatles, Bob Dylan, and the cast recording of (gasp!) “Jesus Christ Superstar.”

The much more modest “Tevye Served Raw,” presented by the Congress for Jewish Culture, is in some ways the mirror image of “Fidler Afn Dakh” and makes a perfect companion piece to the latter. (The run has been extended through Wednesday, October 3.) Drawn directly from the writings of Sholem Aleichem, adapted and translated by Allen Lewis Rickman and Shane Baker — who also act in the program alongside the captivating Yelena Shmulenson — the evening of entertainment does exactly what its title promises. Through a series of skits mixed with readings, narrative, song, and comedy, the theatergoer is immersed into the folk world of Sholem Aleichem. We meet a variety of characters in addition to Tevye, including “Strange Jews on a Train” and “The Yiddish Sisyphus.” We are introduced to Sholem Aleichem’s genius with the Yiddish language in numbers that not only use supertitles but also others that cleverly employ live English-language interpretation. The program doesn’t hide its awareness that a few blocks to the south, the Broadway-ized version of Sholem Aleichem’s Tevye stories are being staged; it offers an alternative version (or, perhaps, the “more authentic” version) of the heartbreaking scene in which Tevye and Golde plead with a Russian Orthodox priest for the return of one of their daughters.

What accounts for this renewed creative interest in presenting the works of Sholem Aleichem and the audience’s ravenous appetite for gorging on them? One suspects nostalgia, for one, although this time around, it’s as much nostalgia for the 1964 Broadway musical “Fiddler on the Roof” as it was originally for the culture of the Old World itself. Mix in a little pride over the musical’s enduring and well-earned success, and an increasing comfort with and interest in the Yiddish language itself — in no small part due to the efforts of organizations like the National Yiddish Theatre Folksbiene to bring Yiddish back to the stage.

But more than all that, one has to credit the dance between the Yiddish language and the world of Sholem Aleichem itself. In the characters of Tevye, Golde, and others, Sholem Aleichem invested the perfect balance of the particular and the universal – individuals who were firmly rooted in shtetl Judaism yet facing challenges to which readers and viewers of all types can relate, struggles that go back at least as far as the Bible and which are as immediate as today, when we desperately cling to some sense of order in our worlds, order that seems on the brink of destruction or extinction or even worse.

We are all Tevye and Golde, and only in Yiddish do we truly make any sense.