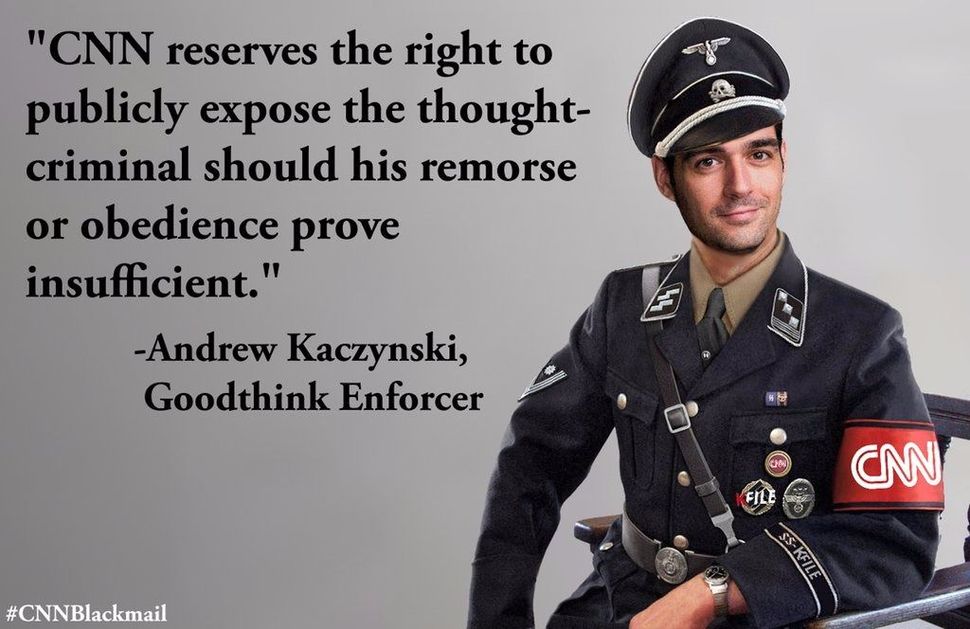 Kaczynski’s head was photoshopped onto the body of an SS officer. Image by Twitter

“Alt-right” Twitter has responded to the Trump-wrestling-CNN-meme controversy by photoshopping CCN reporter Andrew Kaczynski’s head onto an SS officer and referencing George Orwell’s “1984.” The reaction comes on the heels of CNN reporter Andrew Kaczynski writing that his organization could release the name of the man who created the meme if he continues making racist and intolerant memes.

In Kaczynski’s article documenting how he found “HanAssholeSolo,” the meme creator, he wrote that because Mr. Solo had apologized, “showed remorse,” and promised to not repeated his “ugly behavior,” CNN would not publish his name. But then Kaczynski wrote this: “CNN reserves the right to publish his identity should any of that change.”

Twitter erupted with anti-CNN memes, with some users calling for #MemeJihad and others photoshopping Kaczynski’s head onto the body of a Nazi SS officer. And the hashtag #CNNisISIS is popular again.

Kaczynski responded by tweeting that his line only meant to note that CNN had not made any specific agreement with HanAssholoSolo concerning his identity. People across the political spectrum agreed that, at the very least, Kaczynski’s statement was poorly worded. HanAssholeSolo, for his part, apparently called Kaczynski to say he had not felt threatened.

One thing’s for sure: If Kaczynski were Jewish, the “alt-right” response would make the current “backlash” look like a parking ticket.