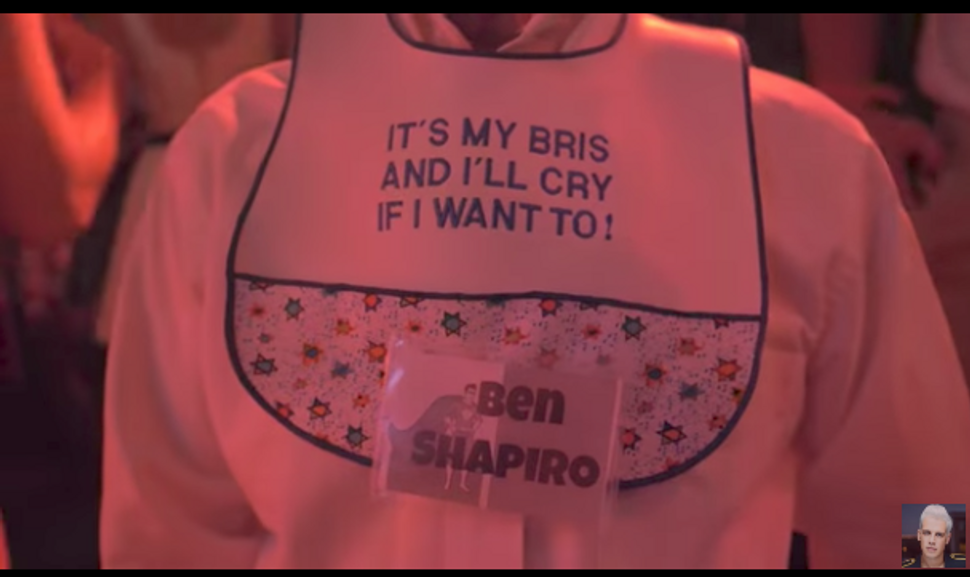 The bib on a dwarf impersonating Ben Shapiro. Image by youtube

Yiannapoulos used the dwarfs to ridicule Ben Shapiro, the editor of the conservative website The Daily Wire, at a Thursday night shindig for his new book “Dangerous.”

The dwarfs wore “Ben Shapiro” name tags and bibs that read “It’s my bris and I’ll cry if I want to” at the party.

The two onetime Breitbart.com colleagues are locked in a bitter feud that has pitted Shapiro, a conservative, against Yiannapoulos, a central figure of the ‘alt-right.’

Shapiro resigned as editor-at-large of Breitbart.com, last year over its handling of a Breitbart reporter’s allegations of sexual assault by Trump campaign manager Corey Lewandowski. Yiannapoulos and others saw that as a betrayal of Trump and his acolyte Steve Bannon. Yiannapoulos also left Breitbart in February after making approving comments about sex between men and under-age boys.

The Lower East Side party also featured a dunk tank with a Hillary Clinton impersonator in the hot seat, and strippers who began their routine in floor-length burqas.