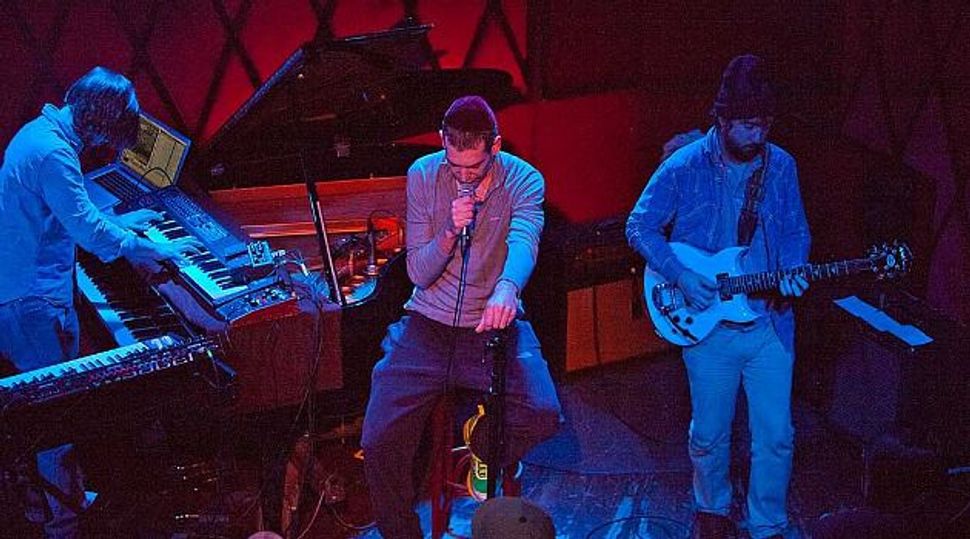 New Path: Matisyahu had fans pleading for his hits at a recent New York gig. But the reggae star is moving in a different direction after shaving his beard and giving up on the Hasidic lifestyle. Image by Derek McCabe

(JTA) — Jewish reggae star Matisyahu is seen in a video pushing two teenage athletes off the stage at a concert in Alabama during the opening ceremony of the JCC Maccabi Games.

The incident took place Sunday night at the University of Alabama at Birmingham’s Bartow Arena, The Jerusalem Post reported.

Some two dozen Maccabi athletes joined the singer onstage during his concert and were not stopped by security. But when one of the teens knocked off Matisyahu’s hat he became angry, the Post reported, citing an attendee. The video shows the singer shoving two people off the stage into the front row, and pushing a third teen toward the back of the stage.

Several attendees tweeted about the incident. Matisyahu has not responded.

In a statement to the New York Post’s Page Six, the JCC Association of North America wrote: “We are disappointed and dismayed that our opening concert performer, Matisyahu, forcibly removed some of our teen participants from the stage, and we will cooperate with any police investigation. Violence is never acceptable … This is contrary to what we instill in our participants and in what we believe. We are relieved that the participants involved were not seriously injured.”

Hundreds of Jewish athletes aged 13 to 16 from JCCs throughout the United States, along with delegations from Israel and Ukraine, gathered this week for the games.